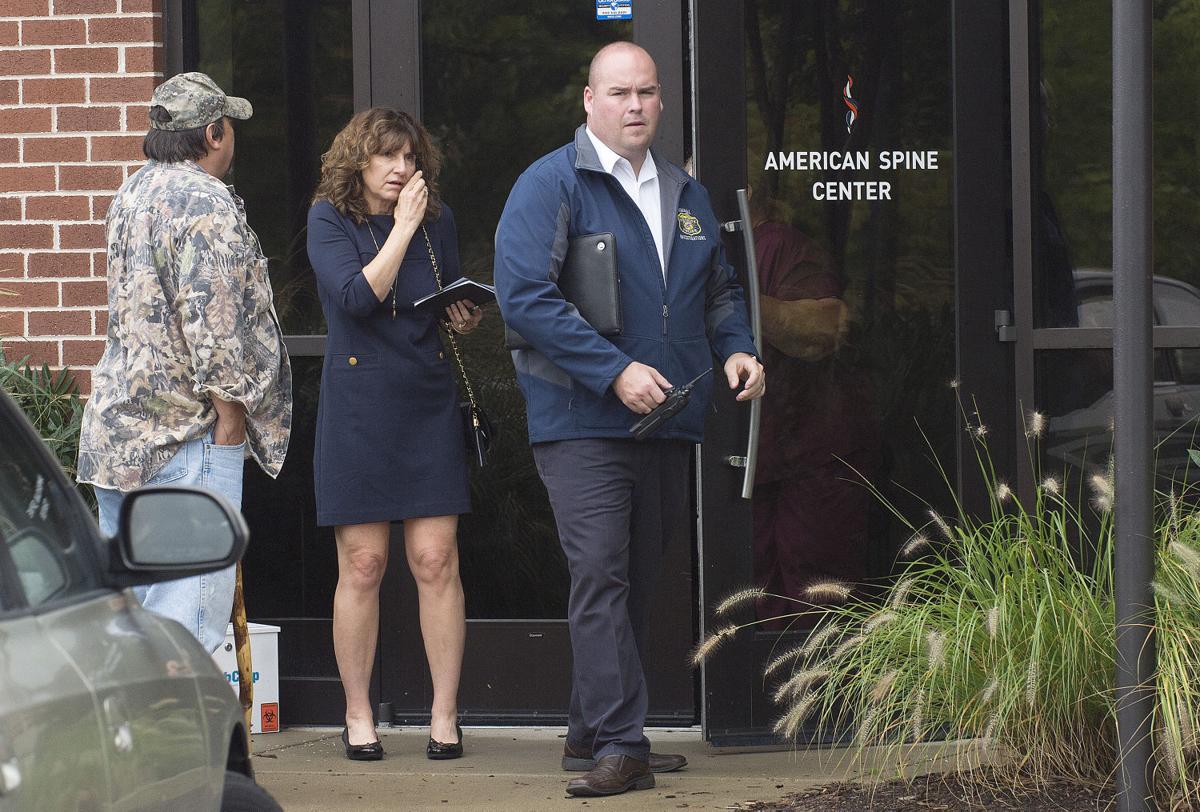 Police investigators walk out of the American Spine Center on Sept. 30 in Frederick. 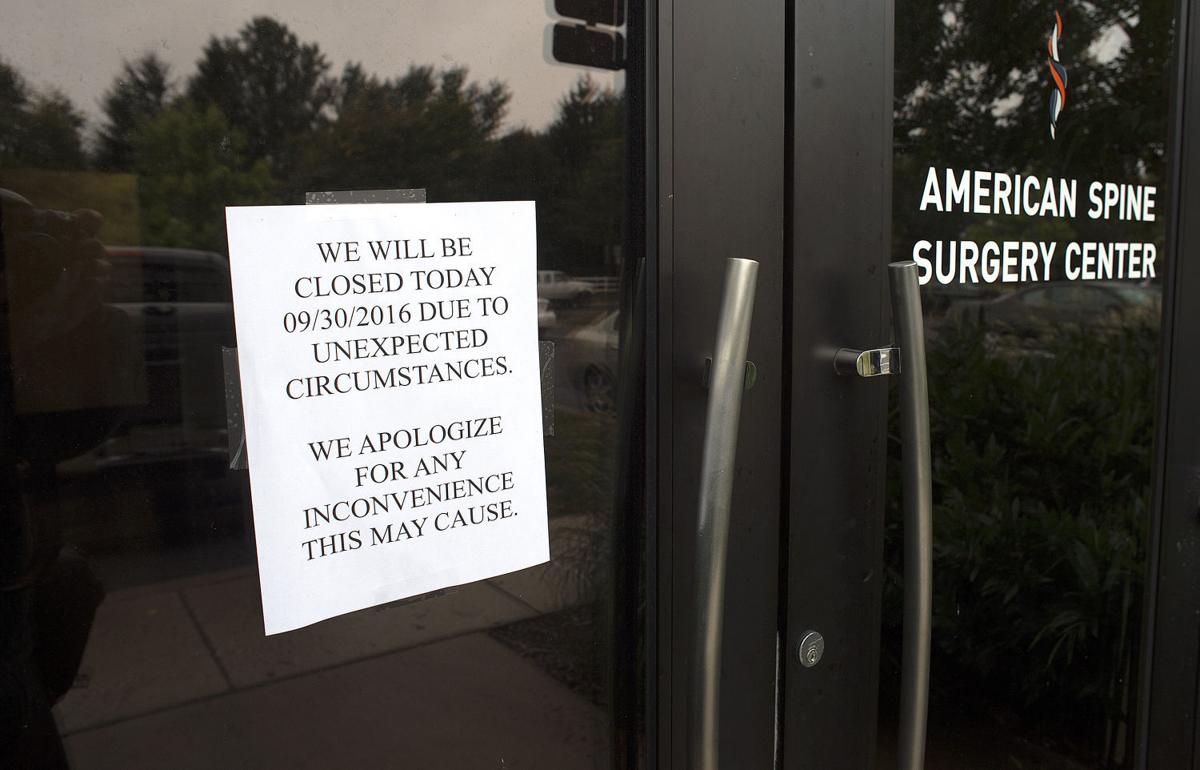 A sign on the door of The American Spine Surgery Center in Frederick to let patients that the office will be closed on Friday.

Police investigators walk out of the American Spine Center on Sept. 30 in Frederick.

A sign on the door of The American Spine Surgery Center in Frederick to let patients that the office will be closed on Friday.

Police are investigating the death of a doctor employed at a Frederick medical office who was the subject of a federal indictment announced last week.

Police were called at about 7:15 a.m. Friday to the American Spine Center at 1050 Key Parkway, where a man employed at the center was apparently unresponsive, said Michele Bowman, a public information coordinator for the Frederick Police Department. Police and emergency medical crews arrived a short time later, but the man was pronounced dead soon after, said Sgt. Andrew Alcorn, a Frederick police supervisor.

Police did not name the employee, but the American Spine Center identified him as 51-year-old Dr. Sandeep Sherlekar in a statement released Friday afternoon.

“The American spine family is deeply saddened to announce the sudden passing of our own Dr. Sandeep Sherlekar on Friday, September 30, 2016,” the statement reads in part. “As a family, we are in a state of shock and grief. We ask that everyone please respect our desire for privacy at this time.”

Sherlekar was a board-certified pain management specialist and anesthesiologist who received his medical degree from Delhi University, according to background information in a lawsuit.

He completed a residency in anesthesia at the All India Institute of Medical Sciences. He then served as the chief resident in anesthesiology at Hahnemann University Hospital in Philadelphia, where he was awarded the Robert Dunning Dripps Memorial Award for Excellence in Patient Care.

No obvious signs of trauma were evident when police arrived, and foul play was not suspected. An autopsy is scheduled for Saturday morning at the Office of the Chief Medical Examiner in Baltimore, Alcorn said.

A federal grand jury indicted Sherlekar and four other medical professionals on June 28 in a kickback scheme totaling around $1.37 million that was linked to the Frederick-based pain management practice. The indictment was unsealed last week.

Sherlekar’s arraignment was set for Oct. 7, according to online court records.

The other co-founder of the American Spine Center, Dr. Atif Malik, was one of the five indicted. His trial date has not been set.

Khan is now a co-defendant in the kickback case, and Wadhwa, a Frederick resident, has pleaded guilty to soliciting and receiving health care kickbacks. He is awaiting sentencing.

In the civil case, the doctors accused Khan and Wadhwa of conspiring to solicit bribes from vendors and taking money and property from the medical practice.

The newly unsealed criminal indictment, however, accuses the doctors of agreeing to collect kickbacks from vendors in exchange for referring patients to an unnamed laboratory in New Jersey.

The civil case was stayed on Jan. 16 pending legal proceedings.

Sherlekar’s death was reported before the center opened for the day. Police were still trying to determine what happened before his body was found.

“There is video surveillance on the property and we are reviewing that, as well as employee access card swipe records,” Alcorn said of the investigation. “We’re looking at every possible angle and avenue.”

Investigators were aware of the indictments, but Alcorn would not comment on whether the man found dead Friday morning was one of the people named in the indictment.

“He is involved in the federal investigation, I will say that, but I cannot say whether or not he was one of those five individuals named,” Alcorn said. “We’re reaching out with our partners with the FBI to discuss with them possible connections to the indictment.”

As part of Friday’s death investigation, Frederick police seized electronic devices and other evidence from the man’s office, Alcorn said.

Anyone with information about the case was asked to call Detective Gregory Loftis at 301-600-4109.

A sign taped to the front door of the American Spine Center announced that the center was closed Friday due to “unexpected circumstances.”

“We will be open on Monday, October 3, 2016 for normal business operations and will address any and all patient needs at this time,” the center’s statement reads in part.

In the meantime, patients in need of urgent medical attention from the American Spine Center were asked to call 240-629-3939, according to the statement.

A Frederick doctor charged in a medical kickback scheme can collect part of his business partner’s life insurance policy to pay for a lawyer, …

Prayers to all his family/friends. Did Killary put another notch in her belt? Another mysterious death associated with her. WOW.
Attending Doctor Anaizi in his operating on Hillary Clinton’s brain to remove the blood clot that had rendered her unconscious, this report says, was Doctor Sandeep Sherlekar who was the on call anesthesiologist at MedStar Montgomery Medical Center—but who, exactly 3 months later, on 30 September, was discovered dead.
http://www.everynewshere.com/doctor-treated-hillary-found-dead/?utm_source=dlvr.it&utm_medium=twitter

Heartfelt condolences to Dr. Sherleckar's children, friends, and the family at ASC. Dr. Sherleckar was an outstanding physician; incredibly smart, highly skilled, yet humble, sincere and caring (the most caring Dr. I've ever encountered). His energy, positive attitude and smile were infectious; often changing the dreariest of days. He was an expert at his craft; procedures that induced extreme pain by other doctors were nearly or completely painless with Dr. Sherleckar. I valued his opinions so highly that I consulted him with everything regarding my health, he routinely cross checked images, results or diagnoses of other providers and provided valuable insight. Having been a patient (turned friend) for over 10 years, I am completely devestated. Dr. Sherleckar was top notch, as good as they come. Regardless of any allegations, I'll always remember him as the compassionate, intelligent and kind Doctor that he was. I will be thinking of and praying for Dr. Sherleckar's family as well as his beloved family at ASC. Please remember that you're innocent until proven guilty (supposedly) and that everything is not black and white.

My heart is absolutely broken. I have been working with Dr. Sherlekar for approximately 9 years. He has helped me manage my serious health conditions that have plagued me lifelong. After seeing a doctor this long of course you'll get to know them. He was an amazing man that cared about his patients. I know that, I can say that, because I was one of those cared for, looked after patients. He has done amazing things for my care over the years that in no way I would have received elsewhere. His care was personal, thorough and patient. I am devastated. I'm not oblivious to the charges he was facing. I've know about them for sometime. Long before it was released to the public...because that's the type of relationship he and I had. Although NOTHING excuses or condones such behavior, I can tell you what this man did for his patients far superseded any wrong he ever did. Yes, what was done was illegal, but he NEVER jeopardized the health, wellbeing or care of his patients. NEVER! It pains me that Dr. Sherlekar felt he was left with no choice in how to deal with and face these charges. I can't imagine his desperation Friday morning when he went into the office and made the choices he made. My heart goes out to him, staff, friends and most importantly...his children. At the end of the day he was human...a father...a friend...a talented doctor and someone I am thankful to have had in my life. I only wish he was still here.

I work for this company and have worked with Dr sherlekar personally. He was a outstanding, smart, funny and talented doctor. His talent and skills are well known across the world. He thought so much of his patients of 20plus years and he would do anything for them. We are all devastated. Yes he was charged with some fraud allegations but the company or himself has NEVER been investigated or accused of given out to much pain medication or turning anyone into a drug addict. People turn them selves into drug addicte not the doctors. Especially NOT the ones at American Spine.

The business specialized in pain management. Those doctors there know exactly how to kill someone with medicine.

Someone wanted to silence him. He was poisoned.

He wasn't poisoned by anyone else but himself because that was his choice.

So u are confirming the cause of death?

Nope I just know what your saying is not correct

Despite everything, Dr. Sherlekar did a lot of good for a lot of people.

This is soo sad. I have been a patient of American Spine since 2011. And I have gotten to know all the staff there on a personal basis. I feel bad, especially, for the best people who are not involved. I was supposed to have a doctor's appointment today.

Thank you for your kind words. It's needed in this time of our sadness and grief.

I am saddened by this story. Thoughts and prayers for the staff, friends and families of this practice. There are many in this practice that don't deserve to be subjected to this. From a patient perspective, trying to find reputable and kind pain management practices is hard to do. It's just tragic and I feel so bad for the physicians, NP's and staff that were not involved but now are at this level.