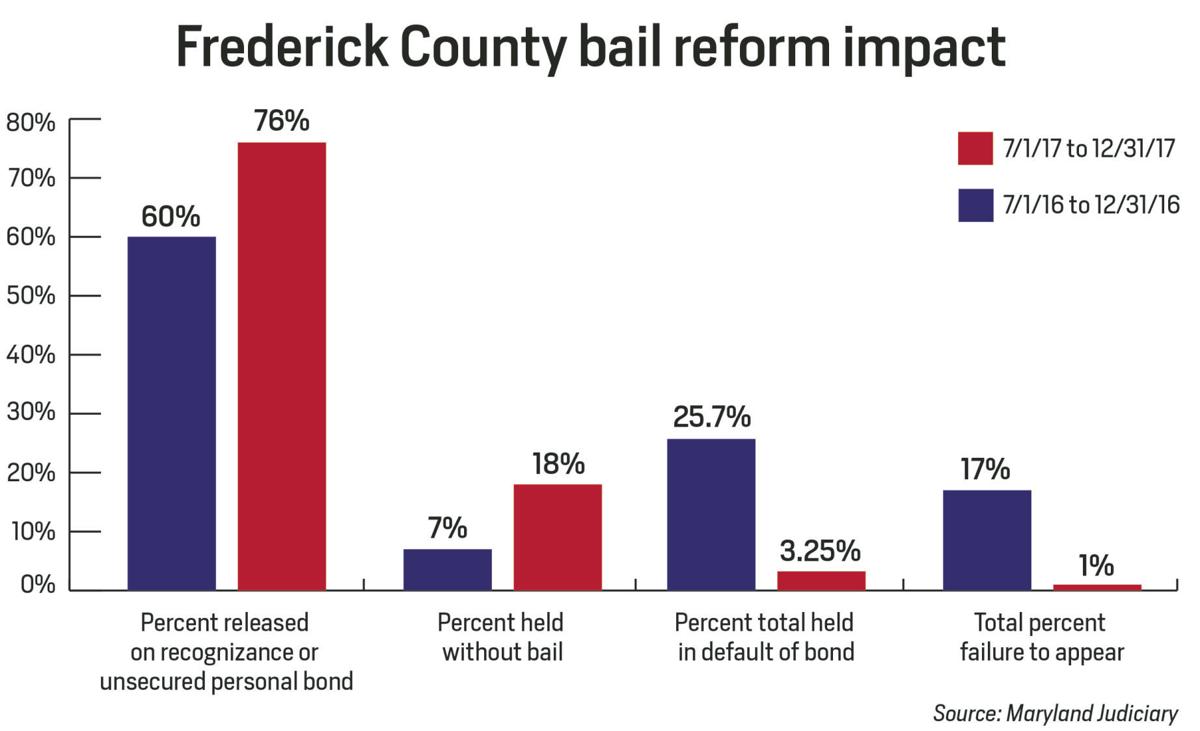 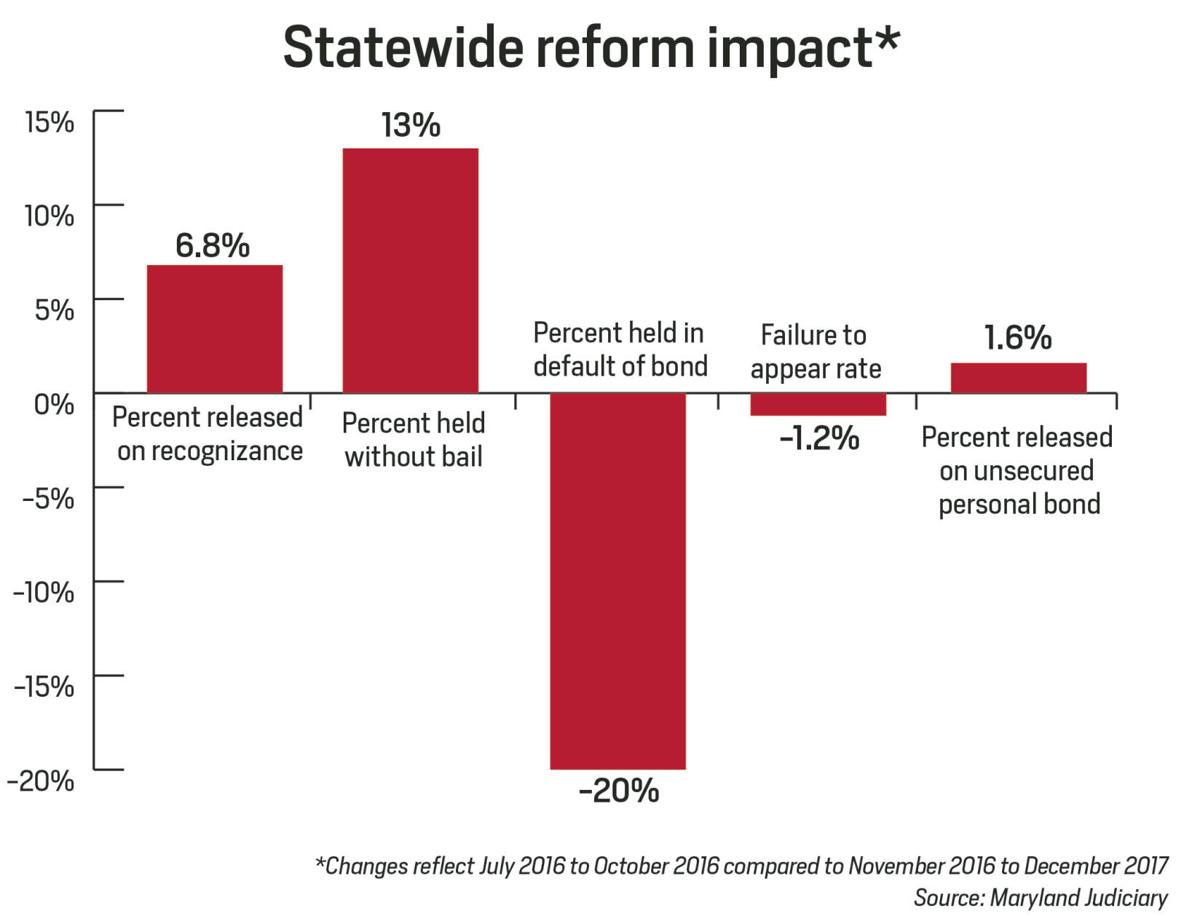 Gamal Amer Sheriff appears on a screen in the corner of a Frederick County district courtroom. The 33-year-old Frederick resident is dressed in orange and white as he joins a hearing in which Judge Frederick Bower reviews the denial of bail order Sheriff had received after his arrest Jan. 24.

Bower concludes the hearing by ordering Sheriff to continue to be held without bail.

In the six months after Maryland courts adopted new rules to help more defendants get out of jail while awaiting trial, more Frederick County defendants like Sheriff are being held without bail.

Data released by the Maryland Judiciary show the new rules did result in a 16 percentage point increase in Frederick County defendants being released on agreement to show up in court later. The number of defendants who judges ordered held without any assigned bail also increased, by 11 percentage points.

The Maryland Court of Appeals adopted new Rule 4-216.1 in February 2017 to provide guidance to judges regarding pre-trial release of arrested individuals. The rule was designed to encourage courts to release more defendants on personal recognizance and unsecured bonds, according to the rule’s text.

The rule also instructed judges and magistrates to individually assess each defendant’s ability to pay a bail and impose the least onerous conditions for release while still ensuring the defendant will appear in court and protecting the safety of alleged victims and the community. Courts are encouraged to use pre-trial services such as home detention, supervision and monitoring, as an alternative to incarceration.

Between the new rule taking effect July 1 and the end of 2017, Frederick County saw the number of defendants released on recognizance or unsecured personal bond increase to 76 percent. That is 16 percentage points higher than during the same time period in 2016.

At the same time, the number of defendants held without bail while awaiting trial rose to 18 percent, 11 percentage points higher than the same period in 2016.

The numbers mirror the effect bail reform has had on the whole state. Across Maryland, the number of defendants released on recognizance after their initial appearance in court is up 6.8 percentage points. The number of defendants held without bail statewide is 20 percent, up 13 percentage points from pre-bail reform levels, according to the Maryland Judiciary’s data.

Maryland started taking steps to reform its money bail system in October 2016 when Attorney General Brian Frosh (D) released an opinion that the state’s existing bail system was likely unconstitutional. An individual’s conditions of pre-trial release should only be as onerous as necessary to ensure the defendant appears at his or her court date and to protect the safety of victims and the community, Frosh’s opinion stated.

Bail reform advocates claim pre-trial detention, including for those unable to pay assigned bail, can induce defendants to plead guilty. In 2017, the Rockville-based Pretrial Justice Institute released a report stating pre-trial detention exacerbates mass incarceration by coercing “men and women to plead guilty so they can get out of jail faster, even when they may have a defensible case.”

A 2017 Stanford University study of courts in Harris County, Texas found that misdemeanor defendants detained before trial were 25 percent more likely to plead guilty and were more likely to commit future, and often more serious, crimes.

“The data indicates that the Rule is succeeding in ensuring that lower level offenders are not detained solely because they cannot afford bail,” their presentation states. “It also indicates that those that pose the most risk are being preventatively detained. The more challenging cases are found in the middle of the spectrum where an effective county based pretrial system would ensure public safety while ... reducing pretrial jail populations.”

“There are people who in the past might have had small monetary bond who are released with any bond, and some of the cases where there would have been a high bond who are held without bond,” Riley said. “I don’t know if those people would be able to post bond if they were assigned one.”

Frederick County State’s Attorney Charlie Smith said he was against the new rules from the beginning but has noticed marginal good changes. As the chief prosecutor in the county, Smith said he has not seen an increase in people failing to appear.

Smith said he would have preferred the state give judges more objective guidelines for assigning money bail.

“We felt some tweaking was needed, but we liked that judges had more options,” Smith said. “I don’t think this has affected people’s behavior. The people who are not going to show up for court don’t care about their bond or personal recognizance. People are people.”

Sheriff, facing multiple assault charges, is scheduled for a preliminary hearing Feb. 20, almost one month after his Jan. 24 arrest. He will likely remain in jail for longer before he has an opportunity to contest the charges against him in court.