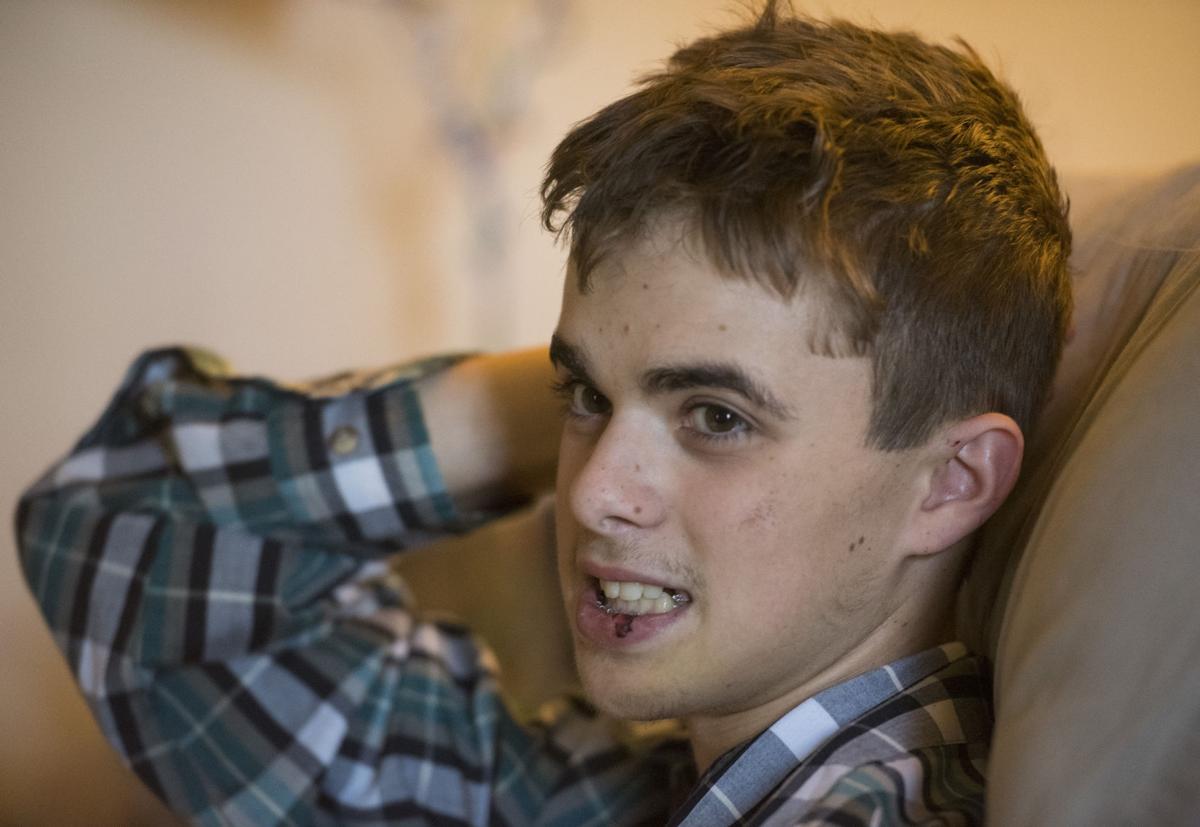 Middletown High School student Austin E. Atherton is back at home near Wolfsville after being in the hospital for nearly a week. He was in a single-vehicle crash that left him and two schoolmates injured. Atherton’s injuries were the worst of the three, requiring him to be flown to a Baltimore hospital for treatment. 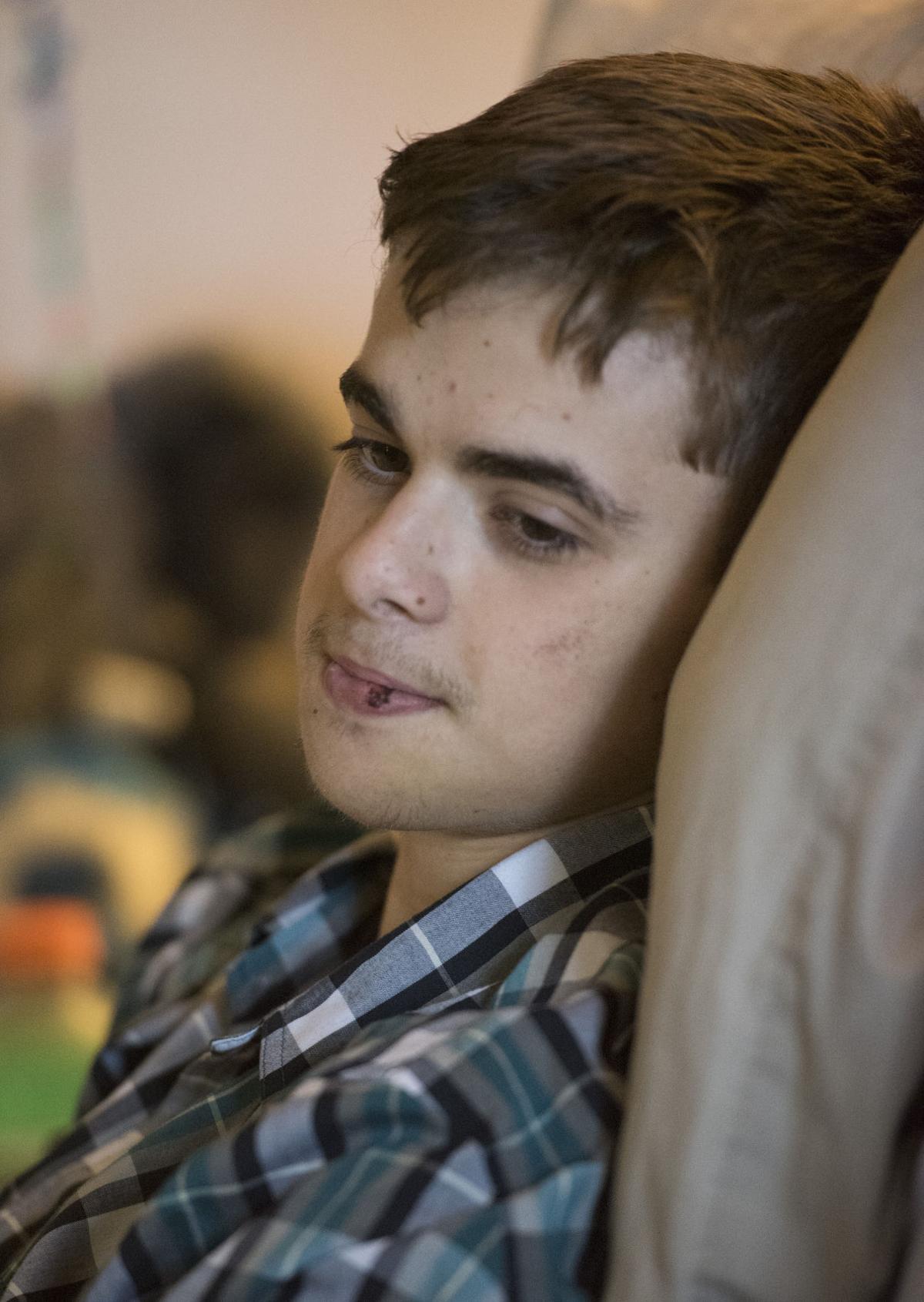 Middletown High School student Austin E. Atherton is back home at his family's house near Wolfsville after being in the hospital nearly a week. He was in a single-vehicle crash that left him and two schoolmates injured. Atherton's injuries were the the worst of the three, requiring him to be airlifted to a Baltimore hospital for treatment.

Middletown High School student Austin E. Atherton is back at home near Wolfsville after being in the hospital for nearly a week. He was in a single-vehicle crash that left him and two schoolmates injured. Atherton’s injuries were the worst of the three, requiring him to be flown to a Baltimore hospital for treatment.

Middletown High School student Austin E. Atherton is back home at his family's house near Wolfsville after being in the hospital nearly a week. He was in a single-vehicle crash that left him and two schoolmates injured. Atherton's injuries were the the worst of the three, requiring him to be airlifted to a Baltimore hospital for treatment.

Austin E. Atherton remembers little of the crash that sent him to a Baltimore hospital with serious injuries. He was driving his Jeep on Hollow Road in Middletown last week, with two schoolmates, when the vehicle rolled over.

“All I can say is what I was told,” the 17-year-old Middletown High School senior said as he sat in the living room of his home near Wolfsville on Tuesday afternoon, his voice muffled through a metal wire holding his broken jaw shut. “I was told speed was a factor and I know that the turn I went around was, it’s a more dangerous turn, and I was told I was ejected through the sunroof.”

Atherton was driving in the 7900 block of Hollow Road at about 7:30 a.m. Oct. 19. Atherton and his two passengers, 16-year-old Tyler M. Ferris and 15-year-old Nathan T. Fredericks, were on their way to class at Middletown High School.

Authorities believe Atherton was thrown through the sunroof as the 2001 Jeep Cherokee flipped four times after striking a berm, just off the road, on a sharp curve.

Austin said he does not remember whether he was wearing his seat belt, but collision reconstruction experts from the Frederick County Sheriff’s Office do not believe he was secured at the time of the rollover.

Ferris and Fredericks were released from Meritus Medical Center near Hagerstown shortly after the crash with relatively minor injuries.

Along with his jaw, Atherton had a broken collarbone, eight broken ribs, a ruptured spleen, a perforated lung and bruising to his pancreas, as well as fractures to both his right knee and wrist.

His spleen was removed to halt internal bleeding. At least three vertebrae were surgically repaired. Considering his injuries, Atherton’s recovery has been rapid, according to his father, Larry Atherton.

“He’s in surgical rehab right now, but he took his first steps on Friday with help,” Larry said. “By Saturday, he actually did steps on his own, walking out to the waiting room, so he’s making a hell of a recovery. He’s determined. It’s kind of a new lease on life for him.”

Austin was also dealing with another heavy burden, coming to terms with the fact that speed was “absolutely a factor” in the crash, according to Sgt. Paul Colantuno, a supervisor in the Frederick County Sheriff’s Office’s Traffic Unit.

Aside from brief snippets of consciousness — seeing his grandparents and other loved ones visiting his bedside — Austin’s earliest memories after the crash were asking about Ferris and Fredericks.

“It was like reliving a nightmare for him,” Larry Atherton said. “He thought he was at school, so I must have had to tell him probably 10 or 15 times, over and over again, the same thing, ‘You were in a car accident,’ and then he would realize, ‘Wait, where’s Tyler and Nathan? Are they all right? Where are they?’”

As the days passed and Austin’s memories solidified, he remained anxious, refusing to believe his friends were OK until the father of one of the boys visited him in Baltimore.

Even after both Ferris and Fredericks visited his bedside, offering support and kind words, Austin said he is haunted when he thinks about how much worse the crash could have been for his friends.

“I’m very grateful that they are still my friends to this day,” Austin said, his voice catching with emotion. “They’ve been with me through this whole thing. ... I would like to apologize to them again, because I’m so sorry that I put them through that.”

No charges had been filed as of Tuesday afternoon, Colantuno said.

The Atherton family also expressed deep gratitude to the community where they live, Austin’s friends and school officials at Middletown High School.

“The school has been incredible. His principal actually came down to see him on Wednesday, the day it happened, and has been in constant contact with us, so I’ve got nothing but gratitude for Frederick County Public Schools,” Larry said.

The question of how and where Austin will complete his senior year is the family’s next big hurdle. Administrators have suggested cyberschool as one possible solution to fit the teen’s recovery.

“All I can say is I’m very lucky to be alive and I would like to thank everyone for the support they’re giving me and my family,” Austin said.

Thank you for sharing this story, and to the young man who apologized. Big lessons, especially for teens. 1) Slow down 2) wear your seatbelts! He wasn't wearing it, and when he said he didn't remember, then he wasn't. I can tell you I was wearing mine last Wednesday, because I wear it EVERY time I drive. 3) Teens should NOT have passengers. They are EIGHT (8) times more likely to be in a fatal accident if they have passengers, and this could easily have been a fatal. Get well, young man.

Frayou.....just wondering what article you think should be front page today? I think as a parent this article is perfect. He is young, yes! - but he is speaking from his heart and telling his experience should be told. We have alot of young drivers on the road and parents/young drivers need to be aware of what can happen in the blink of any eye. I wish these boys a speedy recovery and hope this changes the way they think the next time they get behind the wheel!

Parenting 101 for young inexperienced drivers, as noted above,reference 8 lessons. Thank God they all survived the accident. I read other articles in today's paper I would consider important as well.

Question: Why is this article front page news? Glad these kids survived the crash as it appears they were lucky. Seventeen and barely has enough experience to drive himself to school safely. Somewhat surprised other families would risk their 15 & 16 year old kids driving with him as potential distraction. Very lucky.

I think it belongs on the front page so parents see it and can have discussions with their kids. Teens can relate more when they see this happen to "one of them".

I agree with b1

I think it's a great story. He could have died & he recognizes that, & also feels responsible for her passengers/friends. It's a reminder to everybody to slow down when going around curves & also to WEAR YOUR SEATBELT! The others were likely wearing their seat belts since they were barely injured. Usually people don't survive being ejected. - Also, I don't know one teenager who has never driven with passengers or who has been a passenger with another teen. I used to give classmates rides to school all the time.

Probably a slow news day, but there is a very important message here to other teens. No, you are not invincible, slow down, and buckle up! Statistically, if a teen has passengers, they are EIGHT (8) TIMES more likely to have a fatal crash. This could have EASILY been a fatal crash.

Glad to see everyone is recovering well :)

These kids are very lucky. I'm so glad to see they all survived and will be able to spread the word to other teenagers that driving is a huge gift but in the blink of an eye can change people's lives.

/\ /\ So true! Hopefully when he shares his story and tries to explain to others how quickly things can change he will be able to convince them.