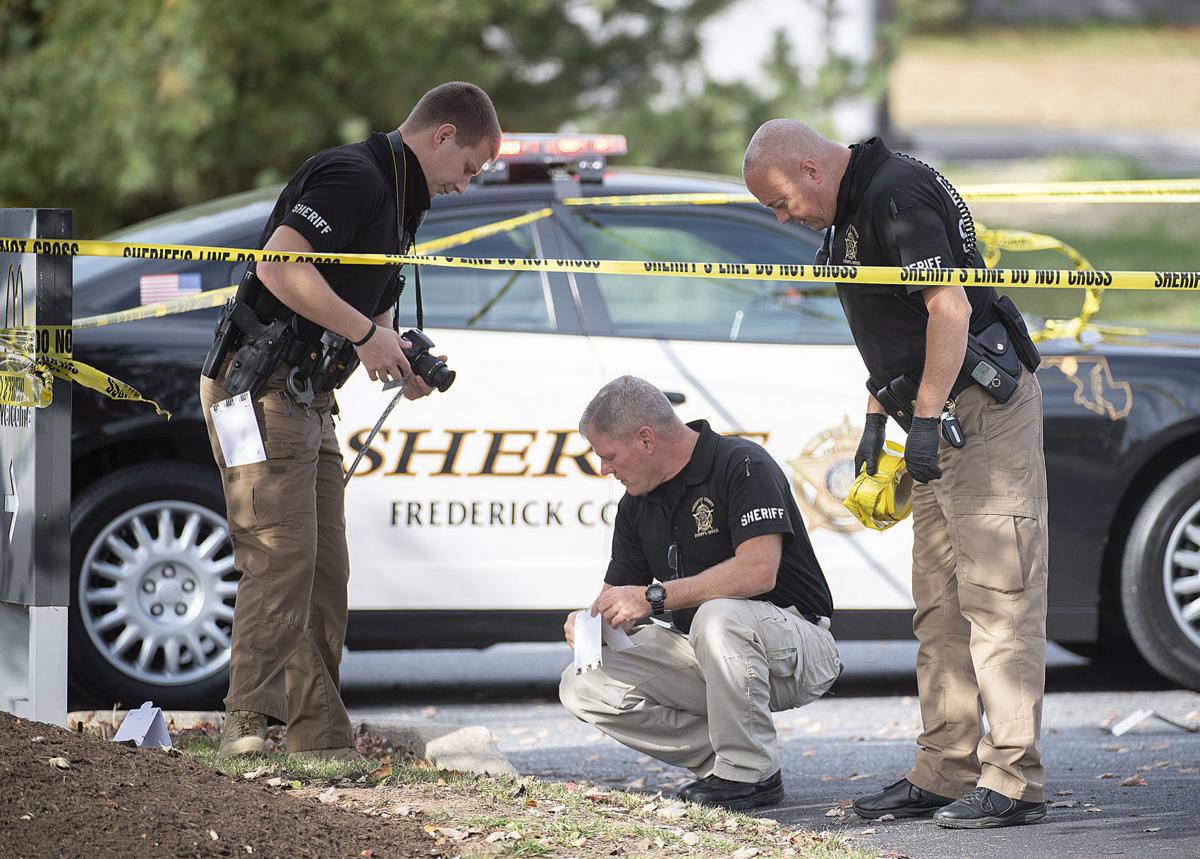 Police investigators search an area at the scene of Monday’s police-involved shooting on Silo Hill Road in Emmitsburg. 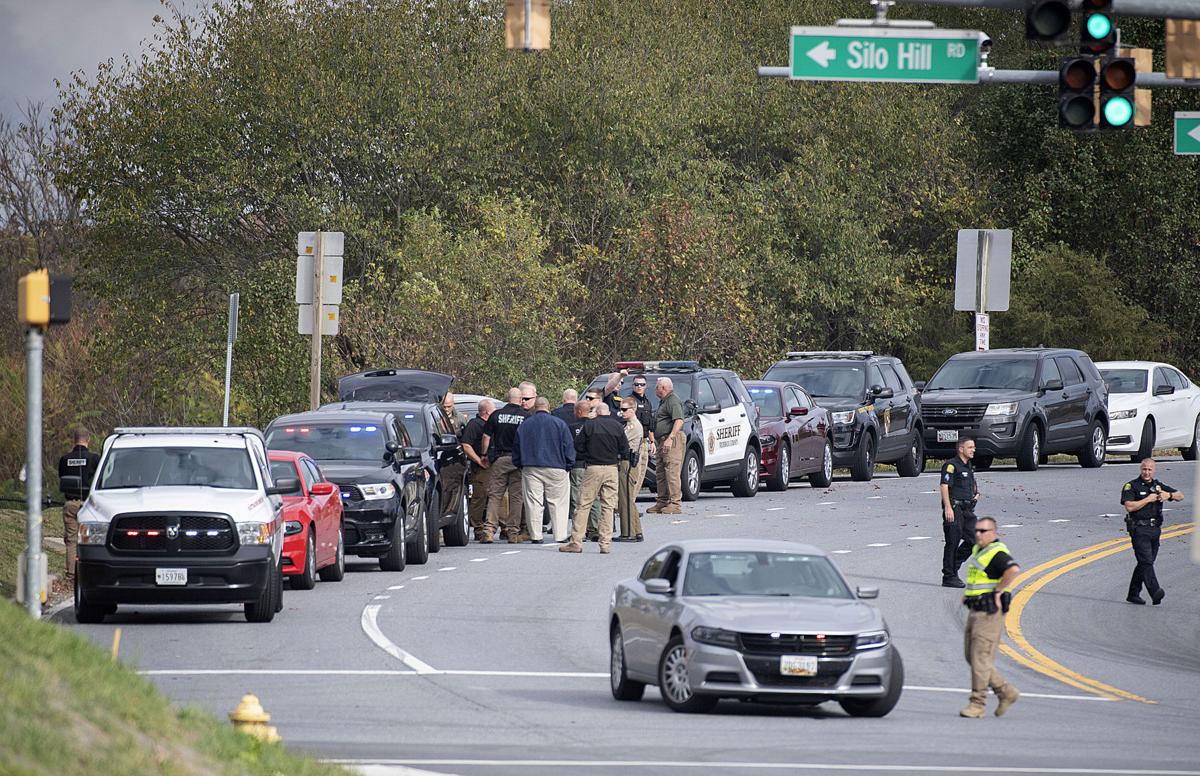 Law enforcement from Maryland and Pennsylvania gathered on Md. 140 at the scene of an officer-involved shooting Oct. 19 on Silo Hill Road in Emmitsburg.

Police investigators search an area at the scene of Monday’s police-involved shooting on Silo Hill Road in Emmitsburg.

Law enforcement from Maryland and Pennsylvania gathered on Md. 140 at the scene of an officer-involved shooting Oct. 19 on Silo Hill Road in Emmitsburg.

The Frederick County Sheriff’s Office has released the names of three deputies involved in Monday’s shooting in Emmitsburg that left one man dead and another in jail.

According to a news release issued Wednesday from Sheriff’s Office spokesman Todd Wivell, sheriff’s deputies Jason Ahalt, Jacob Jersild and Kevin Lynch were involved in the shootout, and they currently remain on routine administrative leave. Ahalt has been with the department more than three years, Jersild nearly three years, and Lynch more than 12 years, according to the release.

The shootout occurred around 2:30 p.m. Monday when Pennsylvania State Police officers contacted the Frederick County Sheriff’s Office asking for help in a pursuit of David Robert Leatherman, 42, of Hanover, Pa. and Bryan Paul Selmer, 38, who they said were driving a truck stolen in Pennsylvania and headed into Maryland. Police believed at least one of the occupants was wanted for an attempted murder in Pennsylvania.

Deputies joined a chase that went south on U.S. 15 into the Thurmont area, then back north on U.S. 15, during which at least one of the men fired shots at the police vehicles pursuing them and disabled a Cumberland Township, Pennsylvania, vehicle, according to a previous sheriff’s office release.

A Pennsylvania State Police trooper and a Frederick County sheriff’s deputy chased Leatherman into a nearby neighborhood, where he was arrested without incident.

Additional officers pursued Selmer and confronted him near a McDonald’s and an Exxon gas station on Silo Hill Parkway. While at the gas station, Selmer reportedly turned toward the deputies and took a “shooting stance with his arms extended in front of him, with his hands together, consistent with a person holding a firearm,” the release said.

Deputies in turn fired their weapons and struck Selmer. The release said eyewitness accounts deputies obtained support these accounts of what took place.

Selmer was flown to the R Adams Cowley Shock Trauma Center in Baltimore, where he was pronounced dead.

Wivell said Wednesday that deputies recovered a handgun at the crash scene in the median between U.S. 15 south and north by the exit for Md. 140. So far, deputies have not found any other weapons at the scenes of where they apprehended Leatherman, or where Selmer made contact with deputies during the pursuit, according to the release.

Leatherman was held without bail after a hearing Tuesday in Frederick County District Court, after declining to waive extradition to Pennsylvania on the attempted murder charge.

Police-involved shooting leaves one dead after chase ends in Emmitsburg

Seems pretty selfish and careless that the gentlemen in the FNP photographs are not wearing face coverings. They are at risk of contracting covid-19. Passing it to their families and store clerks, along with their kids passing it to others. I hope they're testing daily for covid-19.

Maybe you should discuss it with Chuck Jenkins, Plumbum. If anyone would be interested in what you have to say, I'm sure he'd be the one.

I hope the deputies get the appropriate psychiatric evaluation and counseling after this. Once a police officers makes his first kill, he tends to be more trigger happy moving forward.

While there is a wealth of information regarding the trauma to an officer after taking a life, I cannot find any published data after a PubMed search showing them to be more "trigger happy" after the event. Got a reference for that last statement?

not my style G.H. I comment with what I know and I move on. You can embrace what I write. Or you can discredit what I write. Your choice.

That seems to be the same approach that our current president takes on issues.

So, you basically make stuff up out of whole cloth and/or lie. Got it.

"Embrace what you write," Pb? Including all the lies and biased opinions you put forth here? No thanks, I believe I'll discredit what you write. That's a whole lot easier to do.

Take a ‘shooters stance’ expect to die of lead poisoning.

Maybe that was what he wanted, suicide by cop.