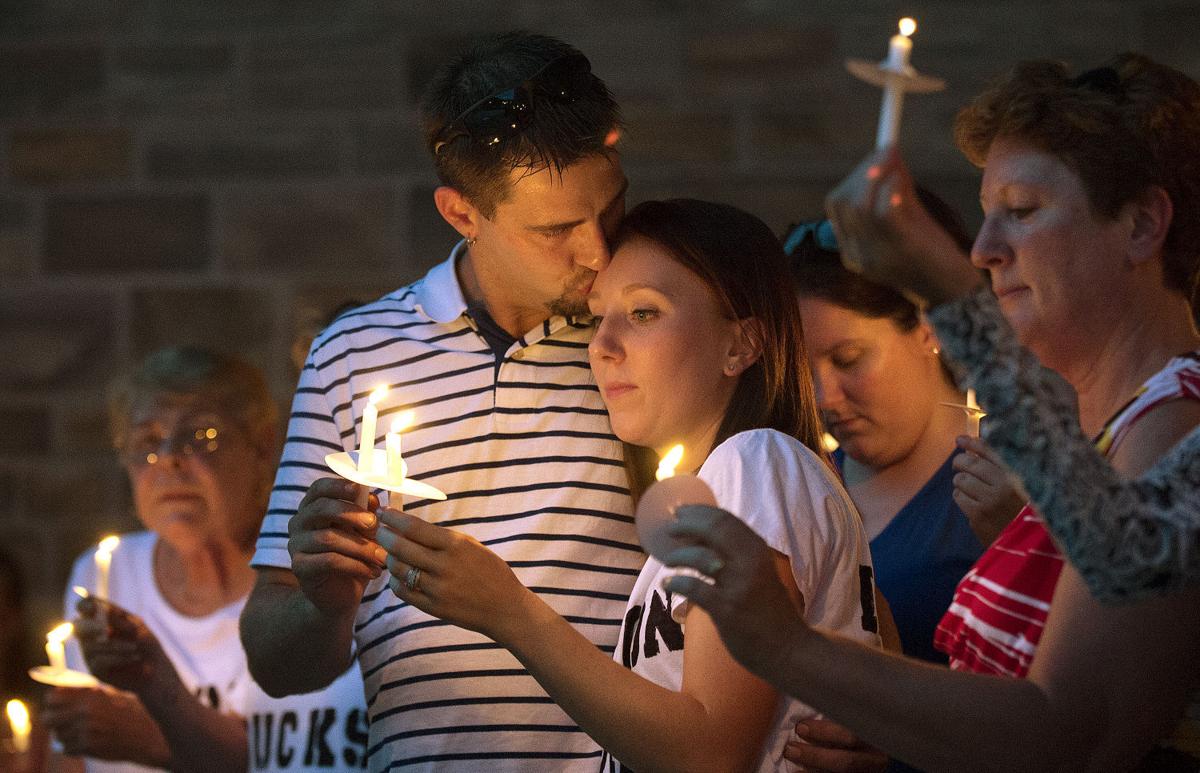 Jason Warfield kisses his wife, Kellie Warfield, as they stand in silence in August at the conclusion of a candlelight vigil for victims of drug overdose at the Baker Park bandshell. Kellie is a recovering addict and lost a close friend, Kevin Taulton, to a drug overdose. 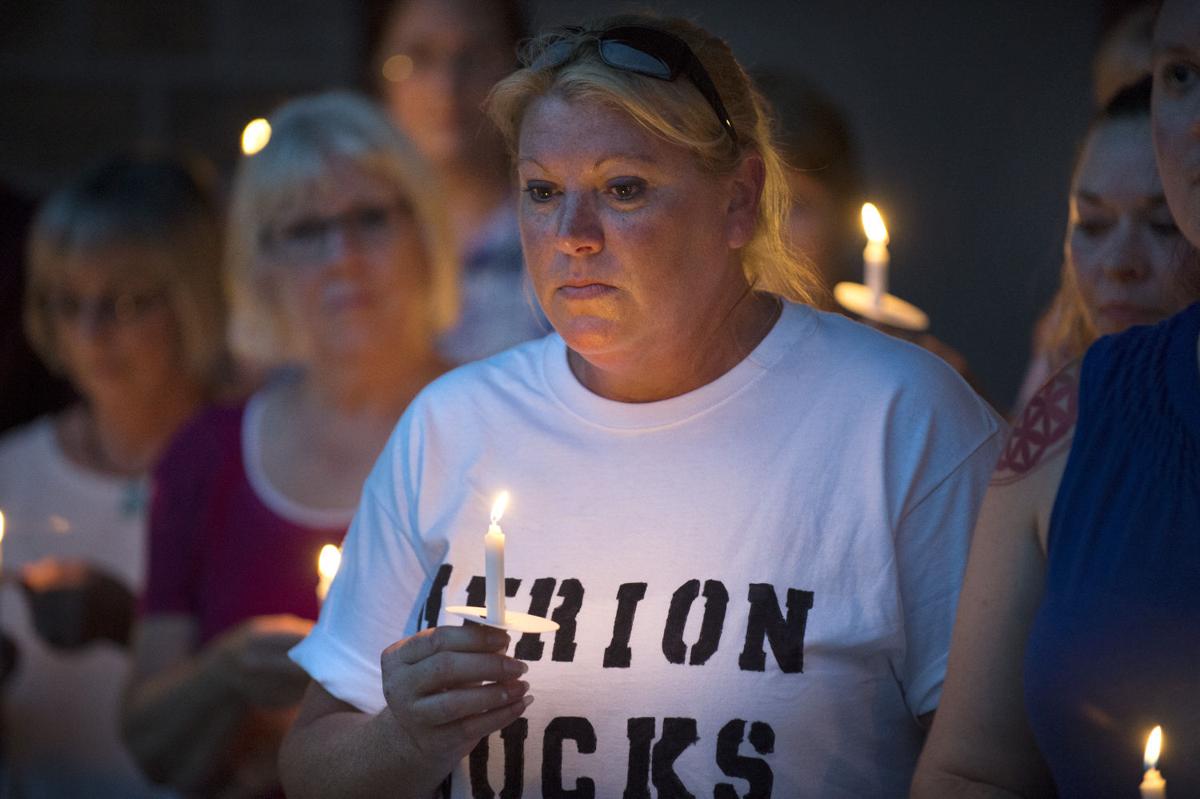 Leslie Scott, who lost her son, Kevin Taulton, to a drug overdose one year ago, stands in silence at a candlelight vigil Wednesday night for victims of drug overdose at the Baker Park Band Shell.

Jason Warfield kisses his wife, Kellie Warfield, as they stand in silence in August at the conclusion of a candlelight vigil for victims of drug overdose at the Baker Park bandshell. Kellie is a recovering addict and lost a close friend, Kevin Taulton, to a drug overdose.

Leslie Scott, who lost her son, Kevin Taulton, to a drug overdose one year ago, stands in silence at a candlelight vigil Wednesday night for victims of drug overdose at the Baker Park Band Shell.

Around 45 people gathered on Wednesday evening in the Baker Park Band Shell for a candlelight vigil to mark Overdose Awareness Day, an annual international event to raise awareness of overdoses and reduce the stigma of drug-related death.

It was one of the few awareness events in Frederick this year, despite what many attendees describe as an epidemic of opioid drug abuse in the area. According to the most recent data from the Frederick County Sheriff’s Office, there have been 206 heroin-related overdoses in the county since the start of 2016. Twenty-three of those overdoses have been fatal.

Kellie Warfield, a recovering oxycodone addict who organized the event, said the idea came to her a few weeks ago in a dream.

“I dreamed I was speaking at a candlelight vigil, and when I woke up, I thought, ‘I need to do this! Why haven’t I done this?’” Warfield said. She coordinated the vigil after 3½ weeks of planning. She hopes to make it a yearly event with a bigger turnout.

Though the event date was selected to coincide with Overdose Awareness Day, its overall mission was different. According to Warfield, the main purpose was not only to honor overdose victims and their families, but also to bring together a variety of perspectives on drug addiction.

After speaking about her own recovery experience, Warfield opened the floor to other attendees, many of whom have lost family members to overdoses or continue to support children who abuse drugs. Though anyone was welcome to attend the event, most stories involved addiction to heroin or opioid prescription drugs.

Deborah Harris, 51, took the stage to remember her son, Andrew, who died Dec. 23 from an overdose of heroin laced with fentanyl.

According to Capt. Tim Clarke, a special operations commander at the Frederick County Sheriff’s Office, there has been a marked uptick in cases involving fentanyl, an opioid with 80 times the potency of morphine. Dealers often sell heroin laced with or totally replaced by fentanyl, which makes it much more likely that users will overdose on the drug.

“When they go to buy the product, it looks exactly the same, so a lot of people don’t know,” Clarke said.

Harris said that in Andrew’s case, she wasn’t even aware he had started to use opioids again until he died of an overdose. Though he completed an intensive six-month rehabilitation program at Central Maryland Correctional Facility in Sykesville, Harris said that Andrew’s parole officer failed to report him after he failed mandatory drug tests. Andrew wasn’t issued a monitoring bracelet or given counseling for more than two months after he was released, Harris said.

“He completed the most difficult rehab program in the state, but I don’t think another jail term would have helped him survive,” she said. “There was no structure to help him after he got out.”

Harris’ experience isn’t unusual, according to other vigil attendees. Leslie Scott, whose son, Kevin, died of a heroin overdose last September, said she also wasn’t aware he was using again until she found him dead in his room at their home in the Mountaindale area of Frederick County. To help address the lack of knowledge about the signs of abuse and addiction, a new group called Unity and Action held its first meeting on Monday to help educate friends and family of heroin addicts.

“The issue is still so taboo,” said Ashley Whitby, who spoke at the meeting after losing her husband to a heroin overdose on March 28. “We want to help people who are afraid to reach out and find help.”

It is not up to the probation officers, or judge to make sure someone stays off drugs unless it's mandated by the courts....it's up to the addicted person to find their way to AA/NA meetings and find Their OWN support in this town and every other town across the nation. I am sorry for those parents/family and friends of the Addicts who lost their lives to overdoses, however you can not blame the "system" or anyone else except yourselves. Yes this may sound harsh though it is very true. After a 6 month stint in an intensive care rehab...it's up to the person themselves to find a meeting near them and inside that meeting to find their support group. I know this because I have been Sober and Clean for 23 years. Wake up folks and stop blaming the system for your lack of parenting skills.

ThevoiceofFrederick how many children are you raising or have raised ?

Sorry for your loss.

sad and unfortunate, but I have seen parents who preach, preach, preach and get involved after the fact, but the whole time their children are getting high, they are all over social media with posting party pics, going here, going there, looking like they are the "in-crowd" then they cant figure out why their kids got into drugs? Stay home, be a parent, not a friend. Parents never home, don't know who their kids are friends with, to busy about themselves, kids overdose, parents act the victim, someone set up a go fund me page, parents take a vacation or start a bogus non-profit. Not all- but to many, kids have to much freedom and this offends you, then you may be part of the problem.

What? Expect parents to actually parent? That's a radical concept. Isn't it easier to just leave the parenting to the TV, video games, snd eventually the public schools. Imagine that, parents being accountable for their failure to raise their kids to be productive citizens! [wink][wink][wink]

I've read and believe I understand what you mean. Something that I mentioned in the Unity and Action group in our kickoff meeting that we must become proactive in our reasoning and dedication, not reactive. Though many in Unity and Action have lost family members to the Heroin or Drug overdoses/Addiction, we are all trying to get proactive in creating a community where these drugs are not an option, or something to block our pain.

I'm a parent, and my son is 3 months old. I want him to grow up in a tight-knit community that is positive and uplifted. So, this is my first attempt at being a parent, and friend. I think that with your help and ideas, which I'm sure you have, we can help get to the roots of our problems. You can even help us set up that Gofundme campaign page and help make sure our organization is run correctly.

Let me know, I'm free to suggestions and help! UnityAction.org

thevoice, I truly believe you have no idea what you are talking about.

It looks like they should have used spell check when making the shirts.

"Honor" is not an appropriate word in this case, "remember" should have been used. Honor is for heroes, not drug addicts.

Honor your training wheels. Remember if you fall off, jump back on, don't give up.

The best way to avoid a "drug-related" death is to not start using drugs in the first place. Easier said than done, but it's the smarter path in life. Going down the path of crime and drug abuse is a choice. Choose wrongly and you end up on a slab.

Crime and drug abuse is a choice. Can't have one without the other right. You need to get out from under your slab more. You don't know any addicts who are law abiding (hick-up) citizens who blend right in with society. It must be boring at the top.

You are correct DueceCoupe32, crime and drug abuse are choices and have a symbiotic effect. Making excuses for addicts and criminals does no good. They won't stop until they want to or are dead.