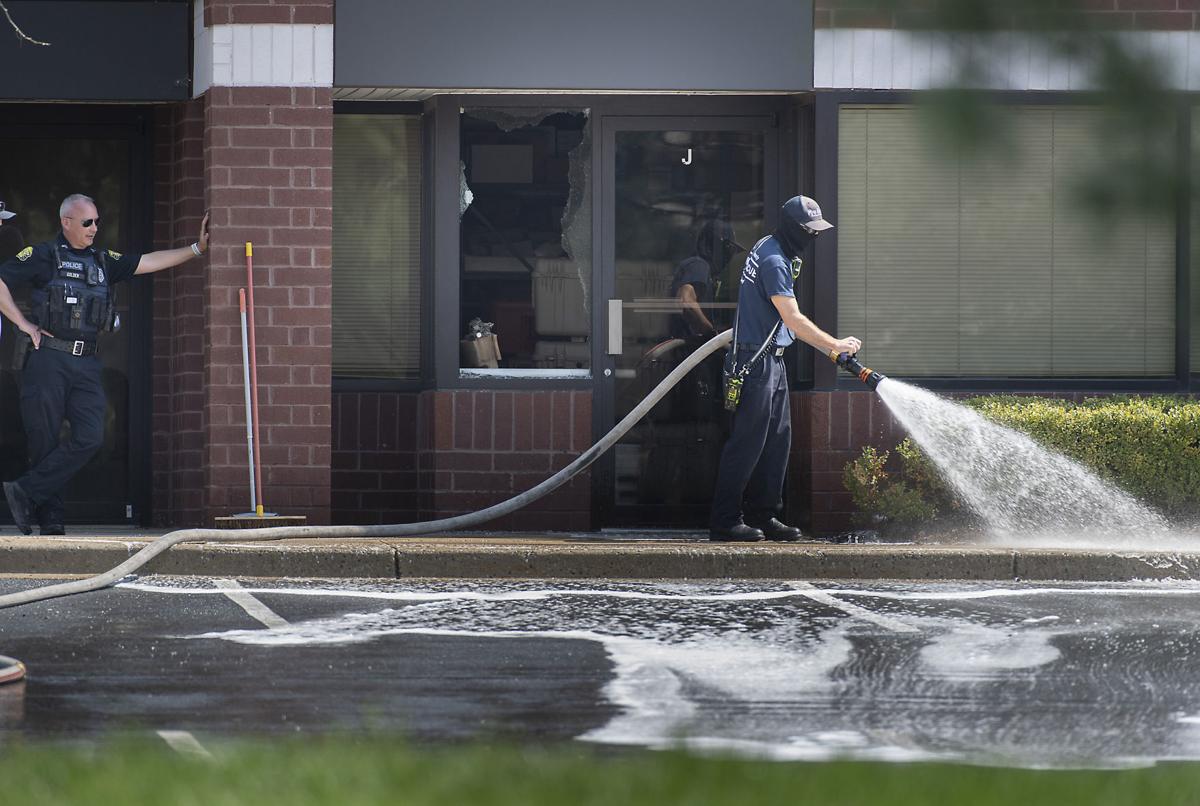 A fireman sprays debris from the sidewalk Wednesday afternoon at the entrance to a naval facility warehouse, where the shooting of two men took place Tuesday morning. At least one of the men is believed to have been shot near the entrance to the warehouse, leaving the window glass shattered and bullet holes remaining. At left is Frederick City Police Acting Cpl. David Golden. Multiple law enforcement agencies continued their investigation in the morning on Wednesday. 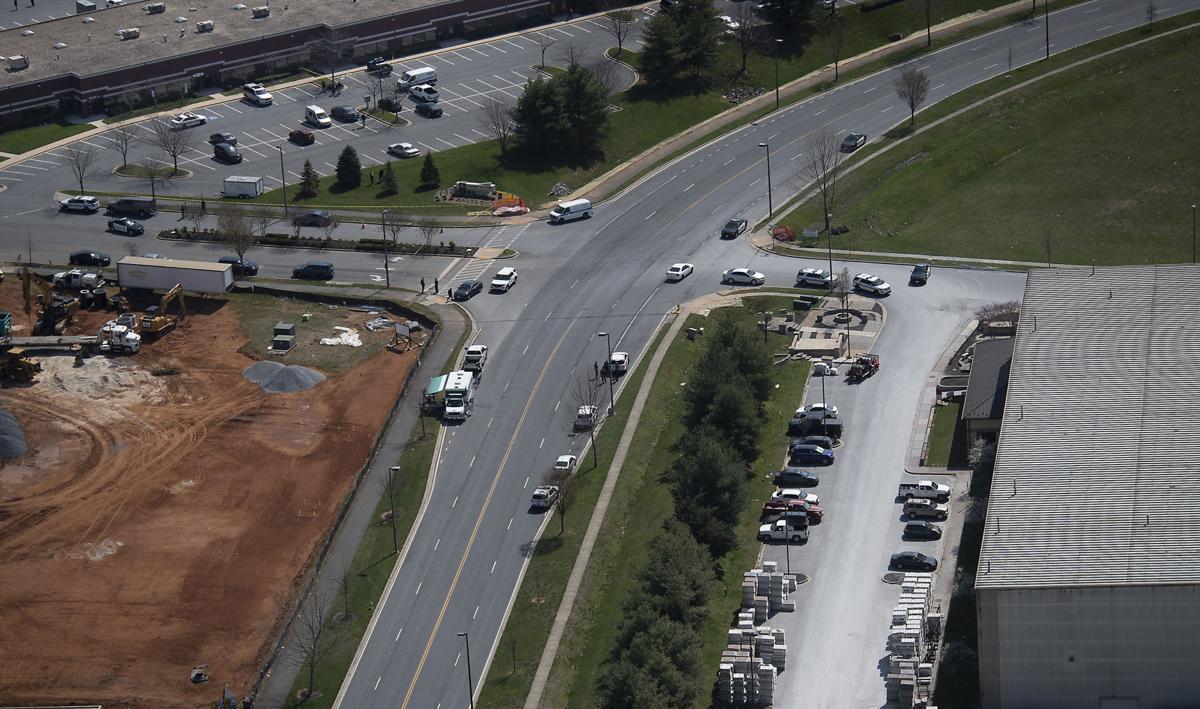 One of the two shooting victims was found by law enforcement at Nicolock Paving Stones, shown at right, after he fled the scene of the initial shooting, which was at a U.S. Navy facility within the Riverside Tech Park, shown in upper left. That victim was released from the trauma center in Baltimore Tuesday night. He fled the shooting scene, a warehouse across Monocacy Boulevard, shown in the center of the photograph. 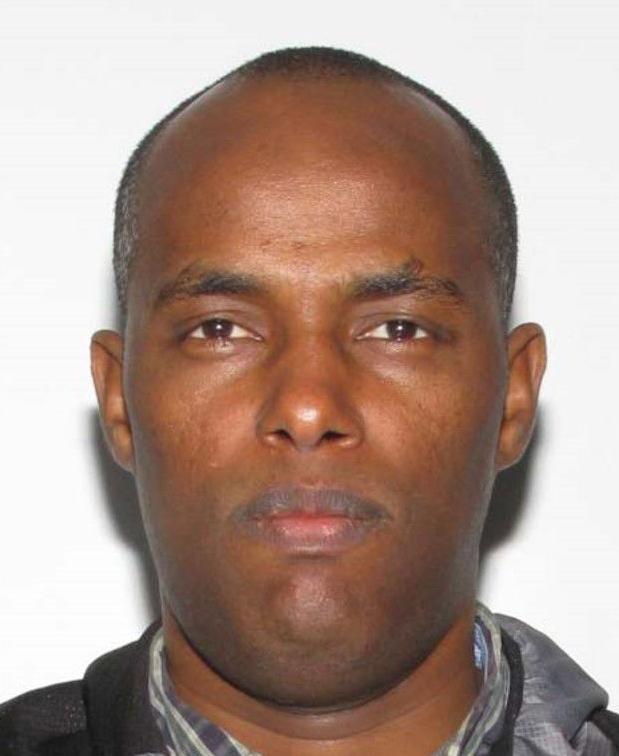 Garett Wagner was discussing packaging prices in a conference room Tuesday when he heard and saw Casey Nutt stumble into the reception area of the Nicolock Paving Stones warehouse near Monocacy Boulevard.

Nutt, a 26-year-old Navy lab tech from Germantown, was bloody and grabbing his chest, Wagner recalled outside the warehouse Wednesday.

"All I saw was this young man, and he reminded me of my little brother — that he was so scared and he was in fear," Wagner said. "I mean, his eyes were as wide as anything I’ve ever seen. And he just needed help."

Nutt needed help because he had just been shot by Fantahun Girma Woldesenbet, a 38-year-old Navy lab tech stationed at Fort Detrick and living in Frederick.

Local law enforcement officials said Woldesenbet used a rifle to shoot two people — Nutt and 36-year-old lab tech Carlos Portugal — at about 8:20 a.m. at a storage warehouse rented by the Naval Medical Research Center, Biological Defense Research Directorate. That warehouse is at Riverside Tech Park, across the street from Nicolock.

Woldesenbet then traveled to Fort Detrick, where he sped past security at the Nallin Farm Gate off Opossumtown Pike around 8:45 a.m. Less than four minutes later, authorities on the base fatally shot Woldesenbet, who Frederick Police had identified as a person of interest in the initial shootings, after the suspect brandished a gun.

Fort Detrick serves as a military biological defense lab and has several federal civilian biodefense labs. About 10,000 military personnel and civilians work on the base in the city of Frederick.

Nutt has been released from the shock trauma center, but Portugal, whom police and other law enforcement found at the naval warehouse, remained in critical condition as of Wednesday evening.

Outside of releasing the victim's identities and a photo of Woldesenbet, local law enforcement emphasized Wednesday the investigation will take time to complete — that includes pinpointing Woldesenbet's motive. Authorities had not speculated or disclosed any possible motive as of Wednesday night.

A window at the naval warehouse was shattered in the shooting, and a Frederick police officer eventually removed the last police tape — bordering the northern half of Riverside Tech Park — around 2 p.m. Wednesday.

Wagner provided more details of what occurred between the initial shooting and when Nutt entered the Nicolock warehouse. After Wagner reviewed surveillance footage, he said Nutt dashed across Monocacy Boulevard, appearing to ask for assistance from passing motorists.

Woldesenbet, in a black car, was about to speed off from the shooting scene. But he quickly turned around when he spotted Nutt, Wagner said, and pursued him toward Nicolock.

When Nutt ran into the warehouse reception area, Wagner said he took action, thanks to being from a military family. He said multiple relatives have served, including his father spending 30 years in the Navy.

Wagner told front-office staff to secure Nutt in a nearby bathroom. The staff also locked the front doors. Wagner then ran to the rear of the warehouse and secured the rest of the employees — about 15 total — in a maintenance shed.

Moments later, after running back to the front desk, Wagner saw the sales rep he had just been talking to about packaging material prices tending to Nutt — applying pressure to the wound with T-shirts, sweatshirts, paper towels, whatever would slow the bleeding.

"I’ve dealt with cuts and broken bones and stuff like that, but to see somebody panicking like that, in fear for their life, I’ve never been a part of something like that," Wagner said. "It’s something that will stick with me for a while."

Wagner said he's proud of the way his staff and he reacted, perhaps saving Nutt's life, but he believes others probably would have reacted the same way.

But then he did a U-turn after spotting Nutt, pursued him for a bit and then pulled onto Progress Court, directly across from the entrance, for about a minute. Wagner said Woldesenbet never got out of the car.

"That wasn’t random, that suspect wanted to kill that man," Wagner said. "[In] a random shooting, you just shoot and then you go ... For this guy to actually stop and pursue him? He wanted to finish him."

Wagner, who has worked at Nicolock for about seven years, said Tuesday morning's events were shocking. It could have been a lot worse if it weren't for local law enforcement doing "a damn good job," he said.

"You watch TV and you watch these mass shootings and these terrible things that are happening all across our country right now, and you kind of say, 'That’s never going to happen here in Frederick,' because things like that don’t happen in Frederick," Wagner said. "I’ve been here since 1989, I’ve grown up here, and for that to come to this area, especially in an industrial area like this, it hit home."

As a Navy hospital corpsman, Fantahun Girma Woldesenbet worked as a lab technician, according to a public affairs officer for the Naval Medical Research Center said.

Woldesenbet joined the Navy in 2012 and was an E4 at the time of his death, Lamkin said. He was not deployed overseas, according to his public military service record.

Woldesenbet’s first assignment outside training was as a student in the Navy Medicine Readiness & Training Command at Marine Corps Base Camp Lejeune in North Carolina, Lamkin said. From there, his military service took him to Corpus Christi, Texas, then Bremerton, Washington, followed by San Antonio, Texas; Portsmouth, Virginia and finally Frederick.

“Wagner said he's proud of the way his staff and he reacted, perhaps saving Nutt's life, but he believes others probably would have reacted the same way.” Earlier in the story it said Nutt appeared to be trying to get help from passing motorists - can we assume he did not get it? Your intervention was heroic, Mr. Wagner. God bless.