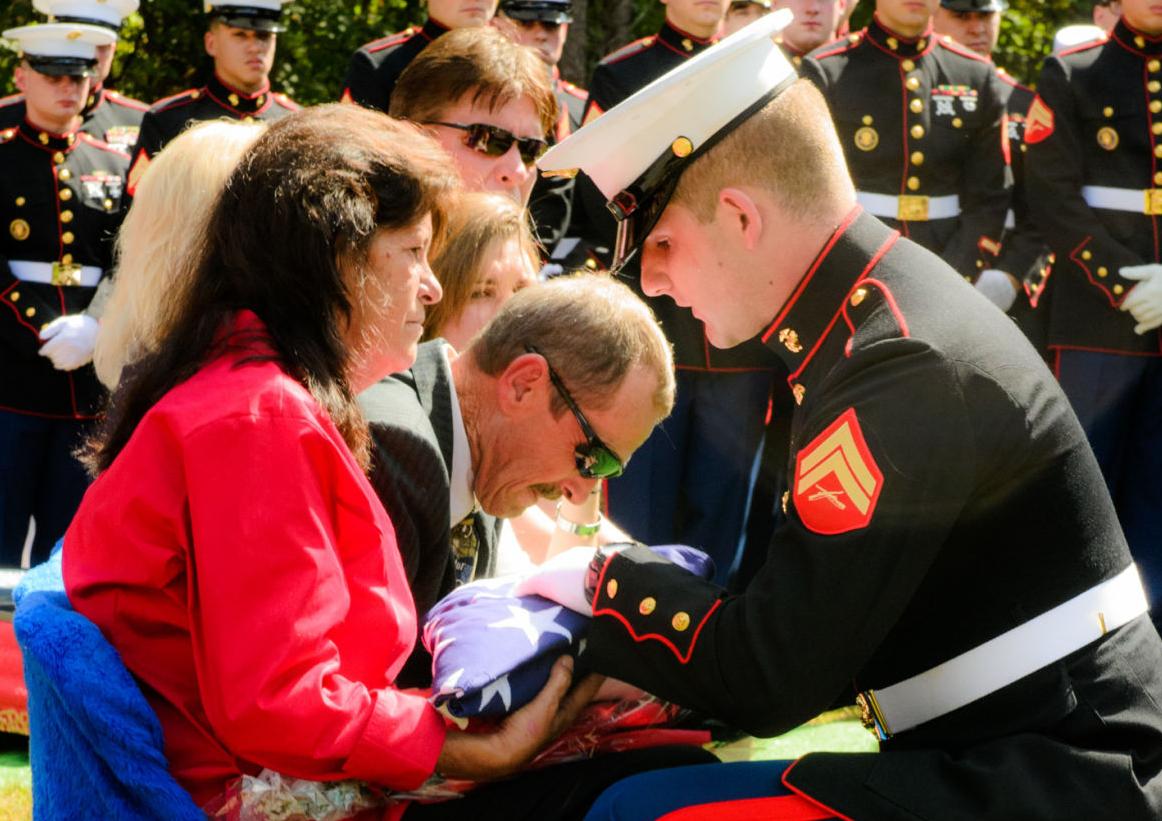 U.S. Marine Cpl. William Kyle Ferrell’s family accepts a U.S. flag during a service in Carthage, North Carolina, on Oct. 8. Ferrell was killed by a hit-and-run driver along U.S. 15 near Thurmont on Sept. 29. 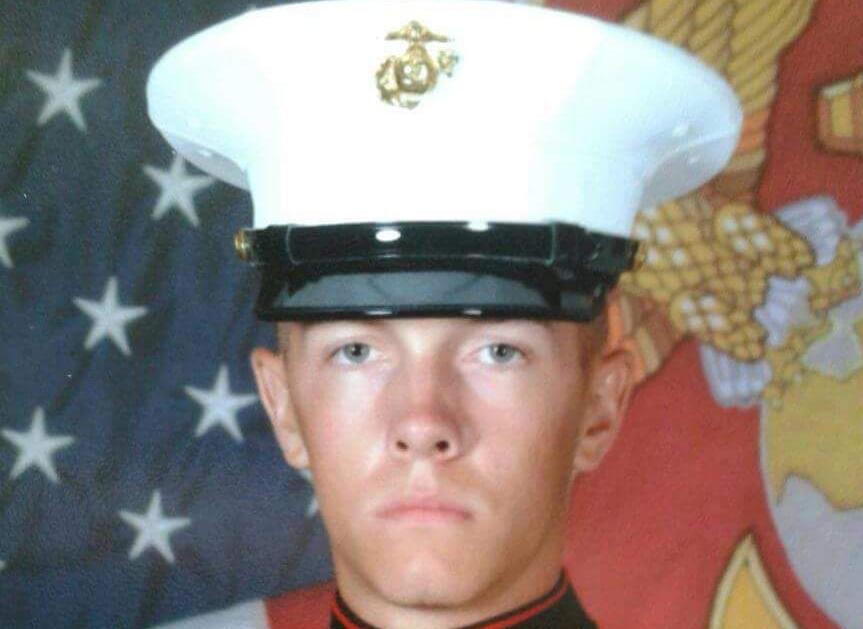 Even in his earliest days, William Kyle Ferrell seemed determined to make friends and lend a helping hand, said June Frye, his aunt.

That same instinct led Ferrell to pull his truck to the side of U.S. 15 late on Sept. 29 to assist a stranded motorist during a heavy downpour. After setting up road flares, grabbing a reflective vest and turning on his truck’s strobe lights, Ferrell, a 21-year-old U.S. Marine stationed at Camp David, was struck and killed by a hit-and-run driver.

Born in April 1994 to John Daniel and Donna Frye Ferrell, Kyle, as he was known, was introduced early to the culture of serving others.

His father was a police officer and his uncle, Freddy Frye, who was a Raleigh Police Department officer while Kyle was young, said Judith Nipper, Kyle’s grandmother.

Whenever Kyle visited as a child, he’d ask Nipper’s husband, Marty Nipper, whom Kyle called “Poppa Marty,” to take him to see firetrucks or stop at the local police station in the couple’s old Crown Victoria — because it looked like an undercover police cruiser.

“When they would come back, it might be two hours later and I would say, ‘Where in the world have you two been?’” Nipper said, laughing as she remembered her grandson’s visits. “And Poppa Marty would speak up and say, ‘Well, I think we’ve just been to every fire department in the area!’”

When Kyle turned 16, he began volunteering for Carthage Fire and Rescue in North Carolina, then joined the U.S. Marines after graduating high school in 2012, said his uncle, Freddy Frye.

After completing recruit training at Parris Island and infantry training at Camp Geiger, Kyle was sent to Washington, D.C., on the recommendation of his commanders to train to join the presidential guard, Freddy Frye said.

Even after being selected for the Camp David detail, Kyle kept his eye on the future, telling his uncle he planned to finish college and follow in his footsteps as a Raleigh police officer.

Committing to his dream, Kyle took time during infrequent trips home to go on ride-alongs with a friend who joined the Moore County Sheriff’s Office, Deputy Michael Crumpler.

“He would get home late Thursday and tell his parents on Friday, he would say, ‘Mom? I’m going to be here five days and then go home on Tuesday, so tonight? I want to go ride with Crump,’” Nipper said. “But then he’d say, ‘But Mom? I promise on Saturday, Sunday and Monday, I’m going to spend the whole time with you and Dad.’”

Crumpler remembers immediately being impressed by a 16-year-old Kyle Ferrell when they first met at the Carthage fire station as volunteers. Crumpler was 20 at the time and soon afterward joined the local police department. When Crumpler joined the sheriff’s office, Ferrell took every opportunity to join his friend on ride-alongs.

“I’ve heard it plenty of times, ‘If you want to see who your friends are, become a police officer,’ and I lost a whole lot of friends, but with Kyle and I, it brought us a whole lot closer together,” Crumpler said. “We literally spent every minute that he was home together. He always knew when he was coming home beforehand and I would pretty much schedule my entire week around that. ... I definitely won’t meet anybody like him again.”

After his death, Kyle Ferrell’s legacy for service to others lived on through his family. Relatives asked for donations to a GoFundMe.com account supporting the Carthage Fire and Rescue station in lieu of flowers. As of Saturday, the fund had raised $12,875 toward its $20,000 goal for a traffic light and new safety equipment at Kyle’s old station.

In dealing with the loss, June Frye admitted the family sometimes thinks of the driver who fled the scene after striking Kyle. They hope the rewards and other incentives to gather tips could lead to an arrest, but she said the family is resigned to the fact that Kyle’s killer may never be found.

“You should know that your punishment would be far less if you would just come forward,” June Frye said when asked if she had a message for the driver. “You will get the ultimate punishment when you meet your maker because we serve an awesome God. It’s not about revenge towards this person. It’s called doing the right thing.”

Metro Crime Stoppers of Maryland is offering up to $2,000 in reward money for tips leading to an arrest in the case. Additional private donors have stepped in to increase the reward amount, state police said. Anyone who witnessed the crash or who can help identify the driver was asked to call 301-600-4151.

When Emmitsburg resident Michael J. Crone had to pull over during a heavy downpour late Sept. 29 on his way home from work, he didn’t expect a…

One can only aspire to be as good as William Kyle Ferrell.

I just don't understand why you would not come forward if this were just an accident. Now this person is making it look as if they have something to hide. Someone has to know something, but who knows where this person was headed. Probably telling his friends he hit a deer due to the coward he or she is. I hope someone who may know something has the courage to speak up, this MARINE dedicated his life to serve his country and that also means even the coward that ran after the accident.

Why hasn't the governor intervened and increased the reward money for the conviction of the person who murdered this patriot?