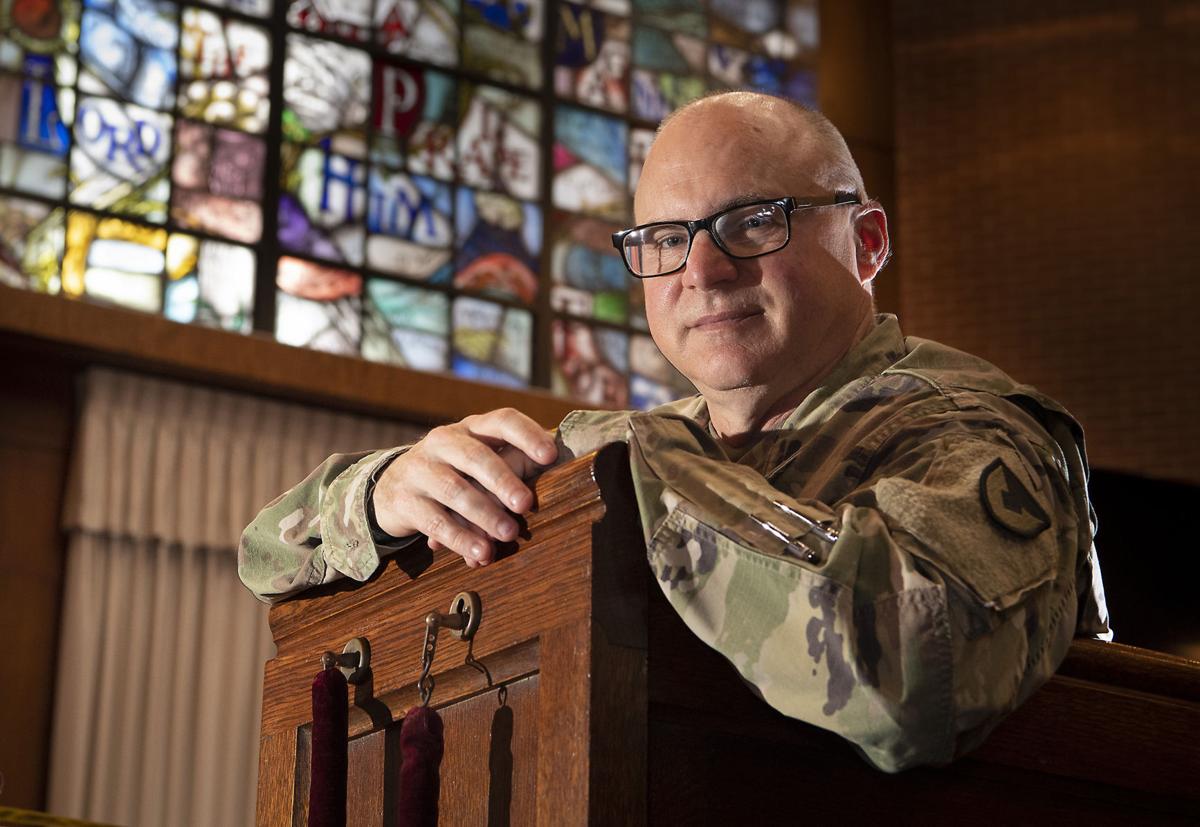 Chaplain Lt. Col. Gregory “Scott” Jackson in the Fort Detrick chapel. As garrison chaplain, Jackson’s role is to be part of the emergency response team during situations such as Tuesday’s events. 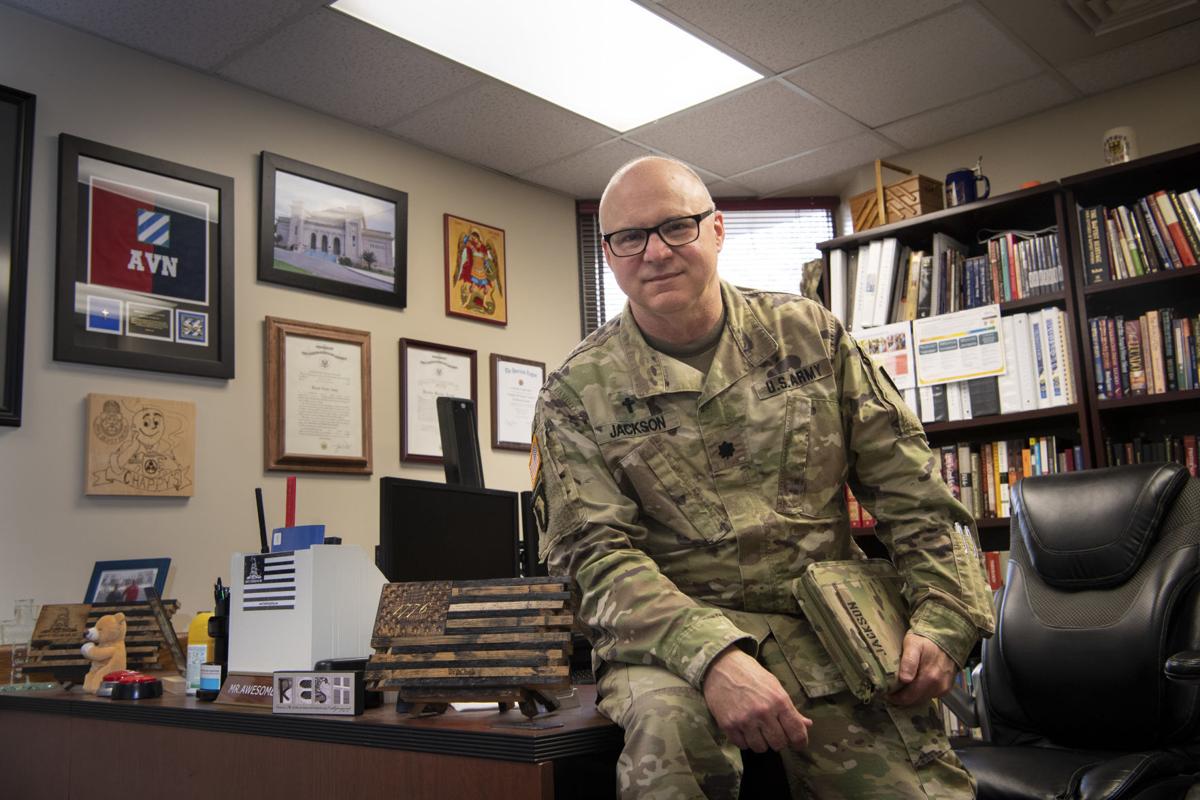 Chaplain Lt. Col. Gregory “Scott” Jackson in the Fort Detrick chapel. As garrison chaplain, Jackson’s role is to be part of the emergency family response team during situations such as Tuesday’s tragic events.

Chaplain Lt. Col. Gregory “Scott” Jackson in the Fort Detrick chapel. As garrison chaplain, Jackson’s role is to be part of the emergency response team during situations such as Tuesday’s events.

Chaplain Lt. Col. Gregory “Scott” Jackson in the Fort Detrick chapel. As garrison chaplain, Jackson’s role is to be part of the emergency family response team during situations such as Tuesday’s tragic events.

Chaplain Lt. Col. Gregory “Scott” Jackson was in his office at the Fort Detrick chapel, surrounded by his books, when he learned the post was on lockdown.

He locked the door. Sirens blared. His wife sent him messages.

Later, he responded to the emergency operations center, where he learned more about what occurred.

As garrison chaplain, Jackson’s role is to be an ear that listens, a moral compass, a spiritual adviser and — in a crisis like Tuesday’s — to be part of the emergency family response team.

In the 24 hours following the shootings that ended one sailor’s life and critically injured two others, Jackson handed out a lot of business cards. And he prayed. He wants civilian employees and military members to know he’s there if they need to talk. Based on those he’s spoken with, he senses a feeling of grief has washed over the post.

“I don’t think it’s anger at this point; I think they’re just kind of grieving for the [sailors] that got shot,” Jackson said. “I think it’s more grief than anything, and honestly probably a little anxiety going on.”

Jackson has been a chaplain for more than 20 years, of which two-plus years have been at Fort Detrick. There are four chaplain positions at the post. He said an event like this is not normal for the military installation, though they do train for emergencies.

The day of the shootings, Jackson felt compelled to write a message to the Fort Detrick community, which was shared on Facebook early Wednesday. He said he got the urge to put his thoughts to paper after a religious affairs noncommissioned officer sent a message of support in a group text. Jackson liked what the NCO said, and he thought about what the community at large needed to hear.

In Jackson’s letter, he acknowledged many questions will likely go unanswered, like why the shooter did what he did.

“The question that faces us is, how will we move forward, how long will it take to get back to normal?” Jackson wrote. “The answer is found in how well we support each other during this time. Regardless of who we work for, what color our uniform is, if we still wear one, or what ... rank we wear.”

Jackson emphasized the importance of reaching out to others.

“A cord of many strands is stronger than a cord of one,” he wrote. “This small community is made up of many strands, and it takes all of us watching out for each other to remain strong, especially during times like these. This is why it is so important to check on each other, so we do not get to a place where actions like this are repeated.”

Jackson sat down for about an hour Wednesday morning with a civilian employee to talk about what they’re experiencing in light of the shooting.

“When you take command or when you get in a position, you just don’t think this is something you’re going to be facing,” Jackson said. “But it seems like every other week that seems to be happening in our culture today — there’s a shooting somewhere. And unfortunately, it happened at Detrick, but our folks rose to the occasion and did what they had to do.”

One of the people on the receiving end of questions from the public and media has been Brig. Gen. Michael Talley. He is commanding general of the U.S. Army Medical Research and Development Command and Fort Detrick. Jackson made sure to touch base with him after the shootings. Conversations with the chaplain are held in confidence.

At a news conference Tuesday, Talley said the Navy, in combination with Army resources, sent a behavioral health team to support Fort Detrick. They also set up a hotline to help connect the post’s community to resources.

“I can assure you we are applying full resources to ensure we have the right behavioral health support, the right chaplain support set up for all of those who have been touched by this,” Talley said at the news conference.

Despite the circumstances, Jackson is hopeful the community can move forward.

“People have the ability to overcome this,” he said.

The Army has a religious affairs division/command/brigade? That’s intriguing.