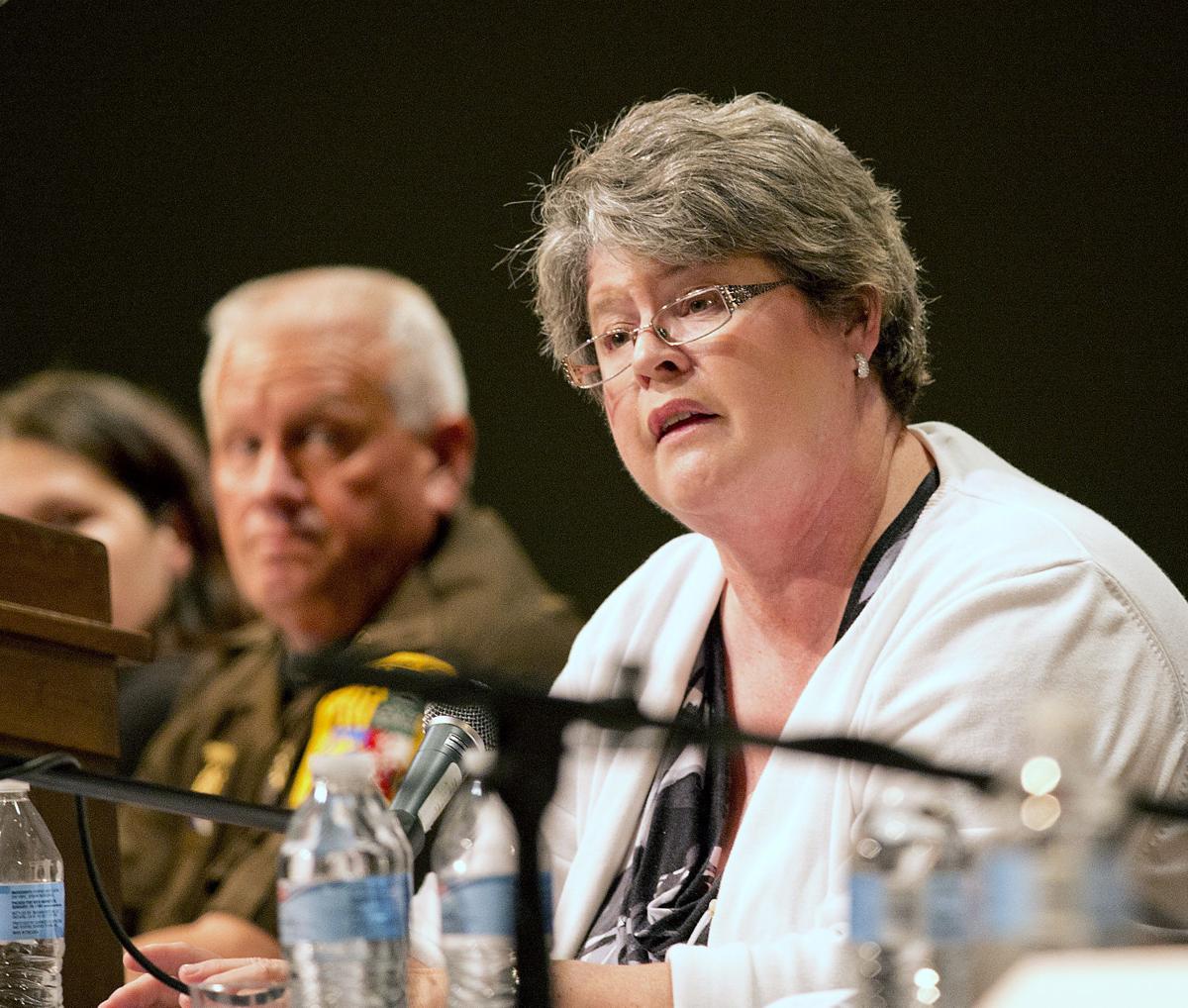 Before his addiction to heroin, Karl Otto says he had a picture-perfect life.

Although he battled alcohol and drug issues in his teens, Otto began to flourish by age 20. Over the next several years he secured a steady job, got engaged and bought a house.

However, a prescription for Percocet after a wisdom tooth extraction in his late 20s led to an addiction to the painkiller itself and later heroin for the Frederick resident.

“My life went from picture-perfect to absolutely ... I can’t even describe how bad it got,” Otto told the half-full auditorium at Frederick Community College on Thursday evening.

As his life spiraled out of control, Otto found himself arrested on drug charges and soon after, attempting to overdose on heroin.

“I should be added to that list,” Otto said of state-released data on fatal heroin-related overdoses. “Heroin almost killed me.”

In Frederick County, 26 people died from heroin-related overdoses in 2014, according to data recently released by the Maryland Department of Health and Mental Hygiene.

Ken Dickinson, a registered pharmacist who represented Gaudenzia, one of the region’s largest drug and alcohol addiction treatment programs, advocated for stricter policies for prescribers to prevent residents from being overprescribed or unnecessarily prescribed drugs such as Vicodin and Percocet.

“The pharmaceutical industry very insidiously and very measured went about educating, training and convincing primary care, family doctors in the community that they could now write for these very powerful, long-acting [medications],” Dickinson said, explaining the widespread abuse of prescription drugs.

As a preventive measure, Gaudenzia President and CEO Michael Harle argued for a structured curriculum that begins in kindergarten and continues until 12th grade to educate children about the dangers of drugs.

“There is no too early,” he said, noting that many of the company’s clients say they began using drugs as early as 11 years old.

The panelists agreed that distributing information about the heroin and opioid epidemic and providing the public with knowledge to seek treatment and help is essential.

“Public awareness presentations like this one tonight, that each person in this room, go home and talk to your family, talk to your kids, your grandkids, siblings, and make them aware of how bad the problem really is,” Jenkins said. “I think that’s where the real solution lies.”

Noelle Workman, who attended Thursday’s town hall, said she had hoped there would be more discussion about innovative ways to address the heroin epidemic.

“I heard a lot of talking and a call for action, but not a call to action,” Workman said, explaining the panelists provided possible solutions but offered no ways to implement these changes.

Cynthia Terl, who helped spearhead the event as a representative of Gale Recovery, a local nonprofit addiction treatment program, said she thought the town hall went well but lamented the low attendance.

“We had hoped there would be more parents interested in finding out” about the problem, Terl said after the event.

There are no set plans to hold a similar event in the future, but Terl said Gale Recovery will support any efforts by other agencies or companies in the community.

Karl Otto's story is true FOR HIM and is also the situation for others who got into illegal drugs (be it cocaine, PCP, heroin) due to genes that enable a craving and continued drive for such substances. Many, many lives went very seriously downhill since people started something out of boredom and/or just wanting to relieve some stress. From there, people lost jobs, their homes and their families.

However, the laws have already changed where narcotics prescriptions have to be filled in their entirety. So if the pharmacy does not have all of it in stock, one cannot just be given a partial quantity. The pharmaceutical industry also changed prescriptions to having coatings that could not easily be crushed. The first situation has already presented a huge problem nationwide for those who are paralyzed (or nearly) and have a major problem getting out of the house. Those people have to have assistance by a strong companion to get out and get into a vehicle - and so forth. I am speaking about how things were for my late brother-in-law who had a major spinal cord injury. For veterans, these issues are on the forefront in the news.

Another thing is that paranoia has already taken over emergency rooms where narcotics that are truly needed (and I'm not talking about people who are going there specifically for the drugs) are now not getting the relief that they need.

I'm just tired of the widespread assumption that narcotics taken for a real need initially then lead to addiction. It simply is not true. The vast majority of people take narcotics for the relatively short time to recover from surgery, deal with horrendous migraines, "whatever" and stop as soon as they recover. It does not produce any sort of "high" whatsoever. In fact, it can just produce nausea/vomiting at worst.

All this hoopla in this county/state is also making good doctors paranoid about refills on needed non-narcotic pain relievers. All of this is going too far.

Another thing that irritates me is that teens who experiment a little (be it cigarettes, alcohol (and no, please no driving) are destined to become addicts. How many of us tried something as teens just out of curiosity and don't have any craving or possible desire whatsoever (for whatever it was) as responsible members of society as adults?

I have commented on this before, but how many responsible people "out there" are trying to track down somebody who is a dealer? I mean --- really? I don't understand how somebody goes about it! Do people drive around a specific section of town --- put "the word" out among friends? I just don't believe that a huge minority of so-called narcotic addicts who are living a responsible life (at least, in this area) are risking criminal charges, jail, identification in the news, etc. to move on to illegal drugs stemming from some narcotics that they were prescribed for a legitimate medical condition.

Heroin addiction has created far more jobs in MD than O'Malley ever did.

Heroin is not just a medical problem. It is a psychological and societal problem. It should remain illegal. I've seen too many people ruined by it. However, users need treatment not jail time. Manufacturers and sellers of the drug should be prosecuted.

fnfn,love your commentary! American Capitalism is Heartless! Democracy is Not Capitalism. Capitalism is Immoral, as in,Organized Crime! The War on Drugs was a war for the benefit of the wealthy to eradicate poor people and give jobs to the power hungry representatives of White Supremacy! Drugs Addiction is a Medical Problem Not a Moral Problem!

Our legal, and Illegal, cruel Capitalism, work like that. It will be like that; until we have heart felt capitalism. Capitalism needs to be broken into small enough parts, to have a heart. Capitalism needs a heart transplant, to change its mechanical heart to a human heart. The same can be said about our justice system, so far.

Legal and Illegal cruel Capitalism work like that. It will be like that, until we have heart felt capitalism, that is broken into small enough parts to have a heart. Capitalism needs a heart transplant, to change its mechanical heart to a human heart.

“The pharmaceutical industry very insidiously and very measured went about educating, training and convincing primary care, family doctors in the community that they could now write for these very powerful, long-acting [medications],” Dickinson said, explaining the widespread abuse of prescription drugs.”

That is right. Legal and Illegal cruel Capitalism works like that. It will be like that until we have heart felt capitalism that is broken into small enough to have a heart.

We are in a world without enough love, and yet some suggest more fear. Perfect fear casts out ALL love. Enough fear and pain casts out love.
Science has run the experiment with rats. Cage rats and make it hell for them and it is easy to addict them to heroin. Give them a Paradise with other rats to relate to and a good place to live and play and they are almost impossible to addict to heroin. Our kids are looking for Paradise here, and the adults that do not know better make it more like Hell. Why not free quality education through college for those that will work for it, like other advanced nations That could level the playing field for the next generations.