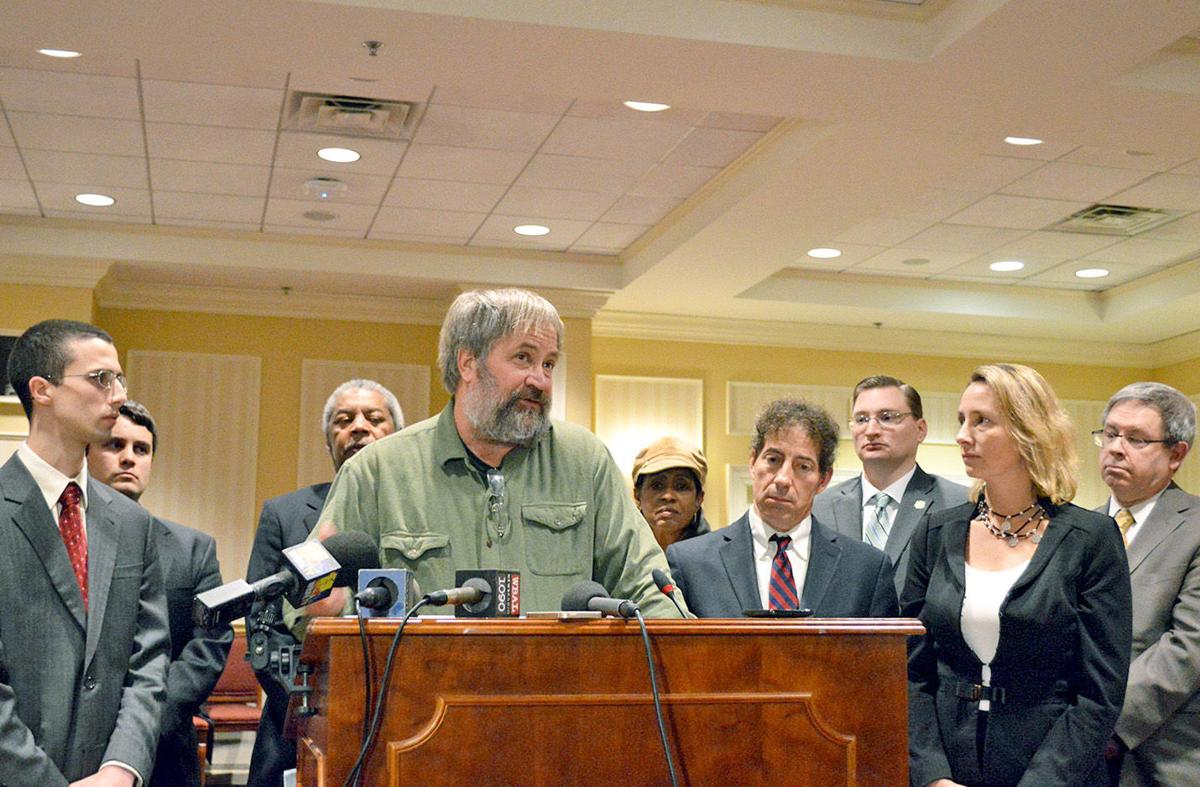 Randy Sowers, who owns South Mountain Creamery with his wife, Karen, speaks on Tuesday in Annapolis about the practice of civil asset forfeiture. Sowers was surrounded by a group of lawmakers, activists and others who had their assets seized. The broad coalition is calling for the end of civil forfeiture programs in Maryland. 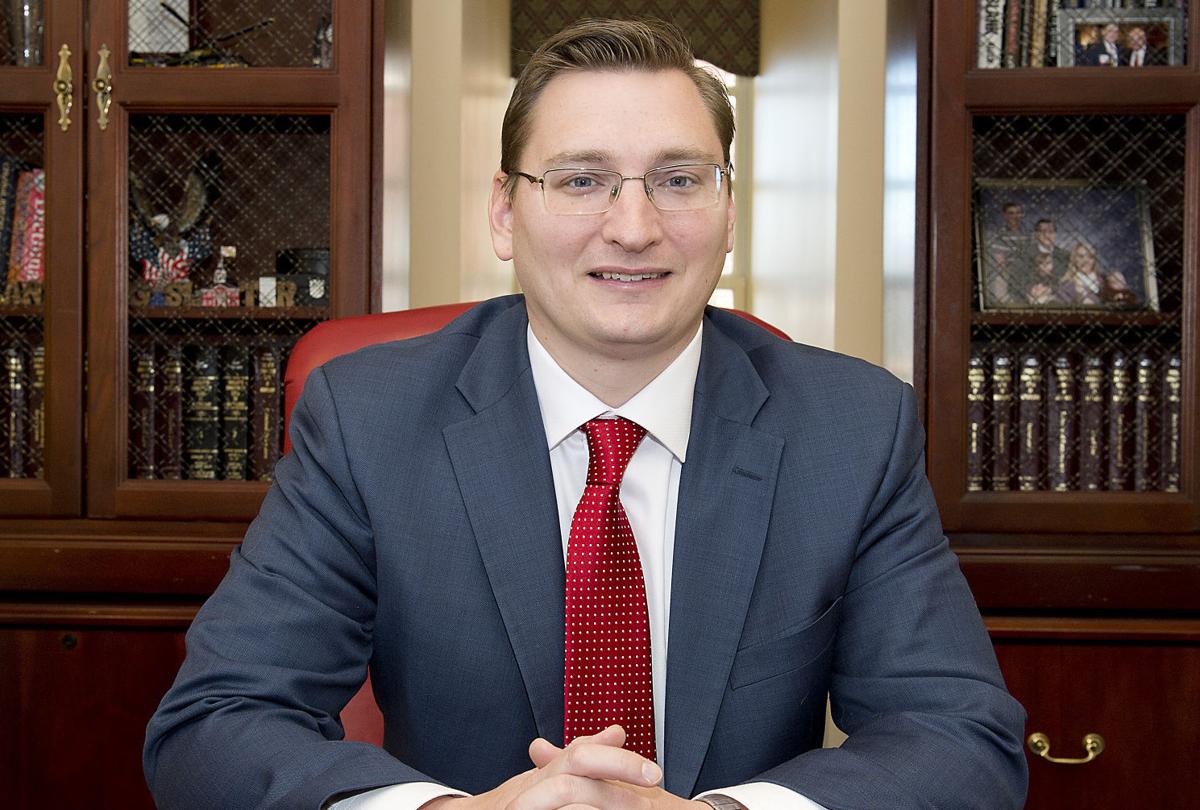 ANNAPOLIS — The owner of a Frederick County farm joined activists and lawmakers from both sides of the aisle on Tuesday to call for the end of civil asset forfeiture in Maryland.

Under civil forfeiture, police can seize and then keep or sell property, including cash and real estate, that may be associated with a crime, even though the owner may not ever be arrested, convicted or directly involved.

Randy Sowers, owner of South Mountain Creamery, said he supported the end of the practice after his farm was unwittingly caught up in a federal civil forfeiture case in 2012.

“It takes a lot to scare me, but I was scared,” Sowers said. “They want you to think the worst, so you’ll just give them the money and move on.”

Since the forfeiture complaint was filed against his business in 2012, Sowers said he has felt a calling to stand up for others who were put in a similar position.

He agreed to forfeit $29,500 to the federal government through a settlement, which he accepted to avoid losing even more in a protracted legal fight, Sowers said.

A bill introduced last week by three state senators — Michael Hough, a Republican lawmaker from District 4 in Frederick; Jamie Raskin, D-Montgomery; and Robert Zirkin, D-Baltimore County — would end the practice of civil asset forfeiture in Maryland by requiring police to pursue criminal charges against a person before seizing their property.

“So many of us, myself included, didn’t really understand how this process worked, but the more I looked into it, the more I was deeply troubled,” Hough said at a news briefing Tuesday that was attended by more than a dozen advocates for reform.

Under current state law, police can seize property and initiate civil forfeiture proceedings in court, by alleging that property is associated with criminal activity. The cases, which are brought against property rather than a person, require the owner to come to court and prove the innocence of their belongings. In civil forfeiture, unlike in criminal asset forfeiture, people don’t have to be charged with or convicted of a crime before the government can take permanent ownership of their property.

“I believe that the state of the law today is blatantly unconstitutional,” said Raskin, a constitutional law professor at American University. “It says that the government — without arresting you, charging you or convicting you — can seize your private property and then require you to go out and hire a lawyer to go to court to sue and prove that your property is innocent.”

Others who advocated for the end of civil asset forfeiture on Tuesday included representatives from the American Civil Liberties Union, the NAACP, ALEC — a conservative group of lawmakers, a retired Maryland State Police major, and a Baltimore man who said his life is still in disarray after his income tax return and car were seized in a 2012 traffic stop.

A bill passed last year — which was vetoed by Gov. Larry Hogan and scheduled for an override vote on Thursday — would scale back the civil asset forfeiture program, and place the burden of proof back on the government.

The new bill could also have an indirect effect on federal forfeiture cases in the state, by prohibiting local police and prosecutors from transferring forfeiture cases to the federal government unless a criminal case related to the seizure is prosecuted in the federal court system, or the person consents to the seizure. The same provision was included in the 2015 bill, which will be the subject of a veto override vote on Thursday.

State law enforcement agencies have received more than $85 million since 2007 through a now-suspended federal program to process civil forfeitures.

Walter Olson, a senior fellow at the Cato Institute’s Center for Constitutional Studies who lives in Frederick County, applauded provisions that would increase transparency and oversight of asset forfeiture cases.

The bill would require law enforcement agencies that seize property to submit annual reports to the Maryland Statistical Analysis Center.

During last year’s deliberations over the bill, the Department of Legislative Services could not estimate the fiscal impact of the bill. There were no reliable data on how often the types of property affected by the bill are seized by local law enforcement agencies.

Funds from forfeiture cases in state courts are generally transferred to the general funds of a police agency’s municipality.

The Frederick Police Department received $78,643 in revenue from forfeiture cases in the 2015 fiscal year and spent $68,186 from asset forfeiture funds, according to city budget documents.

A Frederick County farmer who became central in the fight to reform federal seizure laws will get a check from the IRS.

Should something be called an imitation if it’s the natural version of a product?

This occurs so frequently around military installions that most posts and bases have a person that acts as an liaison between for profit police departments and our war fighters they can usually negotiate with the for profit law enforcement agencies in getting the military members property back or bogus charges dismissed so that the war fighter can get back to defending the country.

This was a surprise to me that the police could take private property without due process, the law does need to be changed.

The Sowers were making bank deposits just under $10,000 in order to avoid having deposits over $10,000 reported to the Feds. That just so happens to be against the law, a law that was put into place to prevent criminals from regularly making deposits below the $10,000 limit and thus go unnoticed by law enforcement. That was Sowers first mistake. His second mistake was in not seeking legal representation and advice when dealing with the Feds. As such, he agreed to give up some of the money in return for not having charges filed, charges that he would probably have been able to beat.

What is Ted "Too Liberal For Sarah Palin" Cruz* doing in that photo?

*Hough claimed recently that people keep mistaking him for Cruz.

If I were Hough, I would grow a beard and mustache, maybe a wig. No one wants to be compared to a nut.

A bit of caution here. One should review the proposed legislation (2016 Senate bill 161) and not rely solely on the public statements of the bill's sponsors. Notwithstanding the claims of the full-moon, pitchfork & torch, camouflage-in-the- woods, black helicopter crowd, the "Gubmint" does not go around willy-nilly seizing the cars & houses of honest citizens for no reason. Law enforcement and prosecutorial officials can seize a car used to transport illegal drugs and a house containing a meth lab. The primary beneficiaries of the proposed legislation would appear to be drug dealers.

If the authorities want to seize the property of drug dealers, why not get a court judgement? These laws are widely abused, with innocent citizens caught in a bureaucratic morass. In addition, these laws provide a financial
incentive for the authorities to abuse the law. Bob Lewis

well, you're wrong. The government's thirst for power on this is completely out of control. Some light reading for you-

If and when someone is found guilty, then I have no problem with criminal asset forfeiture. However, I am profoundly opposed to concept of asset forfeiture without a guilty finding

Drug dealers might be the beneficiaries but so would innocent people.

Blackstone's ratio: "It is better that ten guilty persons escape than that one innocent suffer."

You say the police do not just willy nilly seize property. I say they do and have. Why else do they not need to charge a person with a crime. They charge a thing with a crime and then require the owner to post a bond and hire a lawyer to attempt to get back their property. What, a thing gets "arrested"? How can that be, a thing not a person. Sure it makes perfect in through the looking glass.

I support this effort to modify civil forfeiture laws in Maryland, but I would eliminate those laws all together. The whole concept of seizing property and after the fact forcing owners defend their innocence in court is terrible public policy. Bob Lewis

It would have been a better article if FNP provided more detail on what exactly led to the forfeiture for the Sowers. It is hard to comprehend how unfair it was when the reader does not know the whole story

We know enough of the story: the Sowers weren't charged with a crime. No one who hasn't been charged and convicted of a crime should have their assets seized.

If you want the details of their particular situation, search the FNP archives.

Very glad to see Senator Hough taking a lead on this important reform. Civil asset forfeiture has been abused across the country and goes against a fundamental concept in our laws - innocent until proven guilty. Supporters of this shameful practice back it for one reason - the money - and it comes at the expense of our rights

FNP could have provided a better story if they would have reported on the facts that caused the forfeiture. It is hard to comprehend the unfairness when the reader does not know what events occurred to get it to that point

Posting your same comment over and over again does nothing to strengthen your argument. As was said previously, if you want to know the particulars, look in the FNP archives....