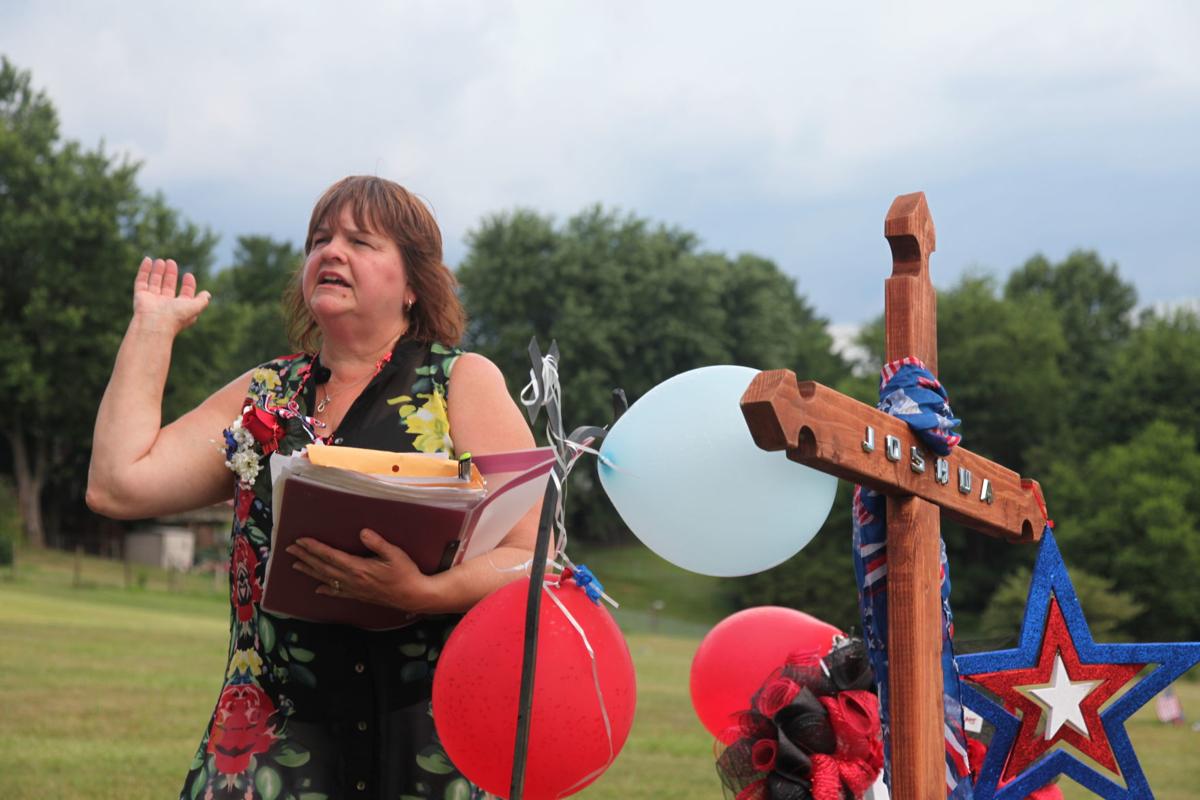 Terry Horman lists the progress that she and the Frederick County Sheriff’s Office have made in investigating the slaying of her son, Joshua Wayne Crawford, who was found dead in his apartment on his 21st birthday in 2003. Crawford would have turned 37 on Tuesday. 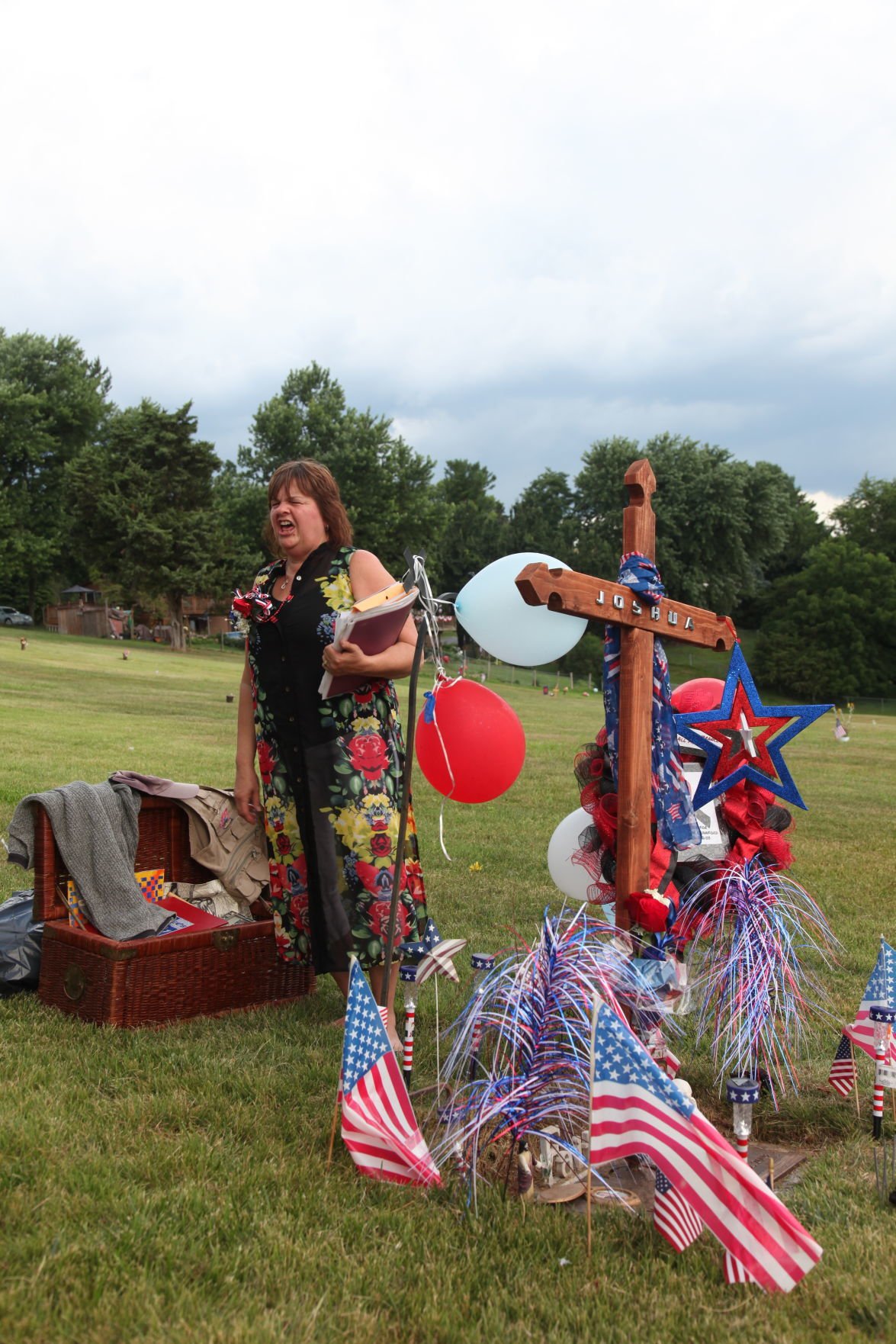 Terry Horman lists the progress made by herself as well as the Frederick County Sheriff’s Office in the 16 years since her son, Joshua Wayne Crawford, was found dead in his apartment on his 21st birthday in 2003. Crawford would have turned 37 on Tuesday. 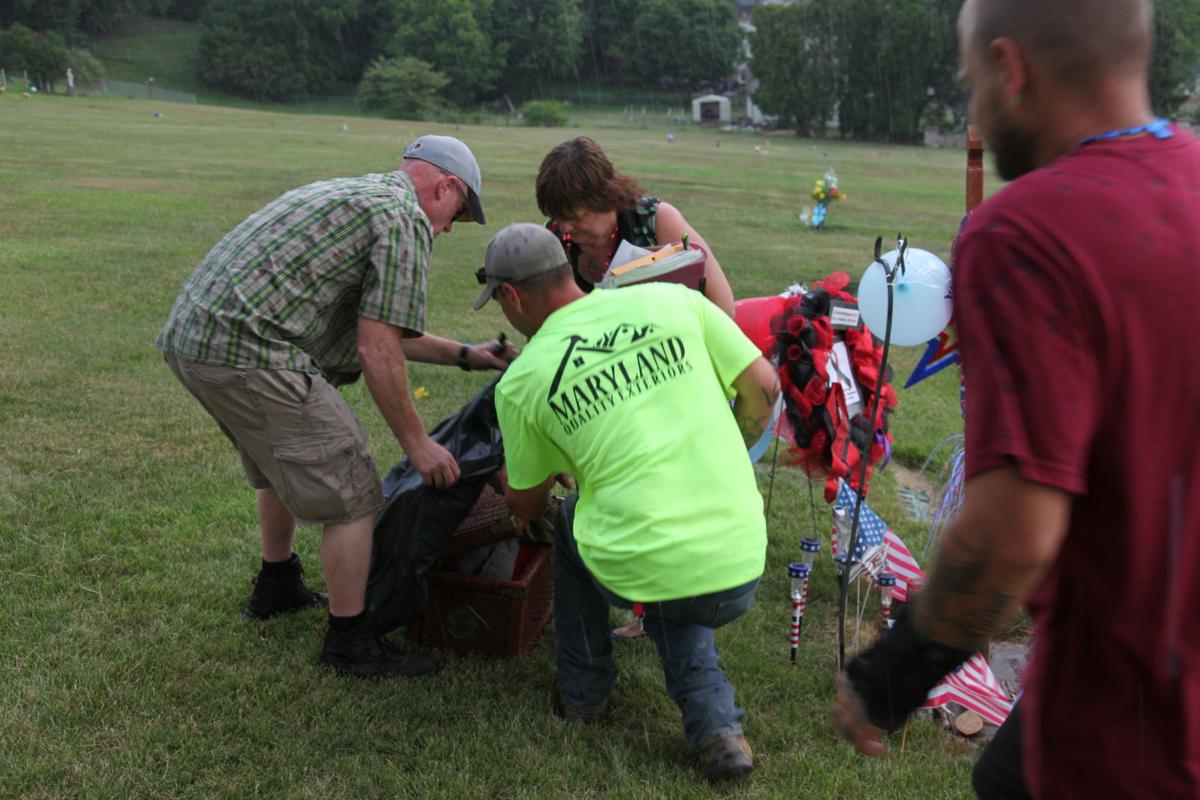 Terry Horman lists the progress that she and the Frederick County Sheriff’s Office have made in investigating the slaying of her son, Joshua Wayne Crawford, who was found dead in his apartment on his 21st birthday in 2003. Crawford would have turned 37 on Tuesday.

Terry Horman lists the progress made by herself as well as the Frederick County Sheriff’s Office in the 16 years since her son, Joshua Wayne Crawford, was found dead in his apartment on his 21st birthday in 2003. Crawford would have turned 37 on Tuesday.

About five minutes into Terry Horman’s speech Tuesday at her son’s grave, raindrops began to fall over Clustered Spires Cemetery in Frederick. What began as mere drizzle almost instantly turned into a deluge as the dark clouds looming overhead let loose.

The rain didn’t deter Horman, who rallied the small group of her son’s friends and relatives under the boughs of a large tree nearby, determined to ride out the storm. Rain was nothing compared with the tears she has shed in the 16 years since her beloved son, Joshua Wayne Crawford, was found dead in his Frederick apartment.

“Back when I had him, they still had the fireworks on Seventh Street for the Fourth of July,” Horman said, remembering how she had spent the holiday in 1982 at Frederick Memorial Hospital with her newborn, watching the colorful explosions in the sky. “He was just 2 days old, and I said, ‘Look! You’re my little firecracker baby!’”

Just over two decades later, on Joshua’s 21st birthday in 2003, detectives found him dead from asphyxiation. Duct tape covered his nose and mouth and his wrists and ankles were bound, according to an autopsy report. Crawford had also suffered blunt force trauma to the head as well as stab wounds. That detectives found no signs of forced entry led to early and lasting speculation that Crawford knew his killer or killers and let them in.

While the rain interrupted the annual ceremony Horman organizes, during which she had planned to offer prayers and light sparklers in memory of her son, Horman had just enough time to announce the most recent update in the case.

Not updates from the Frederick County Sheriff’s Office, which is handling the official cold-case investigation into Joshua’s death, but the steps Horman has made in her own, separate investigation.

“I’m tired of the Frederick County Sheriff’s [Office] because they aren’t doing anything. All the names that they’ve gotten is from what I’ve turned in to them,” Crawford said, referring to six names Horman suggested to sheriff’s office investigators a year ago to interview. “And they’ve only had an interview with one of those names of the six. One out of six in 12 months? That’s kind of a little ridiculous if you ask me, and it shows me that they’re not very serious about Joshua’s case.”

With that in mind, Horman was happy to announce that a new private investigator had recently contacted her with an offer to launch a separate, independent investigation of her son’s death.

Samuel Hanna spent 38 years as a deputy in the Madison County Sheriff’s Department in Madison County, Indiana, before serving as chief of the Elwood Police Department, also in Indiana. Now retired from professional law enforcement, Hanna works as a private investigator and got in touch with Horman after learning about Joshua’s case on Facebook.

Frederick County Sheriff Chuck Jenkins, reached by email, had a different opinion of the attention and effort his agency has put into the case over the years.

Jenkins pointed out that he himself had worked on the investigation early on, when he was a detective in the sheriff’s office’s major crimes section before he was first elected to run the agency in 2006. The sheriff stands by his detectives today, saying that solving the case has remained a priority.

“There was no setting aside the priority, or lack of effort or attention on the part of this agency or anyone involved in the investigation. Every lead has been thoroughly investigated until exhausted,” Jenkins’ response reads in part. “I’m sorry if Ms. Horman feels otherwise, but I can only assure Ms. Horman and her family that our goal is to bring the person [or persons] responsible for Joshua’s murder to justice.”

Despite the sheriff’s insistence, Horman said she has frequently found herself at odds with the agency. She said she was frustrated by how many different detectives were cycled in to handle the case and that she struggled to get updates until she obtained the free legal services of a staff attorney for the Maryland Crime Victims’ Resource Center just last year.

Along with a regular annual update on the case — which Horman said is how she knows only one of the people whose names she provided was contacted — the lawyer also helped Horman retrieve some of her son’s possessions that were seized as evidence.

Despite the fact that Joshua was wearing more than $1,000 in jewelry when his body was found — Horman had it appraised when it was released to her in December to prove a point — only a few items were reported stolen. Horman points to this as further evidence that her son was targeted for reasons other than a mere robbery.

Recent victories aside, Horman has grown cautious over the years and said she was skeptical when Hanna approached her. To date, two other private detectives, a well-known psychic and several others have offered to help solve Joshua’s case. While she said each was helpful, none of them led to much success.

The friends closer to home have further jaded Horman, who managed to express her frustration before the rain started on Tuesday.

“I’ve had people befriend me, wanting to get all up in Joshua’s case,” she said, her face strained with emotion. “They’ve come right up to my door, ‘Oh, I’ll help you, Ms. Terry!’ ... But they all just wanted to be closer to me to get updates in Joshua’s case. It’s only for information about Joshua’s case. It’s kind of like they’re being my friend for the wrong reason, it’s insincere.”

Still, Hanna vowed to hit the case head-on, even going so far as to state that he is fairly certain who killed Joshua based on his conversations with Horman and another unnamed source he was in touch with in the Frederick area.

Hanna has yet to come to Frederick, saying he needs to make sure he is properly licensed before traveling to Maryland. In the meantime, he plans to continue gathering information and solidify his case. Once his work is done, Hanna said he has two options available, the first being to contact the Frederick County Sheriff’s Office.

“I’m going to encourage them to take a stronger interest in the case or, if they can’t get motivated, I’m going to take it to the FBI,” Hanna said.

Back at the cemetery, the rain poured on and the wind picked up, blowing over a wreath Horman had set up next to the stone marker and the big wooden cross she plants every year with the name “Joshua” engraved on the cross section.

When one man apologized to Horman, telling her he had to leave to leave to attend a class in Hagerstown, Horman reluctantly decided to dismiss the gathering rather than force them to stay huddled under the tree.

“Well, we’ve had nice weather every year up till now, I guess,” she said with a sigh as she thanked those who made it out, shaking a few hands but mostly hugging.

The rain aside, Horman left with her head held high, confident in the knowledge that her perseverance and outspokenness was getting results. On the western horizon, stray rays of sun peeked through the clouds.

I'll remember that name Jenkins. I'll vote him out next time.

I'm seeing a pattern here with the FCSO dropping the ball on pursuing and solving cases. The Sherf says he was the investigator on the case. Ok, well, that says it all. During his tenure as detective first class, he maintained the lowest case closure rate in the dept. During his tenure as detective first class, the (now) Sherf wrongfully arrested a male subject in the Thurmont area. The Halloween 2018 Cactus Flats homicide case has been swept under the rug. Like it never happened. I'm reminded of the Dakota James death in Pittsburgh. The police to this day want nothing to do with the case. The police didn't even want to look for Dakota's body. His mother and family and friends were on their own to find the body; which was found clothed and fully in tact floating down the river. Typical government employees, don't want to do their job, purposely avoiding paperwork.

Keep us posted, Terry. Is there any sort of social media page (Facebook) dedicated to your investigation that we can follow?

chucky worked on it? No wonder it has not been solved

during the recent election season, a FPD officer wrote something along the lines on facebook: "When Jenkins was a detective, he was too busy campaigning while the rest of us in law enforcement were doing our jobs".

Ms. Horman, my name is Deborah Harmon and lived in the apartment directly across from Joshua. I spoke with the detectives twice and gave him information about a car I saw outside that day. I don't know if they ever did anything to follow up on it or not. If you see this and want to follow up with me please let me know. I can promise you, I don't want info from you, I just want to make sure you got the info I gave to the police that day.

Another well-written article from Jeremy Arias. Thank you! This mom’s persistence will surely lead to the truth.