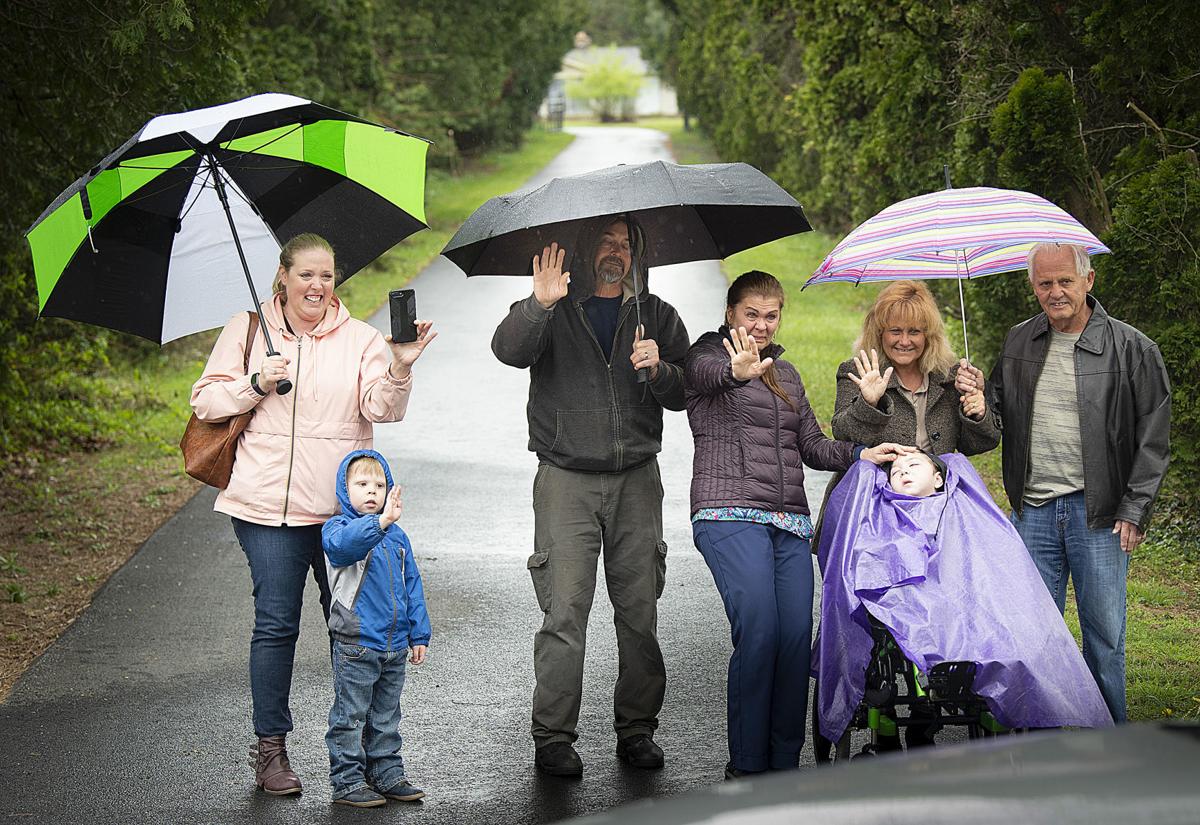 The grandparents and family friends of Isaac and Noah Cawart wave to a long line of friends and neighbors that paraded by the brothers’ home near Mount Airy. The brothers will leave Mount Airy Friday to live with their grandparents in Florida. 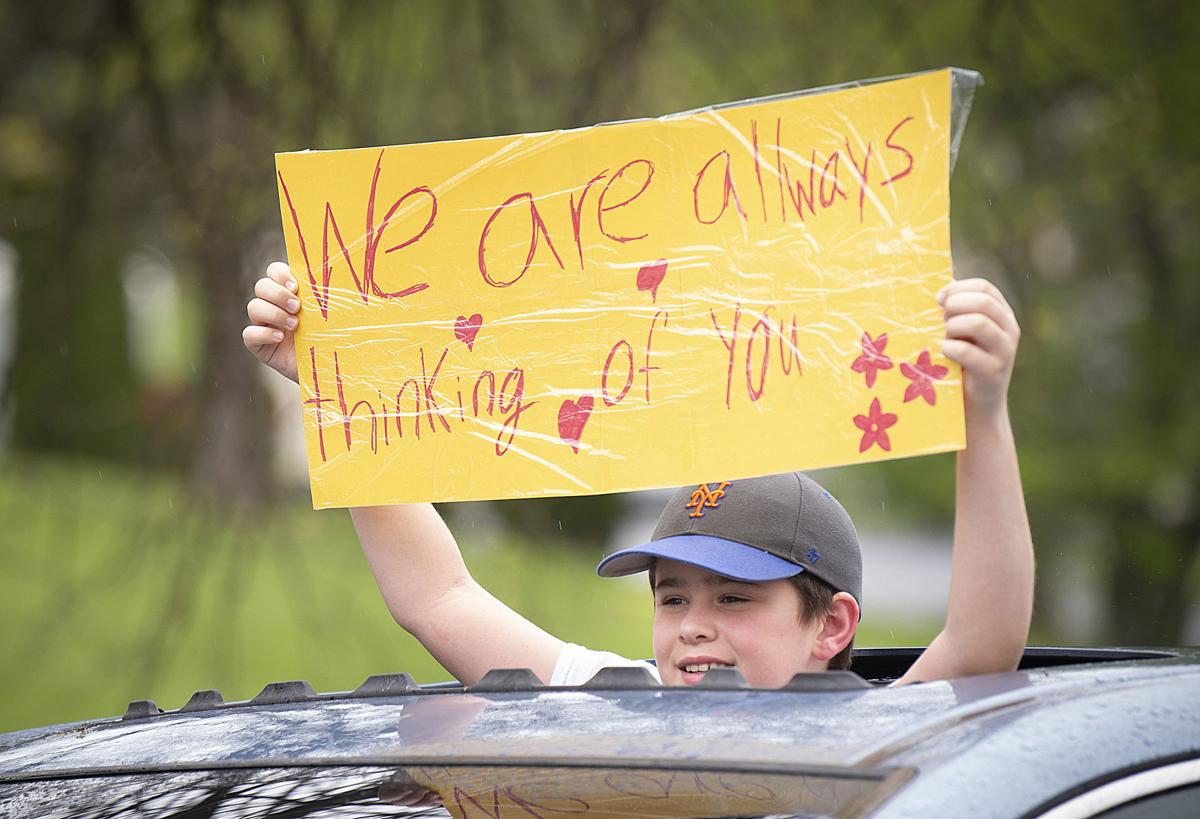 Jackson Piersall, 10, holds a sign out of the window of his parents’ van at a parade held Thursday afternoon to wish Isaac and Noah Cawart goodbye. The brothers will leave Mount Airy on Friday to live with their grandparents in Florida.

A parade was held Thursday afternoon to wish Issac and Noah Cawart goodbye.The brothers will leave Mount Airy Friday to live with their grandparents in Florida.

In a parade full of police and fire engine sirens, honks, shouts and signs, Mount Airy bid farewell to Noah, Isaac and Shayla on Thursday afternoon as the two boys stood in their front yard and Shayla watched via FaceTime.

The children’s lives were upended in a devastating tragedy April 2 when their mother, 36-year-old Heather Zujkowski, was shot and killed by her estranged husband and the two boys’ father, 35-year-old Joseph Zujkowski, in front of her and the children’s home in the 7900 block of Bennett Branch Road. Joseph Zujkowski also shot and killed a neighbor, 18-year-old Noah Homayouni, before returning to his home in Gaithersburg and abruptly taking his own life in front of Gaithersburg city and Montgomery County police officers, according to previous stories published in The Frederick News-Post.

Anyone interested in donating to help pay off the van purchased for Isaac can send checks made out to MADRF (the Mount Airy Disaster Relief Fund) with "Beverly Cowert" written in the memo line. Checks should be sent to the following address:
NWSB Bank

While Shayla, who is 11, left for Georgia to live with her father a few days after the shooting, Valerie Bartel, a friend of Heather’s and the godmother of all three children, did her best to keep 4-year-old Noah and 6-year-old Isaac’s minds off of the traumatic loss with the help of Heather’s parents, Beverly and Gene Cowart, who drove up from their home in Panama City Beach, Florida.

As the day neared for the boys to return to Florida with their grandparents, Bartel had an idea to invite friends and well-wishers to participate in a parade to bid the children farewell.

“It was me and another neighbor who I bounced the idea off of, like, ‘How about doing this?’ Because I wanted to do something to honor them,” Bartel said Thursday. “I want to do more for these boys, as much as I can, and for Shayla, and I want to stay in their lives, but I don’t know what the future holds, so this is my way of giving it my all for them right now.”

By Thursday the parade received the support of the Mount Airy Police Department, a local fire station, Coexist Stables, where Shayla took horse riding lessons, Noah’s martial arts academy, Mount Airy Mayor Patrick Rockinberg and many others. Shortly after 4 p.m., as the children stood in front of their home surrounded by family and loved ones, a procession of more than 50 vehicles began slowly rolling down Bennett Branch Road.

For the children, the parade was an unexpected moment of joy during a difficult time, allowing Shayla to see her friends, including her riding instructors, classmates, teachers and other members of her Girl Scout troop. The display of support also had a very powerful effect on the boys’ grandparents.

“Well, you can see from my face that I’ve been crying,” Beverly Cowart said wiping her eyes. “I didn’t expect that many people, you know? I knew that close friends and family [would be here], but not how many more from the actual community, including the boys’ school and Coexist and [Heather’s] neighbors and friends and church friends, the whole community.”

To many in Mount Airy, Heather, a former Army servicewoman, was well known for helping out various charitable organizations and programs, such as delivering food to needy families, volunteering at her church in Damascus and at her children’s schools, among many other acts of service, Bartel said. Heather was also an outspoken advocate for an inclusive park to be built in town that would be more accessible to children like Isaac, who has cerebral palsy.

The children were equally beloved and had many friends, said Julie Piersall, whose daughter, 13-year-old Emily, knew Shayla through Coexist Stables and whose son, 10-year-old Jackson, took martial arts classes with Noah at Tristar Martial Arts Academy. While Julie drove in the procession, Emily waved and shouted out to Shayla on FaceTime and Jackson held a sign out of the sunroof of the family’s vehicle that read “We are always thinking of you.”

“I spent a lot of time with Shayla, I met her in the barn at Coexist and she would help me out in the barn and we both joined pony club together,” Emily said, adding that she was devastated to learn what Shayla’s family had gone through and that Shayla would be moving. “It was really sad. It’s sad because we won’t be able to see them anymore, I won’t be able to see Shayla.”

As the parade neared its end, one last vehicle, a specially-modified 2016 Dodge Caravan with a giant red bow wrapped over its roof, pulled up to the house and came to a stop in front of the family. The result of an ongoing fundraising effort from the Mount Airy Disaster Relief Fund, the van was the town’s final parting gift to the Cowarts, who were in desperate need of a vehicle with a lift to help them get Isaac in and out.

When the disaster fund realized the grandparents wouldn’t be able to lift Isaac in and out of a vehicle as easily as Heather used to, they quickly set out to find a vehicle and begin raising money, said Ellie Bonde, who volunteers with the fund.

“Eventually, a vehicle with a lift was located and we put out the word to try to solicit money while agreeing to be a conduit for the money,” Bonde said, adding that about $5,000 had been raised as of Thursday. “Over these last three days we’ve gotten the attention of all of the service groups in town, we’ve gotten the attention of veterans groups and of course the mayor and others.”

With additional help from Joe DiGiorgi, who owns two local car dealerships in Mount Airy, the van was brought to Mount Airy and added to the parade route to surprise the Cowarts, who knew about the fundraiser but did not know the vehicle had arrived Thursday afternoon.

“I want to thank them for all of their support, every aspect from trying to get the vehicle to personal comments people have left on Facebook,” Beverly Cowart said. “Heather didn’t realize how many people she touched, and I wish that she could have been here to see that.”

Many prayers for them and I am sad that they could not all be together. You all did an amazing thing to show them that they are loved. This is a very sad but happy story.

This article made me cry both from sadness and joy. The sadness for the children and the joy from the humanity.

I imagine those kids have a tough road ahead of them but acts like this from good people and lots of continuing support will help ease their pain. Blessings.

The picture used on the front page has to be the happiest group of people celebrating a murder suicide ever. Wasn't there any better pics you could have used?

Why would you want to see them suffering and in pain? I'm sure it's a welcome relief for them to be able to smile. FNP - ignore user "captainamericarules" please.

Where were they “celebrating” a murder-suicide? That was not the story. It was an article to say goodbye to three children who’d gone through hell BECAUSE of a murder-suicide. Sheesh!