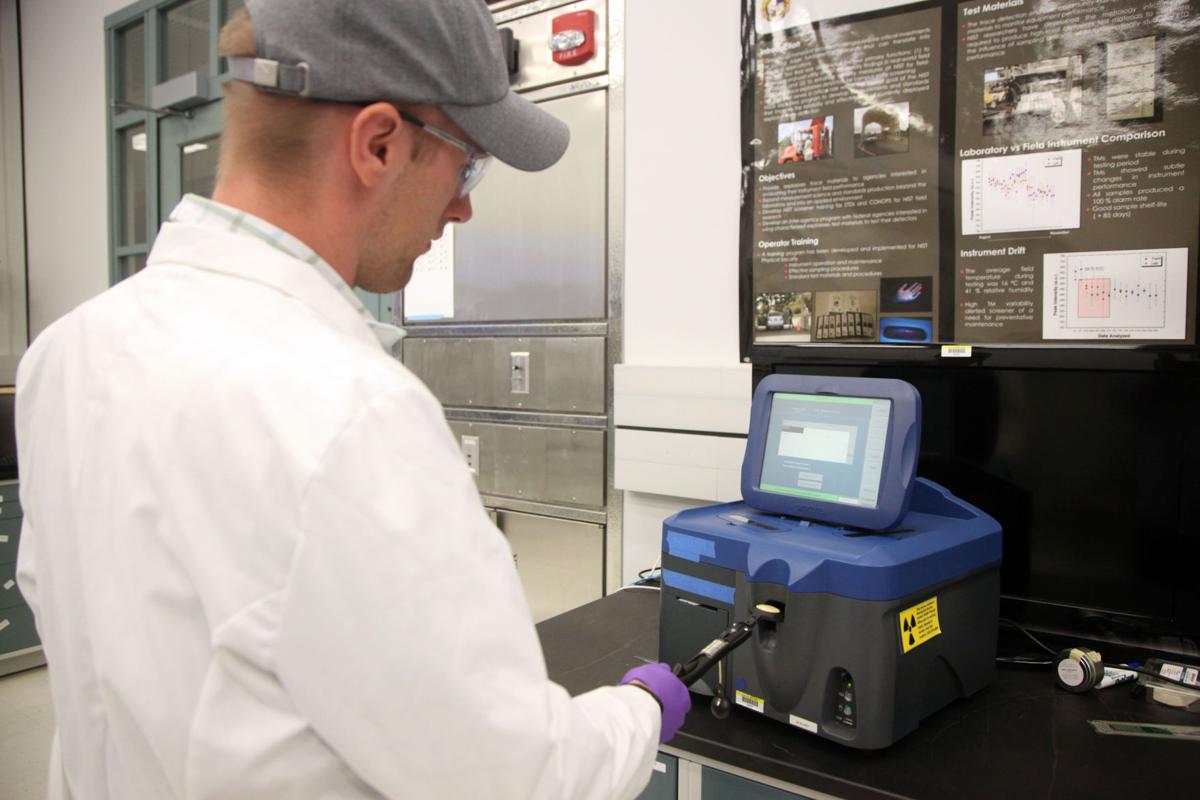 NIST chemist Ed Sisco demonstrates the use of an ion mobility spectrometer (IMS), an analytical instrument that he and fellow NIST researchers have shown can be used to detect the synthetic opioid fentanyl. 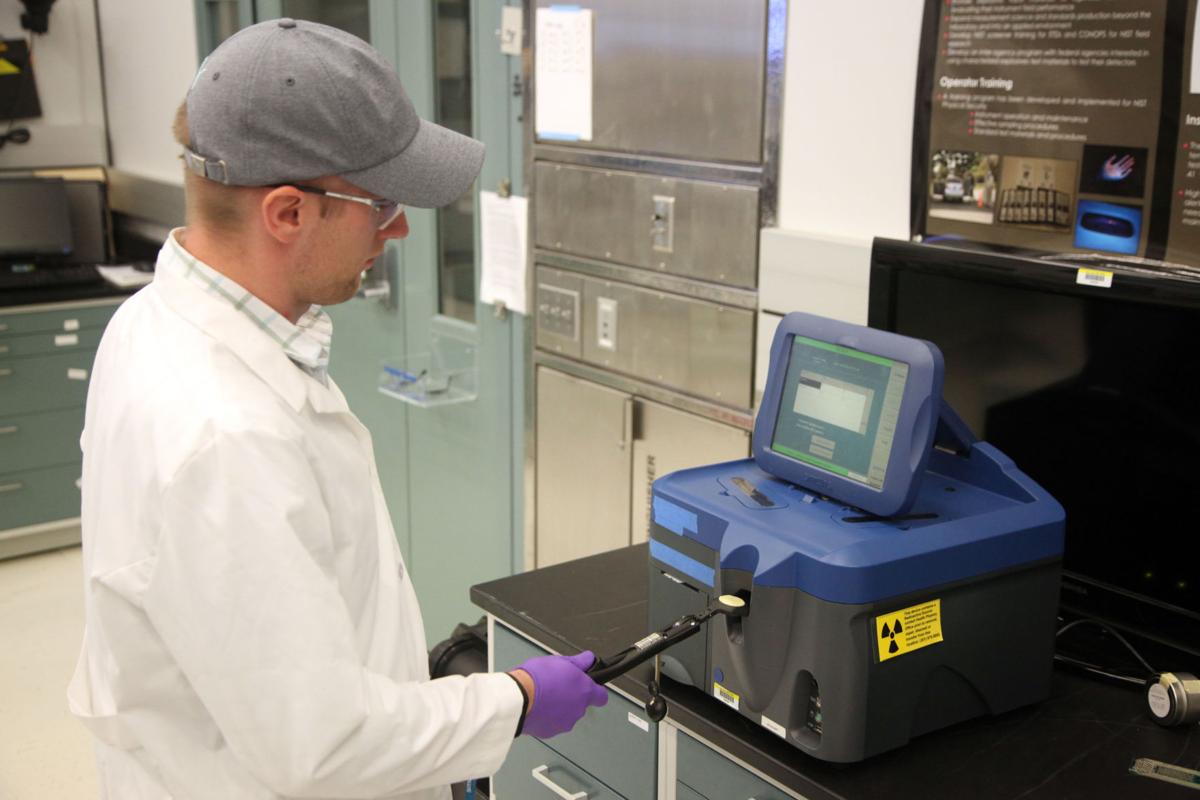 NIST chemist Ed Sisco demonstrates the use of an ion mobility spectrometer (IMS), an analytical instrument that he and fellow NIST researchers have shown can be used to detect the synthetic opioid fentanyl, even when it is mixed with much larger quantities of heroin or other substances. Police and other first responders might be able to use IMS technology to reduce the risk of accidental exposure to fentanyl.

NIST chemist Ed Sisco demonstrates the use of an ion mobility spectrometer (IMS), an analytical instrument that he and fellow NIST researchers have shown can be used to detect the synthetic opioid fentanyl.

NIST chemist Ed Sisco demonstrates the use of an ion mobility spectrometer (IMS), an analytical instrument that he and fellow NIST researchers have shown can be used to detect the synthetic opioid fentanyl, even when it is mixed with much larger quantities of heroin or other substances. Police and other first responders might be able to use IMS technology to reduce the risk of accidental exposure to fentanyl.

While no Frederick County sheriff’s deputies have fallen victim to an accidental overdose from exposure to opioids, the threat looms large over the entire agency.

“We did have a scare several months back where we thought one of our personnel may have come in contact with a substance, but he was checked out and he was fine,” said Lt. Jason West, who commands the Narcotics Investigation Section of the Frederick County Sheriff’s Office. “To my knowledge, we have not had one of those cases, at least with the sheriff’s office. I can’t speak for any of the other agencies, but we’re seeing it all around the region.”

West mentioned a Harford County sheriff’s deputy and two emergency medical providers who were exposed to fentanyl — a synthetic opioid that is many times more potent than either morphine or heroin — while investigating an overdose on May 19.

Fentanyl and many other synthetic opioids can be absorbed through skin contact, and even inhaling small amounts, could lead to potentially lethal overdoses for police, medical personnel and even K-9 dogs, West said.

Almost every law enforcement officer in Frederick County now carries a naloxone kit, which can temporarily reverse the effects of an opioid overdose. Naloxone, which is commonly marketed as Narcan, is typically used by police to revive people who have overdosed on drugs, but is also on hand should police themselves become exposed, West said.

“We carry several doses of Narcan with us as the narcotics section, in the event, God forbid, any of us would be overcome or affected by fentanyl or carfentanil on a case, so we would have the equipment necessary, Narcan on hand, to treat that,” West said.

Another problem stems from the different and seemingly ever-changing varieties of synthetic opioids that police encounter, West said.

Fentanyl, which began appearing with increasing regularity in Frederick County in 2015, is considered 50 to 100 times more potent than morphine, according to the Centers for Disease Control and Prevention.

Meanwhile, the latest synthetic opioid to begin appearing in overdose cases across the state, an elephant tranquilizer called carfentanil, is roughly 10,000 times more potent than morphine, according to the CDC. Carfentanil has been linked to four overdose deaths in Maryland in 2017 as of Friday — including a 53-year-old Frederick man who died April 7.

“The safety of our personnel is always in the forefront of everything, so that’s why we, as an agency, put out the directive to err on the side of caution,” West said. “We’re not going to ... test those substances in the field, we’re going to send them directly to the lab.”

“We’re pretty cautious with sampling as it is, we wear gloves, we wear masks, so none of us has been exposed to anything, but we also have Narcan in the lab just in case that happens,” Burns said. “We’ve switched to nitrile gloves, because we’ve learned that fentanyl can go through just regular latex gloves in some cases.”

In addition to all state police cases, Burns’ labs handle drug testing for cases in counties, including Frederick County, where local police don’t have access to their own labs. As a consequence, the backlog for testing samples can get a bit long, Burns said.

With first responders and forensic lab workers at risk of exposure to synthetic opioids, a Maryland-based federal research agency may have found a solution using existing technology.

In a series of tests involving 16 different types of synthetic opioids, scientists with the National Institute of Standards and Technology learned that two devices could not only accurately discern between the different drugs, but also accurately identify when even trace amounts of the synthetics are present in other mixtures, said Rich Press, a NIST spokesman.

Both the Ion Mobility Spectrometry (IMS) device and the Direct Analysis in Real Time Mass Spectrometry (DART-MS) machine are sensitive enough to determine the contents of a bag of drugs from trace elements on the outside of the plastic or container.

“There’s going to be some amount of residue that will escape to the outside of the bag,” said Ed Sisco, a chemist with NIST who worked on the study. “So you either don’t have to expose yourself, or you can determine to what level do you have to be concerned about the mixture inside the bag.”

Another benefit of the study was that NIST scientists — with the help of Burns and the Maryland State Police drug labs, which provided the samples used in the tests — recorded the unique signatures of each of the opioids they measured, Sisco said. If the information is widely disseminated, any agency using the devices could easily use it as a reference to identify those drugs using their own devices.

“With the IMS especially, it can be placed in vehicle or, say, police headquarters, to allow police officers to quickly screen any substances they’ve found and get a better idea of what they may be dealing with,” Sisco said.

As impressive as the devices may be, even the cheaper, more readily mobile IMS device costs more than $30,000. State police recently applied for a grant from the Governor’s Office of Crime Control and Prevention to purchase one of the more expensive, lab-friendly DART-MS devices for $125,000, Burns said. But the sheriff’s office wasn’t looking to buy either of the devices, West said.

After discussions with the Frederick County State’s Attorney’s Office, police are instead citing their “training and experience” in their statements of probable cause to justify drug charges in the absence of any form of field testing, West said.

“They would also put in their statement something outlining the dangers of field testing as to why the substance was not field-tested,” West said. “... So far we’ve had no issues with that in the courts, and I believe that’s likely because even the courts realize the nature and the dangers of handling those substances.”

Lt. Clark Pennington, who commands the Criminal Investigation Division of the Frederick Police Department, was out of town and unavailable for comment.