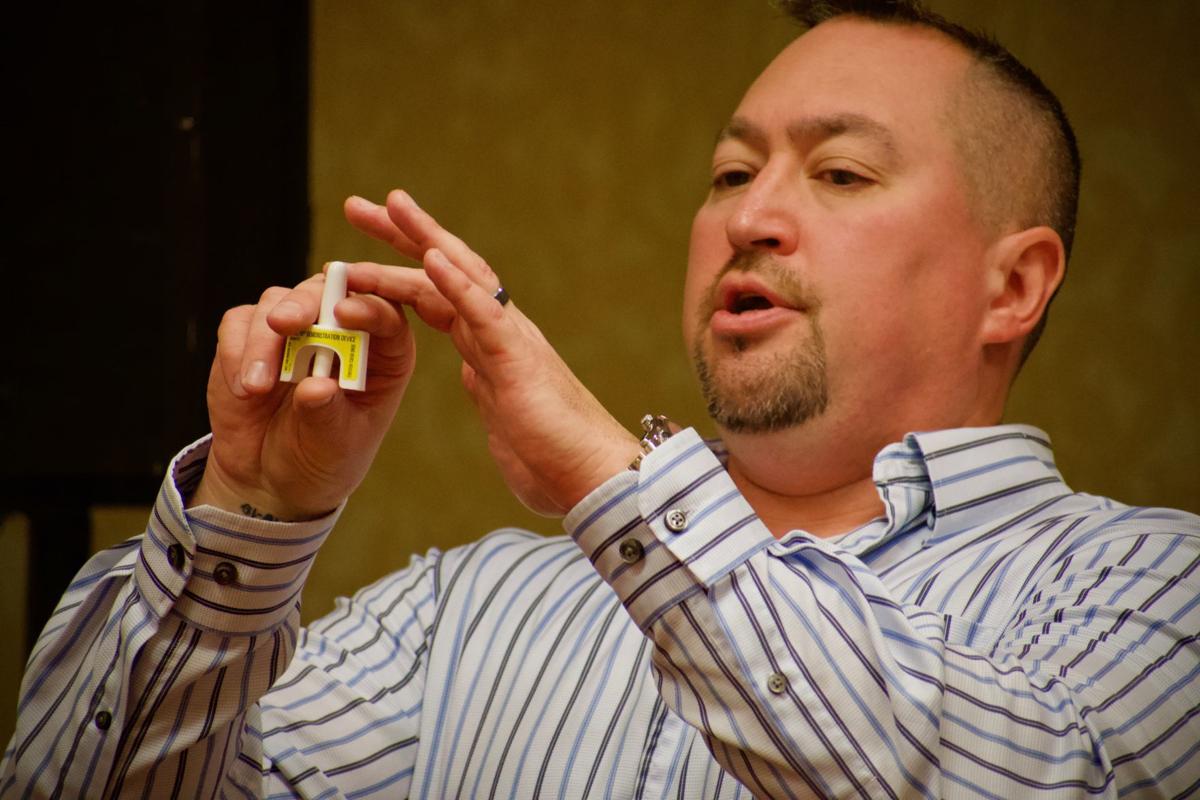 ABOVE: Jay Hessler, local addiction authority coordinator with the Frederick County Health Department, demonstrates how to use naloxone at the event.

LEFT: Marie Rau, director of marketing and events for the Maryland Chamber of Commerce, examines a simulated naloxone administrator. 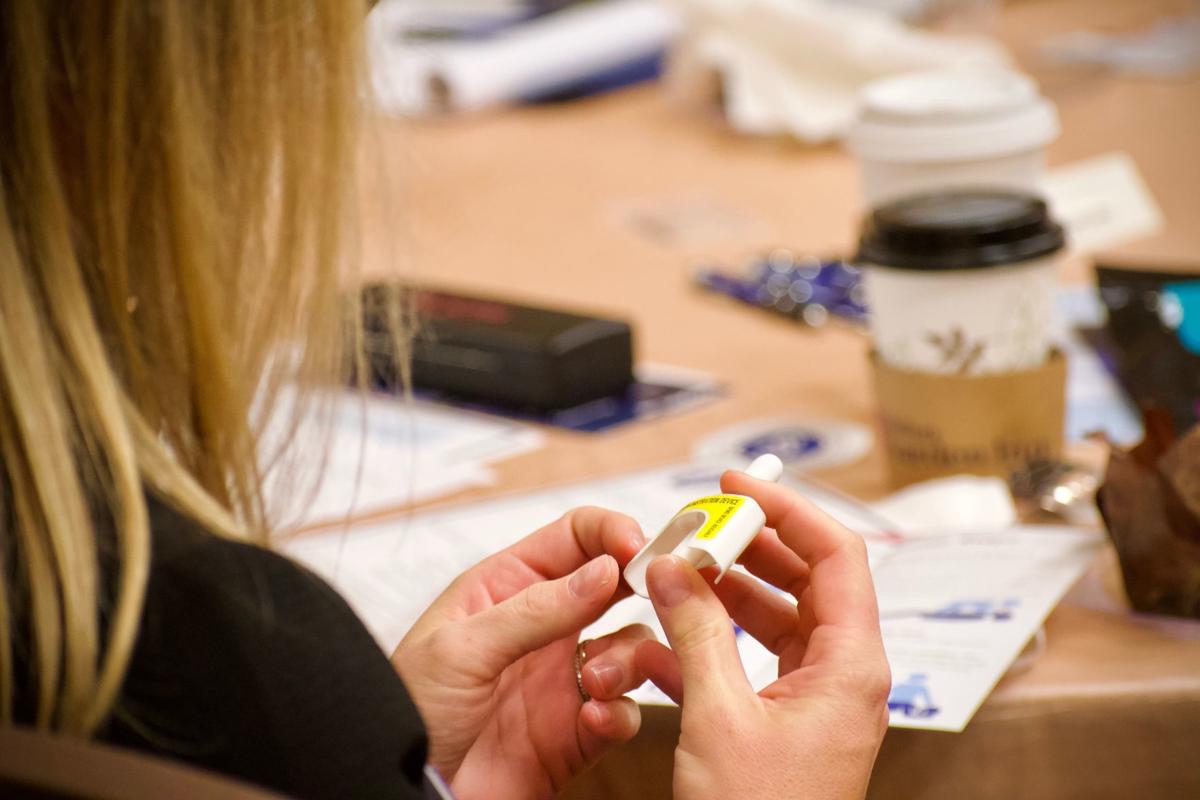 Marie Rau, director of marketing and events for the Maryland Chamber of Commerce, examines a simulated naloxone administrator. 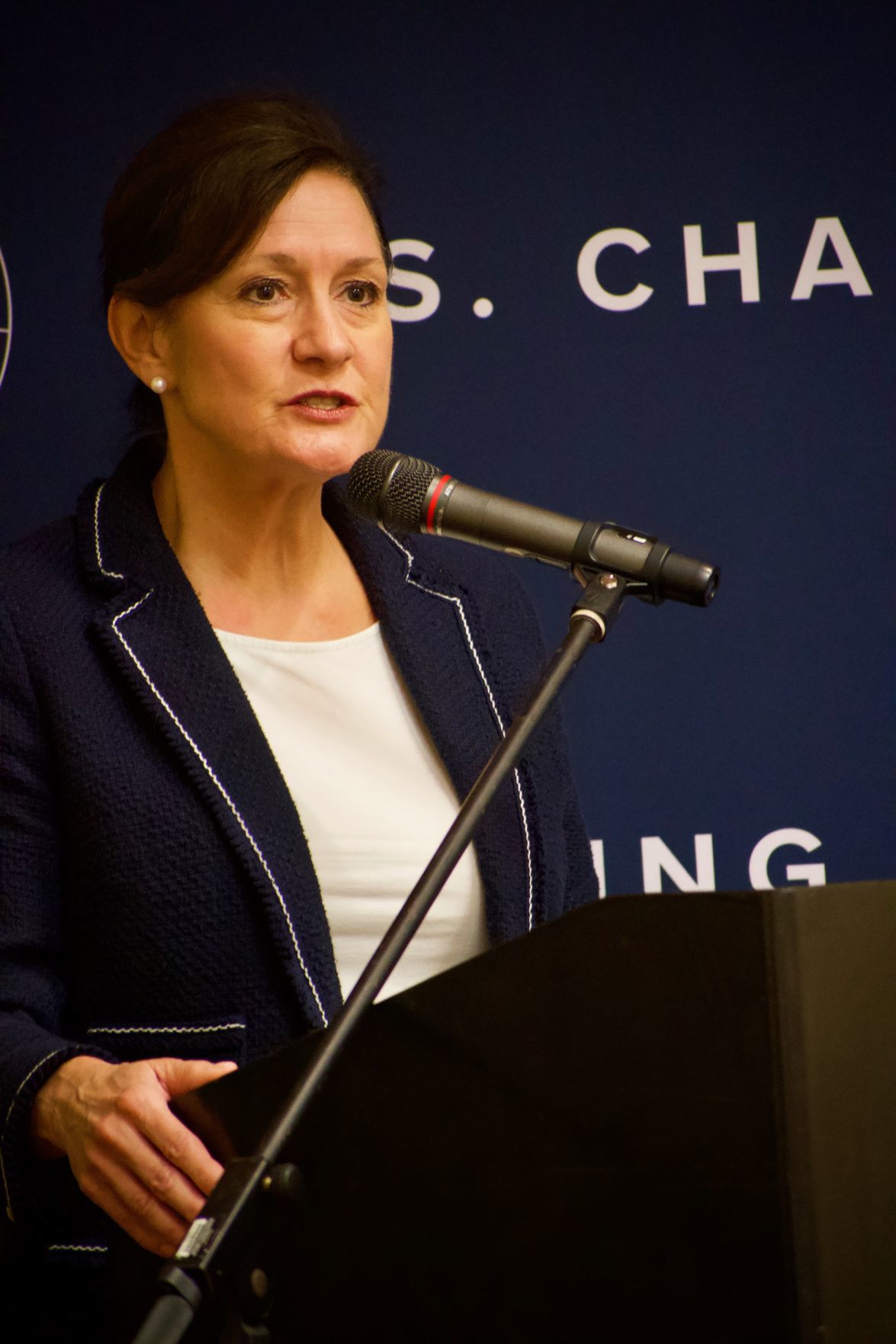 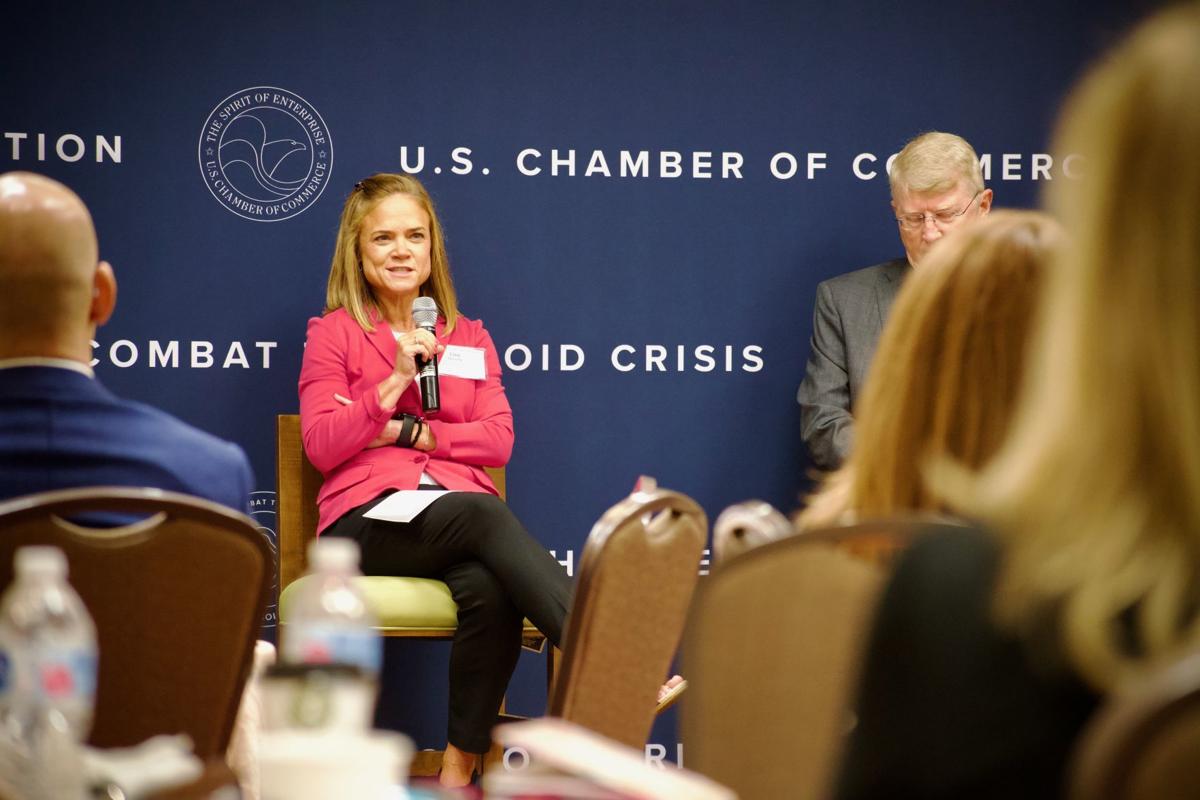 Lisa Dehorty, CEO of Maryland Center for Addiction Treatment, speaks at a panel discussion of success stories at a U.S. Chamber of Commerce Foundation event on opioids and the workforce.

ABOVE: Jay Hessler, local addiction authority coordinator with the Frederick County Health Department, demonstrates how to use naloxone at the event.

LEFT: Marie Rau, director of marketing and events for the Maryland Chamber of Commerce, examines a simulated naloxone administrator.

Marie Rau, director of marketing and events for the Maryland Chamber of Commerce, examines a simulated naloxone administrator.

Lisa Dehorty, CEO of Maryland Center for Addiction Treatment, speaks at a panel discussion of success stories at a U.S. Chamber of Commerce Foundation event on opioids and the workforce.

A few months after losing his son to a heroin overdose, John Hindman finished typing an email.

The subject line: A Father’s Request.

Then he hit send. The email went to Roger Krone, chief executive officer of Leidos.

Hindman, senior international and public affairs adviser for Leidos, contacted Krone to inform him of his son’s overdose, as well as to tell him more about the ways the opioid epidemic weaved its way into the company.

Hindman was far from the only employee who had a loved someone with substance use disorder.

A few days after his son died, Hindman spoke with an employee in information technology about a virus on his computer. He had delayed IT’s work in order to go to his son’s final viewing. When he explained, the IT employee told him that his child also had a substance use disorder.

Krone responded to Hindman’s email and met with him six weeks later. Since then, he launched efforts at the company to better address the opioid crisis. Just this month, the company announced a partnership with the Baltimore Ravens where the company will donate money toward such efforts for every tackle a Ravens player makes.

When people think about the opioid epidemic, attention is mostly on the public health and public safety sectors. But the opioid crisis affects businesses as well, said Christine Ross, CEO and president of the Maryland Chamber of Commerce.

That’s because the opioid epidemic touches so many lives, said Rick Weldon, president of the Frederick County Chamber of Commerce. If it’s not the employee, it is the employee’s loved ones.

The businesses have an opportunity to influence public opinion and have difficult conversations about opioids and the stigma associated with them, he said.

They did not find a lack of resources, but they wanted to bring resources together and make it easy and accessible for employers. The panel discussions, like the ones held in Frederick, were one way to help, Traver said.

The Sharing Solutions events saw two panels — one of experts and one of success stories — before a short training session on administering naloxone by the Frederick County Health Department.

Hindman sat on the first panel, mostly focused on telling people about the opioid crisis and ways businesses can help their employees.

Jay Ruais sat on the second, which focused on employing those who have issues with substance use — like Ruais.

Ruais was interning on a congressional campaign when he was pulled over and charged with drinking and driving. It was his second time.

He was honest with his employer, and he ended up being hired to continue to work on the campaign. He is now the chief of staff for the Addiction Policy Forum.

By sharing his story, he hopes to eliminate some of the stigma around those with a substance abuse problem, he said.

Employers can play a massive role in the lives of the 20 million people who have substance use disorder, he said. He is an example of what happens when an employer takes a chance on an employee.

Great article. We have to educate everyone. Knowledge is power. The biggest barrier is to make people understand that addiction does not discriminate. It the “Stigma” around all mental illnesses that keep people from reaching out for the help that they deserve