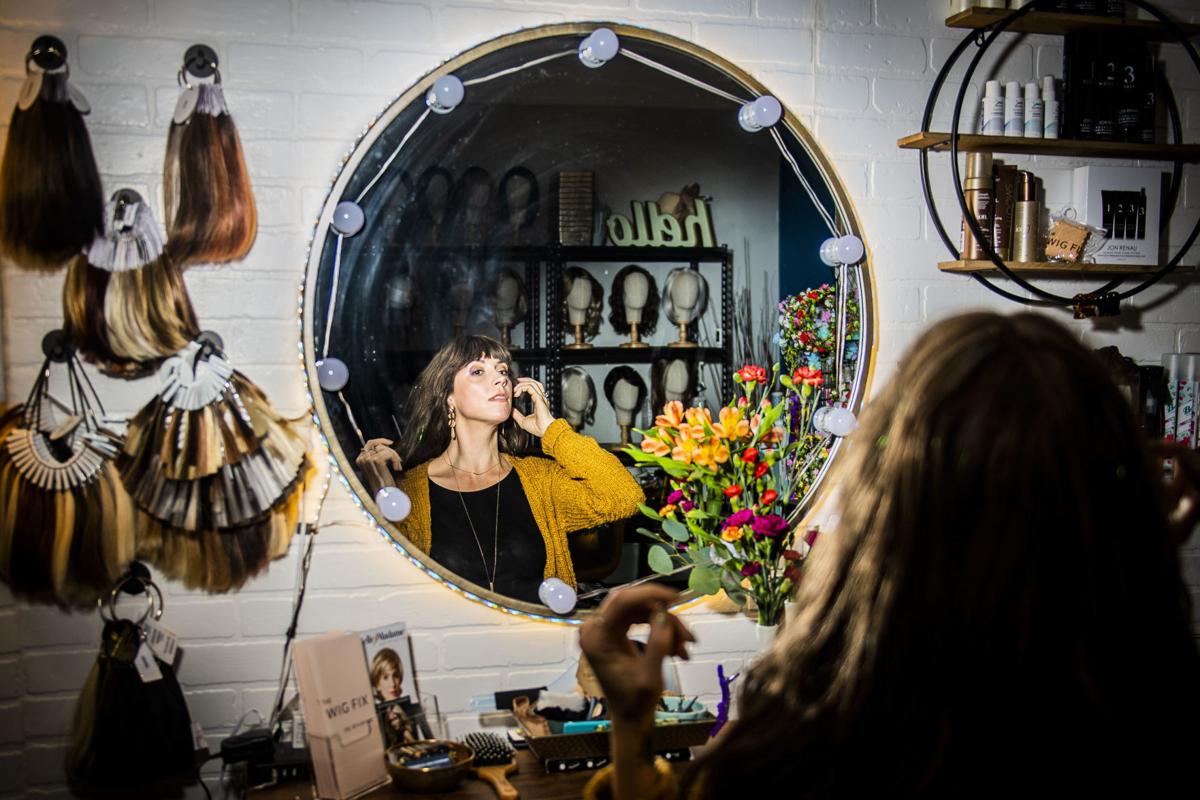 Rachel Anne Warren, sits for a portrait in the Frederick Wig Company downtown on Tuesday. Warren started the company earlier in October and does alterations and customizations of wigs she purchases. 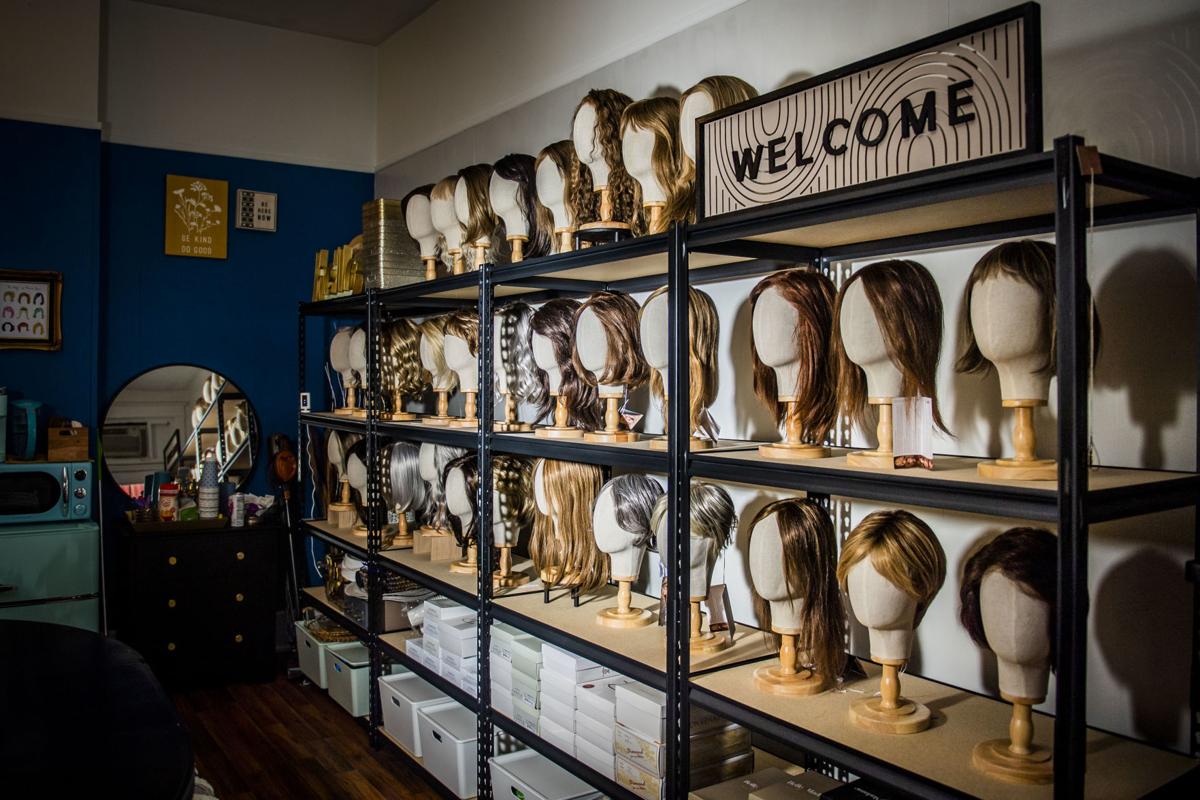 Wigs are displayed in the Frederick Wig Company downtown on Tuesday. Rachel Anne Warren started the company earlier in October and does alterations and customizations of wigs. 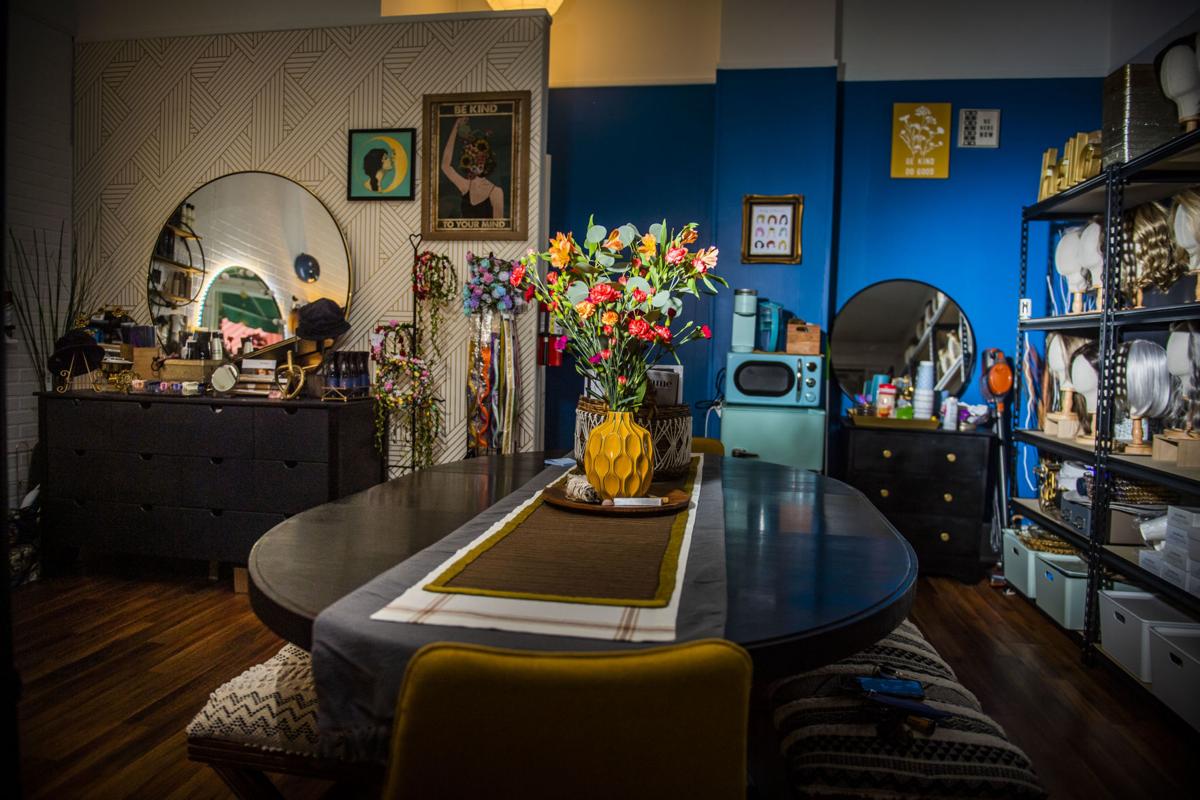 The interior of the Frederick Wig Company downtown on Tuesday. Rachel Anne Warren started the company earlier in October and does alterations and customizations of wigs.

Rachel Anne Warren, sits for a portrait in the Frederick Wig Company downtown on Tuesday. Warren started the company earlier in October and does alterations and customizations of wigs she purchases.

Wigs are displayed in the Frederick Wig Company downtown on Tuesday. Rachel Anne Warren started the company earlier in October and does alterations and customizations of wigs.

The interior of the Frederick Wig Company downtown on Tuesday. Rachel Anne Warren started the company earlier in October and does alterations and customizations of wigs.

When Rachel Anne Warren was in her 20s, she was a singer in a rock band.

In a bright blue wig and funky costumes — sometimes featuring a tutu or twinkle lights — she’d dance around the stage, belting out lyrics in a strong, powerful voice.

But when Warren wasn’t performing, she was almost unrecognizable.

“I’d wear a baseball cap, I’d wear all dark colors, I’d kind of hide in the corner,” she recalled thoughtfully. “People would be like, ‘You’re so different.’”

Around the same time as her rock star days, Warren had been diagnosed with androgenic alopecia, a genetically determined disorder that causes hair loss.

Although the condition affects millions in the United States — and even more around the world — Warren felt ashamed by it. She didn’t want to talk about her hair loss. Instead, she tried to camouflage it. Her embarrassment kept her from having close, personal relationships with other people, she said.

On a recent afternoon, she sat perched on a bench inside of a small salon on North Court Street in downtown Frederick, her face framed by a thick, wavy crown of locks interspersed with shimmery green strands of hair. A few feet away, the heads of more than a dozen mannequins stared back at her from a row of shelves. Each one was covered in a shag of hair — some brown, others blonde, black or dark red.

Welcome to the Frederick Wig Company: a boutique and studio where Warren sells ready-made medical wigs and hairpieces.

Though the shop has only been open since Oct. 2, Warren says she has already had more than a dozen customers. Inside the privacy of her salon, she helps people try on hairpieces and choose colors that best suit them. Warren, a trained wig maker, also offers alterations and customizations.

It can be an intimate process. Many of the people who walk through her door are anxious about having someone look at their hair, even if they typically don’t wear a wig in public. Talking about their experience — saying, “This is me and this is my hair loss” — can make people feel vulnerable, Warren remarked.

“[Hair is] just this seemingly essential element that — especially when it’s waning, when it’s thinning and there’s a little bit left — it just can rock a person’s sense of identity,” she said. “You don’t look like yourself, you don’t feel like yourself. And it’s hard to go out into the world and have a brilliant light or even a decent constitution if you don’t feel good about yourself.”

Sometimes, Warren will pull off her own wig when she is showing people how to wear and style theirs. She thinks this helps her build credibility among her clients. Wigs are expensive, she said, and so is hair — especially human hair. She has invested tens of thousands of dollars into her inventory because she is confident in the products she carries. She has worn them herself every day for years.

Taking off her wig also tells her clients, “‘Hey, I hear you,’” Warren said with a laugh. “‘I have lived this life for a while.’”

Jenn Bakale met Warren a little over a year ago. She had recently been diagnosed with the same type of alopecia Warren has and was thinking about starting to wear a wig. It was an emotional decision: Her mother also has alopecia, but she didn’t start wearing a wig until she was in her 60s. Bakale, on the other hand, is 42.

During their consultation, Warren was so compassionate and understanding, Bakale remembers. Seeing how comfortable she was with wigs and hairpieces put her at ease. Warren wound up making Bakale a custom wig topper that quickly became one of her favorites to wear.

“She really has a knack for normalizing hair loss at all ages,” Bakale said, “and just making you feel supported and beautiful in whatever you’re gonna choose — whether it’s being bald or wearing a hairpiece or full wig or whatever.”

Warren began training under Michael Meyer — a German-born master wig maker and teacher — about three years ago, but she’d been experimenting with wig making even before then. If she could sew her own costumes, she figured, maybe she could fix up some of the wigs she had and make them look more natural.

She quickly became hooked. At the time, she was working as a wedding singer and would spend upwards of 50 hours each week practicing her wig-making skills after performing at gigs on the weekends.

She’d feverishly make a wig, then wear it to a TJ Maxx or another store she seldom visited. Then, she’d walk around, pretending to shop, when she was actually conducting a kind of experiment.

Wig making is tedious work; the hair must be knotted in place one strand at a time in a process Warren compared to “knitting on a micro level.” Each square inch takes at least an hour to complete. Finishing a full lace wig can take 100 hours or more.

Still, it has brought Warren so much joy.

“I had just felt so bad about myself,” she said. “I didn’t realize how much that infected every other part of my life . . . [Wig making] just changed everything. Being happier with myself in that regard makes you a better human towards others — makes you compassionate. Everybody has something that they’re struggling with.”

Not all of Warren’s clients are dealing with hair loss. Some just aren’t happy with their hair or are looking for a change. Many, however, have recently received scary — sometimes terminal — diagnoses.

Of these people, it always amazes Warren how many tell her that what they are the most upset about is losing their hair.

“They don’t want it to be written across their face that they’re sick,” she said. “Like a limb, our hair is a part of us. It’s a signal to other people that something’s wrong when it’s not there. And sometimes you just want to feel normal.”

So many of her clients’ stories have stuck with Warren over the years. There was the woman who took so much pride in her pearly white hair and wanted a wig to wear to her funeral. Another woman had come to Warren after her doctor told her she had months to live. She’d wanted a wig so she could continue looking like herself for as long as possible and avoid traumatizing her two young children any more than she had to.

Then, there was the middle schooler who came to Warren after a cancer relapse. Her parents wanted her to get a wig that looked like her natural hair, but Warren managed to slip in a few colorful hair-pieces into the mix. The teenager was immediately drawn to one that was a fiery, cranberry red.

“She was like, ‘Daddy would kill me,’” Warren remembered, her eyes crinkling into a smile under her mask. “I was like, ‘That’s why you do it!’”

Over her lifetime, Warren has tried out a lot of different careers. She’s worked in a brewery, been a massage therapist, a writer, a singer. She even went corporate for a decade.

But she always seems to make her way back to the “hard stuff.” Her brother got sick when they were both children and she cared for him with her sisters until his death. Later, she was her best friend’s caregiver when she was diagnosed with leukemia in their 20s.

“If I can sit and be part of that and be someone who’s not shocked and isn’t scared to be in that space with you and listen to you and your fears,” she said, “then that’s what I want to be.”

I don't understand why the address is not in the article.

Good to see some place like this in Frederick.

Bravo! I wish you years of success. Your passion to help others is heartwarming.