You are the owner of this article.
Edit Article Add New Article
You have permission to edit this article.
Edit
Home
News
Opinion
Sports
Topics
Calendar
Classifieds
Special features
Contests
Become a carrier
1 of 6 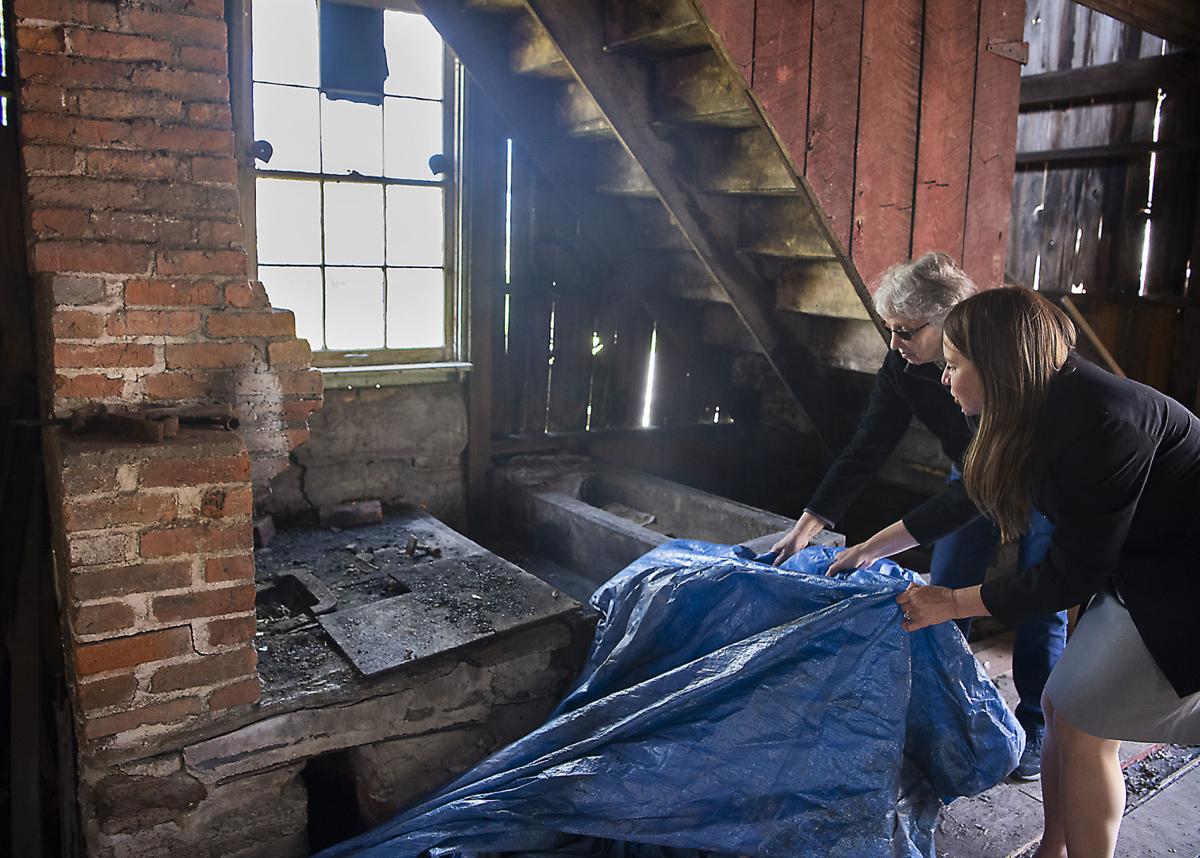 Barbara Fromer, who has owned the New Market property since 1984, left, and Jean LaPadula, Main Street coordinator and grant manager, pull a tarp off the original blacksmith’s fire box and forge in the historic building. 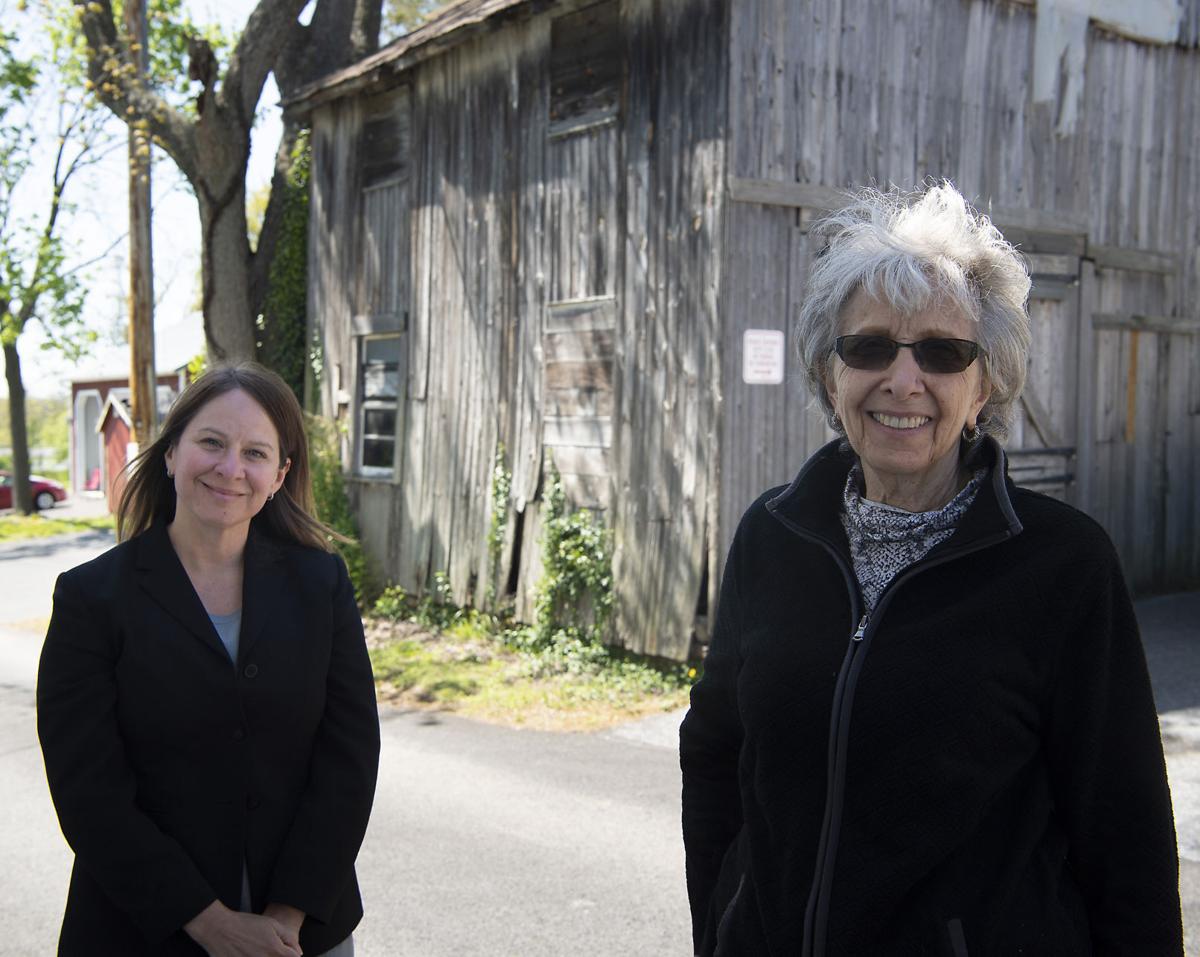 Jean LaPadula, Main Street coordinator and grant manager, left, and Barbara Fromer, who has owned the property since 1984, stand in front of the historic shed in New Market. 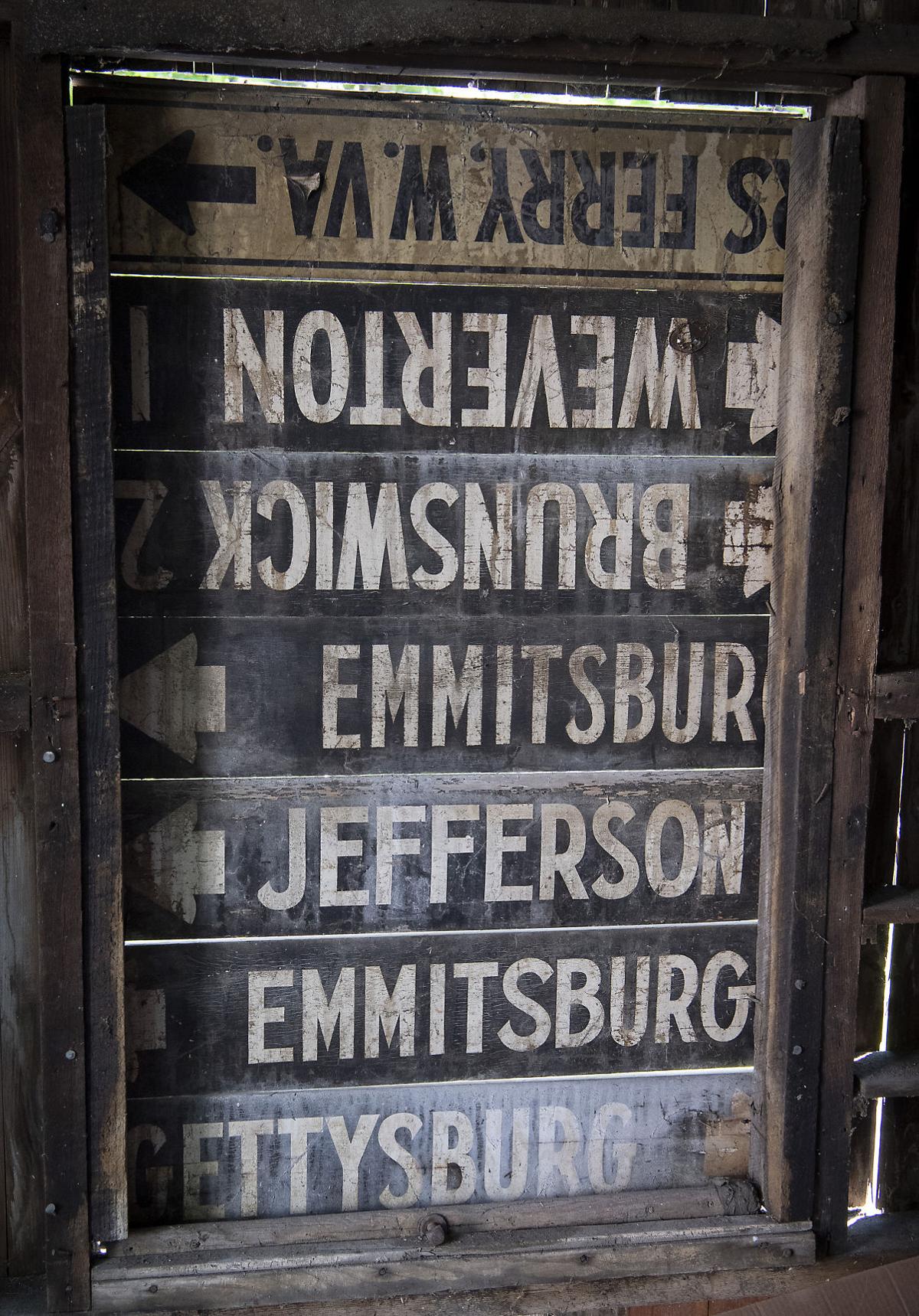 One of the windows is boarded up with a series of signs that once pointed travelers to towns such as Harpers Ferry and Gettysburg. 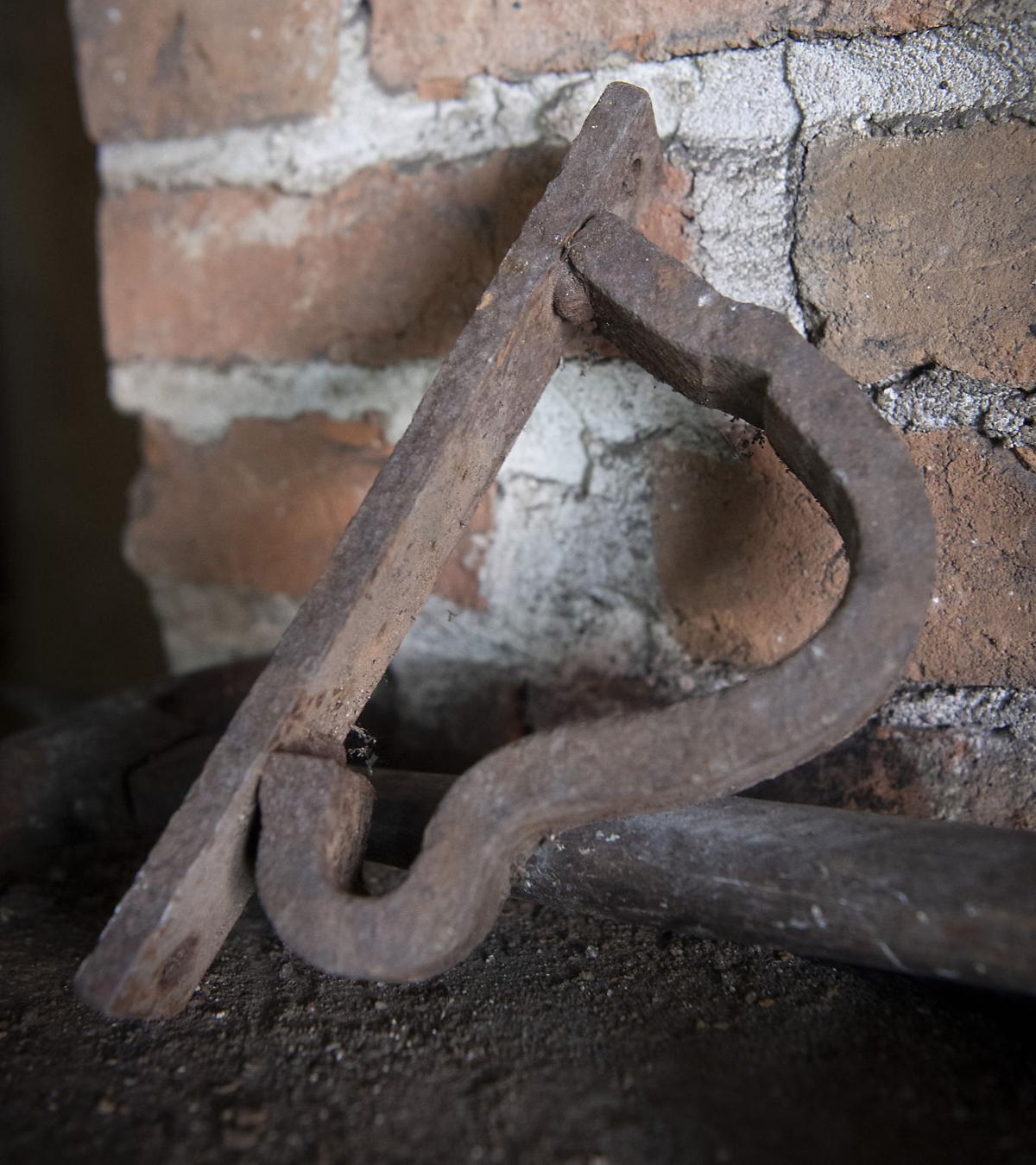 A heavy hammered-iron item that appears to be a door handle rests near the forge. 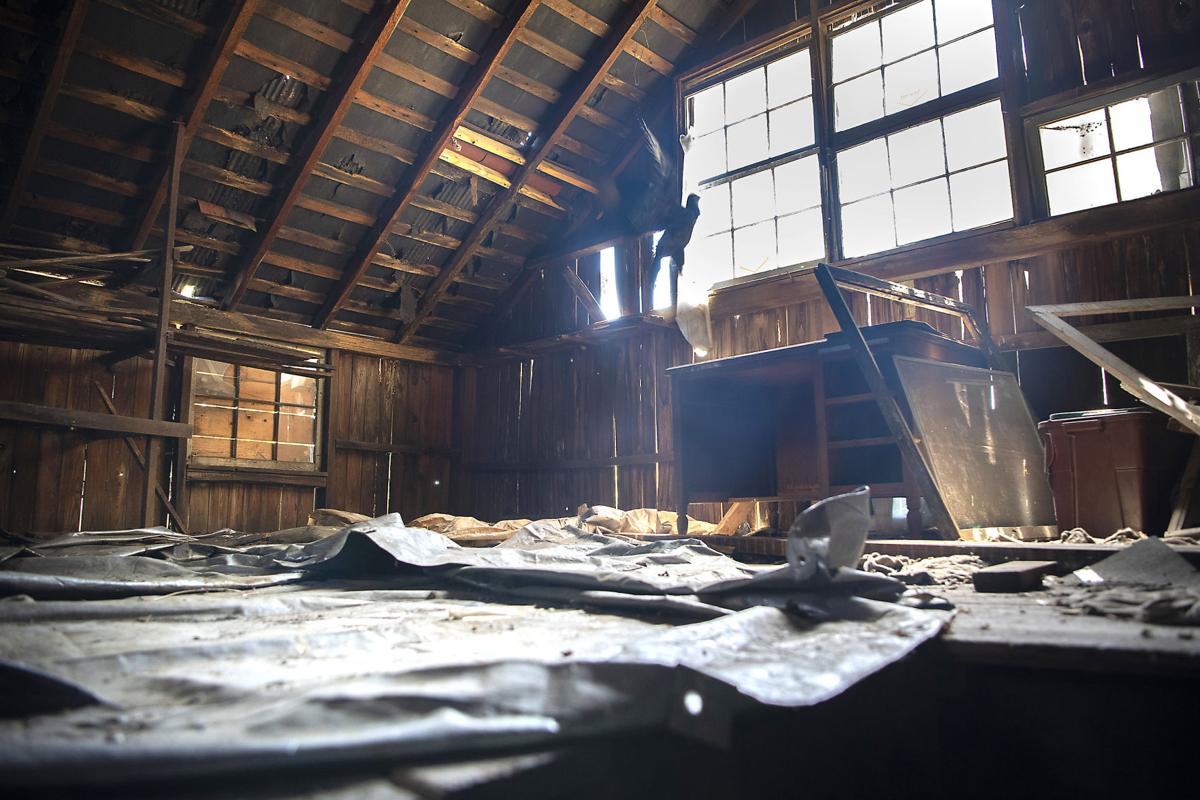 A large bird that resembles a turkey vulture flies out a broken window on the second floor of the historic building.

An 1873 map shows what New Market looked like at the time. The lot circled in black denotes where a carpenters shop stood, and represents where the former blacksmith shop is today.

A historic blacksmith shop in New Market that appeared destined for demolition may be saved and renewed as a tourist attraction after town leaders and the property’s owner dug into details of the structure’s past.

To the rear of 52 W. Main St. sits a dilapidated shed-like structure, roughly 50 feet back from the road. In a corner on the first floor there is a brick chimney and forge, covered with black soot. A tarp covers part of the ceiling. The stairs creak. One of the windows is boarded up with a series of signs that once pointed travelers to towns such as Harpers Ferry and Gettysburg. Two large birds that resemble turkey vultures have rented out the second floor.

The blacksmith shop’s exact history is a little hazy, but an 1873 town map shows a carpenter’s shop stood where the shed is today. The forge has a fire pot with a patent year of 1907, but town officials say that date may not be the true age of the forge, as the pot could have been replaced.

With some love and attention, the town hopes to make the building structurally sound, fire up the forge, install educational signs and bring in blacksmiths for demonstrations to illustrate a period of New Market’s history.

“The idea of a Main Street is that you’re bringing new life to historic towns,” said LaPadula, who’s helping lead the charge to secure funding for the building’s restoration.

Barbara Fromer, who has owned the property since 1984, says she always wanted to restore the blacksmith shop. When opportunities came along in the past to fix it up, Fromer felt they were either too costly or would not have maintained the authenticity of the building.

She’s agreed to lease the shed’s property to the town and put up $5,000 of her own money to help with restoration. The town council has committed up to $5,000 and would insure the land if they can secure 90 percent of the funding.

From her years in the antique tool business, Fromer had a sneaking suspicion there might be more to the shed than meets the eye.

“I knew this building was significant,” Fromer said. “Having been in the antique tool business, I just saw the value.”

She used to operate an antique shop in the brick building in front of the shed, which is now a yoga studio. In the early 1900s, the brick building served as a carriage house, Fromer said, which may have been supported by a blacksmith.

Around 2009, Fromer allowed a blacksmith to use the shed for a few years in exchange for maintaining the building, but for the most part, it sat idle.

In need of storage space, Fromer applied a few months ago for a demolition permit through the town so she could raze the structure and build anew.

When the demolition application came before the historic commission, Pippin says they asked to see the building in person before making a decision.

“That’s when we saw the forge, and that kind of changed the dynamic,” Pippin said.

About two weeks later, they began talking about a possible restoration. He brought the blacksmith shop to the attention of the New Market Civic Partnership, of which he is chairman, and the group agreed it would like to try to save the building.

“I thought that, well, if you demolish it, it’s gone forever. Let’s take a closer look at it and see what can be done,” he said.

LaPadula is looking into possible funding from county and state agencies or any groups with an interest in historic preservation. One estimator suggested exterior repairs alone would cost tens of thousands of dollars, LaPadula said.

When she presented a draft memorandum of understanding between the town and Fromer to the town council recently, councilmen and the mayor appeared excited about the prospect.

“I think it has some historic significance not only to the town, but to the old national pike as well,” Mayor Winslow Burhans III said in an interview.

The Town of New Market was founded in 1793 along the Baltimore Turnpike and grew with the needs of travelers passing through on their way to Baltimore and beyond, according to an account of the town’s history on its website.

The town has more questions than answers at this early stage in the planning process, but LaPadula is hopeful this “treasure” in the town can be restored.

Anyone who might have insight into grant programs or interest in supporting the restoration can contact Main Street coordinator and grant manager Jean LaPadula at jeantownofnewmarket@gmail.com or 301-865-5544.

Helping with the restoration is just the kind of project I'd volunteer for if I lived closer to New Market.

And I believe I'd phrase "New Market grew with the needs of travelers passing through on their way to Baltimore and beyond" differently. Going "to" Baltimore there's not much "beyond," since the National Pike originated there and was developed westerly. It was first financed by local entrepreneurs from baltimore to Cumberland as a means to move their goods and, when the Federal government saw what a lucrative enterprise it was becoming, they financed it from there to points west.