Skip to main content
You are the owner of this article.
Edit Article Add New Article
You have permission to edit this article.
Edit
Home
News
Opinion
Sports
Topics
Calendar
Classifieds
Special features
Contests
Become a carrier
1 of 7 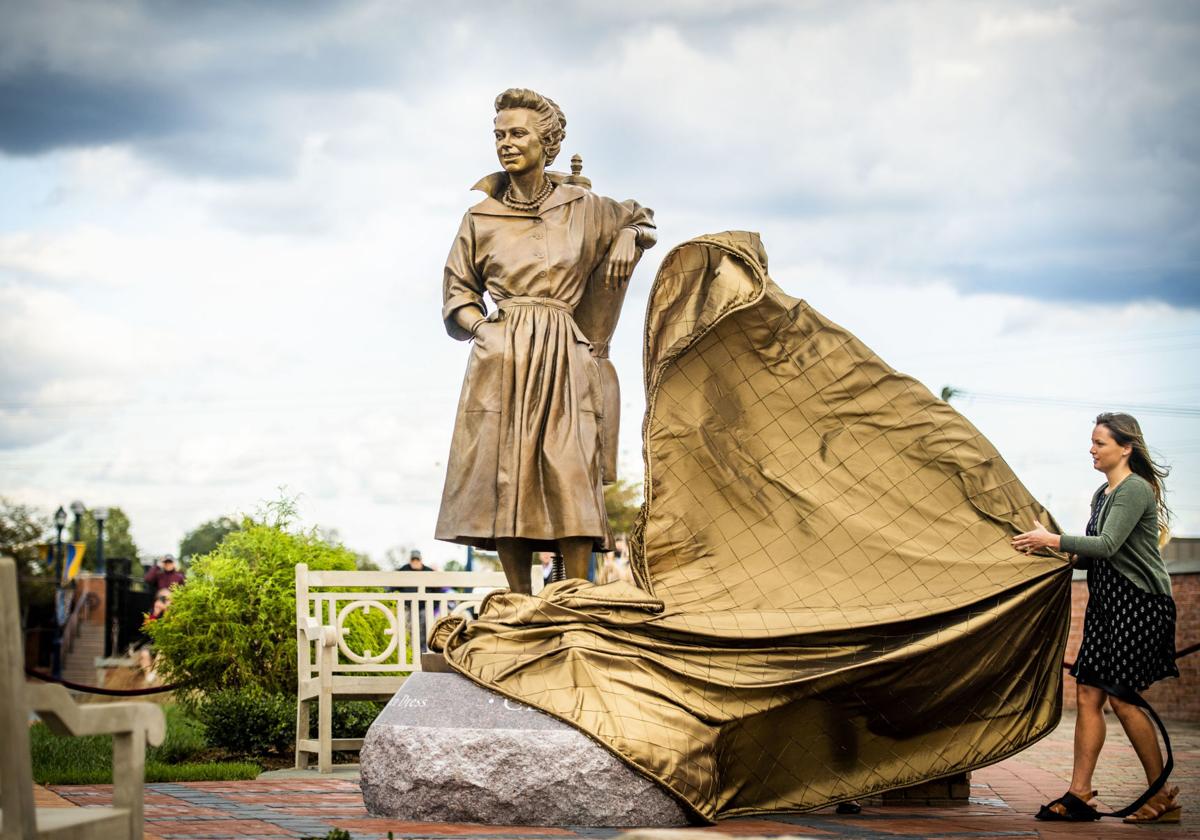 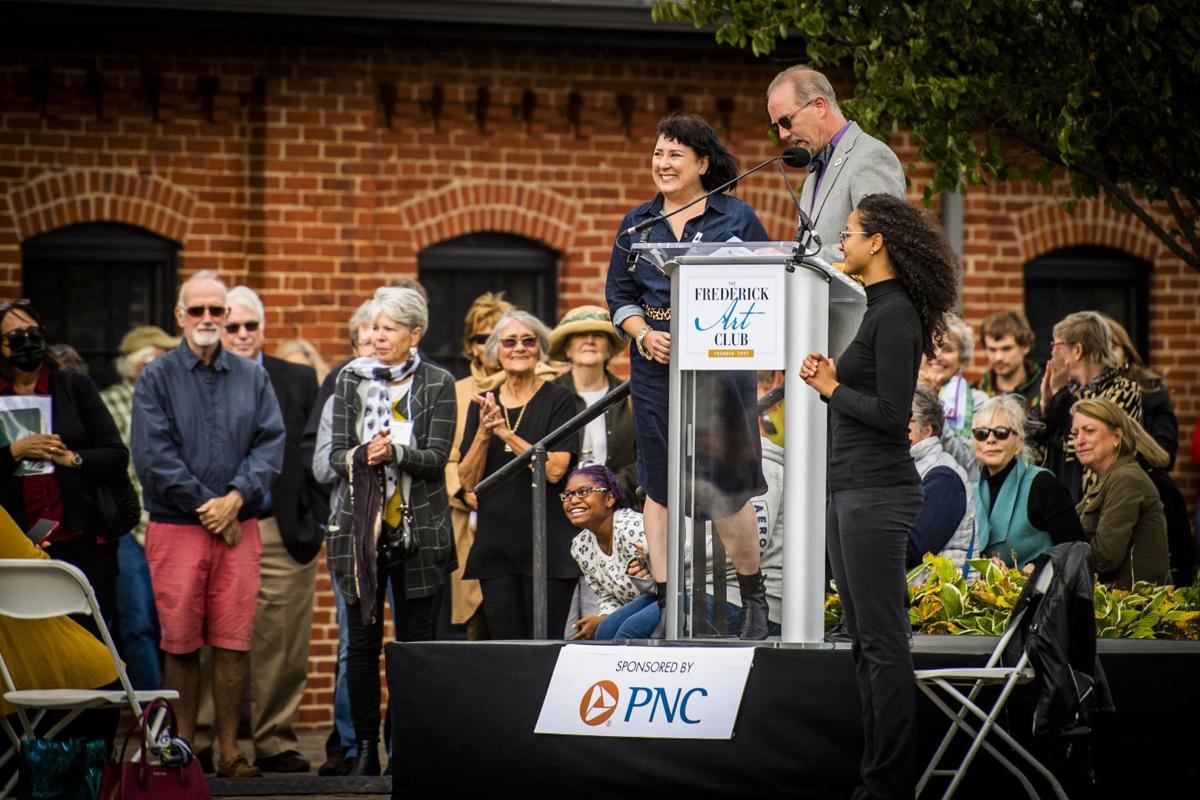 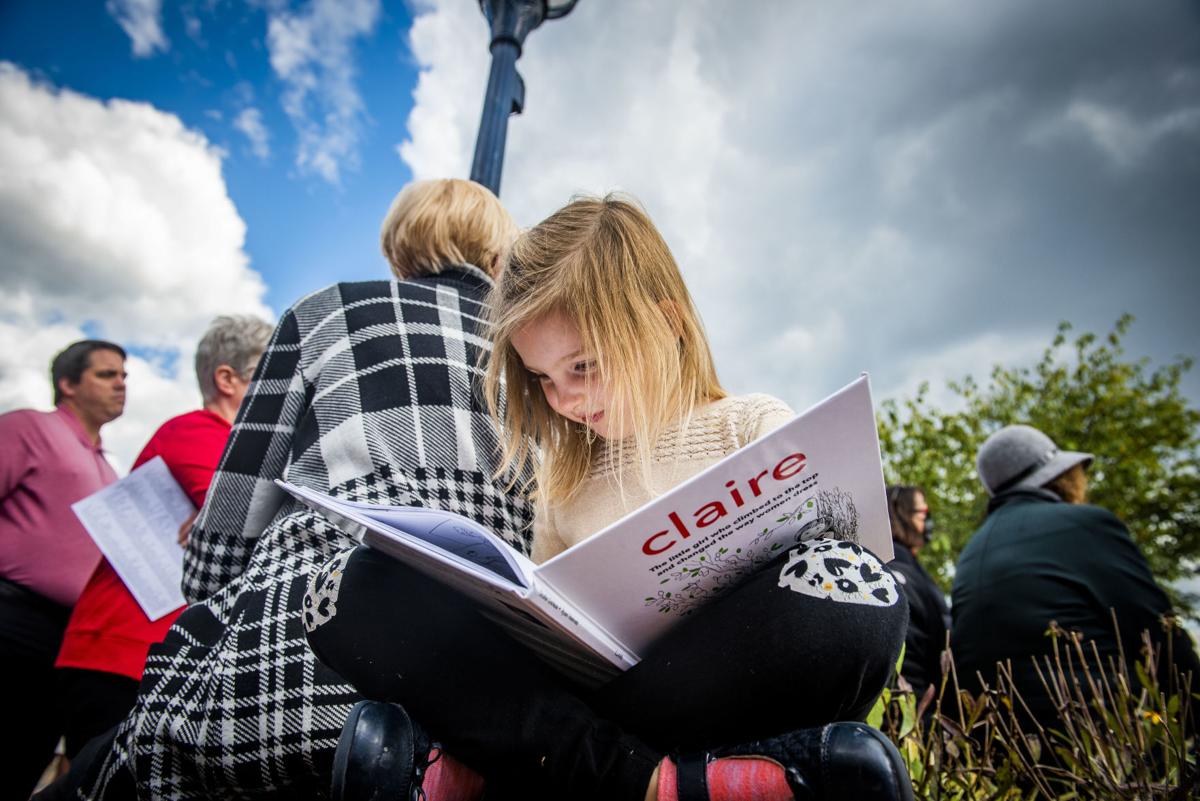 Audra Furgol, 5, reads a book called “Claire: The little girl who climbed to the top and changed the way women dress” during the public unveiling of the Claire McCardell statue at Carroll Creek Park on Sunday. The bronze statue, created by Sarah Hempel Irani, was created in honor of fashion designer and Frederick-native Claire McCardell. Furgol was excited to attend the event and loves learning about fashion. After finally seeing the statue unveiled, Furgol said, “I want to be a fashion model!” 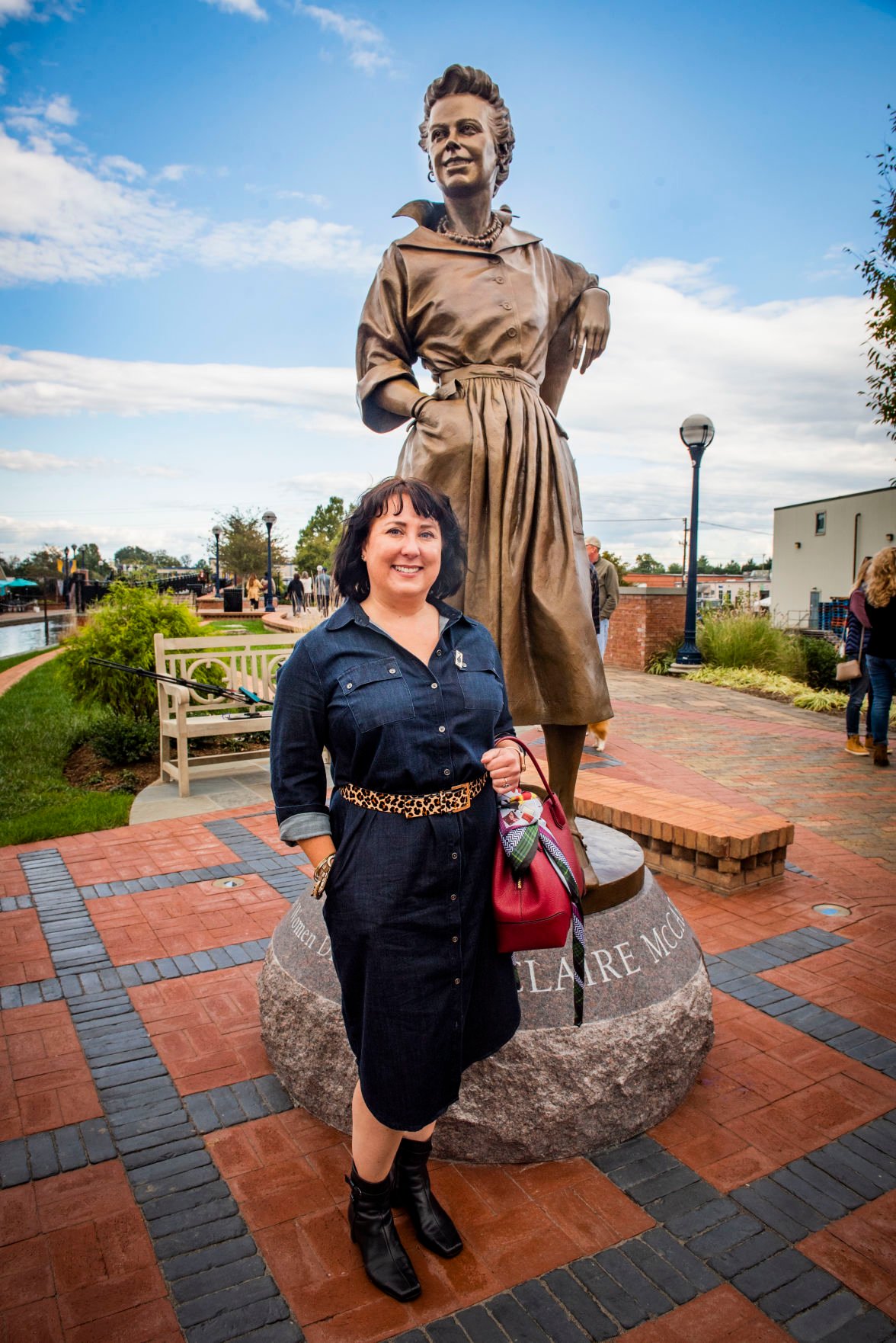 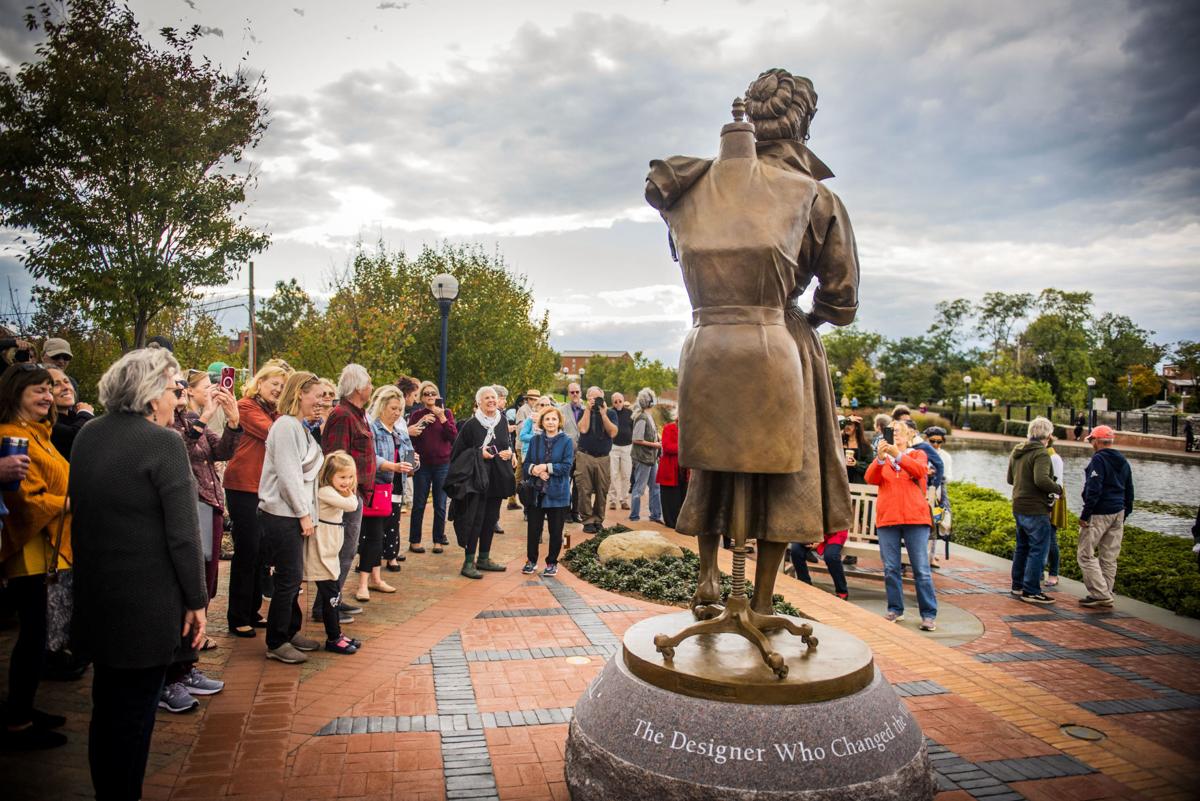 Attendees look at the Claire McCardell statue following the unveiling at Carroll Creek Park on Sunday. The bronze statue, created by Sarah Hempel Irani, was created in honor of fashion designer and Frederick-native Claire McCardell. 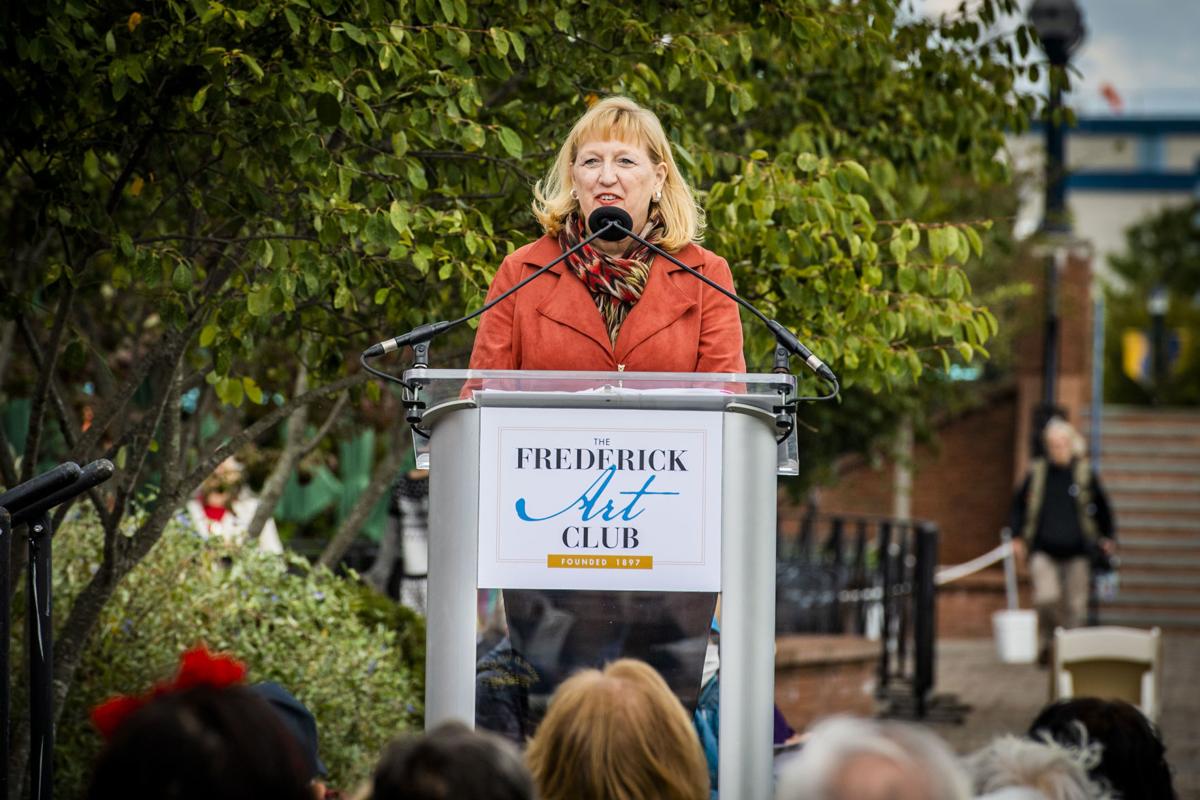 Frederick County Executive Jan Gardner speaks during the public unveiling of the Claire McCardell statue at Carroll Creek Park on Sunday. The bronze statue, created by Sarah Hempel Irani, was created in honor of fashion designer and Frederick-native Claire McCardell. 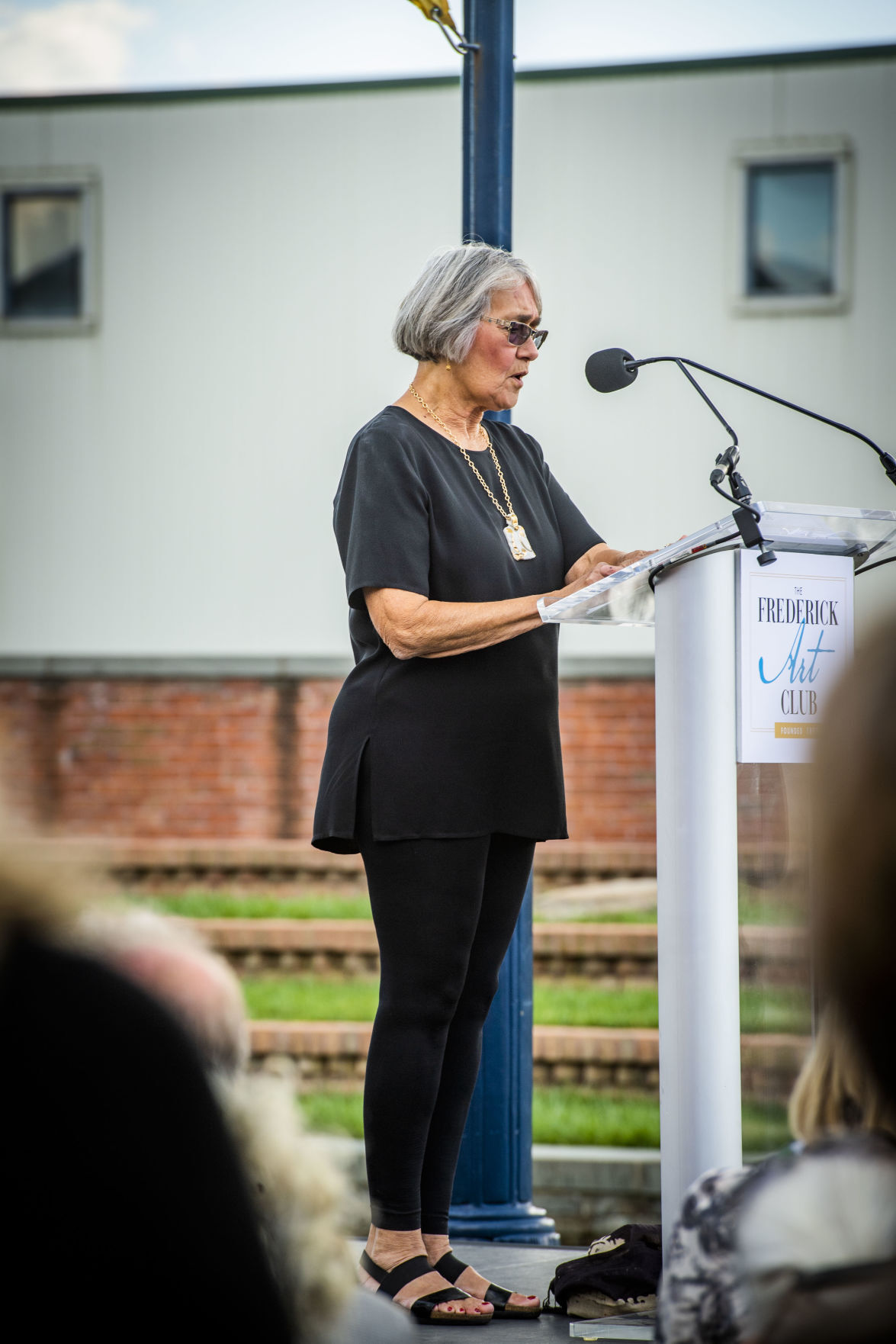 Audra Furgol, 5, reads a book called “Claire: The little girl who climbed to the top and changed the way women dress” during the public unveiling of the Claire McCardell statue at Carroll Creek Park on Sunday. The bronze statue, created by Sarah Hempel Irani, was created in honor of fashion designer and Frederick-native Claire McCardell. Furgol was excited to attend the event and loves learning about fashion. After finally seeing the statue unveiled, Furgol said, “I want to be a fashion model!”

Attendees look at the Claire McCardell statue following the unveiling at Carroll Creek Park on Sunday. The bronze statue, created by Sarah Hempel Irani, was created in honor of fashion designer and Frederick-native Claire McCardell.

Frederick County Executive Jan Gardner speaks during the public unveiling of the Claire McCardell statue at Carroll Creek Park on Sunday. The bronze statue, created by Sarah Hempel Irani, was created in honor of fashion designer and Frederick-native Claire McCardell.

Even as a chilly autumn breeze buffeted the leaves of green trees Sunday afternoon, a steady stream of people gathered on the walkway outside of Idiom Brewery.

Since there were far too many to each claim a seat at one of the white folding chairs set up by the edge of Carroll Creek, many instead perched on brick walls or remained standing, craning their necks to see the small lectern positioned at the front of the crowd.

They were there to celebrate the culmination of more than two years of hard work by Frederick sculptor Sarah Hempel Irani and a women-driven team spearheaded by the Frederick Art Club. (Not to mention a three-day, 1,680-mile car ride from a foundry in Loveland, Colorado, to downtown Frederick’s Carroll Creek Linear Park.)

“All I’ve been able to say today is wow,” said Marilyn Bagel, president of the Frederick Art Club. “I just want to point out, I do have tissues with me because it just might happen.”

When the art club approached Hempel Irani three years ago to craft a monument honoring McCardell — a pioneering designer credited for inventing American sportswear and bringing pockets, ballet flats and hoodies to women nationwide — it had yet to raise any money for the project.

Still, Hempel Irani remembered Sunday how thrilled she was by the organization’s proposal and the chance to join the effort to “break the bronze ceiling.”

There are more than 50,000 statues of historical figures in the U.S., Hempel Irani told the crowd, but less than 7 percent are of women.

“Frederick is a place where history is made, and today we are doing it again by honoring a woman who changed the way women dress,” she said.

Frederick could definitely use more statues of women in its public spaces, Frederick County Jan Gardner said in her remarks on Sunday. McCardell’s monument, she noted, is the first one.

“It’s about time we put a woman on a pedestal,” she proclaimed, making the audience erupt in claps and cheers.

Born just north of Carroll Creek in Frederick’s Rockwell Terrace neighborhood in 1905, McCardell grew up climbing trees, playing sports and deconstructing the far less restrictive clothing her brother’s wore to create more comfortable garments for herself. She spent two years studying home economics at Hood College before her father relented and allowed her to attend what would later become the Parsons School of Design in New York City.

It didn’t take long for her to make her mark on the fashion industry. Known for her focus on comfort and style, McCardell designed clothes with alternative materials such as denim, calico and wool jersey during fabric shortages created by World War II and moved zippers from the back to the sides of garments to make it easier for women to dress themselves.

According to a sign that now stands by her monument along Carroll Creek, McCardell was one of few women in the industry to have her name on a label by the time of her death in 1958 due to colon cancer. She is now buried in her family plot at Mount Olivet Cemetery in Frederick.

A big fan of “Project Runway,” Frederick Mayor Michael O’Connor remembers seeing an episode where a contestant credited McCardell as their inspiration for that competition.

“It’s a source of pride to know that while that contestant perhaps didn’t know that Claire McCardell was from Frederick, I did,” he said, drawing laughs from the crowd. “I knew they were talking about Frederick, and that meant a lot.”

To sculpt the fashion designer, Hempel Irani used a photo she found in the Hood College archives as a reference. At 7.5 feet tall and 860 pounds, McCardell’s bronze likeness poses in an outfit featuring ballet flats, a buttoned top, a skirt with side-snaps and — of course — pockets. Her eyes crinkle in a grin as she leans against the torso of a mannequin.

On Sunday, Hempel Irani — also wearing a dress with pockets — said she felt like she had to get to know McCardell’s personality to be able to capture her in sculpture. The fashion designer was introverted, independent, confident — but never haughty — and committed to the work she was called to do, Hempel Irani told the audience. She was a “true role model” to her and to so many other young women.

“And what’s more,” Hempel Irani continued, her voice cracking with emotion, “I’ve gotten to know a group of women who have demonstrated the power of what collaboration and commitment can do . . . They believed in me, I believed in them, and we all believed in this community. And we did it! We did it together.”

The sculptor then invited the gathered crowd to walk across the creek to meet McCardell. They did just that, the wind rustling their hair as they examined the statue and snapped photos with their cell phones. On the roughly hewn stone at the woman’s feet read an inscription: “The Designer Who Changed the Way Women Dress.”

During the celebration, Gardner told the crowd that she often says women get things done. McCardell exemplifies this, she said, but so do the women who made her monument possible — from Hempel Irani to Sharon Poole, who created the garden that is the statue’s home, and Irene Kirilloff, who made the site’s signage.

“This statue will be part of your legacy as much as part of Claire’s,” she said.

Correction: An earlier version of a photo cutline misidentified the person unveiling the Claire McCardell statue. The woman in the first photo is Jessica Fitzgerald. Fitzgerald is a two-time winner of the Frederick Art Club’s scholarship and a senior at Hood College currently student teaching.

Imagine a statue in Frederick of someone who isn’t a man and who is someone who brought grace and beauty into the world instead of death. That’s a reason to celebrate.

Amazing work of art, one of the finest bronzes I’ve ever seen.

I had never heard of Claire McCardell before moving to Frederick, which is a shame.

I am eternally grateful for her contributions to fashion, especially for pockets in women’s clothing.

Very cool and how great to read about someone who isn't a politician or military figure. Maybe one day McCardell will get her face painted on the side of McCutcheon's.

She was the daughter of Adrian McCardell who was Maryland state senator, and president of the Frederick County National Bank.