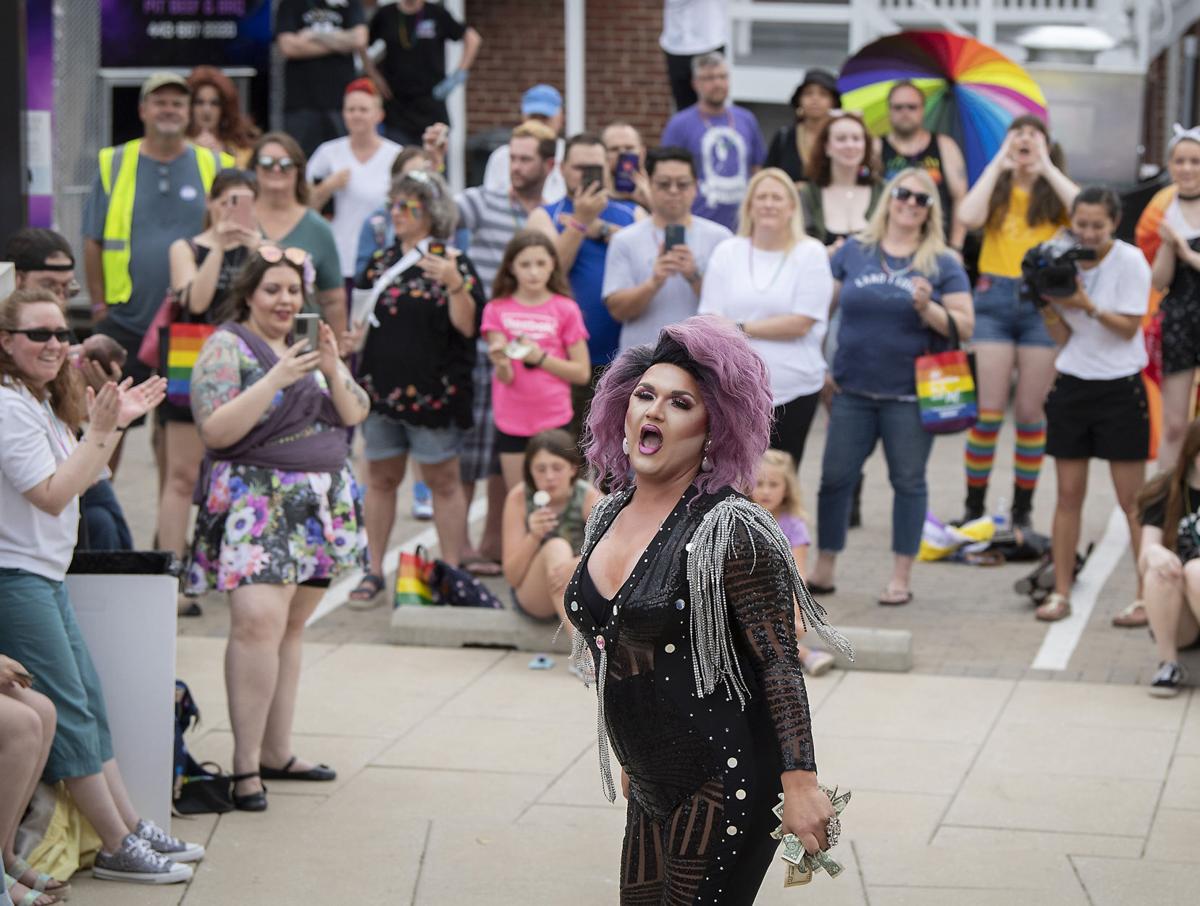 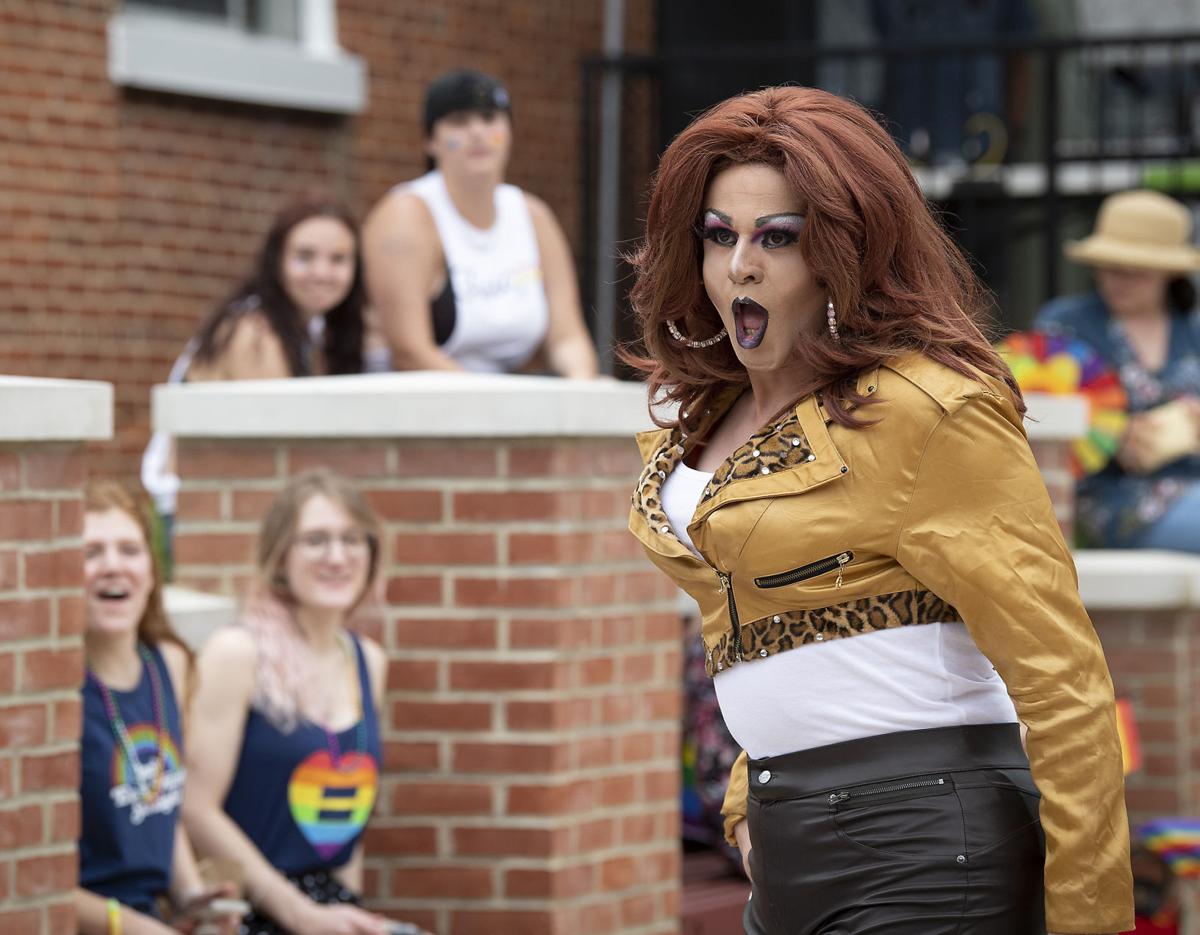 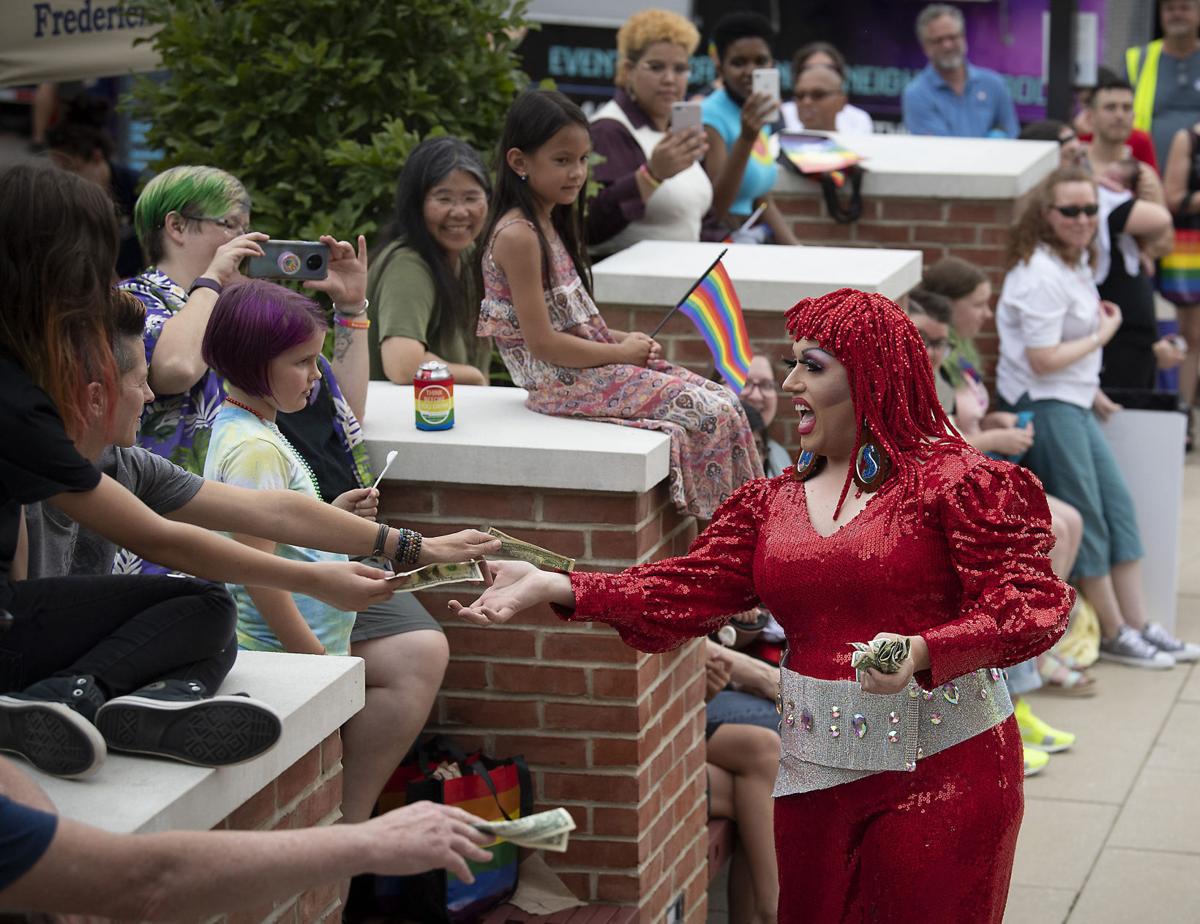 While the official Frederick Pride Parade isn’t until October due to the pandemic, members of the LBGTQ+ community came together and celebrated their pride on a smaller scale Saturday during “Kings, Queens and Vaccines” festivities.

The courtyard behind the Evangelical United Reformed Church of Christ served as the backdrop for dozens of smiling faces and colorful garb at the Frederick Center-organized event. Behind the Frederick church, people waved little rainbow flags and used rainbow fans to keep cool. There were vendors selling food, rainbow beads and giving people rainbow henna.

The nonprofit Frederick Center serves as an LGBTQ+ advocacy organization.

Kris Fair, the program coordinator, said his group obtained Johnson & Johnson vaccines for the event, which means people who got the shot Saturday won’t have to worry about a second dose. The vaccines were being administered by LGBTQ+ nurses in an effort to break down the distrust in the medical field, the organizer said.

Clare Madrigal, a member of the Board of the Directors at the Frederick Center and nurse at Frederick Health, was among those administering the vaccine.

“I’m here today because my two favorite things are coming together: health care and [the] LGBTQ community,” she said.

With rainbow hair and eye makeup, Madrigal was happy to report that they vaccinated 16 people at the event.

Emma Mauer, Jenny Bell and Emily Bell came to the Pride event from Mercersburg, Pennsylvania. The trio was decked out: Mauer with a lesbian pride flag wrapped around her shoulders, Jenny Bell sporting the non-binary flag over her arm and Emily Bell flashing her knee-high rainbow socks and pigtails with rainbow scrunchies. All three had gems on their faces in a variety of colors.

With few Pride events in Mercersburg, the three friends said this was the closest — and safest — LGBTQ+ celebration for them. They considered going somewhere in Pittsburgh or New York, but they didn’t feel comfortable with the crowds there.

“It’s nice to be in a place where people agree that they should be safe in all kinds of cascades — like be safe in your sexuality and gender identity and also be safe in terms of, ‘Don’t get this deadly virus,’” Emily Bell said.

The three were looking forward to the drag show at the event. Four drag queens — Shaunda Leer, Madison St. Lawrence, Araya Sparxx and Ivanna Rights — added their energy to the festivities.

Shaunda Leer opened the show in a pink satin leotard and knee-high laced boots, doing the splits and rallying the crowd to “I Wanna Dance with Somebody” by Whitney Houston.

Sparxx has helped with Pride events in Frederick in the past, and she was happy to be a part of a celebration that promoted both unity among LGBTQ+ people and the broader population and COVID-19 vaccinations.

“It was a beautiful day, beautiful faces out and about. It was just great to see everybody come together once again as a community to support one another, and not just the pride of it, but the community itself as Frederick,” Sparxx said.

To everyone who salutes the rainbow flag---

be certain not to skip any CV19 jabs!

That's right. Society did make a wrong turn, decades ago. Luckily, places like the Evangelical United Reformed Church of Christ are allowing society to become the way that the citizens want it to be.

Chief Brody was right. "Your gonna need a bigger net."

What exactly does that mean? A bigger net for what?

Kudos to the believers at the Evangelical United Reformed Church of Christ.

They must read a different Bible than I do.

Yep, they read the Christian Bible. You know, the one that says God loves EVERYONE, and you should do the same. I don't know which bible you were reading.

bnick, sure, love every *person*, but HATE EVIL behavior.

“The fear of the Lord is to hate evil; Pride and arrogance and the evil way. And the perverted mouth, I hate.

Hate evil, you who love the Lord

Let love be without hypocrisy. Abhor what is evil; cling to what is good.

Furthermore, you shall select out of all the people able men who fear God, men of truth, those who hate dishonest gain; and you shall place these over them as leaders of thousands, of hundreds, of fifties and of tens.

He who profits illicitly troubles his own house, But he who hates bribes will live.

“You have loved righteousness and hated lawlessness; Therefore God, Your God, has anointed You

I hate the assembly of evildoers, And I will not sit with the wicked.

Do I not hate those who hate You, O Lord? And do I not loathe those who rise up against You?

Brick - read Romans 1:18-32. And artandarchitecture, thank you for your response.

art, What was the evil behavior to which you refer? Encouraging Covid vaccination?

ptomd, Romans is Paul’s letter to Christians in Rome, a church that was not founded by him or under his influence. His letter to them is the equivalent of Protestants telling Catholics (or vice versa — doesn’t matter) that they are doing Christianity wrong.

Why do you think the Christians in Rome were wrong and Paul was right?

patomd, In the bibles I’ve read, Jesus had no problem hanging out with sinners. Which bible do you read?

Yes, Jesus did hang out with sinners, but he did not condone sin. We are all sinners, but by God's grace we all have the chance for salvation. In certain situations every day I ask myself - What would Jesus do? Today I'm praying for you. God bless.