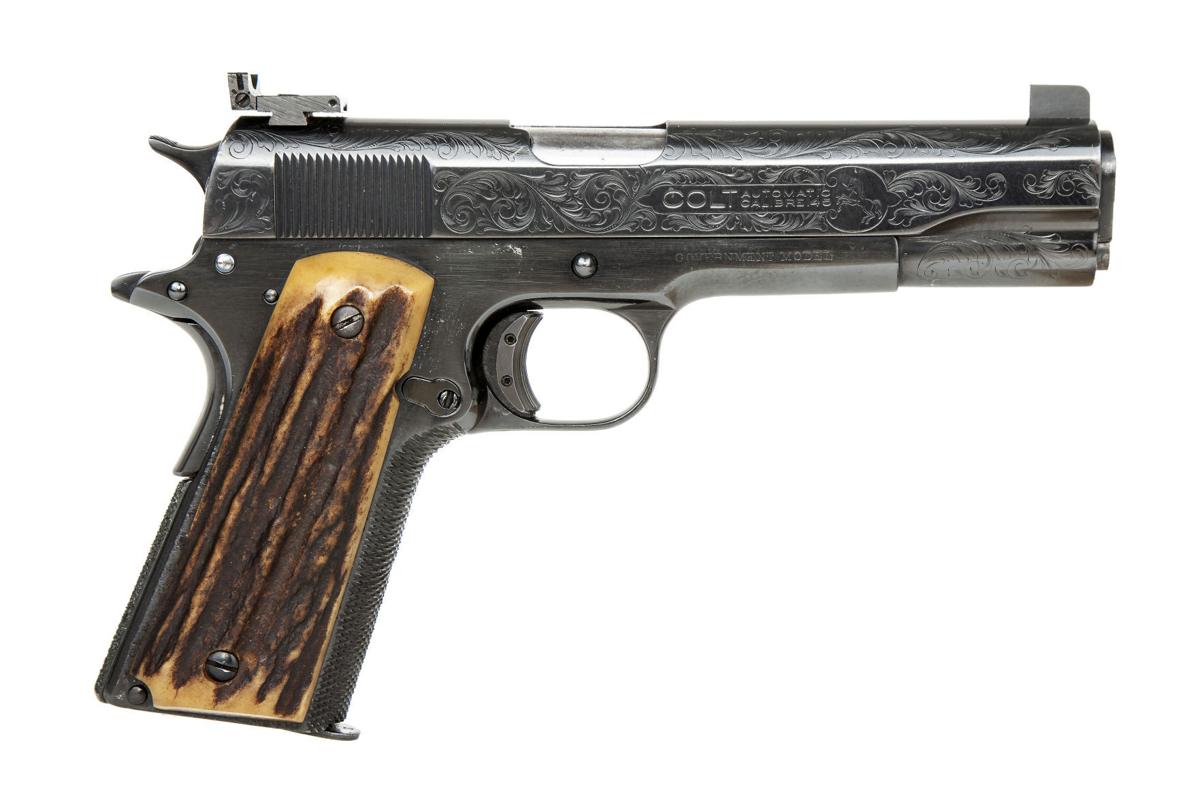 The estate of Al Capone is putting up for auction a Colt .45-caliber pistol he reportedly called “sweetheart.” It has an estimated value of $150,000. 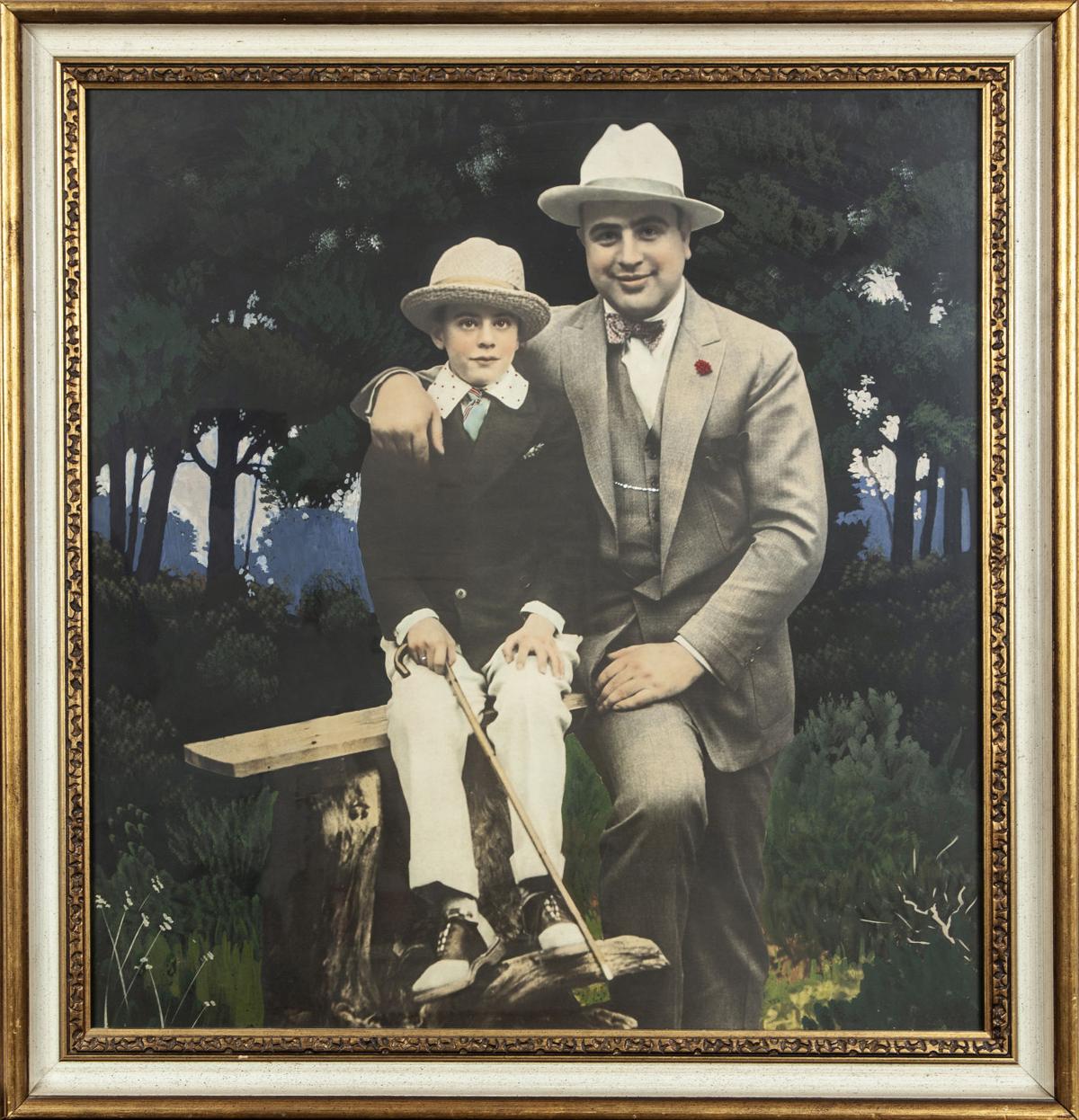 A hand-painted print of a photo of Al Capone and his son, Sonny Capone, from an undated photo, is up for auction with the rest of Capone’s estate. (Witherell’s/Chicago Tribune/TNS) 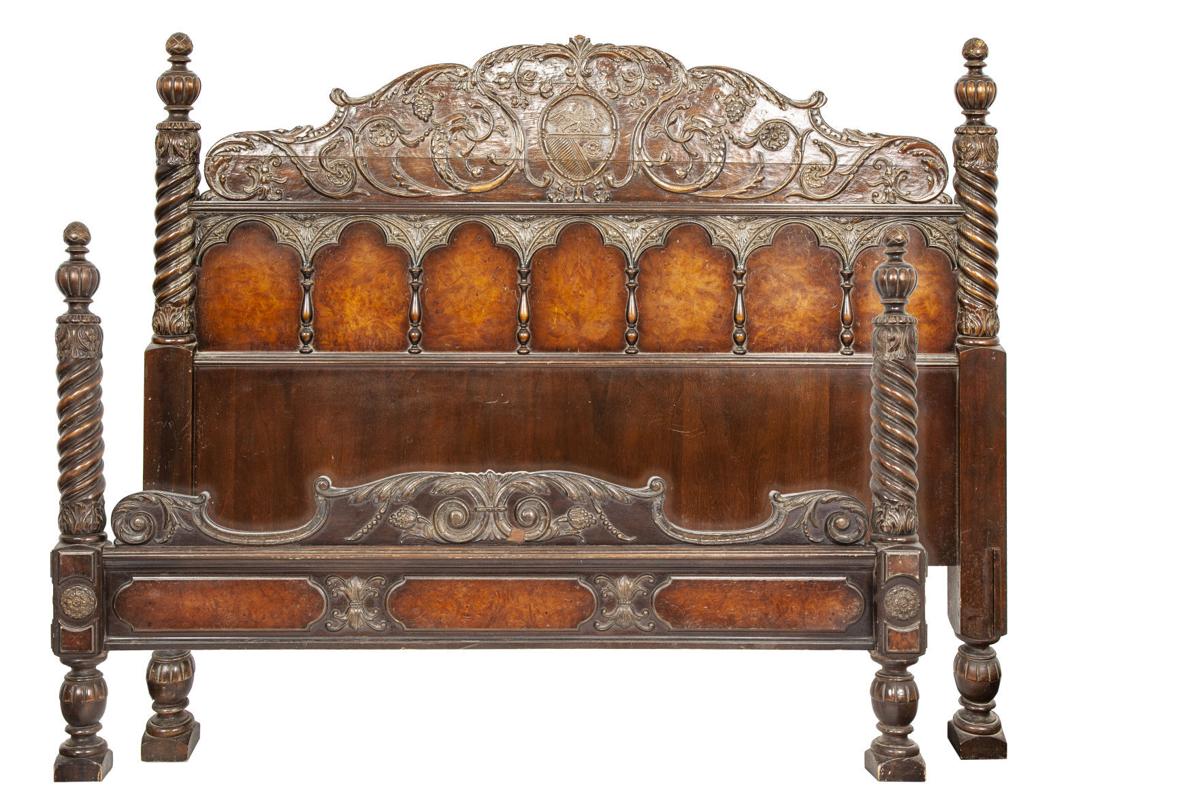 Al and Mae Capone’s bed from their home in Florida is up for auction with Witherell’s in California. Capone’s grandchildren are selling items from his Florida estate. (Witherell’s/Chicago Tribune/TNS) 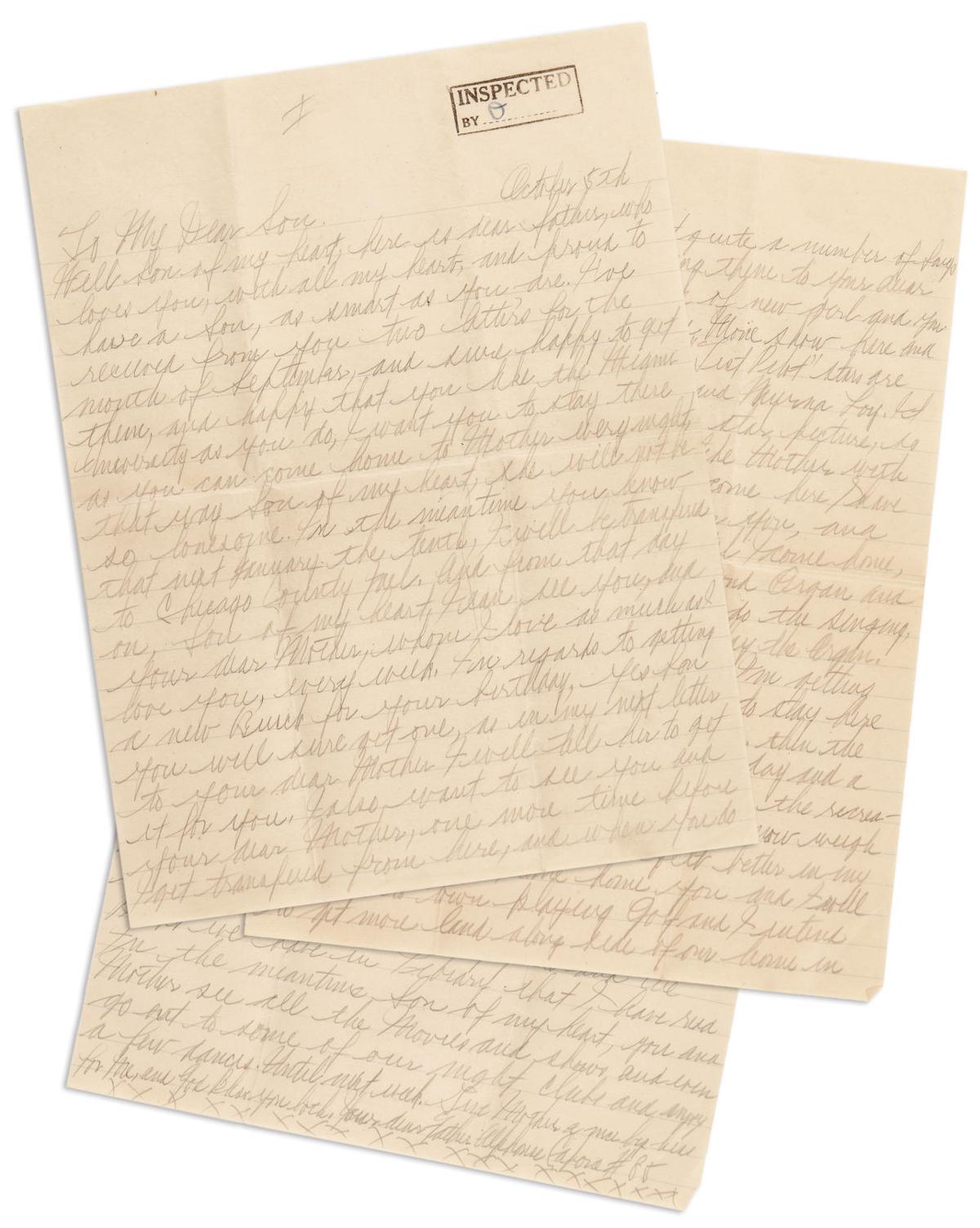 A personal letter to Sonny Capone from his father, Al Capone, when the elder was in Alcatraz for tax evasion. 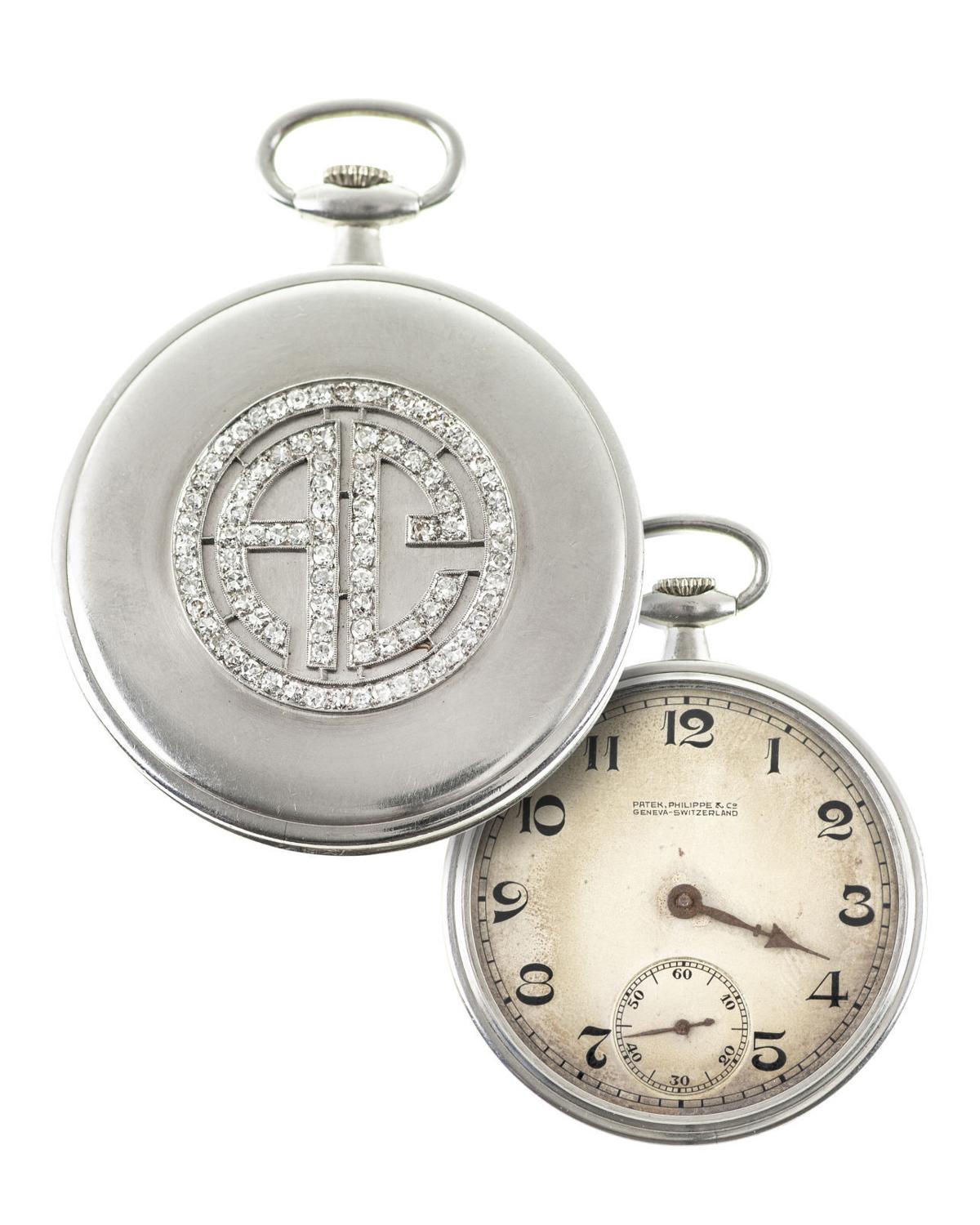 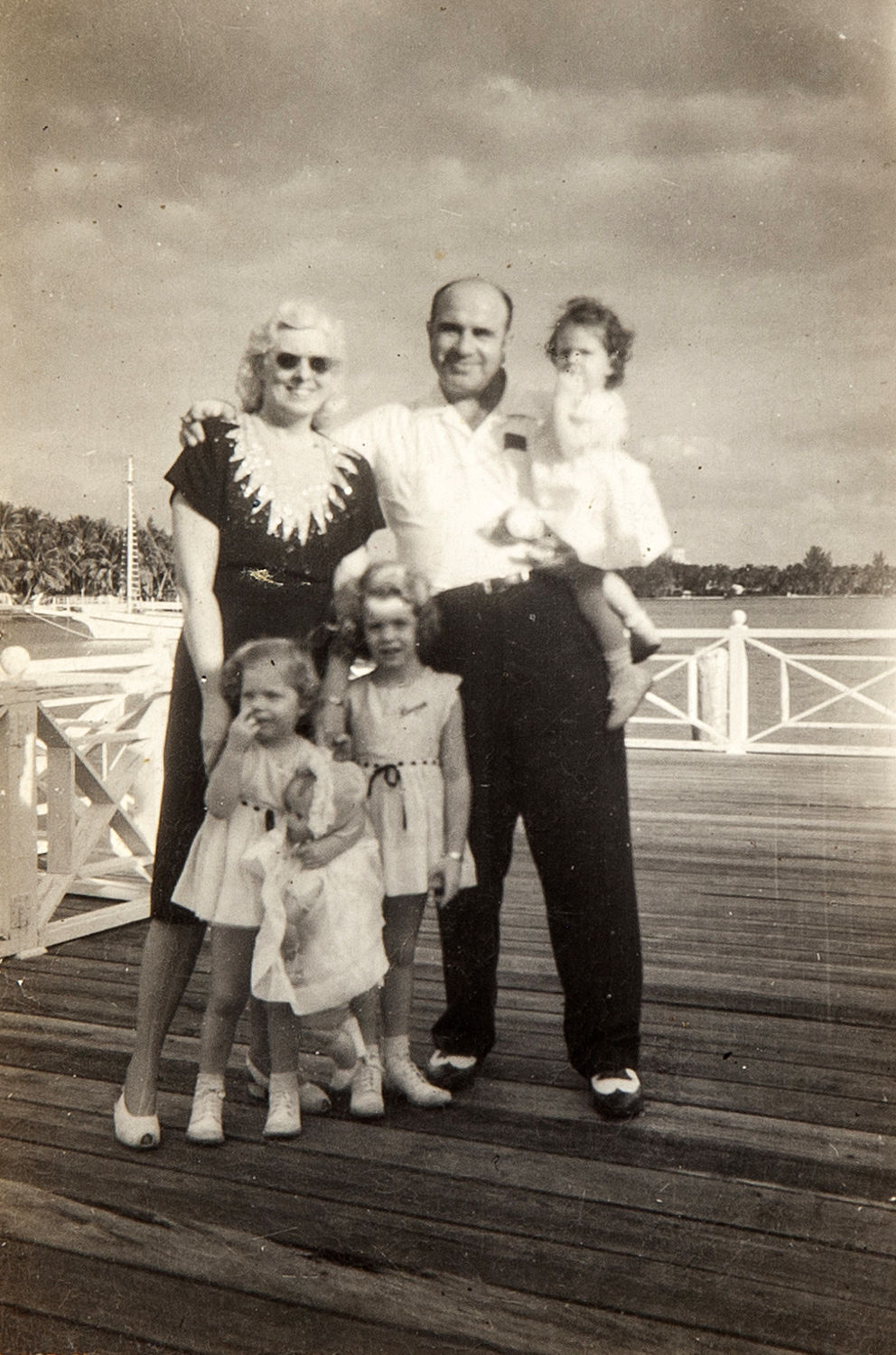 According to the estate of Al Capone, this is the last photo taken of Capone, and it will be up for auction when items from Capone’s estate go on sale in October. 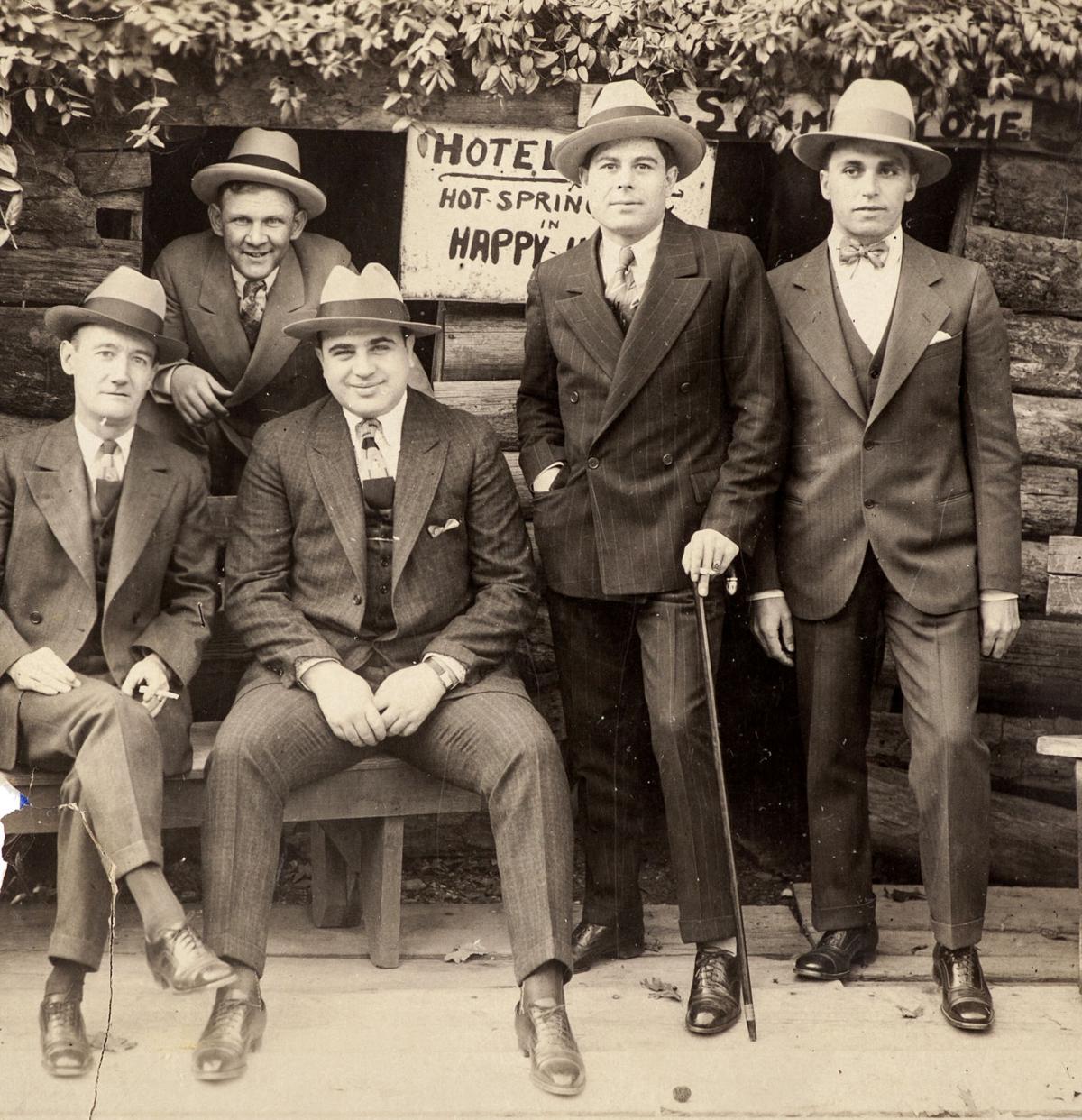 A vintage silver print photo shows Al Capone with associates at Hot Springs, Ark., in an undated photo. Many item’s from Capone’s estate will be sold at an auction scheduled for Oct. 8 in Sacramento, Calif. 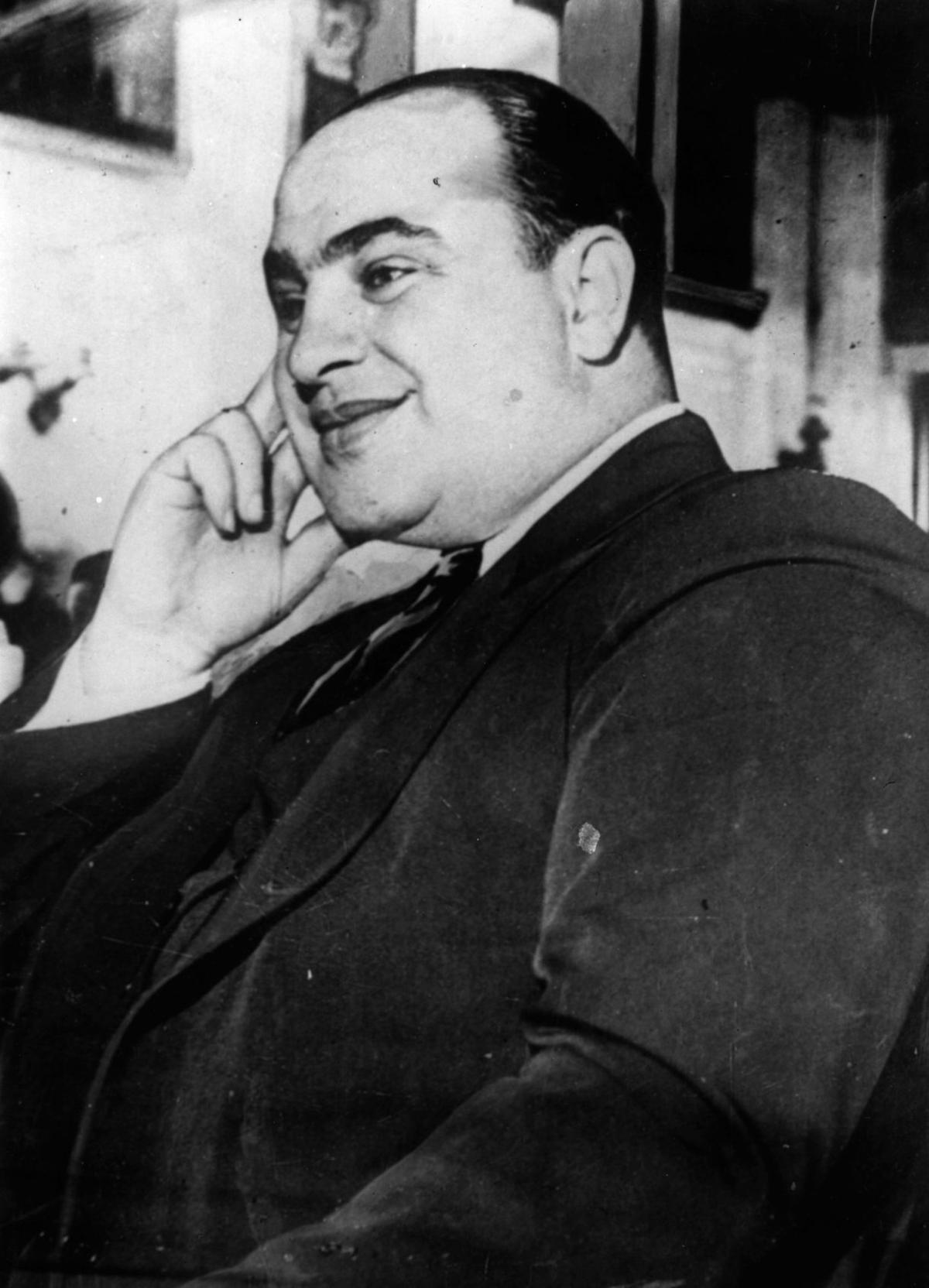 The estate of Al Capone is putting up for auction a Colt .45-caliber pistol he reportedly called “sweetheart.” It has an estimated value of $150,000.

A hand-painted print of a photo of Al Capone and his son, Sonny Capone, from an undated photo, is up for auction with the rest of Capone’s estate. (Witherell’s/Chicago Tribune/TNS)

Al and Mae Capone’s bed from their home in Florida is up for auction with Witherell’s in California. Capone’s grandchildren are selling items from his Florida estate. (Witherell’s/Chicago Tribune/TNS)

A personal letter to Sonny Capone from his father, Al Capone, when the elder was in Alcatraz for tax evasion.

According to the estate of Al Capone, this is the last photo taken of Capone, and it will be up for auction when items from Capone’s estate go on sale in October.

A vintage silver print photo shows Al Capone with associates at Hot Springs, Ark., in an undated photo. Many item’s from Capone’s estate will be sold at an auction scheduled for Oct. 8 in Sacramento, Calif.

Al Capone’s vaults inside a decrepit Chicago hotel were embarrassingly empty in 1986.

The real riches of the legendary boss of Chicago’s organized crime syndicate have been located more than 2,000 miles west in northern California, quietly occupying the homes of his four granddaughters: Veronica, Diane, Barbara and Theresa.

“The items were purchased by my grandparents, probably most of them in the late ’20s after they bought the house on Palm Island. My grandfather just said to my grandmother, ‘You go do whatever you want to do.’ And she furnished it the way she wanted to furnish it,” said Diane Patricia Capone of the South Florida home. “She purchased art objects and obviously lots of different kinds of furniture and china and crystal and flatware and all the kinds of things that you need to furnish a house — especially a large house where they entertained a good bit.”

Now, almost 75 years after the death of their grandfather, the three surviving sisters are parting with these pieces in a highly anticipated auction taking place Oct. 8, in Sacramento, California, but they are already accepting bids online at witherells.com.

Starting bids range from $100 to $50,000. Each lot will be accompanied by a certificate explaining its provenance.

“We went to the lengths of getting a calligraphist to hand write the titles on our stationery and have it signed by one of the Capone heirs,” said Brian Witherell, consignment director and chief operations officer of Witherell’s, the 52-year-old family-owned firm conducting the auction. “So with each piece, people can buy with confidence that their item is insured to the best of our ability against any type of fraud or impostors in the future.”

Experts say this sale of Capone items is unprecedented — bigger than a 1992 auction, which included the original Palm Island estate deed signed by Mae Capone.

“There has never been an auction of true-crime-related items to equal this one, and I think there will never be such a one again,” said John J. Binder, author of “Al Capone’s Beer Wars: A Complete History of Organized Crime in Chicago During Prohibition” and “The Chicago Outfit.” “I think what will happen is these 174 lots are likely to go off to the four winds to various collectors and places. It’s not like in 10 years whoever bought the stuff will put it up for auction again. No, it’s all gonna get almost surely off to different places. So, this is the mother of all true-crime auctions.”

Collectors, museums, universities and true-crime aficionados might gravitate toward some of the lots that are most closely associated with Capone — and fetch the highest estimated valuations.

Was this firearm ever used by Capone?

“I really don’t have any way of knowing,” said Witherell, who has appeared as a guest appraiser on PBS’ “Antiques Roadshow.”

And though some might be concerned about the sale of a gun that belonged to a known gangster, Witherell says, “I can tell you that all federal firearms licensing requirements are being followed and adhered to with the sale of these weapons.”

Though there are 16 firearms in the auction, only two belonged to Capone. The rest belonged to Capone’s son, Albert Francis (nicknamed “Sonny”), which are also among the lots. And if you’re a knife collector, then many belonging to Sonny are also up for sale.

“That’s one of the interesting things to me: Sonny really had a lot of guns and knives. I don’t know what that’s all about,” said Jonathan Eig, author of “Get Capone: The Secret Plot That Captured America’s Most Wanted Gangster,” released in 2011. “He was not, as far as we know, involved in any criminal enterprises, but maybe he was just a collector.”

“This individual, he’s somewhat of a mystery in part because he had such a huge public persona,” John Russick, senior vice president of the Chicago History Museum, said about Capone. “It’s hard to know just exactly what made him tick. I think the letter he wrote to his son would help maybe reveal something about him.”

The watch is not working and is missing its minute hand, according to Witherell’s. A similar pocket watch made by the Illinois Watch Co. and owned by Capone sold for $84,375 at an auction in 2017.

There’s a lot of “bling” in the auction, including diamond-encrusted money clips, tie bars, stickpins, cuff links and a pocketknife.

“People have always speculated whether Capone stashed a lot of money away somewhere,” Eig said. “I think this auction helps us see that he never stashed it away because he never saved any. He spent it as fast as he made it. That’s what the (Internal Revenue Service) concluded as well. He was a shopaholic who loved the fancy stuff — in fact the guys in his outfit had to keep him away from the vault because he would just take it and spend it so fast. All of Capone’s bling really reminds us of just how much money he was blowing entering Prohibition and how rich the bootleggers were able to get.”

Those with lighter pocketbooks might be willing to shell out an estimated couple of hundred dollars to buy figurines owned by Capone’s wife, Mae. For under an estimated $5,000, someone can own the bed Capone slept in.

“I think some of the decorative items will be affordable. I think they will. Who knows. We could have the perfect storm,” Witherell said. “These are ordinary items that if I went to an estate, we wouldn’t even take, probably, 75 of these lots. They wouldn’t be worth enough to sell. But, when you realize that Al Capone slept in that bed, it changes it by multiples.”

One of the prized items on display at the Chicago History Museum is Abraham Lincoln’s deathbed. Would the museum be willing to add another bed to its collection?

“I think for the museum, what we find the most interesting in collections like this are the materials that might actually have historical or research value, meaning you look at this material and actually glean something from it. It has information in it, point of access, that it actually opens up a window into the past and tells you something about the past, about this person, about these events,” Russick said. “For a history museum, we find often that having that be the critically important criteria to use, it often then leads to the most appealing artifacts. It isn’t just eye candy, it’s actually a powerful visual, but it’s linked to an amazing story. I think that’s where the real action is for the (Chicago) History Museum. We’re looking for those places where an object, an artifact, really reveals something for us in the present.”

Historians might be most captivated by the photos of Capone with his family and associates. Or, a 16 mm movie reel containing footage of Charles “Lucky” Luciano and other suspected crime figures from New York and Chicago.

“The bulk of those photos really show the personal side of Al Capone, and there’s not a lot of that out there — in the sense of I don’t think there’s a photo of Al Capone and his wife in the hands of any archive out there,” Binder said. ”Honestly, there are two sides to him. There’s virtually two sides to everyone out there. As I’ve said a number of times, I mean, even (Communist leader Joseph) Stalin had a wife and kids.”

Binder, along with several business partners, owns more than 3,000 historic photos — most depicting people and places involved in Chicago’s organized crime scene. Yet, he doesn’t think he will bid on these photo lots.

“As fascinating as the personal photos are, they’re not really up my alley, and the ... photos of Al Capone with some of his guys are more up my alley,” Binder said. “I think the basic problem is I expect the photos will sell for a lot more than what I’m willing to pay, so I don’t think I am going to be bidding. I think it’s going to be out of my range. There are limits to what I am willing to pay.”