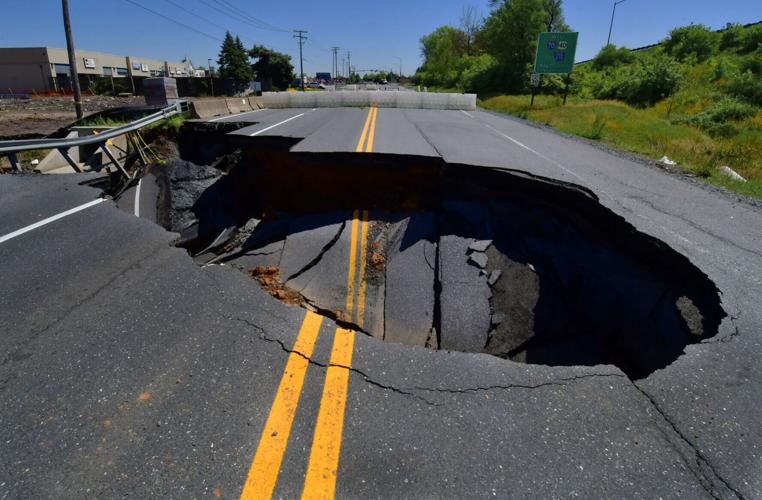 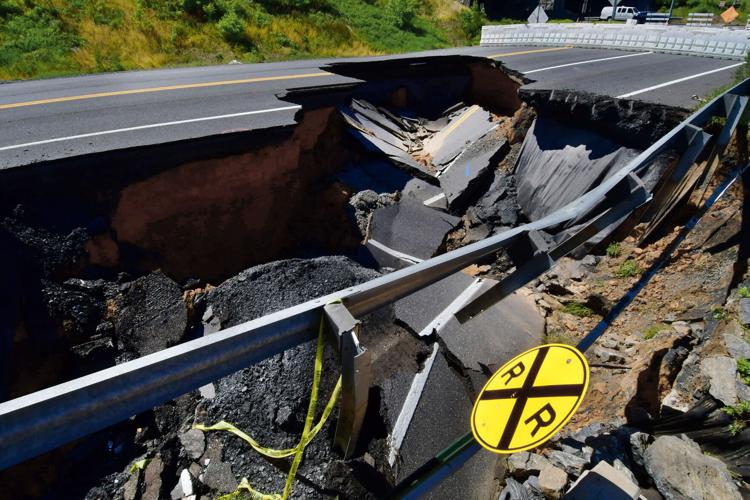 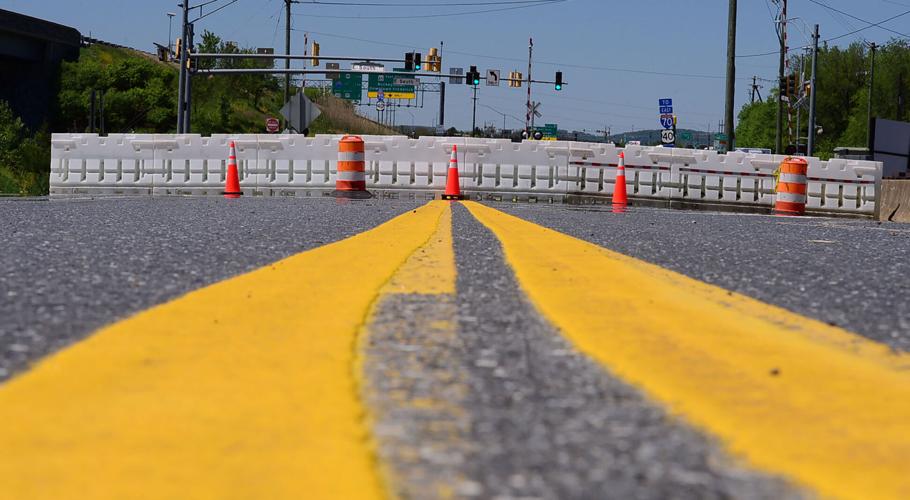 The city of Frederick is still developing a timeline and cost estimate to fix a section of Monocacy Boulevard closed after a sinkhole caused part of the road to collapse.

But the State Highway Administration is confident that the issue shouldn't affect traffic on a section of Interstate 70 that runs near where the sinkhole expanded over the weekend.

Monocacy Boulevard will be closed near the intersection of East South Street for the foreseeable future as the city plans repairs to the road and a water line that was damaged by the sinkhole, Tracy Coleman, the deputy director of public works, said Monday.

The city will put out an emergency bid for repairs once plans are finalized, she said.

The hole started Wednesday in a drainage swale well off the roadway. By Thursday, it was clear that the hole had begun to undermine the road, Coleman said.

By Friday morning, the road visibly had settled much more. A major collapse happened later Friday at a bend in the waterline that runs under and along a stretch of Monocacy Boulevard, she said.

The city believes the heart of the sinkhole is beneath the westbound lanes of Monocacy Boulevard, she said.

The situation was probably exacerbated by the heavy rain on Friday, she said.

“I think the rain made it a lot worse,” Coleman said.

Meanwhile, the SHA is communicating with the city, but doesn't believe the collapse will affect I-70 next to Monocacy Boulevard.

"Based on the current status and initial evaluations, there are no indications that this sinkhole could widen and impact I-70 at this time,” SHA spokeswoman Shantee Felix wrote in an email Monday. “Our district team that handles this region has been in constant communication with the City of Frederick, particularly due to the detour that affects our ramps and the proximity to I-70. We have been providing information and assistance to the City of Frederick as needed.”

Monocacy Boulevard will be closed from the Royal Farms store at Interstate 70 to East South Street. The city is advising drivers to avoid the area if possible.

Maybe, just maybe, the City of Frederick can find the needed funds to repair the sinkhole in the excess taxpayer money they were going to waste on building all those (much needed,.. NOT !!!) traffic calming measures, ,,,, signs, speed bumps, roundabouts, and “choke points” that are being planned around town.

Get used to this folks. Climate change. That's the cause. I'm sure of it.

Nothing to do with climate change.

The sinkhole issues in Frederick, MD, have been out of hand for years now. Many homeowners have been impacted by loss or damage to their homes and properties as well as the city for escalating repair costs incurred. Some of my neighbors lost their homes due to ongoing issues with sinkholes. The pain and suffering alone was uncompensated.

It is not only necessary but should be required for MDE to necessary dye trace testing on the current massive sinkhole in Frederick, MD, to determine if the groundwater flow discharges into the quarry. I’m sure it will. They pump hundreds of thousands of gallons of groundwater out daily, and with our underground karst topography, it is destined to cause multiple problems.

As a resident in the “zone of influence,” I have serious concerns for public safety in addition to my concerns for the safety in my own home and on my property. I recently discovered that a large sinkhole bordering my property (and encroaching into my property) that was repaired by the developer Hamilton Square, LLC (building contractor Southway Builders, Inc) was done by a private contractor, and MDE was neither informed nor involved. This is unethical and highly concerning.

Everything surrounding the sinkhole issues in Frederick is very hush-hush because of the industrial tax base that the quarry provides. This alone should be enough to alert appropriate authorities that investigation is long overdue. Where is the accountability?

"But the State Highway Administration is confident that the issue shouldn't affect traffic on a section of Interstate 70 that runs near where the sinkhole expanded over the weekend."

Did the state run ground penetrating radar tests before making that statement?

I didn't realize they started construction on the tax payer subsidized "courtesy" hotel/conference center. That sure looks like a big money pit. I guess sometimes it's hard to tell a sink hole from a money pit.

Send the bill to the quarry. Their operation disrupts the underground water flow. Look at how many sink holes have happened over the years close to that operation. They should at the very least provide the materials gratis to fill it up.

When the new Royal Farm sinks and gas tanks break and contaminate the ground will that be on RF to clean up, or on the City because they allowed building on ground that has been known to have sink holes for many, many years?

Wonder if the City will conduct a study before they do anything?

Ancient aliens would know what to do

I’m amazed that the roadway collapsed of its own accord, so to speak, rather than when a vehicle was on it.

What happens is a “throat” forms in the limestone. And, this must be one heck of a big throat

That reminds me of "the hellmouth" underneath Sunnydale in "Buffy the Vampire Slayer".

It sounds like you were one lucky guy, CD

I sure do know. It’s part of what we do.

That whooshing noise is the joke sailing over her head. [innocent][beam]

Yeah, I don’t think pb caught my puns either.

I suppose one could dodge it.