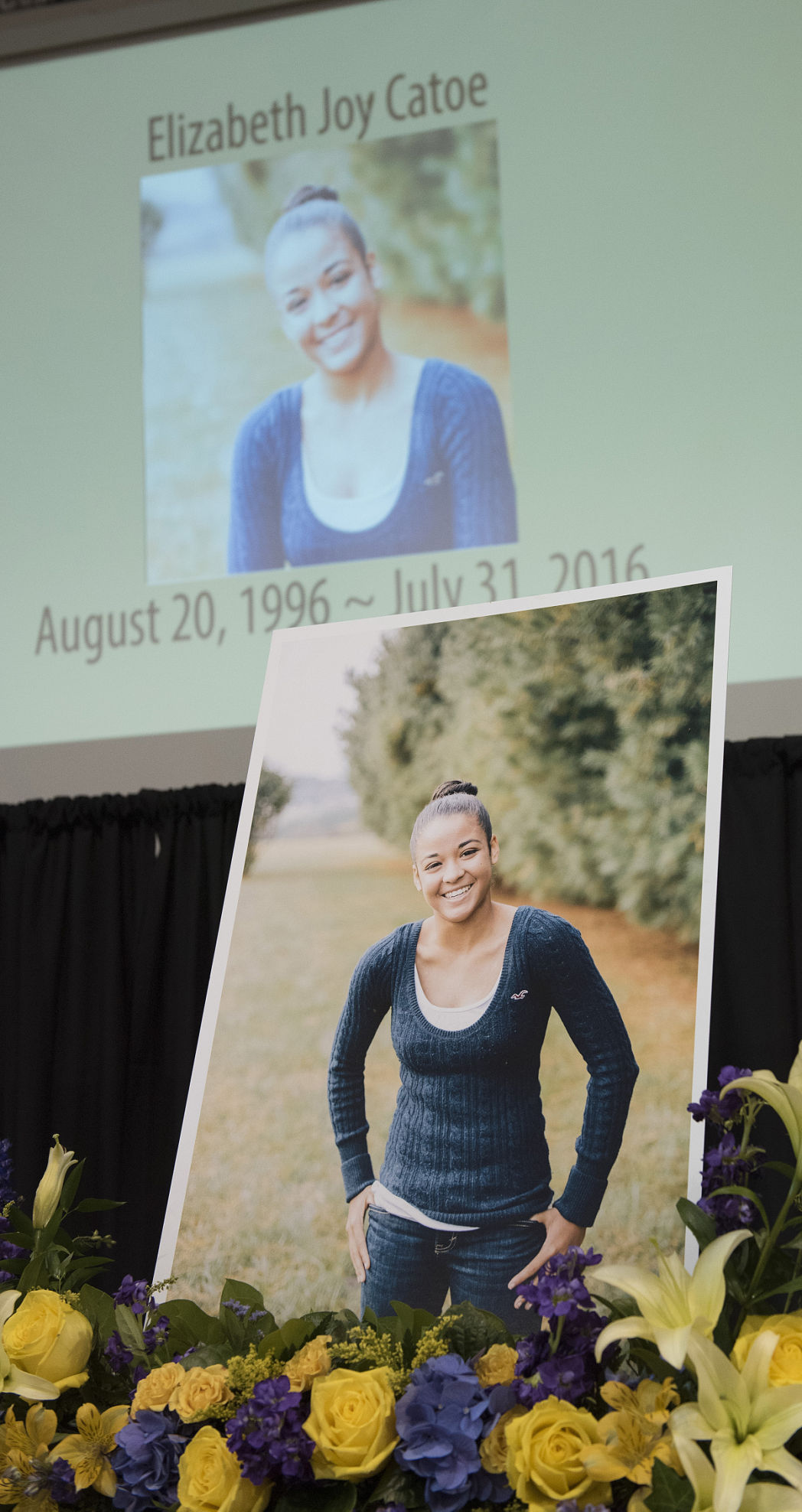 A large photograph of Elizabeth Catoe was on the stage at New Life Christian School during a memorial for the teen, who died in a car crash last week. 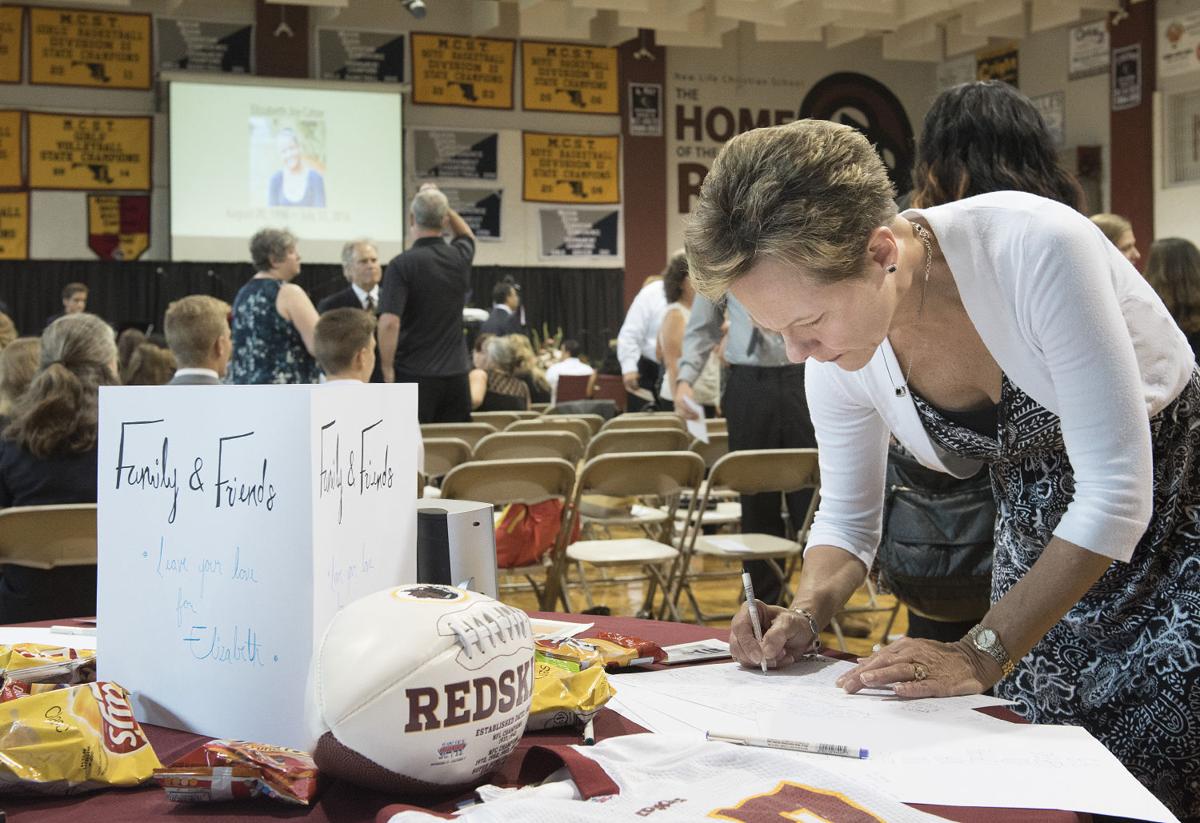 A large photograph of Elizabeth Catoe was on the stage at New Life Christian School during a memorial for the teen, who died in a car crash last week.

The basketball court in New Life Christian School’s gymnasium witnessed some of the most memorable moments in the life of Elizabeth “Liz” Catoe.

State championship banners hang on the walls, seven from seasons the Lady Rams basketball team won with the talent of the 5-foot-1 point guard. Liz’s number 23 jersey adorns another wall, boasting her 1,213 points scored and 434 steals, as well as her MVP honor in the Mason Dixon Christian Conference in 2014.

The hardwood court was where she came to practice and play, to shoot free throws on weekends and in summers even after she graduated in 2014. Just two weeks ago, the Point of Rocks resident laced up her sneakers for a few hours of practice in the maroon and white-accented gym.

It would be her last time in the place her high school coach, Brian Roynestad, referred to as her second home.

Liz died on Monday from injuries suffered in a car crash the day before. She was 19 years old.

A standing room-only crowd packed the same gymnasium on Saturday afternoon in a memorial service to celebrate and honor her life. Friends and family members highlighted her passion and talent for the sport, which led her to play for several colleges and universities since graduating New Life.

“She probably wishes this many people showed up to her basketball games,” Roynestad said in an interview before the service, gesturing to the hundreds of people crowded into the bleachers, folding chairs and along the back wall of the gymnasium.

“Tenacious,” “a firecracker” and “fiercely competitive” were among the words used to describe Liz, both on and off the court. Her “give-it-her-all” attitude extended to all aspects of her life, including her studies.

Liz graduated from New Life with honors. She first attended Capital University in Columbus, Ohio, then transferred to Carlow University in Pittsburgh, Pennsylvania for her second year. She was planning to attend Urbana College in Urbana, Ohio, for her third year, where she hoped to study pre-law and philosophy with a minor in sports management.

Roynestad explained her multiple changes in university to basketball-related injuries, but emphasized her commitment to a college education.

Kevin Gardner, a social studies and English teacher at New Life, also spoke to Liz’s academic talents from the four years he taught her.

“She was as passionate about classes as she was about basketball,” he said. “She was determined to do well.”

Gardner’s classes were among her favorites, schoolmate and teammate Julia Hamrick said.

“Probably because I let her have candy,” Gardner said with a laugh.

His was not the only joke in the otherwise somber event, nor the only reference to Liz’s pervasive sweet tooth. Sour Patch Kids were her favorite, devoured by the bagful in class, after practice and with friends.

Renee Dietrich, Tom Dietrich’s wife and neighbor to the Catoe family, recalled using candy to convince a young Liz to refer to her as “Aunt Nee” instead of “Mrs. Dietrich.”

“She paused and decided she’d love me like an aunt after all,” Renee Dietrich said.

Friends remembered fun and conversation shared over bags of chips, and runs to Wawa for milkshakes, often accompanied by a car ride dance party. Videos played throughout the service captured many of Liz’s dance moves, always accompanied by a wide smile.

“Her smile, it pierced your soul,” said Aileen Maknati, a fellow Lady Rams basketball player and New Life Class of 2012. “And those cheeks, you just wanted to pinch them.”

Her younger sister, Maria Catoe, said Liz relied on her makeup expertise to contour her round cheeks. Maria imparted much of her styling knowledge onto her older sister, teaching her how to braid her hair or put it in a bun.

“I’m going to miss watching you paint your nails,” she said, speaking directly to her sister. “You sucked at it. You would whine until I did it for you.”

Rebecca Catoe, her older sister, shared memories of breaking into song together, including renditions of “Jesus Loves Me” to drown out the scary parts of a horror movie.

Many made reference to Liz’s faith as her greatest passion of all.

Video footage of her testimony during the school’s Spiritual Emphasis Days event played during the service. Liz, somber-faced in her pink tie-dye T-shirt, spoke to a sort of spiritual epiphany she experienced during the retreat. She apologized to her classmates for hurtful or unkind things she had said or done in the past, and promised a commitment to “the ways of Jesus.”

More than her testimony, though, it was the little, everyday things that friends and family pointed to as examples of her faith — befriending those who most needed it, standing up for her friends and siblings, making those around her feel comfortable.

“Liz had such an incredible ability to love those who the rest of us might find difficult to love,” said Abigail Buckham, a neighbor and longtime friend.

“She taught me the power of vulnerability and to be yourself no matter what,” said Rebecca Stroup, another friend.

Michael Catoe, her brother, encouraged those at the service to continue in her lead-by-example style, turning to her joy as a light amid suffering and confusion over her death.

A 19-year-old Point of Rocks woman died Monday from injuries she suffered in a car crash on Sunday.