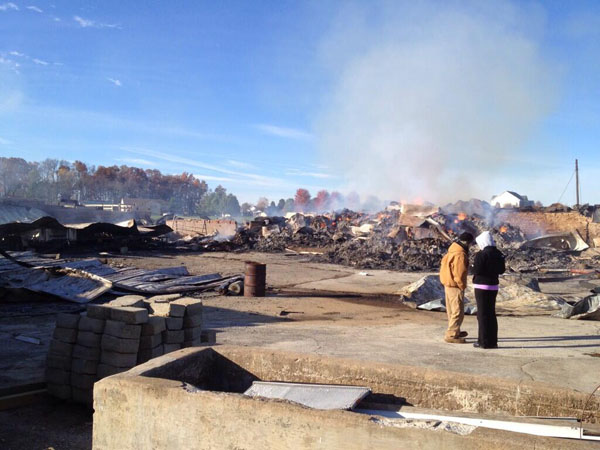 Barn debris is still burning at a Jefferson farm hours after a blaze tore through the structure. 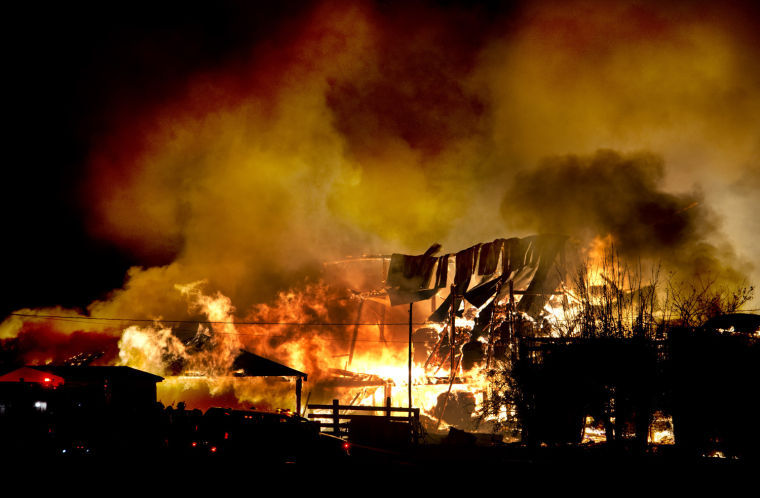 A large barn and at least one other building was destroyed by fire in the 6000 block of Holter Rd. at about 12:30 a.m. Monday. Firefighters on the scene were trying to save nearby buildings. Staff photo by Sam Yu 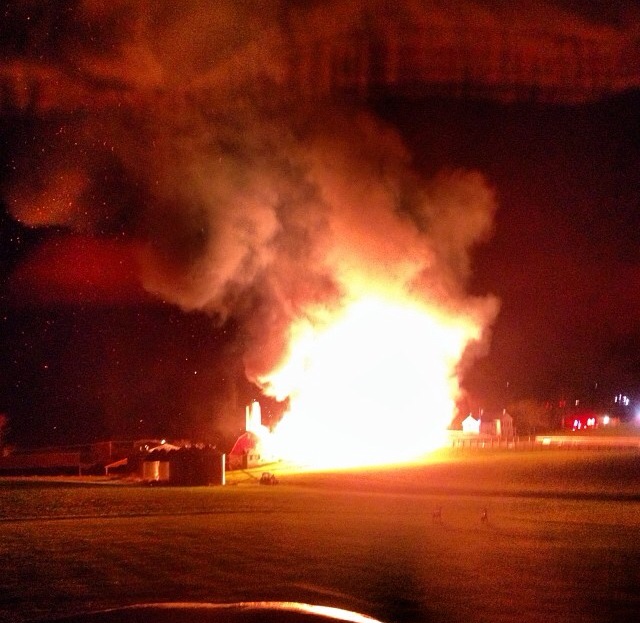 Barn debris is still burning at a Jefferson farm hours after a blaze tore through the structure.

A large barn and at least one other building was destroyed by fire in the 6000 block of Holter Rd. at about 12:30 a.m. Monday. Firefighters on the scene were trying to save nearby buildings. Staff photo by Sam Yu

Piles of hay bales, tools and debris still burned and smoke still filled the air by 9 a.m. Monday at a Jefferson farm.

A blaze that leveled a barn and two sheds early Monday is under investigation.

The fire broke out around 12:15 a.m. at 6102 Holter Road, according to Doug Brown, a spokesman for the Frederick County Division of Fire and Rescue Services.

Brown said about 60 firefighters and a tanker task force responded to the blaze since no fire hydrants were nearby.

"They arrived to find the barn well-involved," said Brown.

Mike Monroe, 18, who rents a house that sits just in front of the now-destroyed barn, said 30 chickens were burned inside along with several pick-up trucks, trailers, tools, compressors and sorted furniture.

"The good thing is that it didn't quite make it to the house," he said.

He said he had no speculations on what may have caused the fire.

Brown said fire investigators will investigate the blaze to determine its cause and estimated damages.

Monroe said their home lost power in the fire and is expected to be without power for the remainder of the week.

Seems like we have an unusual number of barn fires in Frederick County. Firebug at work?

The barn fire in Wolfsville was exactly one month ago - there's been no report yet as to the cause of that fire. And that gang of arsonists who were caught last spring were setting fires in Washington County and western Frederick County, the biggest one of which was in Boonsboro, not far from either of these locations.

Sad for sure. I remember when Urbana lost a historic farm house on Park Mills Road a few years ago. Can't replace the cool old stuff.

Sad,,,very sad.I alway's loved this farm.It was for sake for a long time and I alway's hope I would win the lottery and go buy it.The people that bought it cleaned it up alot.Put new fencing and added a riding ring and have beautiful horses.I heard about it just after 12:30 and took a ride not knowing exactly what was on fire on Holter Road.When I saw what it was I felt so bad for them and hope humans and anumals were all safe.The farm had such great possibilities.My thoughts are with them.

Sorry for the loss.

So sorry for your loss.