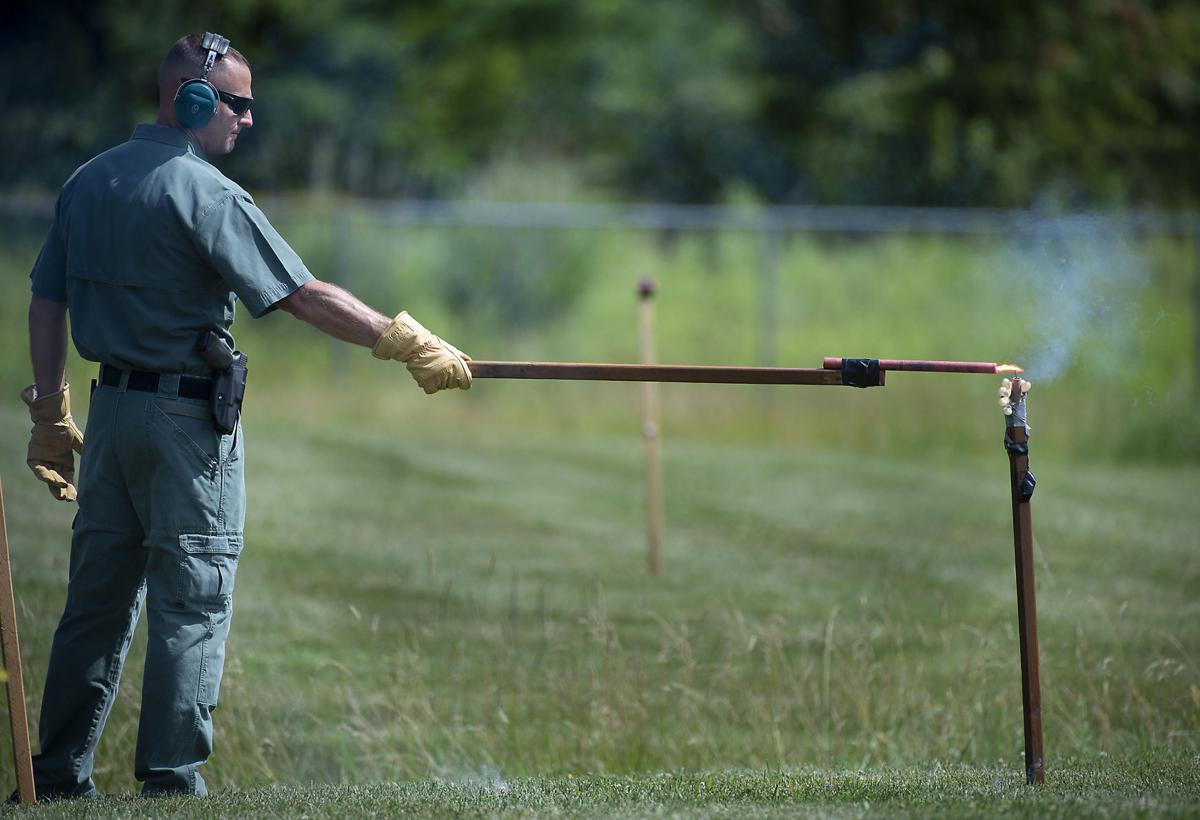 Cory Hurst, senior deputy state fire marshal, uses a traffic flare on a long pole to safely light the fuse to a firecracker placed in a rubber hand during a fireworks safety briefing in Howard County Wednesday morning. The firecracker exploded and sent pieces of the hand flying in all directions. 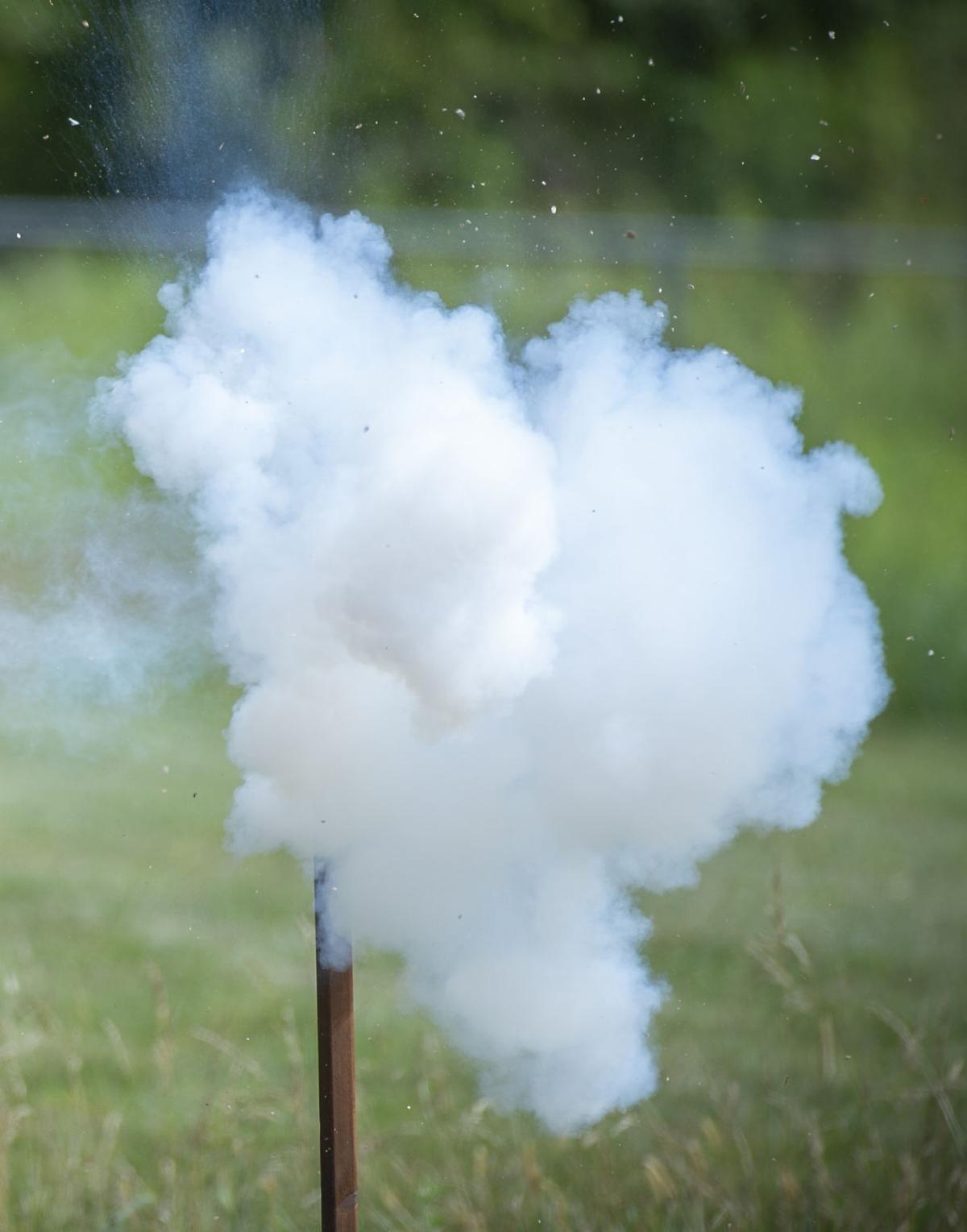 A fireworks safety exhibition in Howard County Wednesday morning sent pieces of debris flying after several of the demonstrations.

Ground-based sparklers are the only legal and permitted fireworks that can be used in Frederick County. Approved sparklers will include the information pictured here.

Cory Hurst, senior deputy state fire marshal, uses a traffic flare on a long pole to safely light the fuse to a firecracker placed in a rubber hand during a fireworks safety briefing in Howard County Wednesday morning. The firecracker exploded and sent pieces of the hand flying in all directions.

A fireworks safety exhibition in Howard County Wednesday morning sent pieces of debris flying after several of the demonstrations.

Ground-based sparklers are the only legal and permitted fireworks that can be used in Frederick County. Approved sparklers will include the information pictured here.

An exploding cantaloupe, burning mannequin and soot-covered egg served as reminders this week of the dangers fireworks can pose to people who misuse them.

Regional fire and medical professionals all too familiar with the increase in fireworks-related deaths and injuries around this time of year gathered at Howard County Public Safety Training Center in Marriottsville on Wednesday to urge residents to exercise caution while celebrating the Fourth of July.

"Don't have a backyard tragedy," State Fire Marshal Brian S. Geraci said in a news conference. "We see it every year, and we want to just make sure everybody has a safe Fourth of July ... "

Outside the center, a trained professional ignited various fireworks beside a mannequin donning a loose T-shirt, which caught fire from a sparkler. Fireworks were also lit next to a hardboiled egg, meant to symbolize the fragility of the human eye, and a cantaloupe.

Ground-based sparklers are the only legal and permitted fireworks in Frederick County, according to a joint news release from local fire and law enforcement officials. Any residents found with other fireworks can be issued citations with fines and have illegal fireworks confiscated.

There were more than 200 fireworks complaints within Frederick County July 3-4, 2020, which included the confiscation of illegal fireworks.

Chief Tom Coe of the Frederick County Division of Fire and Rescue Services recommends locals attend a public fireworks show put on by professionals. Around the Fourth of July, the agency experiences an increase in medical calls and calls to extinguish fires related to fireworks.

"We tend to run a lot of fireworks-related incidents ... and that's why we're so passionate that the public stick to using authorized fireworks," Coe said in an interview.

There were 15,600 treated injuries and 18 deaths related to fireworks across the country in 2020, Geraci said, compared to 10,000 injuries and 12 deaths in 2019. Of the 2019 figures, children under 15 accounted for 36 percent of injuries. Last year, he said the state fire marshal's office logged about 15 injuries and 30 fires caused by fireworks.

He acknowledged those numbers are likely lower than reality — it's believed some people don't report fireworks-related incidents to avoid fines for using illegal fireworks. Possession and use of illegal fireworks is a violation of state law and is subject to fines up to $250 per item, Geraci said.

The spike in injuries and deaths from 2019 to 2020 was not unexpected. As the COVID-19 pandemic contributed to the cancelation of public fireworks displays last year, people set off fireworks at home.

"Unfortunately, we saw a very bad year last year, as we anticipated, due to the lack of public fireworks display[s] throughout the state of Maryland," Geraci said.

Now, permits for displays are coming in "droves" to their office, according to Geraci, so the public should have numerous opportunities to attend professionally-organized fireworks displays.

Area doctors offered advice on how to treat injuries and warned against misuse.

Fireworks can wreak havoc on the very fragile human eye, according to Dr. Dean Fiergang, a pediatric ophthalmologist representing the Maryland Society of Eye Physicians & Surgeons. Using a softball-sized model of an eyeball, he detailed how damage to the cornea and retina can contribute to loss of sight. More than a third of fireworks-related injuries will permanently damage someone's eye, he said, many of which belong to children.

If someone suffers a fireworks injury to the eye, Fiergang recommends it be loosely covered with a patch or shield, even by taping a credit card to the brow and cheekbone over the eye. Don't rub or rinse the eye or try to remove an object, but do take the victim immediately to an eye doctor or ER physician.

At The Curtis National Hand Center in Baltimore, Independence Day is "far too busy," according to surgeon Dr. Ryan Zimmerman. Approximately one-third of fireworks injuries are to the hand.

"Hand injuries from fireworks are hard to fix, sometimes impossible," he said.

If a person suffers an amputation injury, Zimmerman suggests collecting the amputated part and wrapping it in moist gauze inside a plastic bag filled with water and ice. The injured person should immediately be taken to the ER. Putting an amputated body part directly on ice could cause frostbite and prevent it from being reattached, he said.

At the Johns Hopkins Pediatric Burn Center, staff see the "worst of the worst," according to the program's assistant director, Dr. Erica Hodgman. Last year, they saw 10 to 20 major injuries around the Fourth of July. Sparklers caused deep burns, and cherry bombs exploded in a child's pocket, she said.

A common thread among the speakers Wednesday was to "leave the fireworks to the professionals," as Howard County Fire Chief Bill Anuszewski said.

How will you spend your Fourth of July weekend? Here are some ideas.

Whether you’re looking to catch a fireworks display or want to pack a picnic, hear live music, and make a day of it, there’s lots going on thi…