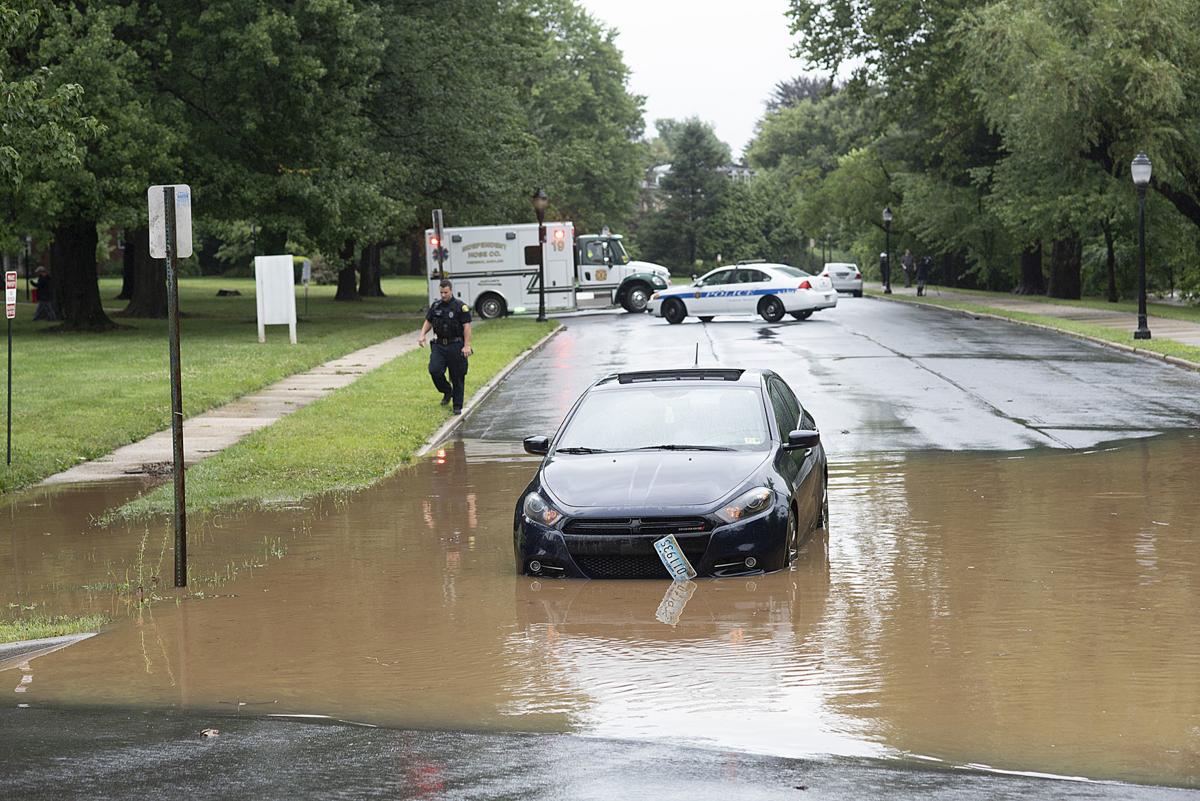 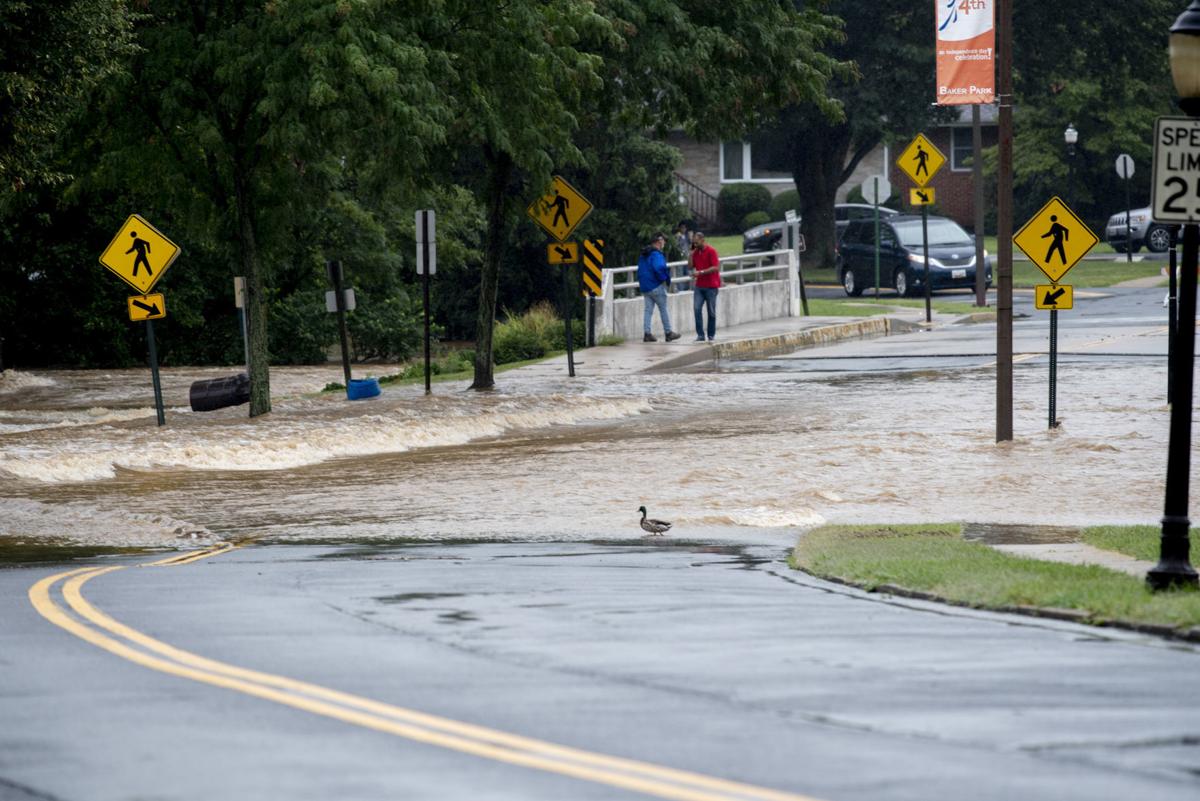 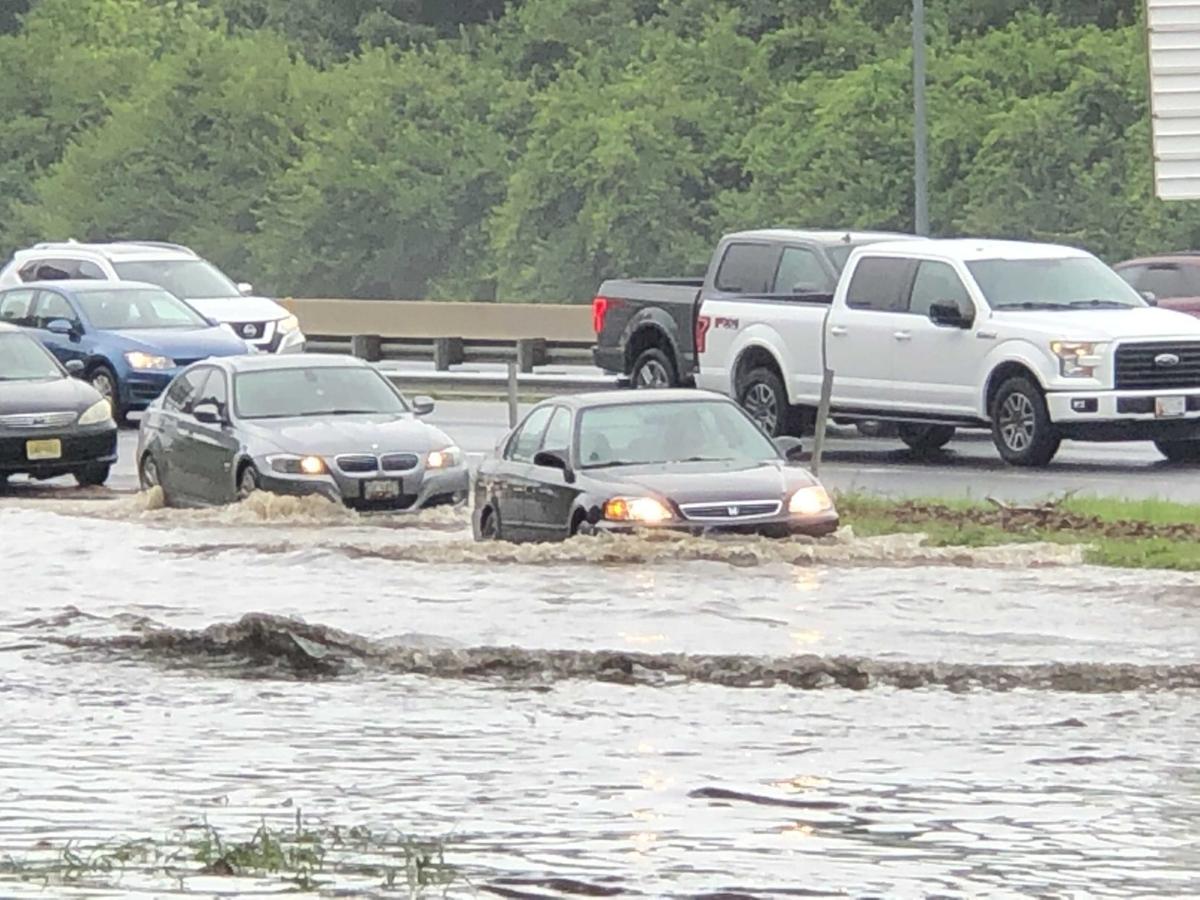 Monday morning’s flooding closed several roads in Frederick County and in the city of Frederick, including the exit ramp from Interstate 270 onto U.S. 15. 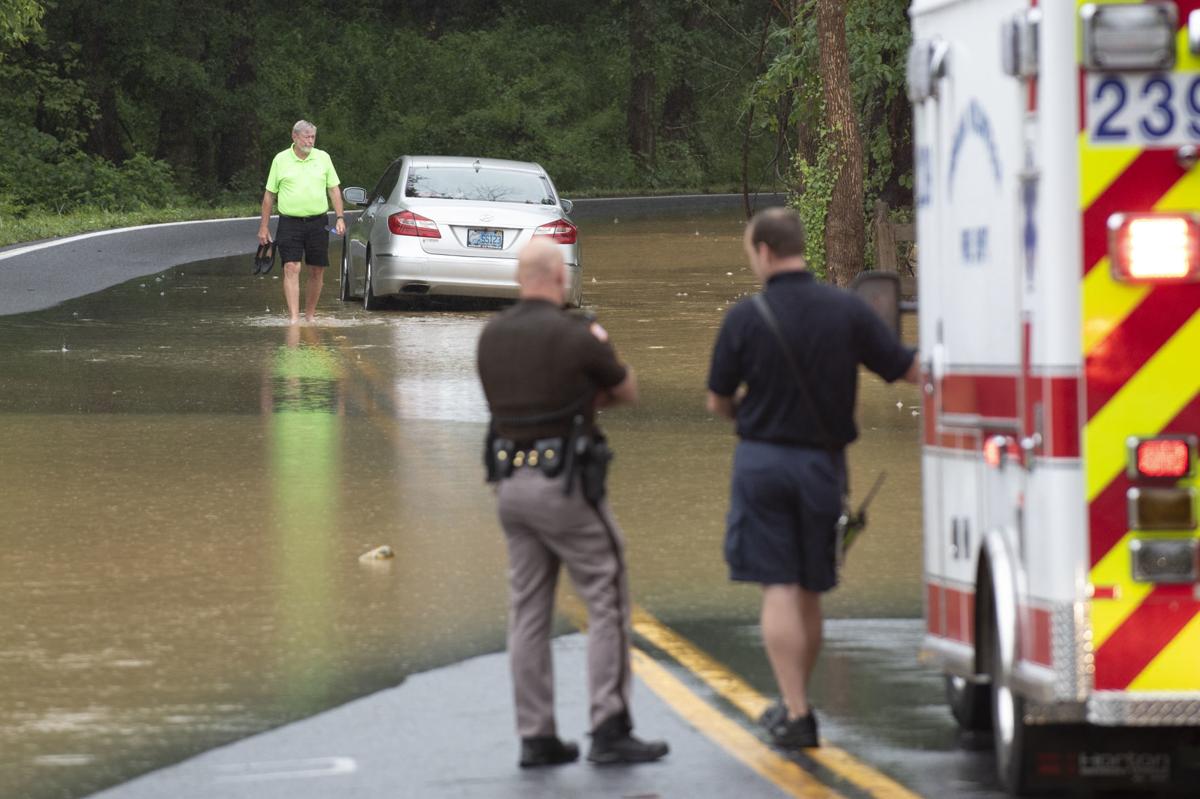 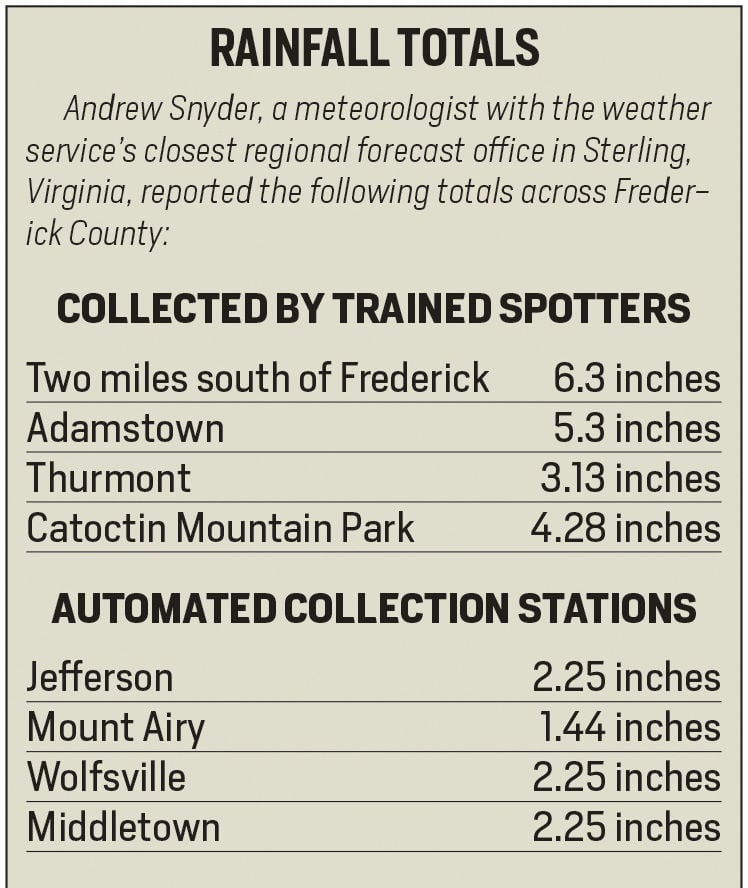 A burst of several inches of rain fell in just a few hours Monday morning, causing flooding at Baker Park and several roads during morning commutes.

But all in all, flood-prone areas throughout the county avoided extensive damage, likely due to happenstance or measures taken in the last couple of years.

Scenes from the flood

Monday morning’s flooding closed several roads in Frederick County and in the city of Frederick, including the exit ramp from Interstate 270 o…

Baker Park flooded Monday morning after as much as 6 inches of rain fell on Frederick County.

A sinkhole opened at the Darcars Kia dealership on Urbana Pike.

A view of Opossumtown Pike from inside a TransIT bus Monday morning.

A car is seen in floodwater along the Golden Mile in Frederick on Monday morning.

Rainfall totals in the past 24 hours (preliminary)

Baker Park experienced flooding after several inches of rain fell in Frederick County and the city of Frederick.

Some areas experienced locally higher amounts due to a variety of factors, with the highest amount coming from a measuring station about 2 miles south of Frederick for roughly 6.3 inches of rain, said Howard Silverman, a meteorologist with the National Weather Service in Sterling, Virginia. While such extreme amounts are worrisome, the concentration of rain was more concerning.

The YMCA on North Market Street, which sustained significant water damage in the previous floods, was relatively dry after Monday's rainfall. Only a small amount of water came up through a drain in the kitchen of the early learning center, which is in a low-lying area of the site, said Chris Colville, the president and CEO.

Many homes near the YMCA experienced flooding and the center would likely have flooded again if not for the preventive measures put in place after both the 2015 floods and the more recent flooding last year, Colville said.

"We’ve installed both exterior flood doors and a flood plank system that needs to be put in place, so early this morning, as we realized the alley was starting to fill up with water, we were able to put that in place," Colville said. "And you can see we had about 10 inches of water that came up on the flood plank system, so the flood planks and the flood walls did their jobs. If they hadn’t been in place, then we would’ve had more damage."

Preventive measures, though, will only go so far in protecting the center, Colville said, adding that she hopes the city continues to shore up its own infrastructure to handle future flooding.

"I think there’s still some concern though about just the stormwater management system that runs parallel to the Y, it was definitely surging and definitely over capacity. ... There’s still some need for the city to continue to focus on this area, the problem is not solved, and we’re still at risk," Colville said.

Other areas, such as Brunswick, which experienced major flood damage in 2018, and Fort Detrick, reported no problems other than some pockets of water on fields and in drainage areas. In Buckeystown, issues with standing water were reported on Md. 85 just north of Manor Woods Road.

Nannette Jenkins, who has lived near Manor Woods Road for roughly four years, said she was preparing for summer camp with her daughter at around 7:30 a.m. when she noticed the area was flooded. Though she called the police to report the high waters, she felt the flooding wasn't as bad as in May 2018.

The only way to fix the frequent flooding, she said, would be to install a storm culvert in the area. But that would probably require a road closure.

"It's one or the other," Jenkins said with a laugh.

Paul Lebo, chief operating officer of Frederick County Public Schools, said in a prepared statement that the school system did not have any significant problems at any of its facilities.

"Any minor issues were addressed by maintenance and custodial staff and all buildings are operational," said Lebo, who indicated that the system doesn't expect any Tuesday programming to be impacted.

But there were issues. A wastewater overflow began at the Frederick Wastewater Treatment Plant's capacity at around 8 a.m., the city said in a news release.

That overflow "is occurring in front of the Wastewater Treatment Plant into Carroll Creek, immediately upstream of the Monocacy River," the release stated. The city's drinking water supply is not affected by the overflow.

Most of the calls were in the city of Frederick, predominantly in the areas of Market Street, Patrick Street and Carroll Parkway, Barnes said.

Much of the flooding receded by 2 p.m., Barnes said, much quicker than floodwater drained during the flood that occurred in May 2018. Floodwater lessened quicker this time because the storm moved faster, Barnes said.

“It was a big difference. This storm dumped a lot of water quickly and then moved on,” Barnes said. “Where as during last year’s significant weather event stalled over the region, continuing to dump rain.”

But just because the rain let up doesn’t mean the swift water rescue team is out of the water. Now their attention turns to the rivers in the county.

“People like being on that kind of water,” Barnes said.

At about 2:15 p.m., the swift water rescue units responded to a call on the Monocacy River for a potential rescue near the boat ramp by At Home furniture store off Monocacy Boulevard. The team found only an empty raft.

Even though the heaviest rainfall was well south of Frederick County shortly before noon, water levels will likely remain high because of the amount of rain that fell in a relatively short amount of time.

The National Weather Service expects a much different day Tuesday when conditions were expected to be mostly sunny with a daytime high in the mid- to upper 80s. Sunny skies will continue Wednesday with temperatures in the upper 80s before the chance for more clouds and rainfall moves in Thursday.

As of noon Monday, the following roads were closed due to high water or flooding in Frederick County:

How the flood of 1976 changed Frederick: Carroll Creek flood control project is one of a kind

Walking along Carroll Creek in downtown Frederick, few visitors might realize they’re walking atop a buried concrete river, created to avoid a…

Not sure what the alternative solution would have been, and in retrospect of the time, unfortunate Baker Park was to become flood control reservoir in order to protect downtown business & County properties.

It seems to me that a park is the perfect place for flood control.

Dick, there you go asking embarrassing questions again. You know the unspoken rule is, "Don't take any action that might slow development". Talking endlessly about saving the Monocacy River is fine, as long as that's all it is -- *talk* -- and there are no regulations adopted that might adversely affect growth. You know, silly laws like, "Dumping raw sewage in the river = BAD."

Re the picture of the flooding on West College Terrace, note that the duck has the sense to stay on the dry section of road. Some people don't have the common sense that Mother Nature gave a duck.

I've spent time around both Baker Park and actually hazardous flooding situations, and the danger level looks pretty low there...but, hey, any excuse to whine about the kids and their social medias these days, amirite?

Get used to it. We'll be seeing a whole lot more of these...

KR999: I'm sure they'll pay, but the driver's premiums will likely increase.

Frederick's resident expert on all things weighs in on today's news. Awesome.

I’m seeing the armchair warriors are out today! LOL Calling or implying that people stranded in the water are stupid. I was driving in Frederick at 6:00 am. It was still dark. I was on Butterfly Lane, driving along, and just like that, because of the heavy downpour, and it being dark outside, I encountered standing water where the new apartments are. Due to the conditions, it was impossible to see what was ahead. This can happen to ANYONE.....under such conditions. Me, I was in a diesel truck that has ground clearance. Diesels don’t usually stall out in high water like gassers do, as they don’t have ignition systems like gassers. But, had I been in a car, it’s possible I may have gotten stranded. Crazy storm. Insane rain. And at the worst time.

The primary reason that gassers stall in high water has nothing to do with ignition, but rather sucking water into their intakes. Diesels have the same problem.

Oh boy here we go. Telling someone who is a mechanic about how it is. Ignition systems get “wet”, from the water splashing. And that’s what I was referring to. Without writing a volume on the subject

Yes, but in driving through floodwaters that does not usually disable a vehicle (they are rain proof, after all). Sucking water into the intake is the killer, which is why even gassers that want to drive through high water have an elevated snorkel intake.

4.6 inches in our gauge at 7 am this morning. Eastview neighborhood, between Bowers Road and Shookstown.

Got about the same on the Middletown side of the mountain.

Down in town, Gabe?

There is such a thing as a "Stupid Motorist Law" in AZ. Image result for stupid motorist law in AZ?blogs.mprnews.org The "stupid-motorist law" is a law in the U.S. state of Arizona that states that any motorist who becomes stranded after driving around barricades to enter a flooded stretch of roadway may be charged for the cost of their rescue.

Kelly makes a good point above -- it is not always obvious that water on a road is dangerously deep -- but yeah, certainly when there are barriers and a motorist drives around them, that qualifies as stupid. In fact, while "accidents happen" and some mistakes are reasonable, there are many cases (not only involving motorists) where a person should pay for their rescue -- boating when a river is dangerously high; hiking or climbing without proper gear, etc.

It was nuts out there this morning.

Anyone know what road is pictured in the photo?

I believe it is the exit from 15N to Jefferson St.