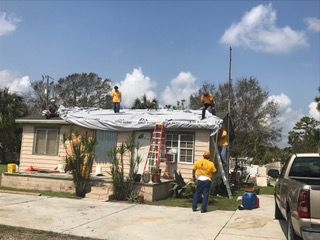 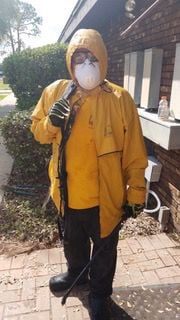 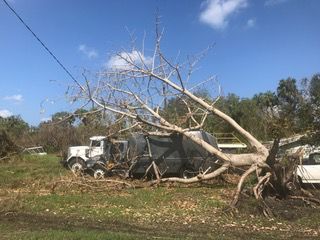 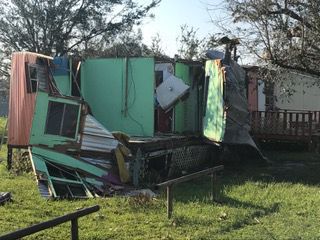 Maryland members of Southern Baptist churches assisted in recovery efforts in Immokalee, Florida. One family lost all of their personal belongings and their home. 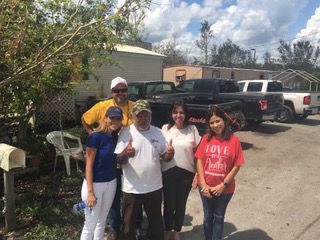 Maryland members of Southern Baptist churches assisted in recovery efforts in Immokalee, Florida. One family lost all of their personal belongings and their home.

After Hurricane Irma left parts of Florida in need of a massive rebuilding, some Frederick County residents answered the call.

Alan Caho, a Middletown resident and retired Frederick County sheriff’s deputy, recently returned from Immokalee, Florida, where he and other Maryland members of Southern Baptist churches were engaged in recovery efforts.

“The folks down there are pretty resilient,” Caho said. “But looking at rebuilding and starting over again, especially with the older population, that is a lot for them.”

Dozens of volunteers with Baptist groups have deployed to Immokalee since not long after Irma dissipated, according to Bruce Conley, director of missions for the Blue Ridge Baptist Association.

The Blue Ridge Baptist Association, which includes churches in Frederick County, is part of the North American Mission Board, a cooperative of state Baptist conventions that finances disaster relief missions.

The North American Mission Board claims to be the third-largest disaster relief agency in the United States, behind the Federal Emergency Management Agency and the Red Cross. The association’s cooperative arrangement minimizes administrative costs and allows donations to go directly to relief efforts, Conley said.

Doug DuBois, of Middletown, also deployed to Immokalee with the Baptist Convention of Maryland/Delaware. With more than 30 volunteers, the state convention has sent relief units: RVs equipped with generators, construction equipment, laundry machines and shower trailers.

Volunteers in the aftermath of Hurricane Irma’s heavy rain and 130 mph winds have focused on making homes habitable before more damage can be inflicted. DuBois, Caho and others are helping tarp damaged roofs and walls, pumping flooded homes, and distributing food and water.

“We’re doing emergency triage, like a MASH unit,” DuBois said. “We stop the bleeding, so to speak.”

“We spent the whole week putting temporary emergency roofing on houses, boarding up sides with plywood,” Caho said. “Just trying to weatherproof the homes, so they won’t take any more damage, so families can return.”

Maryland Baptist volunteers answered requests for assistance from a church in Immokalee. They’ve been working with local residents to get past language barriers and build trust in the affected community, Caho said.

Immokalee is an unincorporated community about 25 miles southeast of Fort Myers. Inland from Florida’s tourist destinations and beach communities, Immokalee is home to more than 24,000 people. Almost half of the population lives below the poverty line, according to the U.S. Census Bureau. Seventy-five percent of residents are Hispanic, and many are immigrants. Most adults work on farms or in the service industry. The median annual household income is $26,684.

Sixty percent of residents live in rental housing, according to the census bureau. As the Naples Daily News reported, many residents whose older trailer homes were damaged by the storm were living in schools and gymnasiums after the hurricane.

“What made Immokalee unique was the level of poverty in the area prior to the storm,” Caho said. “A lot of homes were not in good repair, so they just got torn apart.”

In the face of so much damage and loss, Immokalee residents are surprisingly resilient, DuBois said.

“They’ll tell you that they’re not the worst ones. They’ll say to go down the street, there is someone who needs more help,” he said. “They’ve lost everything, but they’ve cooked us food and come to church with us. It’s a great community.”

Thirty Maryland volunteers have been in Immokalee for the past two weeks, Conley said. But the faith-based organization will likely have a presence in the area for the next few months.

DuBois, the Baptist Convention of Maryland/Delaware’s state director of disaster relief, said he will likely travel back and forth between Florida and Maryland in the coming months.

The Baptist Convention of Maryland/Delaware is collecting donations to fund its ongoing efforts and is seeking volunteers to train for upcoming deployments, according to Conley. The convention is preparing for relief efforts in Puerto Rico.

“If anyone in the region wants to be trained and go on a trip, we recently streamlined our training certification process,” Conley said. “You can get certified and the next time a team deploys you can go cook, build, clean. There are all kinds of ways to help.”

Caho recently returned to work as the emergency manager at Western Maryland Hospital Center in Hagerstown.

“Personally, my October is filled up, but if the Lord leads me down to Puerto Rico in November, there’s a good chance I might go,” he said.

Donations to organizations in south Florida can be made at secure.actblue.com/donate/immokalee.

When Sal and Latha Dangamuwa visited the U.S. Virgin Islands in September, they didn’t expect to be responding to another humanitarian crisis.