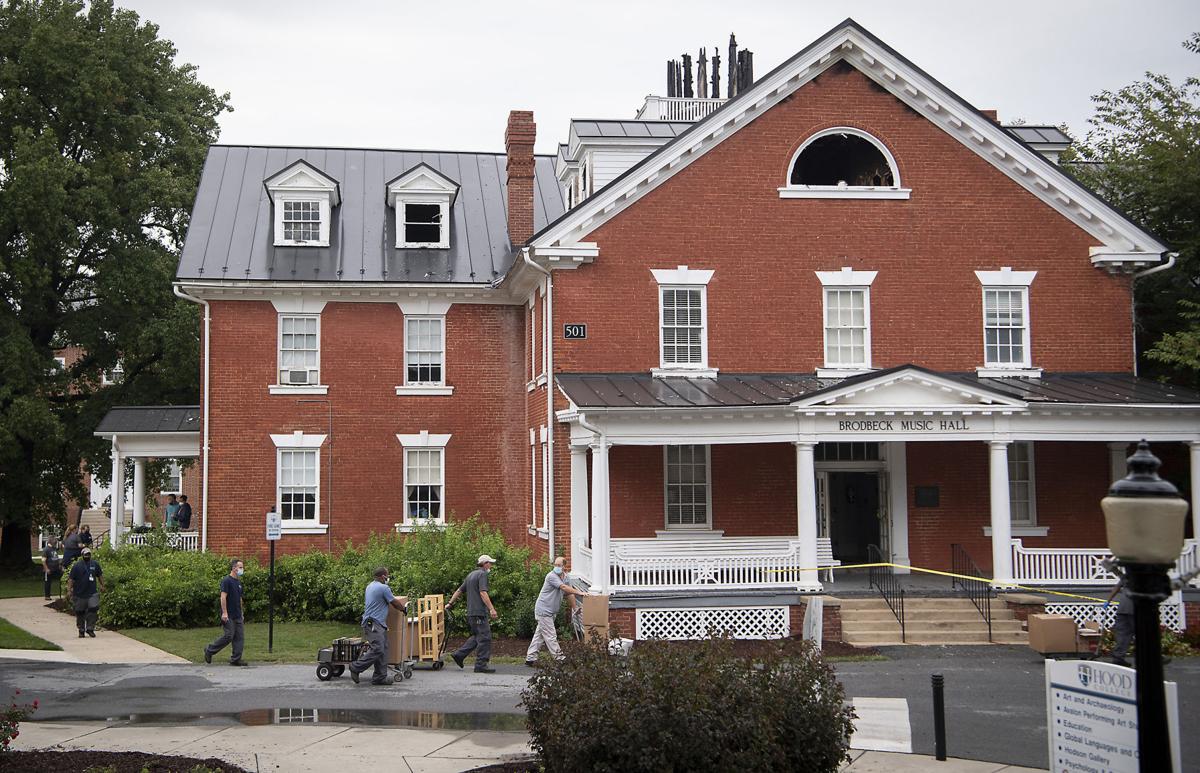 Hood College staff roll away boxes of salvaged materials removed from fire-damaged Brodbeck Music Hall Thursday morning after an early-morning fire ripped through the upper portion of the oldest building on the campus. The fire occurred during a severe lighting storm. 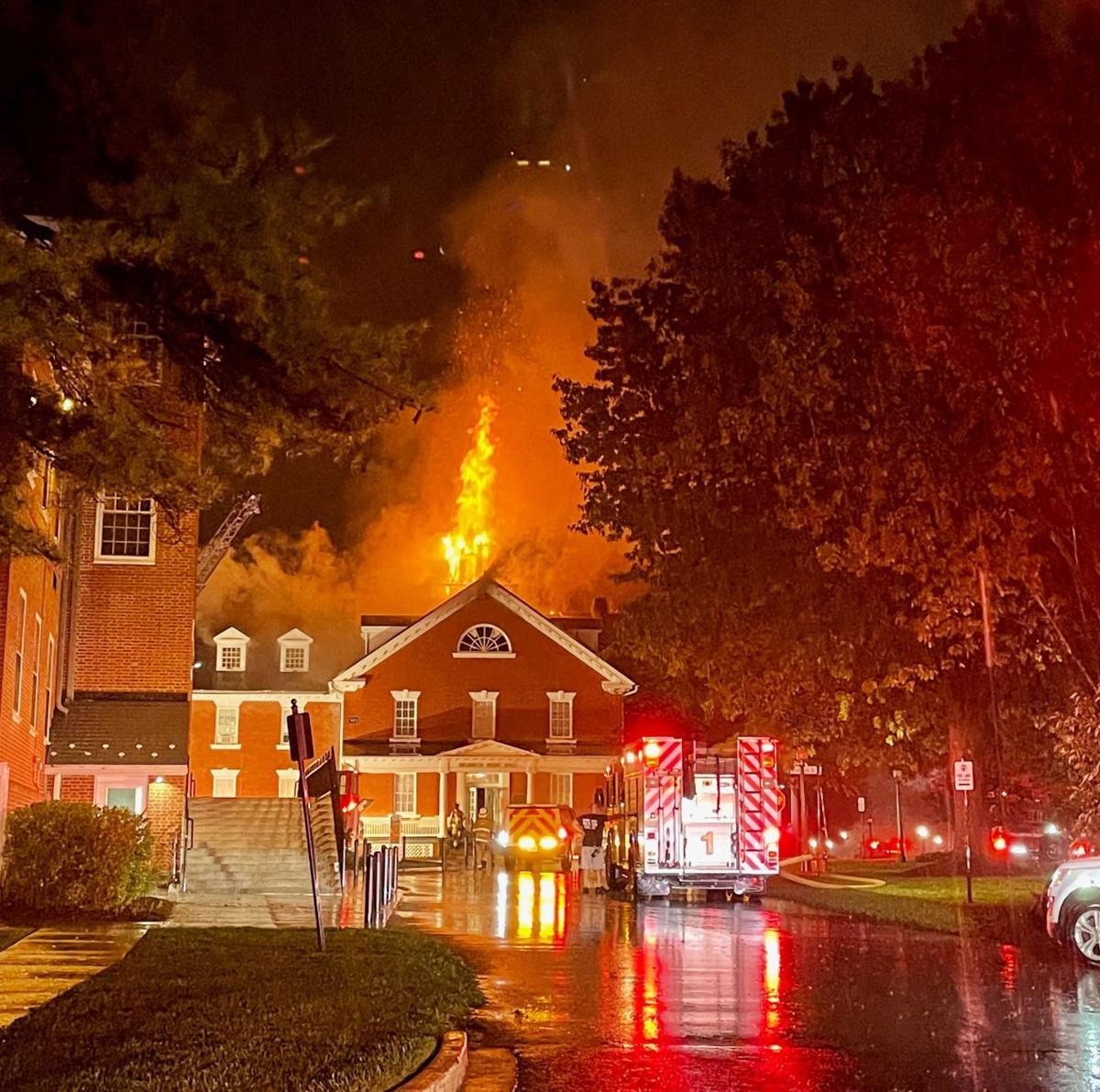 A fire broke out early Sept. 9 at Hood College’s Brodbeck Hall, the oldest building on campus.

Hood College staff roll away boxes of salvaged materials removed from fire-damaged Brodbeck Music Hall Thursday morning after an early-morning fire ripped through the upper portion of the oldest building on the campus. The fire occurred during a severe lighting storm.

A fire broke out early Sept. 9 at Hood College’s Brodbeck Hall, the oldest building on campus.

Though Hood College’s oldest building sustained extensive damage after a fire ripped through it early Thursday morning, the campus president is hopeful a complete restoration will be possible.

Firefighters responded to Brodbeck Music Hall in the 500 block of Brodbeck Drive at about 1:49 a.m. for what became classified as a second-alarm fire, according to Frederick County Division of Fire and Rescue Services.

Roughly 75 firefighters made an “aggressive interior attack” to knock out the blaze in about an hour, a DFRS news release reads. The building was unoccupied at the time of the fire. Personnel stayed on scene another hour to tackle hotspots, perform overhaul and place coverings over the building’s organ, piano and other instruments to prevent water damage. Firefighters and Hood College staff evacuated nearby Smith Hall as a precaution and sent students temporarily to Whitaker Commons, according to DFRS and Hood College.

The cause is under investigation, though campus President Andrea Chapdelaine said lightning was likely the culprit. She said it would be several days before the investigation is complete.

Chapdelaine anticipates the building will be repaired.

“Although it has suffered extensive damage, preliminary reports indicate the structural integrity is intact, so a complete restoration is expected – music will be heard again,” Chapdelaine said in a statement to the News-Post.

Built in 1868, Brodbeck Hall was once a German social club before the college moved from Winchester Hall in 1914, according to Laurie Ward, vice president of marketing and communications for the college.

While music is not the primary major among Hood students, Ward said, students of many disciplines have passed through Brodbeck’s halls over the years, choosing to make it part of their college experience.

The building is listed on the National Register of Historic Places under the Hood College Historic District, where it is partially described as a “Greek Revival/Italianate style cross-gabled building.”

It was also used as a haunted house venue for more than a decade, according to a history book by the staff and volunteers of the Hood College Archives.

But predominantly, it’s been a place of music. Chapdelaine estimates Brodbeck has been home to thousands of recitals, concerts and other college events.

“Brodbeck Hall stood on this land before any form of Hood College existed primarily as a social gathering place for the community,” Chapdelaine told the News-Post.

“It holds a special place in the hearts of so many faculty, staff, students and our alumni,” Chapdelaine added, something that was illustrated through social media comments Thursday. “The outpouring of love and sharing of memories on social media today has been edifying.”

RoseAnn Lester, a violin and viola instructor in the music department, was heartbroken by the fire but expressed gratitude that efforts were made to save the instruments.

“Having taught there for 45 years and performed hundreds of concerts in its concert hall, I have more wonderful memories than can ever be counted,” Lester wrote in an email.

Her late husband, Dr. Noel Lester, was a professor emeritus who developed Hood’s music department from a non-major program into a vibrant training ground for musicians and music educators.

“The two grand pianos on the stage were hand-picked by Noel, and he was so proud of them. Brodbeck was his second home,” Lester wrote. “I dearly hope that the building can be restored. It is such a treasure, and the pride and joy of so many in the Hood family and the Frederick community!”

Fire breaks out in oldest building on Hood College campus

Dozens of firefighters descended upon the Hood College campus in the early hours of Thursday morning when the school’s oldest building caught fire.

I was not surprised by the quick and effective response of the Fire Department. I want to congratulate them for a "job well done." it is nice to know we have that resource in Frederick.