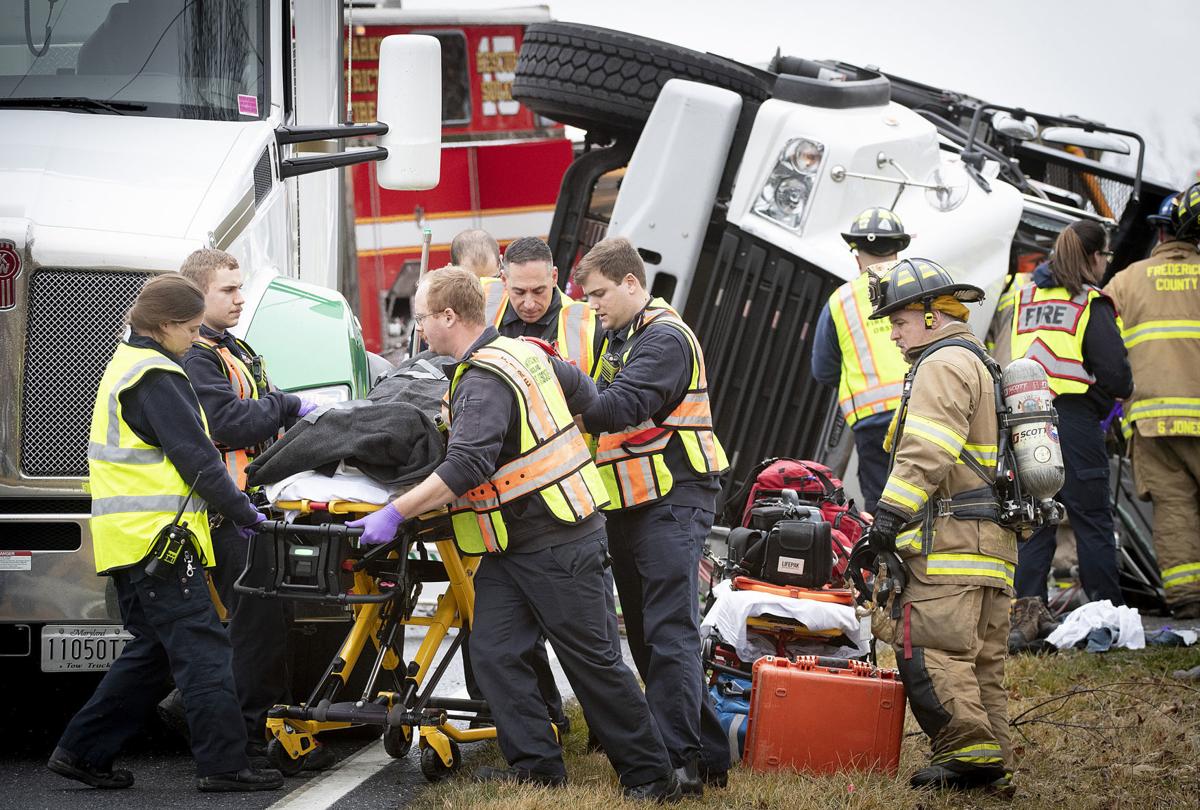 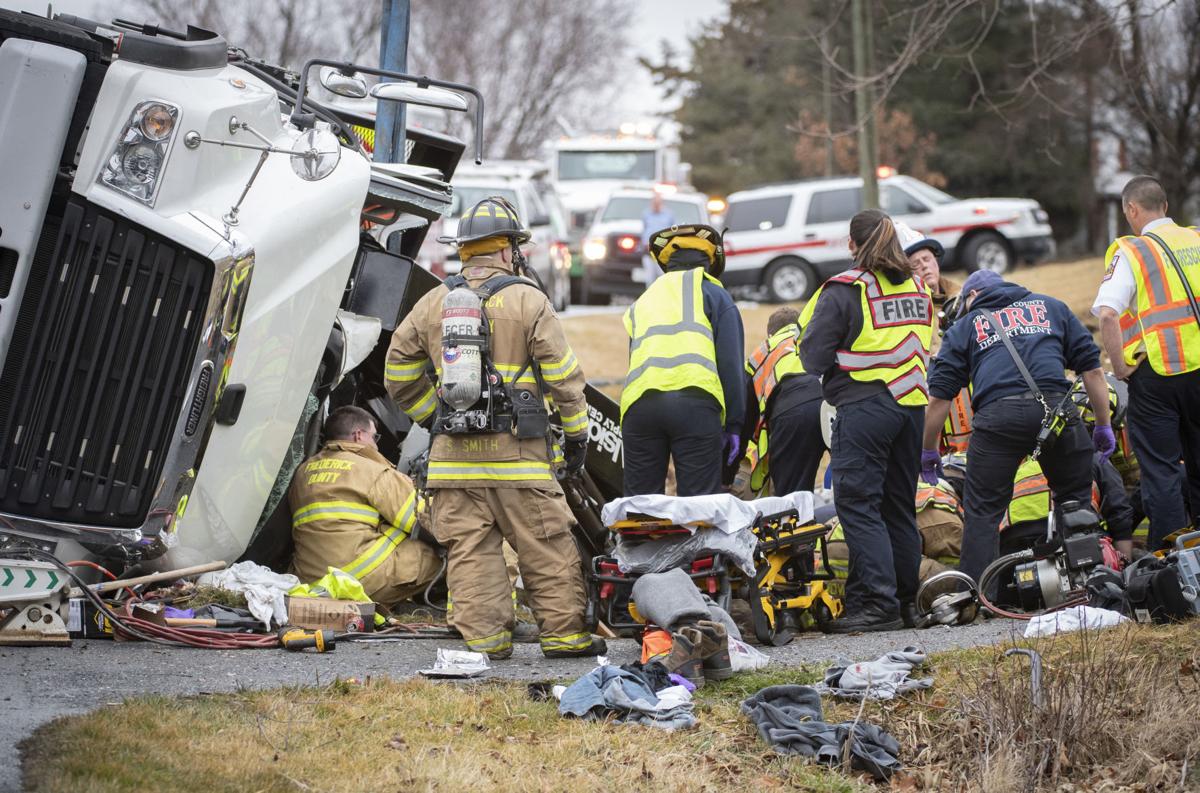 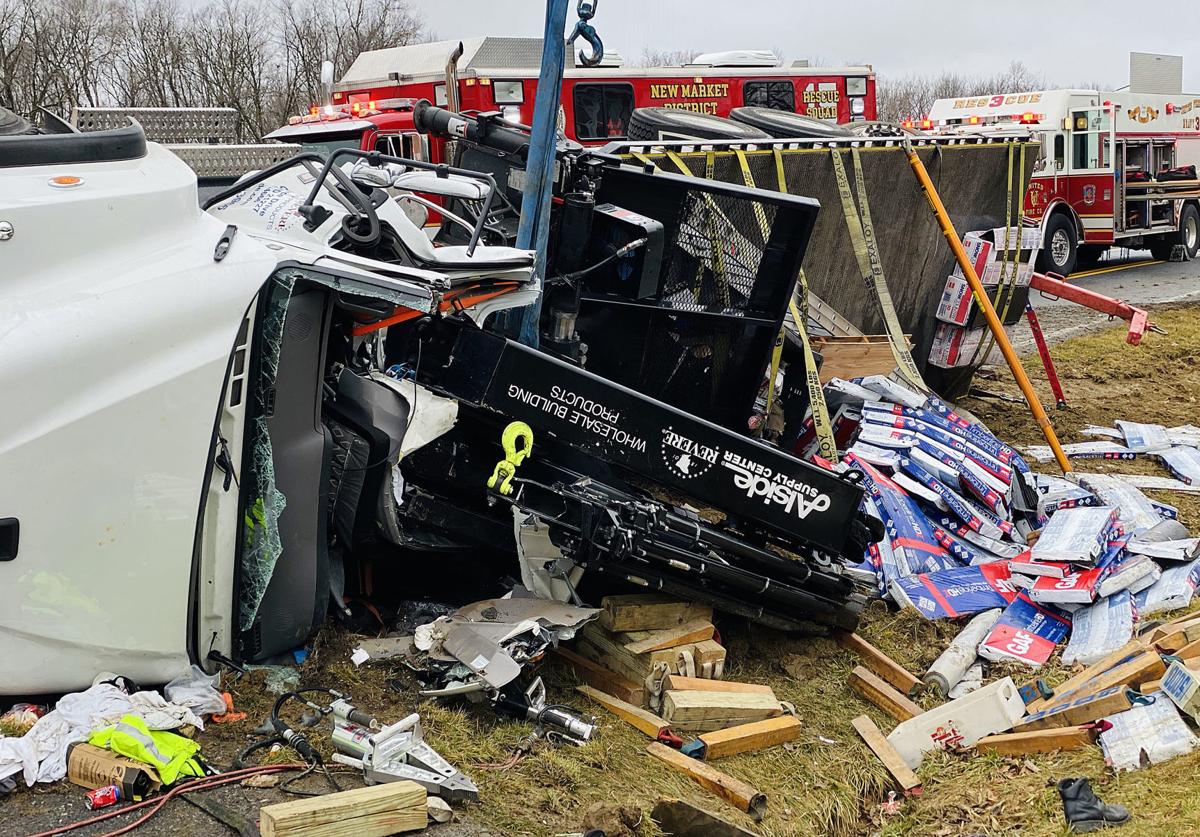 The crash occurred at approximately 11:20 a.m. in the 3600 block of Prices Distillery Road when, for reasons still under investigation, the southbound vehicle veered off the left side of the road, then swerved back to the right and left the opposite side of the road as it overturned, said Deputy 1st Class Nathan Rector, an investigator with the Frederick County Sheriff’s Office’s Traffic Unit. The men were trapped inside the cab when part of the truck’s moving apparatus swung around from behind the cab, Rector said.

“There’s a boom that lifts the roofing materials off of the bed of the truck to either lift them up to a roof or otherwise move them off of the truck, so the boom rotates,” Rector said. “During the crash, it actually rotated all the way around and crashed into the cab, it obliterated the cab, and that’s what [was] pinning them inside.”

The men were removed one at a time over the course of the next hour or so and taken to hospitals in separate ambulances, said Sarah Campbell, a spokeswoman for the Frederick County Division of Fire and Rescue Services. The first two men were taken to Suburban Hospital in Bethesda, and the third man was taken to R Adams Cowley Shock Trauma Center in Baltimore in a GO-Team vehicle sent from the trauma center, Campbell said.

The GO-Team is designed to provide on-scene emergency care and is made up of a physician and certified registered nurse anesthetist. While the trauma center’s website indicates the team is typically sent to transport patients who require advanced pre-hospital resuscitation, Campbell said the vehicle was dispatched once rescue personnel on scene had confirmed that heavy entrapment was involved.

Campbell confirmed that the second and third patients were both alert and conscious when they were removed from the truck, but she was not sure if the first man was, as well.

No other vehicles were involved in the crash, and, while sheriff’s deputies were still investigating what led the truck to overturn, Tony Lapara, who has lived along the stretch of road for about 15 years, said he has his suspicions.

The posted speed limit at Fingerboard Road about a mile north of the scene of the crash was 35 mph.

Please everybody be safe out there!

These guys should have walked away from an overturned vehicle (if indeed low speed) and if belted in. The design of this truck is archaic and the company who designed these trucks should be sued, or the very least, pay all their medical bills lifelong related to this accident. Who can engineer such a truck with mega weight knowing it is unstable and a huge danger when the truck crashes or becomes unstable in some way? It's a time bomb and the workers probably never considered such a danger. Sad and completely preventable. Let's collectively pray for their complete return to health.

Interesting thought, Donnna. Probably they could mount the jack on a hydraulic lift that would raise up when it was needed, Or maybe a folding tower that locks at the joints, when it is unfolded for use. The question would be cost and purchase of equipment that is more expensive.

I was first person there,and it happened in front of my house and it was terrible to this happen to these guys. But they had a tracker and the company said they were not speeding. They were only going 30 mph. I pray that they fully recover.

No one goes 30mph. Its a speedway! On Sundays, the speed bikes do 60mph pluse and wheelies. I almost got hit a week ago checking my mail. Speeders love the straight away.

Last year my maibox was taking out! There were tracks in my lawn and pieces of side mirror. Again speed. Prices Distillery is being used as a bypass from Ijamsville to Rte 75.

And your mailbox last year proves that this truck was speeding.....how?