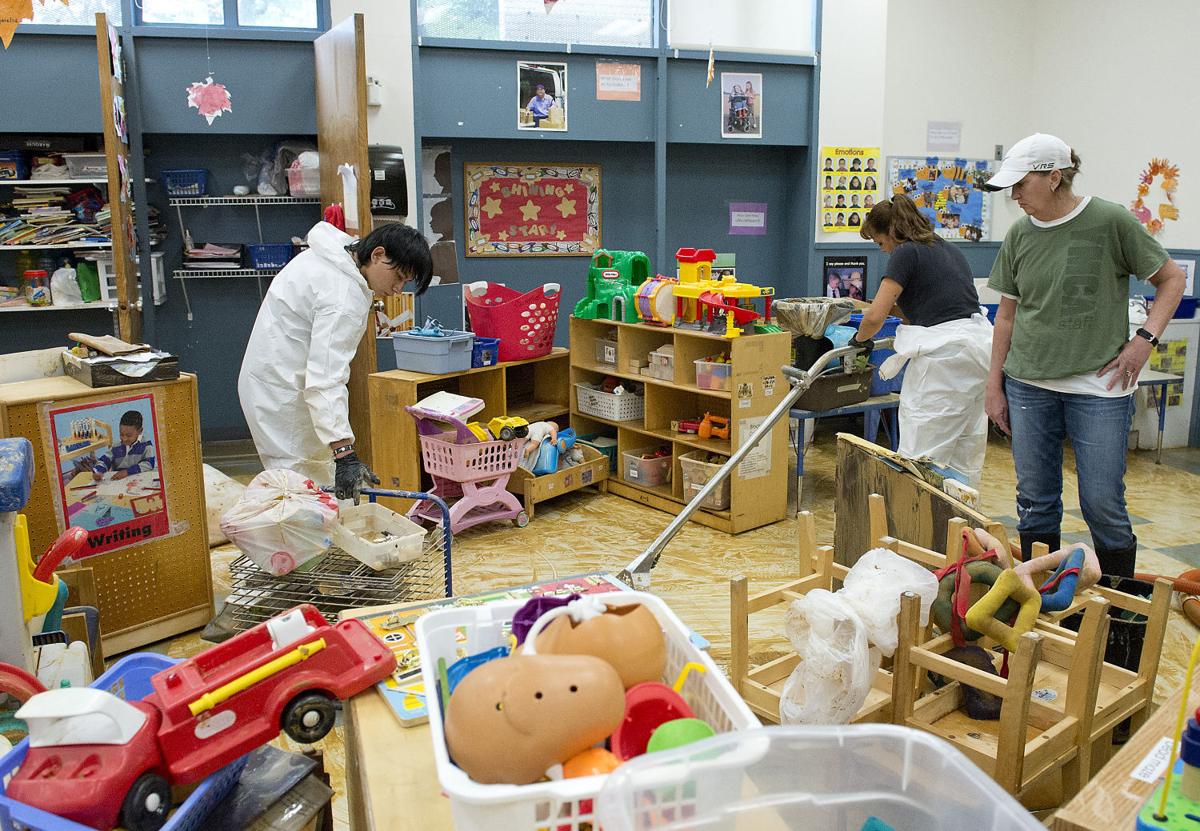 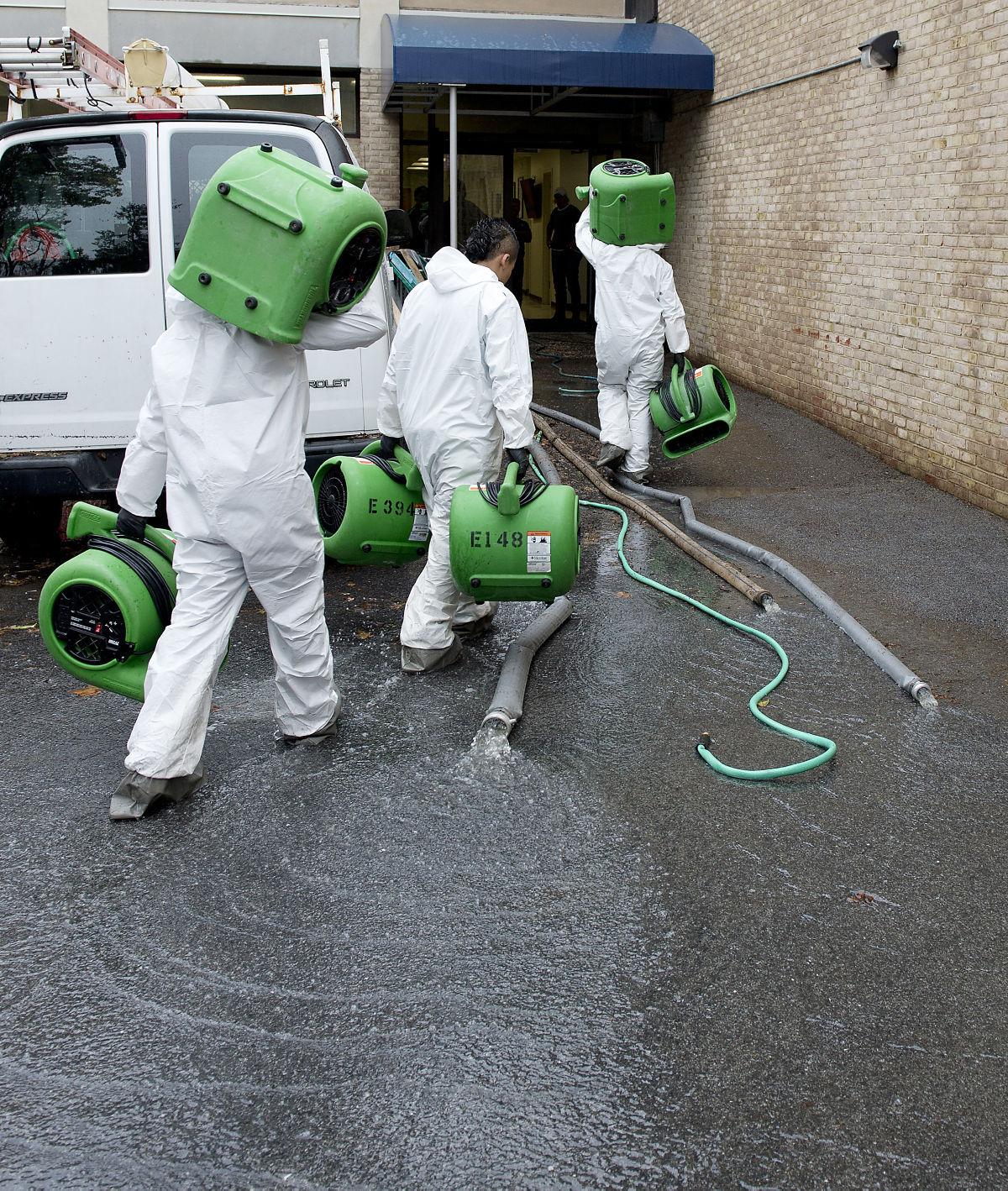 Workers carry fans into the YMCA off North Market Street to dry out the basement and classroom area of the center that sustained heavy damage during Tuesday night’s rain. 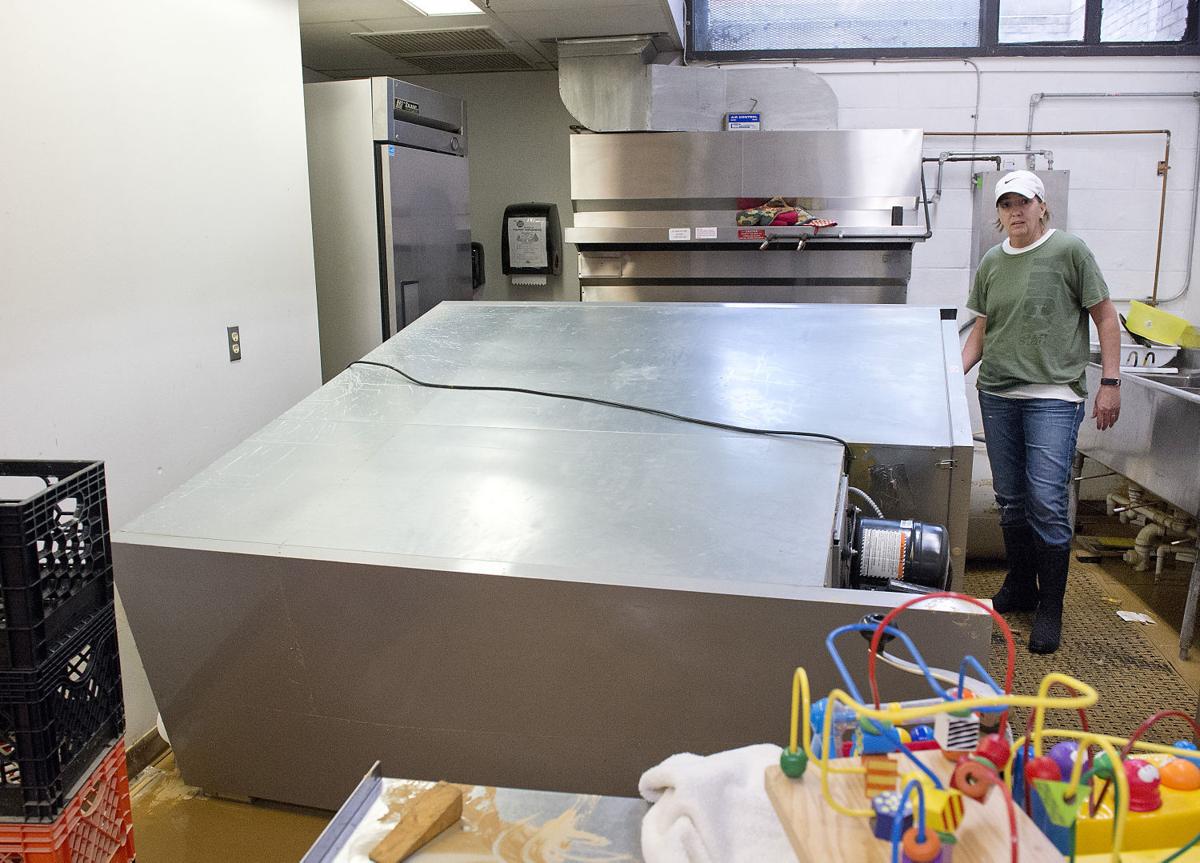 After severe flooding a year ago, YMCA CEO Chris Colville surveyed damage to a kitchen area where a commercial refrigerator was overturned by flood water. 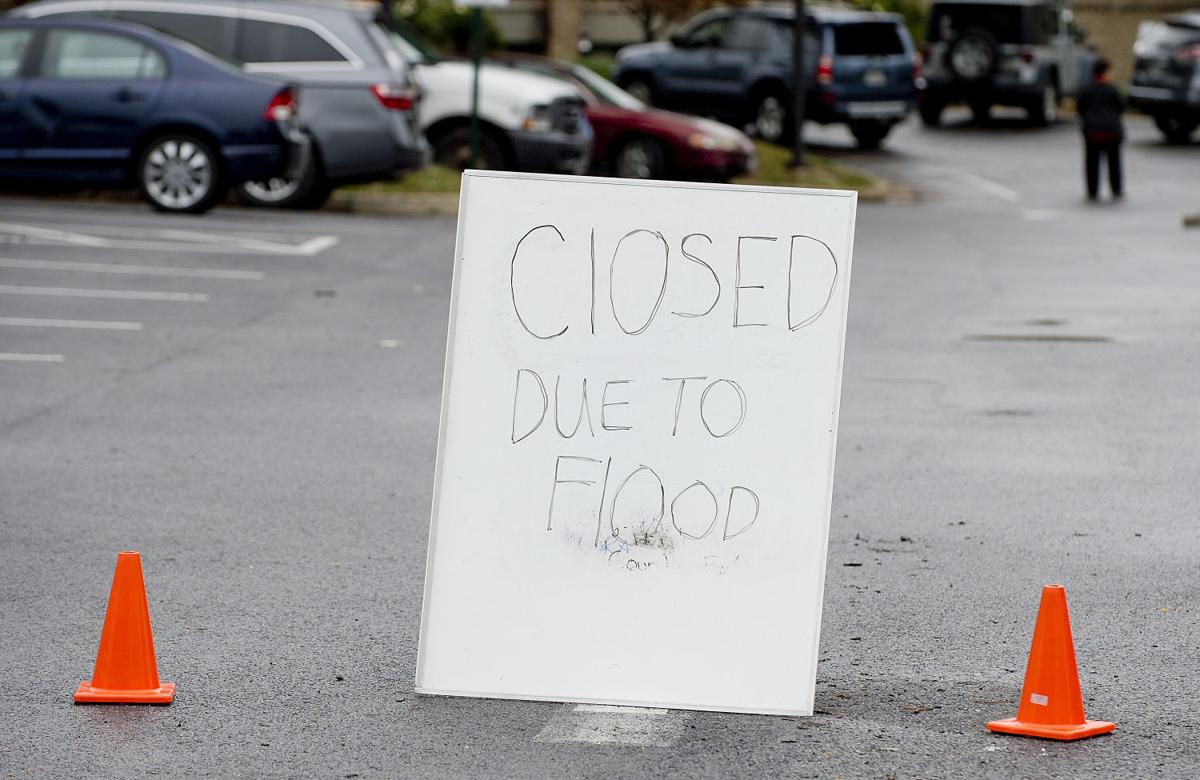 The YMCA off North Market Street is closed due to severe flood damage following Tuesday night’s heavy rain. Many of the basement classrooms at the center were heavily damaged.

Workers carry fans into the YMCA off North Market Street to dry out the basement and classroom area of the center that sustained heavy damage during Tuesday night’s rain.

After severe flooding a year ago, YMCA CEO Chris Colville surveyed damage to a kitchen area where a commercial refrigerator was overturned by flood water.

The YMCA off North Market Street is closed due to severe flood damage following Tuesday night’s heavy rain. Many of the basement classrooms at the center were heavily damaged.

When Chris Colville stepped out of the flooded YMCA early Wednesday into the center’s parking lot, she was surprised to find a lake, complete with fish.

“There’s a man who lives down the street who has a koi pond in his backyard, and the water had risen so high that his koi fish were floating around in our parking lot,” Colville said, shaking her head. “We managed to scoop up some of them. … I think we saved most of them.”

More than 5 inches of rain fell on Frederick over just a few hours Tuesday night, flooding streets, house basements, businesses and the city’s overworked drainage and sewer system. City police responded to 41 weather-related calls for service between 8:46 p.m. Tuesday and 12:19 a.m. Wednesday, according to Lt. Clark Pennington, including a partial roof collapse in the 400 block of Aviation Way and several calls for vehicles stuck in high water.

The police department was not immune to weather-related trouble, either. One of the department’s brand new cruisers, an unmarked 2015 Ford Interceptor, was damaged when the city’s garage began to flood, and much of the department’s Criminal Investigations Division also sustained water damage, Pennington said.

“They called me last night and said, ‘We’ve moved all the stuff off of your bottom bookshelf, but there’s water all over the floor,’” Pennington said. “It has happened before; when we get major rains, those pipes get clogged, and there’s nowhere else for the water to go.”

The Weinberg Center for the Arts found itself bailing out several feet of rainwater and debris from the rear of the theater Wednesday morning, said Executive Theater Manager John Healey. So much water had built up in the stairway behind the theater that a solid steel door was bent almost in half where the water gushed in.

“This place was just full of garbage; trash, bottles, anything that was in the street came in here,” he said, gesturing down a hallway that, just a hours before, had up to 4 feet of water in it. “It came down those steps like a waterfall.”

Many residents blamed debris for the extensive flooding, citing leaves and other trash that prevented rainwater from draining into the sewers. Zach Kershner, director of the city’s Department of Public Works, agreed.

“Storm drain inlets are susceptible to blockage from leaves falling this time of year,” Kershner wrote in an email response to The Frederick News-Post‘s questions. “Our DPW staff is working diligently to keep those inlets clear from debris. Residents can assist if they notice an inlet clogged near their house or business.”

While Kershner’s warning came a little late for Tuesday’s sudden deluge, the potential for more rain was on the way as newly-named Hurricane Joaquin moved toward the East Coast. While Joaquin was initially projected to stay out at sea, experts now believe it will make landfall by this weekend.

The current track has Joaquin heading up into the Chesapeake Bay beginning Sunday into Monday, which would be bad news for the already saturated grounds of Maryland, said Andy Woodcock, a meteorologist with the National Weather Service in Sterling, Virginia.

“That was an amazing storm [Tuesday] night, and the thing is, it has sort of primed the ground … with what happened yesterday, there’s going to be very little absorption in the ground, and that’s going to be a problem,” Woodcock said. “I’ve been here a long time, and this one has the potential to be a top 10 for me.”

For residents like Raimi Kellner, Wednesday’s rude awakening was more than enough flooding to last a lifetime.

“When I stepped outside, I won’t repeat what I said, but the water had covered my garden. It was awful. You literally could have kayaked,” she said, pointing out the water level by stains left on the shed behind her house. “I opened my basement door this morning and took one look and said, ‘I can’t deal with this right now.’”

Even Kellner’s next-door neighbors, Mark and Sally Rice, who used a sump pump to manage the flooding in their basement, were shaken by the experience. The couple spent most of the night, until about 3 a.m., running the pump into the laundry sink, which was itself full because of the backed-up drainage lines.

“We couldn’t keep the water out, but we could at least keep it from going up,” Mark said. “ ... We were as prepared as we could be, but from a downpour perspective, I don’t recall anything like it.”

But later in the night, after the ground was saturated, water began bubbling up from the couple’s cement floor.

The YMCA was still one of the hardest hit by flooding, the entire basement was full, with up to 10 feet of water, while subsequent levels moving toward the front of the building had 4 feet, and up to 2 feet when employees and volunteers arrived just before midnight, Colville said.

A damage estimate wasn’t available Wedneday evening, but Colville said she expects the center will remain closed until at least next week — some areas of the building even longer.

“Our biggest need is trying to find temporary space to relocate our licensed childcare program, which typically serves 90 students,” she said. “We’re just now starting to get the word out, so no responses yet. We’ll have to see.”

Back at the Weinberg, Healey’s perspective was a bit brighter. In spite of the damage, he does not expect the theater’s season-opener planned event, a 7:30 p.m. pay-what-you want performance by Gedeon Luke and the People, will be affected.

“The show must go on,” Healey said with a smile.

The American Red Cross warned residents to be prepared for potential flooding well ahead of storms and heavy rain. Check the organization's website for a comprehensive list, but for a quick review:

n First aid kit and medications for up to seven days

n Ensure your home or renter's insurance covers flood or similar damage, such as from storms or hurricanes

In the event of a flood, the Red Cross recommends the following:

n Be ready to evacuate quickly to higher ground

n Avoid all flowing water, even as shallow as ankle-depth. Never try to ford a flooded roadway in a vehicle

n Return home only after officials have declared it safe

For a complete list of tips, advice and kit recommendations, visit the American Red Cross's flood preparedness website and database at www.redcross.org/prepare/disaster/flood.

Major flooding strikes the county in September, causing significant damage to YMCA of Frederick County as well as area businesses and homes.

Frederick County is bailing out from this week’s deluge of rain and preparing for the next one, as well as its aftereffects.

Have you covered the retaining walls over on industry lane and Extra Space Storage that was flooded because they burst?