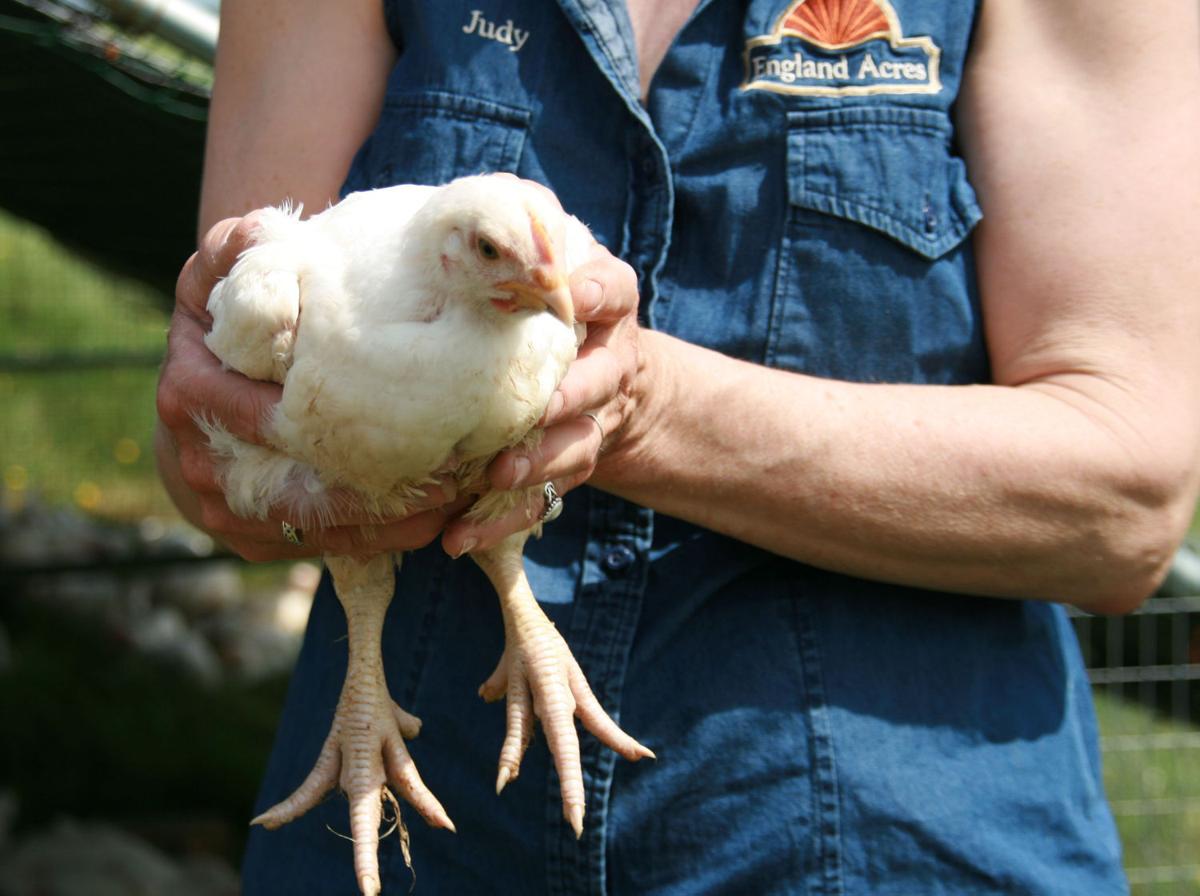 Judy England, from England Acres Farm and Market in Mount Airy, displays a broiler chicken that she has raised. England said growing her chickens outside ensures the animals have plenty of sunshine and fresh air, so they rarely get sick. 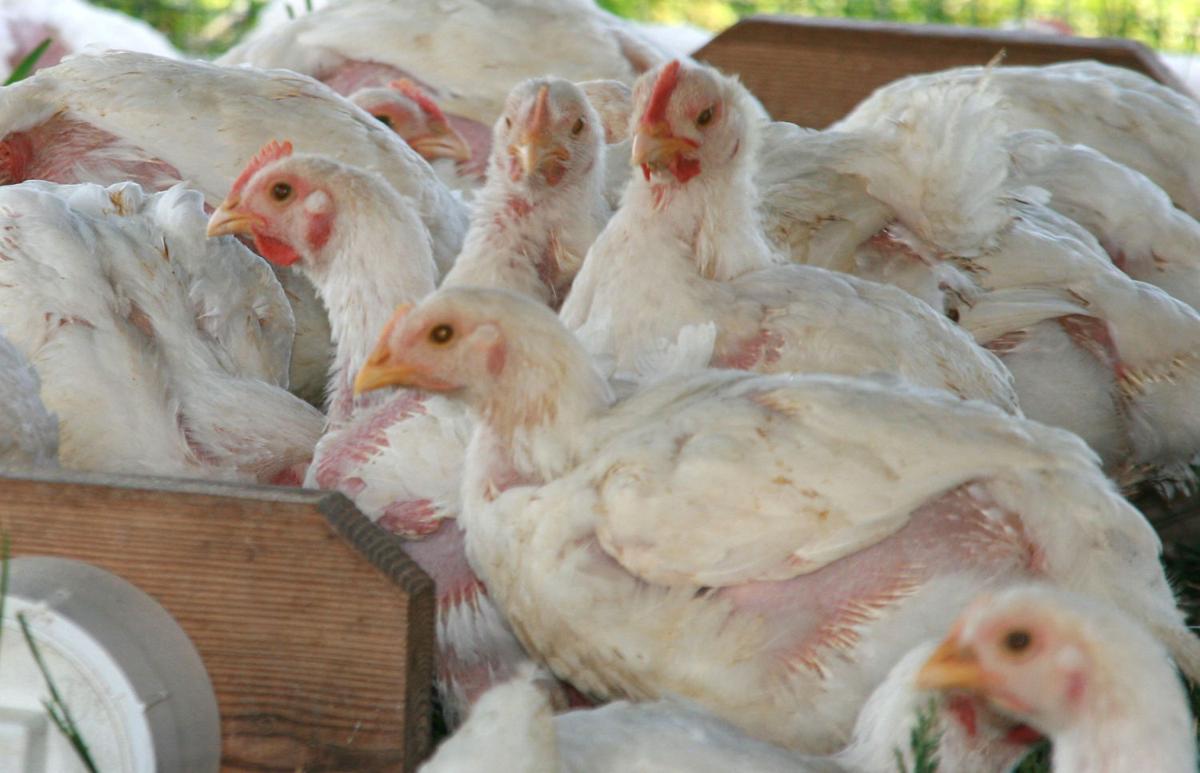 Broiler chickens at England Acres Farm and Market await their lunchtime feeding. Judy England, owner of the farm, says she uses natural remedies if the chickens get sick.

Judy England, from England Acres Farm and Market in Mount Airy, displays a broiler chicken that she has raised. England said growing her chickens outside ensures the animals have plenty of sunshine and fresh air, so they rarely get sick.

Broiler chickens at England Acres Farm and Market await their lunchtime feeding. Judy England, owner of the farm, says she uses natural remedies if the chickens get sick.

Joel Horst knows more about the chicken he eats than most other diners. With one bite, he can tell whether the bird on his plate has been fed a conventional diet or an organic one.

“The meat just has flavor,” the 26-years-old said of organically raised chickens.

The U.S. Department of Agriculture and some major healthy food advocates say the meat is also better for you because it is free of antibiotics and other drugs. Some studies have shown that eating poultry and livestock infused with antibiotics can cause people to become resistant to those antibiotics.

Horst has worked for 15 years on his parents’ poultry farm, Jehovah-Jireh, in Dickerson. Myron and Cathy Horst say they have raised their chickens on a pasture and fed them a diet of fresh grain that contains no hormones or antibiotics since 2000.

Carpenter-turned-farmer Myron Horst said raising his chickens outside in fresh air and sunshine keeps the animals healthy and eliminates any use of antibiotics.

The issue of antibiotic use in the poultry and livestock industry has gained the attention not only of the USDA, but of groups such as School Food FOCUS, which tries to leverage the purchasing power of school districts to make school meals more healthful. School Food FOCUS and Pew Charitable Trust unveiled the Certified Responsible Antibiotics Use standard last week in a bid to minimize the exposure to drug-resistant bacteria, especially for children.

The voluntary standard will give poultry producers a way to demonstrate they have avoided unnecessary use of antibiotics in chicken products.

The standard developed by the Pew Charitable Trust and FOCUS is the first USDA-certified standard “that allows for minimal use of medically important antibiotics in poultry production — but only with veterinary oversight. Poultry companies interested in meeting CRAU must undergo regular USDA audits to verify compliance,” according to Pew.

Robert Kelly, senior manager of food nutrition services at Frederick County Public Schools, said he supports the purpose of the Certified Responsible Antibiotics Use standard. But he said other factors, such as the quality of the product, the attraction of the product for students, and the product’s adherence to “set guidelines” all drive purchasing decisions at the school district.

“Chicken is one of our most popular menu items. We only purchase products from producers that are approved by the USDA,” Kelly said in an email.

Kathy Lawrence, director of strategic development at School Food FOCUS, said the idea came from school districts that wanted to leverage their purchasing power to be able to offer healthier meals to students.

“The Certified Responsible Antibiotics Use standard was created in response to demand for more sustainably produced school food,” said Lawrence. “This is a market-driven, grassroots solution to a critical public health challenge, and demonstrates the leadership school districts can exert as institutional buyer.”

Meat producers would have to undergo an audit by the U.S. Department of Agriculture in order to get certified as using “medically important” antibiotics judiciously. Furthermore, poultry producers would be expected to administer antibiotics to treat their animals under only the oversight of veterinarians – and not as growth enhancers.

“This new standard will guide producers who want to use antibiotics in the most limited way possible in order to protect animal health, reduce overall antibiotic use, and slow the growth of superbugs that threaten human health worldwide,” said Gail Hansen, senior officer for the antibiotic resistance project at the Pew Charitable Trusts.

Antibiotics, while helpful in combatting diseases, spur the growth of drug-resistant bacteria in food animals. Humans eating meat can pick up the bacteria from infected animals, according to the Centers for Disease Control and Prevention.

In medical lingo, drug resistant bacteria are referred to as “superbugs.” The concern is that bacteria, fungi and parasites could all become resistant to drugs. Patients infected with antibiotic resistant bacteria often see a relapse of their disease and are forced to spend longer time in hospitals. Superbugs also worsen the side effects of a disease.

As bacteria develop resistance to antibiotics, they can multiply or pass on the resistance qualities.

According to the CDC, 2 million Americans fall ill due to drug-resistant diseases every year, and 23,000 die. Though this is not necessarily due to eating food from animals with antibiotics, such drugs are commonly used on animals to control diseases and gain weight.

In March, the Obama administration released a National Action Plan for Combating Antibiotics Resistance Bacteria that says “the judicious use of antibiotics in health care and agricultural settings is essential” in fighting the rise in antibiotic resistance. In his 2016 budget proposal, President Barack Obama proposed doubling the fund set aside to battle antibiotic resistance to more than $1.2 billion.

Some have argued that the low dosage of antibiotics that animal producers use to enhance growth is not significant enough to damage human health.

But the World Health Organization, American Medical Association and American Public Health Association support curbing antibiotic uses in food animals. Antibiotic resistance can make infectious diseases more difficult to cure and pose a threat to the health of people with weak immune systems, such as the elderly and children.

A majority of the antibiotics in use in the United States are used in animals. In 2011, the U.S. Food and Drug Administration estimated that 70 percent of medically significant antibiotics were used in the food-producing animals to promote growth and treat diseases.

Colby Ferguson, government relations director at the Maryland Bureau of Agriculture, said antibiotics and other medicines are essential for farmers treating sick animals.

“One thing you can’t do is, you can’t sit there and have a sick animal and say, ‘Because I want to sell it to Chipotle, I’m going to let it die, or hope that it lives through the sickness,’” said Ferguson, “because I can’t give it a shot, or a medicine that it needs.”

Ferguson, in a phone interview, said that antibiotic-free is the direction that the livestock industry has been going for a while.

In 2013, the FDA approved a voluntary standard to “phase out the use of certain antibiotics for enhanced food production.” The standard calls on animal pharmaceutical companies to remove growth enhancement indicators on their products. Like the Certified Responsible Antibiotic Use standard, the FDA guideline also asks meat producers to use antibiotics under the supervision of a licensed veterinarian.

Tyson Foods Inc., a large American producer of chicken, pork and beef, became the first company to adopt the new standard. The Springdale, Arkansas-based meat processor said it completed an audit at a plant in New Holland, Pennsylvania, on April 7. The USDA verified that its practice is in line with the new guideline, the company said.

Julie DeYoung, a spokeswoman for Perdue Farms, said in an email that the meatpacker has no plan to utilize the Certified Responsible Antibiotic Use standard at this point. But the Salisbury-based company already meets the School Food FOCUS criteria.

“We stopped using antibiotics for growth promotion in 2007, and followed it with antibiotics removal from all hatcheries in March 2014,” DeYoung wrote.

Plans to get certified

At the Jehovah-Jireh farm, Myron Horst already markets his products as organic, but says he plans to get certified by the USDA.

“It might be something beneficial for us, because we don’t use antibiotics,” he said of the new standard. “I don’t know how that works. If we are certified organic, there’s a given that there’s no antibiotics.”

The Horsts’ sell their products to health food and organic stores, such as Mom’s Organic Markets in Maryland and Virginia. Other buyers include the Common Market in Frederick and TPSS Co-op in Takoma Park.

“There are people who want antibiotic free,” said Cathy Horst. “We are niche as a health food market. That’s how we are competitive.”

Julie Oberg, communication director at the Maryland Department of Agriculture, said in an email that “it is our understanding that many of the Maryland poultry companies are already implementing policies that only use antimicrobials for treatment and prevention of disease and not for growth promotion.”

In Mount Airy, Judy England of England Acres Farm and Market, said she wouldn’t oppose getting the certification if it doesn’t involve added fees or too much paperwork.

“I have nothing to hide and I don’t use it [antibiotics],” she said.

Like Jehovah-Jireh, England Acres produces pasture-raised chickens that spend their days roaming about the farm’s grass field. England said her products don’t carry any certification right now because her customers know they are organic.

“It will just be an emblem that I can put on my door, if that’s what the consumers are connecting with, so that the newcomers coming in will see that new emblem,” England said. “If they are connected with it, they will automatically know, so they don’t have to ask me the question: Do I use any antibiotics or hormones?”

Certified Responsible Antibiotic Use from Medill Washington on Vimeo.

How often do you eat organically-raised meats?

Btw...I stand corrected. I didn't read it that way earlier :-) Thanks for treating me nicer than I was earlier.

Joel Horst, you are a crock of BS, you can't tell the difference between organic and non-organic chicken. What are we doing using all of the fancy detectors for the detection of antibiotics and chemicals, just give it to Joel Horst he can determine the presence of chemicals with one bite...you willing to back up your claim with a blind taste test. These baseless claims are what I can't believe that newspapers report.