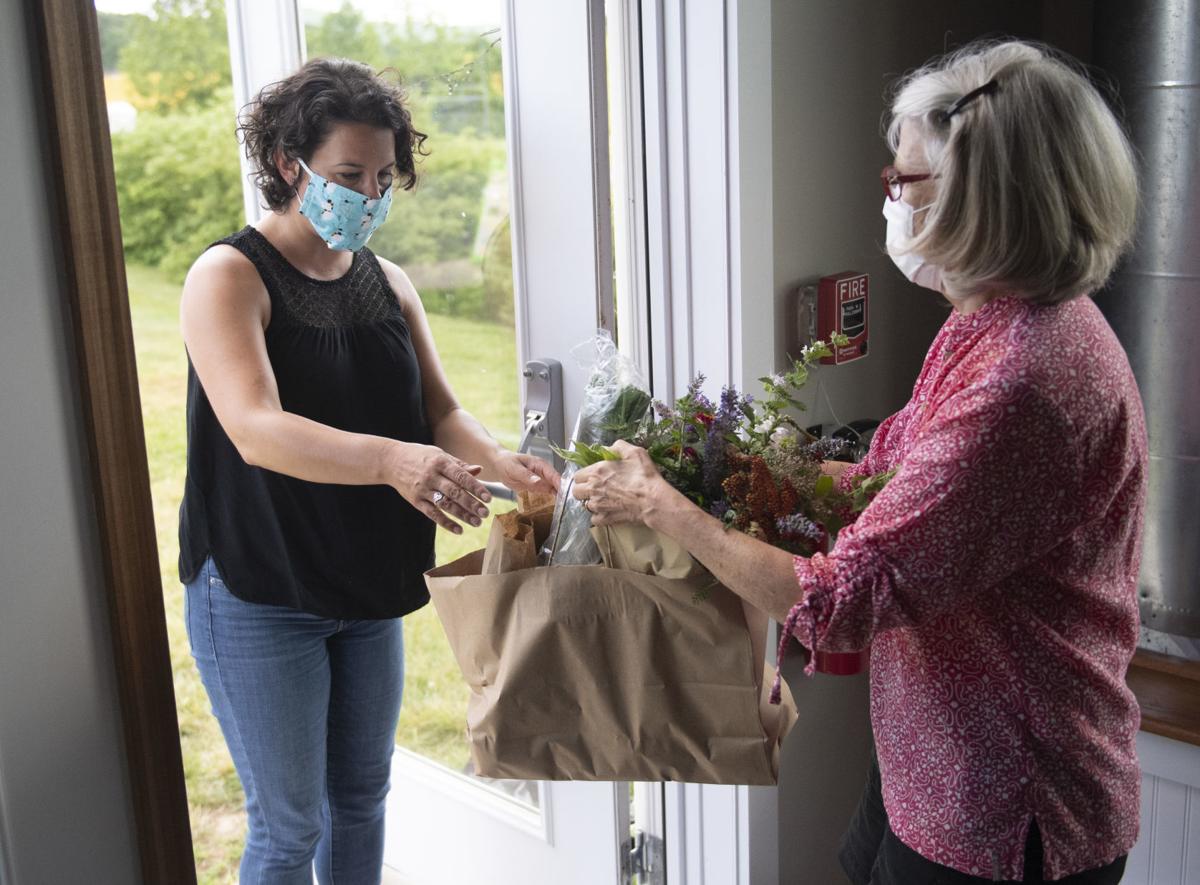 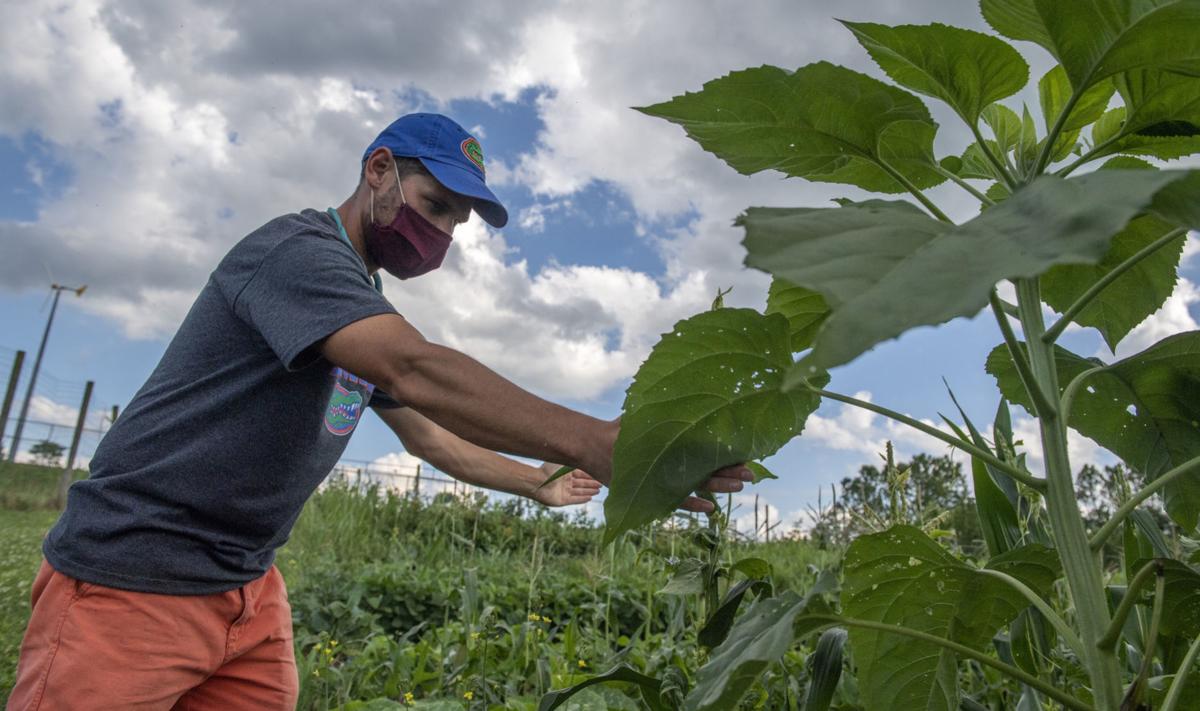 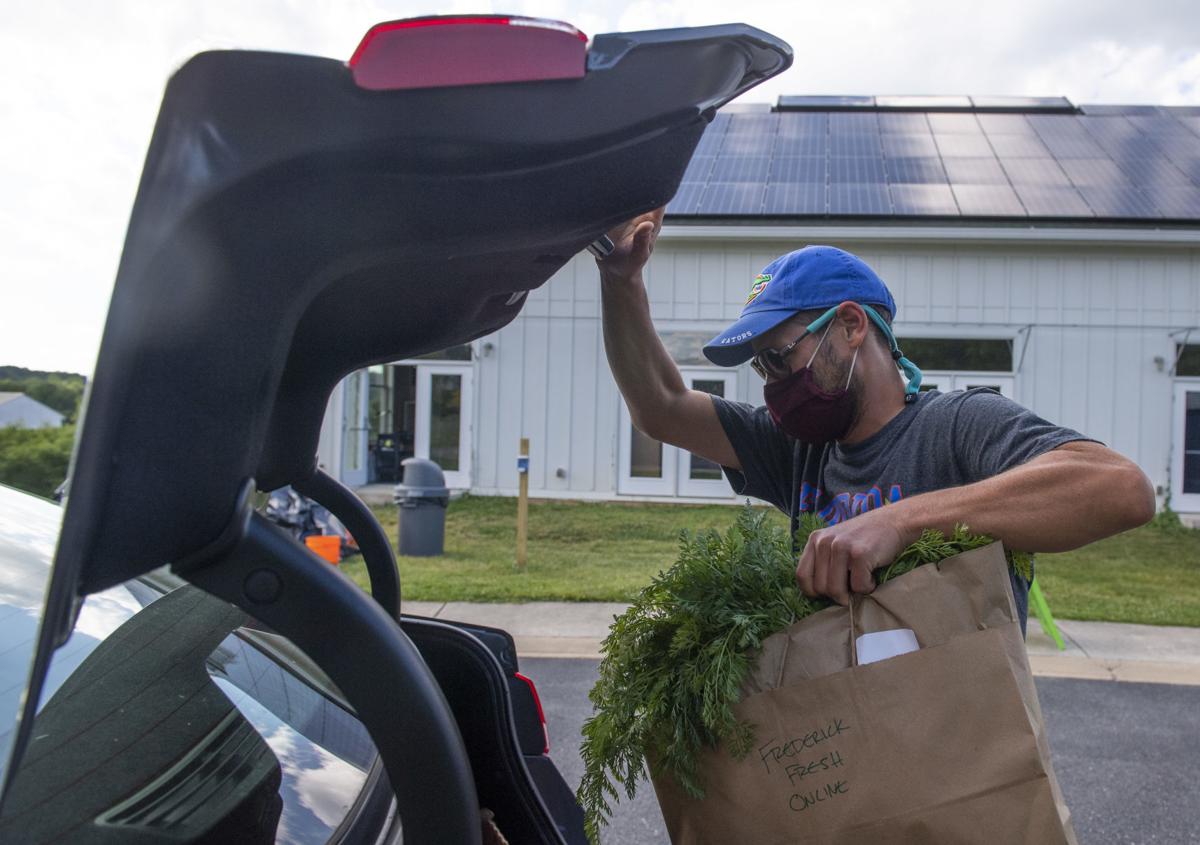 Nick Miller, farmer and director of agriculture education for Bar-T Mountainside, loads a package of produce into a customer’s car Wednesday afternoon. 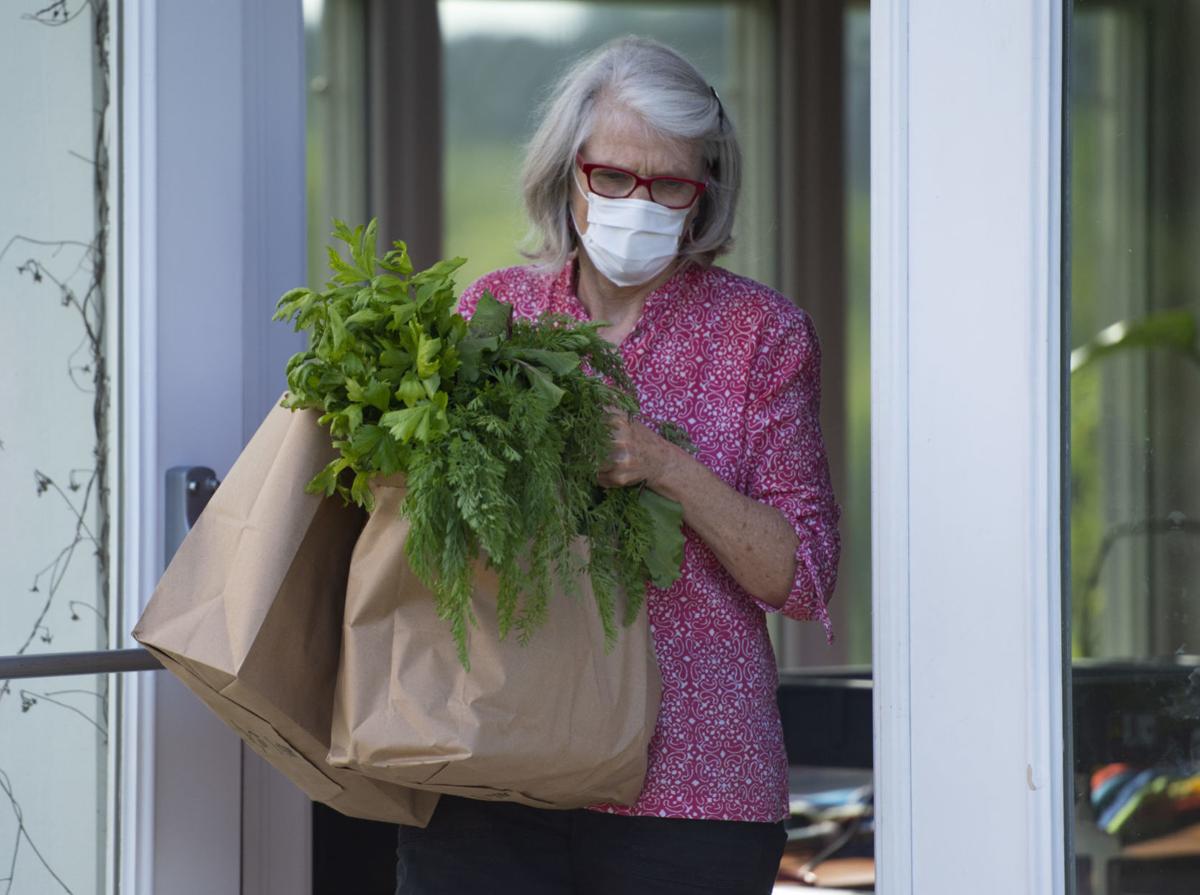 Nick Miller, farmer and director of agriculture education for Bar-T Mountainside, loads a package of produce into a customer’s car Wednesday afternoon.

Frederick Fresh Online is essentially an aggregated online farmers market. Registered shoppers go online every week and pick out the produce and other food products they want from six different local farms. Customers pay online and pick up their items once a week at Bar-T Mountainside.

The weekly marketplace is open from Thursday through Sunday, and pick-up is on Wednesdays. Volunteers organize the purchased items for each customer once the items arrive on-site and bring it out to a customer’s cars when they arrive.

Frederick Fresh Online has now been running for three weeks, and there are 75 registered shoppers.

Duke found out about the marketplace through Facebook. She likes that it provides a safe shopping experience and supports local farmers.

“It’s basically almost like a touch-free delivery service...and you’re supporting the local farmers who are the ones you want to support. You want them to survive through this economic downturn,” Duke said.

Melanie Smith-Bell, outreach manager for Community FARE, said the organization had been toying with the idea of an online farmers market before the COVID-19 pandemic hit. When the state started shutting down, staff knew people would be looking for alternative ways to get fresh produce, especially since regular grocery stores began running out of certain items.

“It was hard in that the whole grocery experience became a stressful experience. You were limited to where you could go and where you could get your food and there was always the question mark of will the food be available when you get there,” she said.

However, there was a challenge at the beginning, Smith-Bell said, with trying to get people and producers on to the site.

“People had already been interacting directly with some of the farmers because they weren’t finding what they wanted in the stores...and many of the farmers didn’t have a need to find customers because they were selling out of their products,” Smith-Bell said. “But we did locate farmers that also had more growing capacity or some of them are new to farming, or the area, and willing to give this a try.”

All of the farms are located within Frederick County and Smith-Bell said she hopes more producers join the site and begin selling.

Farmers are allowed to set their own prices and receive 100 percent of the profits. Customers must also pay a $3 servicing fee which covers materials that are used to organize items once they are dropped off and cleaning supplies, Smith-Bell said.

Nick Miller runs Mountainside Grows, which is located on the property of Bar-T Mountainside. Normally, the farm runs a summer camp with about 40 kids spending time on the farm each week. Due to COVID-19 restrictions, the camp is unable to have as many participants this summer, and therefore there is an abundance of produce.

That extra produce is now being sold through Frederick Fresh Online. Miller said they are offering a lot of kid-friendly produce including sweet corn, tomatoes, sweet peppers, cucumbers and berries.

Duke said the fact that farmers are picking directly for shoppers and minimizing waste was also a big appeal for her.

“You select what you want and they pick what you want. It’s not like they have to pick a whole bunch of stuff and bring it to a farmers market and then have all that go to waste. They're picking only what’s needed,” Duke said.

Donna West has been using Frederick Fresh Online for two weeks and said everything she has purchased so far has been fresh and delicious.

She and her husband, Jeff, eat a vegetable-heavy diet and said they like the variety of vegetables they are able to find through the marketplace. The red kale, in particular, which she purchased recently, was a favorite.

“It was a huge bunch of the most freshest, crispest kale and the difference in the taste, you could taste it when you cooked it, it was a sweetness,” West said. “It was so absolutely delicious, so we said this is going to be a weekly thing.”

Miller said he is happy with the demand he has seen so far but hopes to see it grow.

“Now that the local economy is struggling in new, different ways...creating other outlets and finding ways that customers can continue to support those producers is really important,” Miller said.

Smith-Bell said Community FARE and FCFC is hoping to expand the operation to include more farms and pick-up locations.

“It provides a safe shopping experience, it provides an opportunity for people to reconsider how we get our food,” Smith-Bell said. “The community is more secure if we have growers who feel confident that they can grow food here and find somebody who is interested in purchasing it.”

Miller said that buying local food is just as important now as before.

“Buying local food is always nice, it’s a connection to the local community, it’s a benefit to small-holder farms...buying local helps to support them and helps to diversify our farming landscape,” he said.

For more information and to register as a customer for Frederick Fresh Online visit frederickfreshonline.luluslocalfood.com.

Online shopping opens at 8 a.m. on Thursdays and closes at 12 p.m. on Sundays.

There is a $3 site delivery and packing fee for every order.

Pick-up of orders is on Wednesdays from 5 p.m. to 7 p.m. at Bar-T Mountainside Summer Camp located at 2914 Roderick Road, Urbana.

They need to add a drive through where customers can see all of the various produce and make their selections.