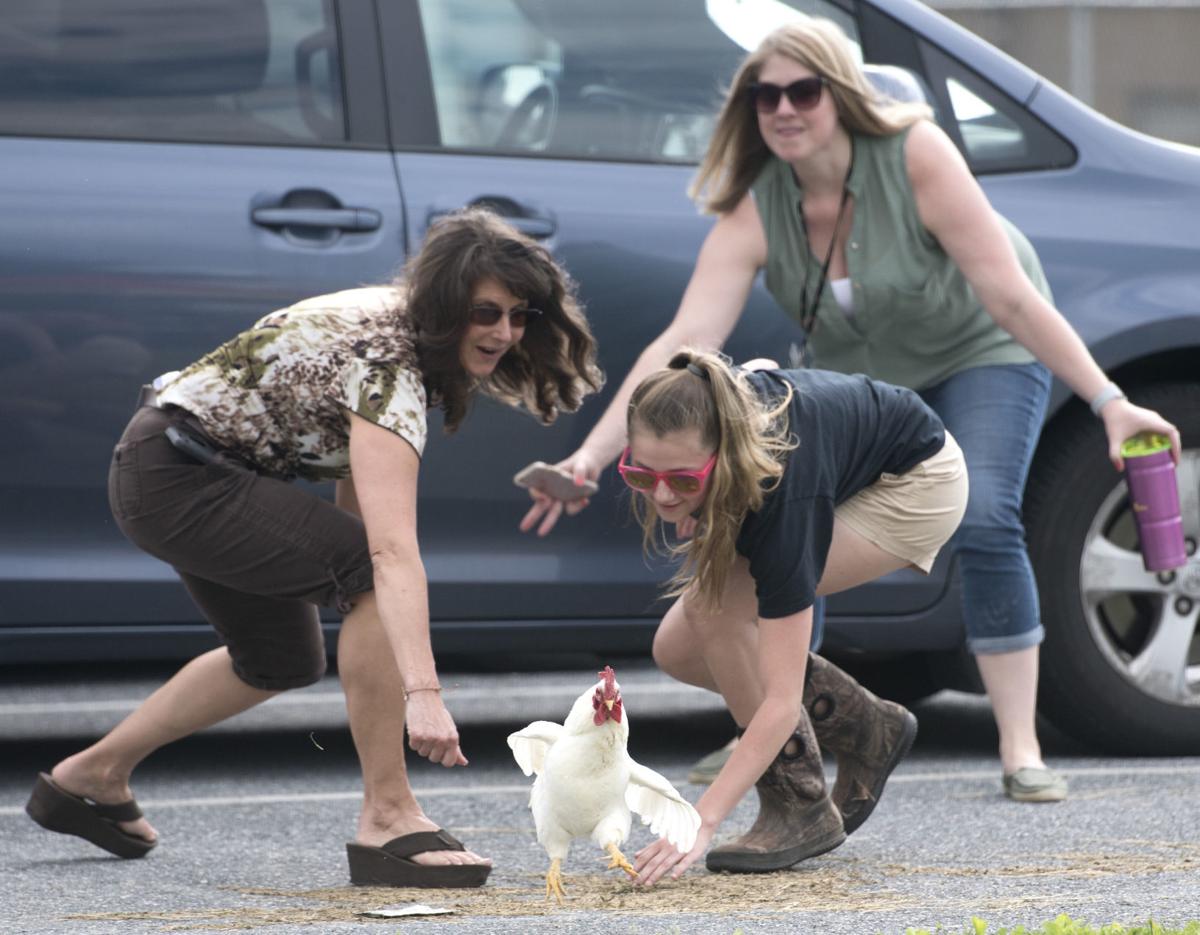 English language teacher Jan Stitley, left, and Morgan Farmer, 14, attempt to grab a rooster as third-grade teacher Michelle Getzandanner blocks a path during a Kids Growing With Grains in-school field trip put on by the University of Maryland Extension Office. 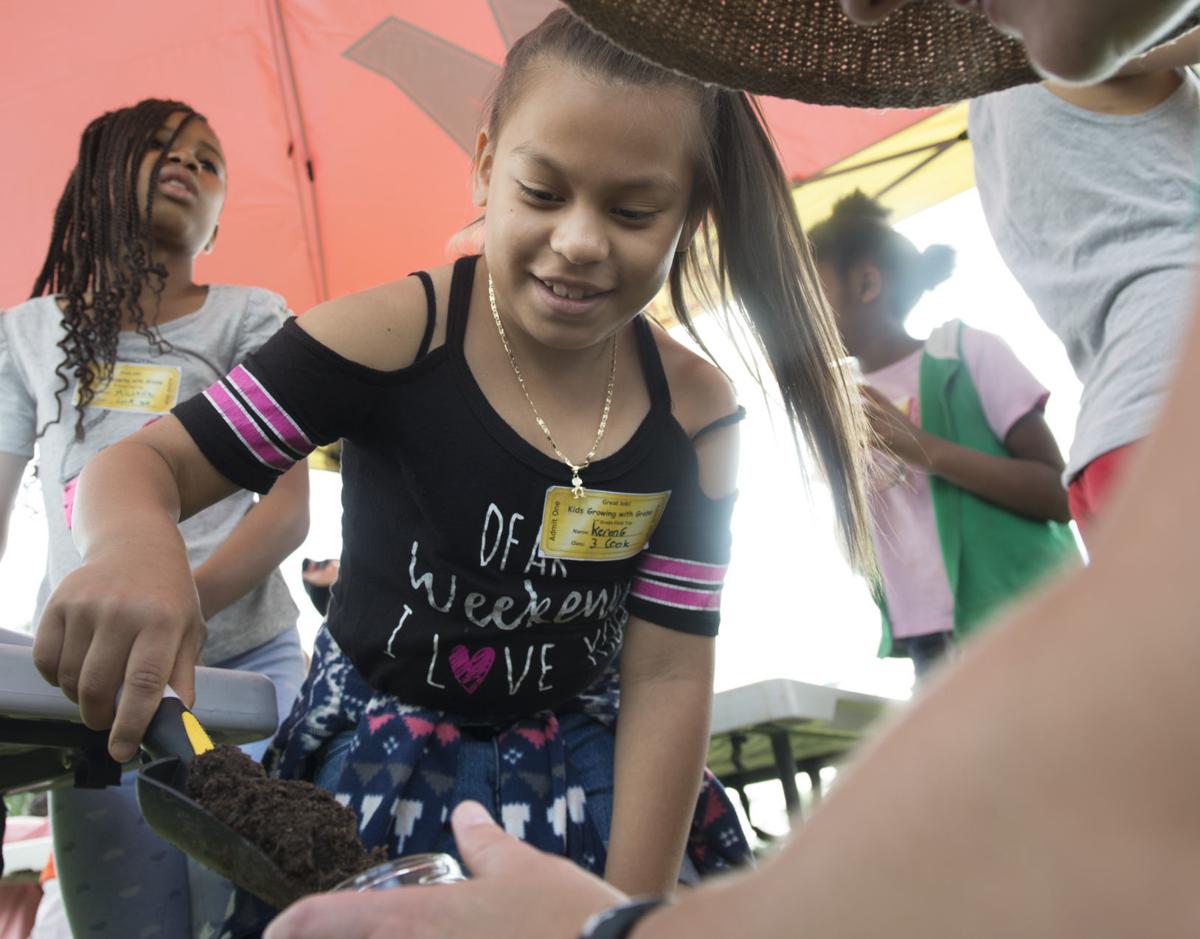 Waverley Elementary School third grader Keren Jirin scoops soil into a jar during a lesson on soil composition as part of an in-school field trip with the University of Maryland Extension Office. 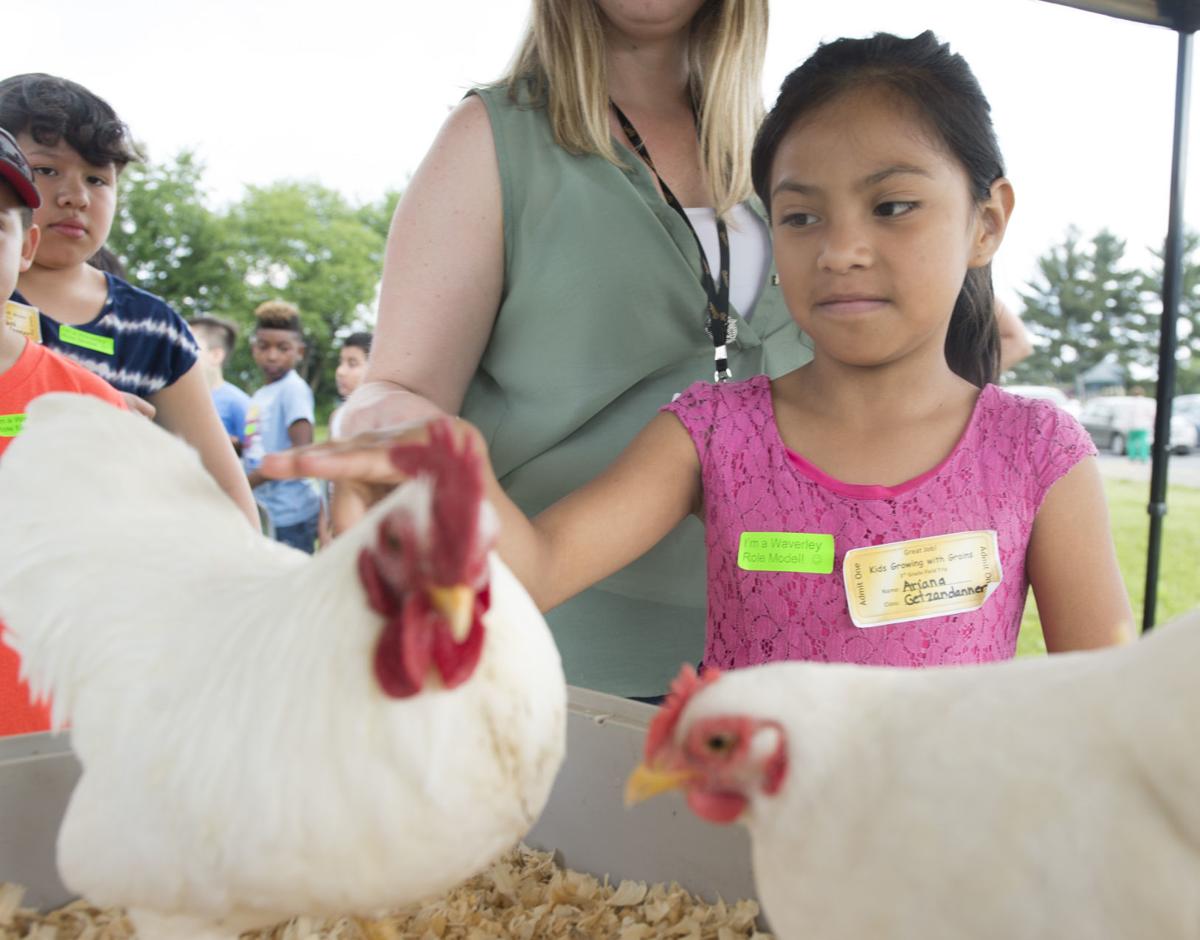 English language teacher Jan Stitley, left, and Morgan Farmer, 14, attempt to grab a rooster as third-grade teacher Michelle Getzandanner blocks a path during a Kids Growing With Grains in-school field trip put on by the University of Maryland Extension Office.

Waverley Elementary School third grader Keren Jirin scoops soil into a jar during a lesson on soil composition as part of an in-school field trip with the University of Maryland Extension Office.

When Morgan Farmer opened the cage door, the rooster inside burst out with a few frantic flaps of his wings. His white feathers ruffled but quickly smoothed as he started to strut across the field at Waverley Elementary School as a group of third-graders watched.

In hindsight, what came next was predictable, Morgan said.

Morgan, 14, leaned down to pick up the rooster, but he bobbed, weaved and flew just out of reach as she tried to corner the wayward chicken. Soon, the entire grade was watching and laughing as Morgan and Jan Stitley — a veteran third-grade teacher — tried to catch the bird. Stitley admitted afterward that, in her 24 years of teaching, she had never been called on to catch a chicken until Wednesday.

They chased the rooster across a quarter of the school’s field, before catching the white rock bantam. Immediately after, Morgan decided to name him “Runaway.”

The rooster’s antics were an unscheduled — but applauded — part of “Kids Growing With Grains” put on by the Frederick County office of the University of Maryland Extension. The daylong, in-school field trip combined nutrition, food science and environmental health into one event for third-graders in Frederick County’s Title 1 schools — those schools with high numbers of children from low-income families.

“Nutrition isn’t really part of our curriculum, so you have to step out of the box to reach kids,” said Jessica Myers, who teaches students at Waverley who are learning English as a second language.

Myers previously taught at Lincoln Elementary School, which is also a federal Title 1 school. In the past, she worked with the extension to bring programs to Lincoln and was instrumental this year in bringing the team to Waverley with its new program.

Kids Growing With Grains prepares students for a field trip in fourth grade to Keedysville to learn about grains. The Waverley students are already signed up to attend in the fall, but there’s always time for a head start.

Through hands-on activities, Myers’ students put their classroom knowledge into action by petting a chicken, identifying soils, naming the parts of a whole grain and dissecting corn kernels.

Daniela Rogel, 9, already knew the differences between clay, sand and silt when she arrived at the soil science tent. Still, she was ready to get her hands dirty.

“We were touching the different soils,” Daniela said.

She explained that clay is hard but becomes soft when you play with it, sand is light, and silt is brown and soft.

Daniela and some of her peers were able to quickly identify the different soils in plastic containers on the table, but it was also an opportunity for the whole class to learn new words — like “organic matter,” said Luis Gautreaux, 9, who speaks Spanish at home. The new words jumped out at him when the group discussed the different parts that make up healthy soil, he said.

Donielle Axline, who is the 4-H coordinator at the extension, explained to her group the way to tell the difference between a hen and rooster. One way is to look at their comb — the raised skin on the crown of their head — which is larger on a rooster.

“We can use our eyes just like scientists to tell the difference between boys and girls,” Axline said.

At another station, the kids got to use their senses of touch and taste to tell the difference between whole and refined grains.

Haylee Staruk passed a container of flour around for the third-graders to put their hand in. They ran their fingers through the coarse, light brown substance and looked at the bits stuck to their fingers. Staruk asked the kids to think about why the flour on their hands was different from the white, fluffy flour they might use at home to make a cake or cookies.

The answer: The natural and healthful “bran” and “germ” parts of the grain hadn’t been removed.

Under a special grant at the extension, Staruk focuses on the Food Supplement Nutrition Education Program, which provides nutritional education to children enrolled in Title I schools who may have fewer opportunities to learn about agriculture and healthy food.

The goal of Kids Growing With Grains is to expose students to new foods and new ways to make meals healthier.

Staruk passed out whole-grain English muffins, tomatoes, broccoli and mozzarella cheese — all of which could be bought at local grocery stores with federal food assistance benefits. The students then followed a recipe — printed in Spanish and English — and assembled personal pizzas that they got to eat.

After they had the chance to taste the alternative healthful ingredients, Staruk asked the students if this was something they would like to eat at home. They overwhelming responded yes.

When children ask for healthier food, their parents are more likely to buy it, Staruk said. However, there may be other limitations, such as cost, that keep a family from buying healthier options, which is why she is careful not to characterize foods as “bad.”

Instead, she framed the difference between refined and whole grains as “sometimes” and “always” foods.

If a family can afford only white bread, then a child should not be ashamed of eating it, she said. But they should also be given the opportunity to know there are foods that can give them more energy and help them be a healthier person.

Having now twice earned second place in the National Corn Yield Contest, Middletown farmer Drew Haines has set the bar for the number of bushe…