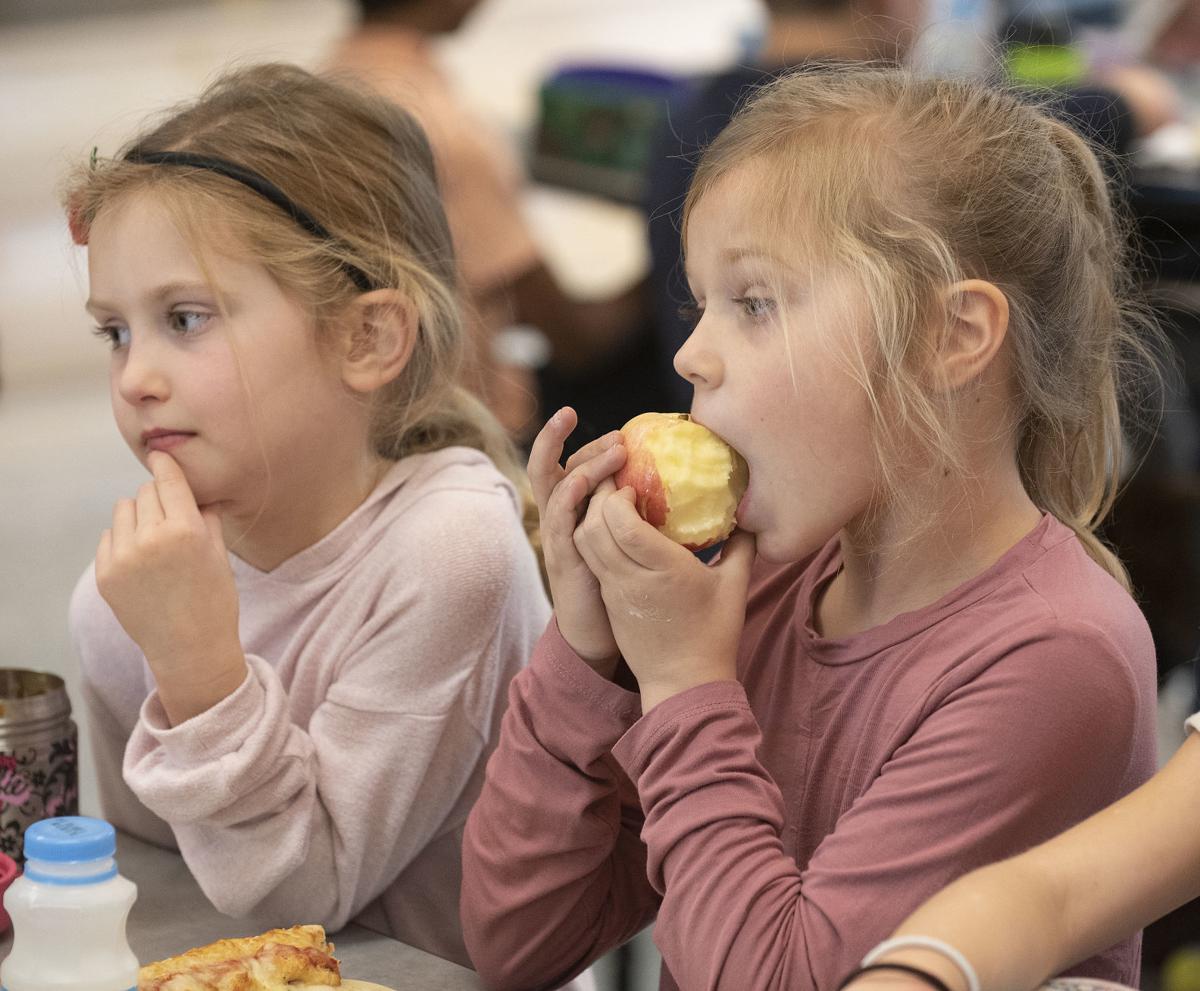 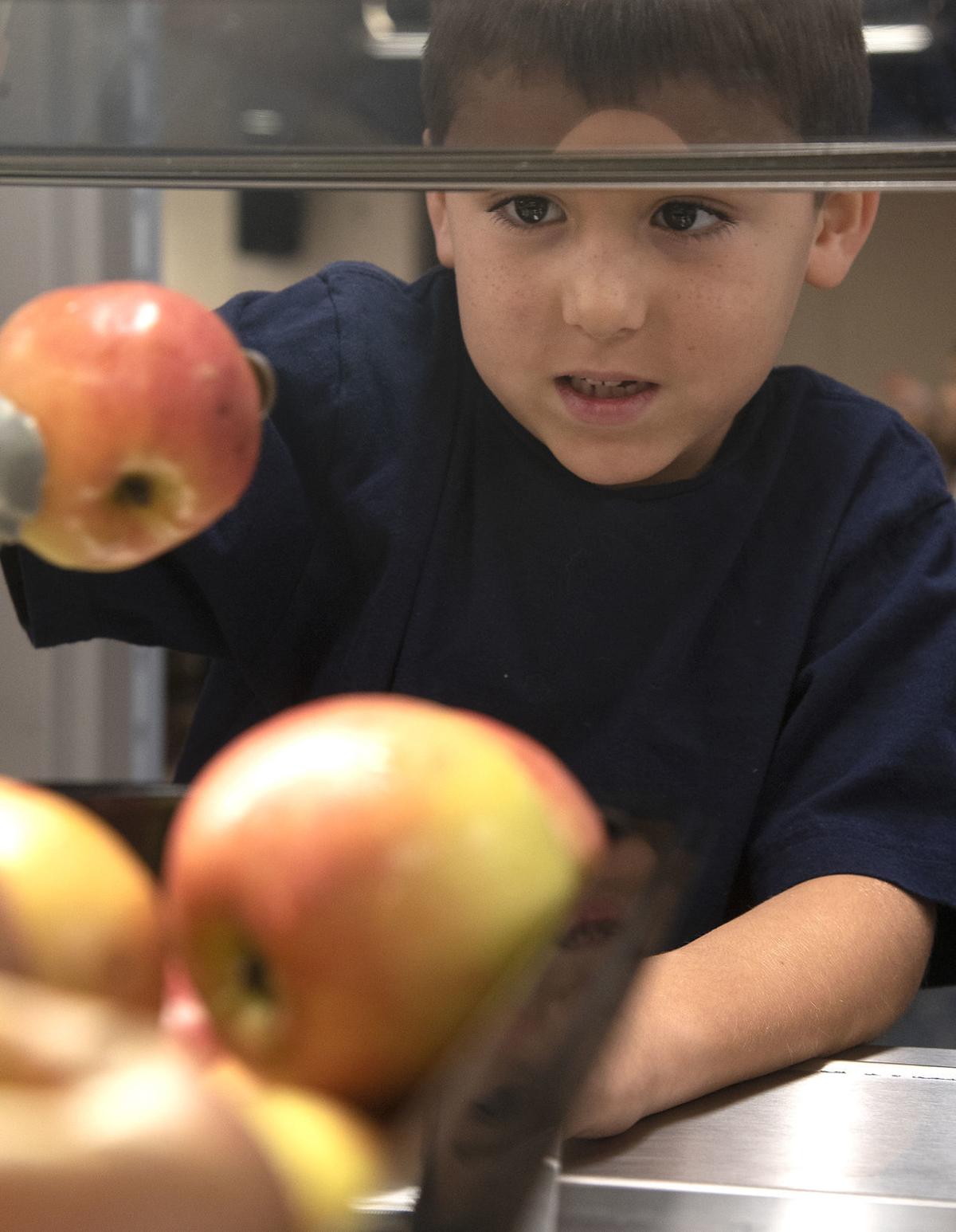 Sugarloaf Elementary School first-grader Marcos Bringas picks out an apple Wednesday from the cafeteria lunch line. The apples are from Catoctin Mountain Orchard near Thurmont. 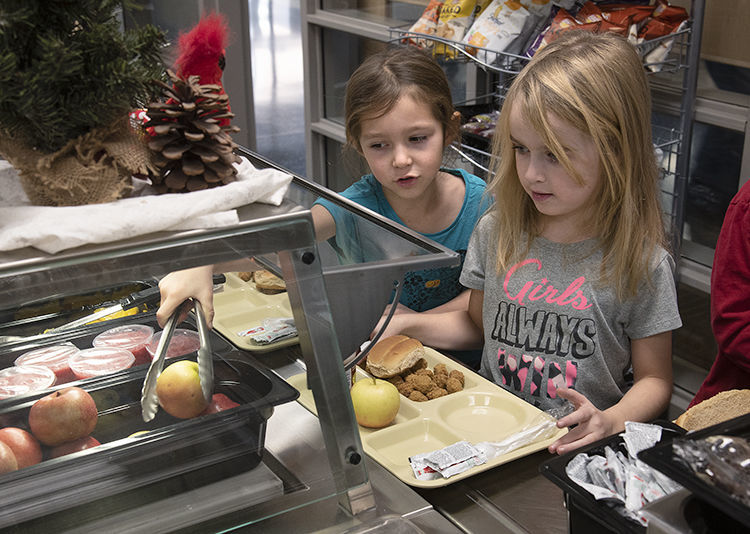 Sugarloaf Elementary School first-grader Marcos Bringas picks out an apple Wednesday from the cafeteria lunch line. The apples are from Catoctin Mountain Orchard near Thurmont.

As Frederick County farmers plan next year’s crops, some are pushing for more produce.

Frederick County Public Schools, in cooperation with two local food advocacy organizations, has spent the past year exploring the feasibility of adding more locally and Maryland-grown fruits and vegetables to school lunches. Where they’re finding shortages, however, is in farmers who will commit ground to cafeteria staples.

“This is nothing without the farmers,” said Steve O’Brey, food procurement coordinator at FCPS. “Right now, we’ve found two.”

Kip Kelley, owner of Full Cellar Farm in Jefferson, is one of the farmers leading the charge to bring Frederick County produce to the lunch table.

He and O’Brey made arrangements in 2018 for him to grow tomatoes, green peppers and lettuce for the early months of the 2018-2019 school year. Unfortunately, rain and flooding hindered his crop, so the agreement didn’t come to fruition this year.

Undeterred, FCPS is still interested in working with Kelley, and he is willing to devote a portion of his 5 acres to the school system’s need for peppers, tomatoes and cucumbers in 2019.

“I think we could do a lot of the peppers, a big bulk of them,” Kelley said.

FCPS currently buys the majority of its food through Keany Produce, which is a Maryland- and Virginia-based distributor. When the weather hurt Kelley’s crops, the school system was still able to put fresh fruit and vegetables on the menu. It just wasn’t from local farms.

Generally, when Keany Produce offers a product grown in Maryland or Virginia, O’Brey will buy it. But by December, cucumbers from Mexico and Honduras, white grapes from Peru and carrot sticks from Canada and the U.S. are as close to home as the selection gets.

Finding local farms to fill the seasonal gaps is one part of the budding Farm to School initiative.

Community FARE — which stands for Food Advocacy Resources and Education — and Fox Haven Farm are helping FCPS draft an “action plan” to integrate more local fruit and vegetables into school lunches with grant money from the U.S. Department of Agriculture.

The Farm to School program is being piloted at five elementary schools this academic year and may be expanded to the entire district later on.

But the academic calendar is proving to be a major barrier to attracting local farmers to the program.

While O’Brey orders cucumbers all 10 months of the school year, he can buy them from a local source during only a few months. That’s because peak growing season in Maryland occurs while school is out for the summer.

The out-of-sync calendars have some Frederick County farmers leery of making commitments to the school system.

“Our season would be short. ... When most of our produce is in, is when they’re not in school,” said Rich Calimer, owner of Scenic View Orchard near Sabillasville, whose family business is also considering joining the Farm to School effort.

The bigger problem, however, may be the lack of local food production overall.

“We have so few farmers in this county — who grow vegetables — that it’s going to take some time to build that,” said Janice Wiles, president of the Land and Cultural Preservation Fund, of which Community FARE is an arm.

The buildup could happen one of two ways. The first would be to connect Frederick County farmers to Keany Produce and make them a contracted supplier for the company.

Keany Produce is open to bringing on new suppliers, but not at the expense of taking business away from a current supplier, said Mary Baran, a national accounts manager for the company.

If Keany Produce were to add a new supplier, the farm would have to commit to producing a certain volume — generally a pallet, which is between 30 and 60 cases — in order to balance transportation costs. There would also have to be demand for the new product at the other end, Baran said.

Another wrinkle with this option is that if Keany Produce processes locally grown produce, it would become part of its general supply chain and the company could not set it aside as Frederick County-specific produce to send back to the county.

However, a benefit of FCPS’ current contract with Keany Produce is that it does not keep the school system from buying from other sources as it pleases.

The second way Frederick County could build up its local food production is by aggregating produce on its own. For this reason, Wiles has considered creating a “food hub” where farmers would drop off cases of the same product that could then be sold in bulk to the schools or other wholesale buyers.

The added benefit of a food hub is that it can lower another barrier keeping farmers from selling to FCPS, which is the need to wash and process the produce.

Preparation is key, because FCPS does minimal cooking and cutting at its school cafeterias. It buys carrot sticks and celery sticks from Keany Produce pre-cut, and it buys washed and chopped lettuce packed in bags, O’Brey said.

One of the reasons Calimer was on the fence about joining the Farm to School initiative on Monday was he was unsure how the orchard could do the extra preparation work.

For this reason, the Farm to School team is also considering setting up a mobile processing center, which would drive between the schools and wash and prepare the raw produce from Frederick County farms. However, both local options would require space, time and resources to get underway.

The Farm to School team has six months to finish its action plan. After, the team plans to apply for an implantation grant from the USDA.

At the core of the effort, however, are farms.

“We’re trying to get this process going, and again, farmers are the key,” O’Brey said.

Procuring from local farms may take more work and time, but O’Brey says he’s ready to invest both. The challenge will be as more farms become interested in the program, at which time someone else may be needed to coordinate the program.

For Kelley, who has two young children who are about to be of school age, the investment in Farm to School initiatives by his farm and FCPS appeared well placed.