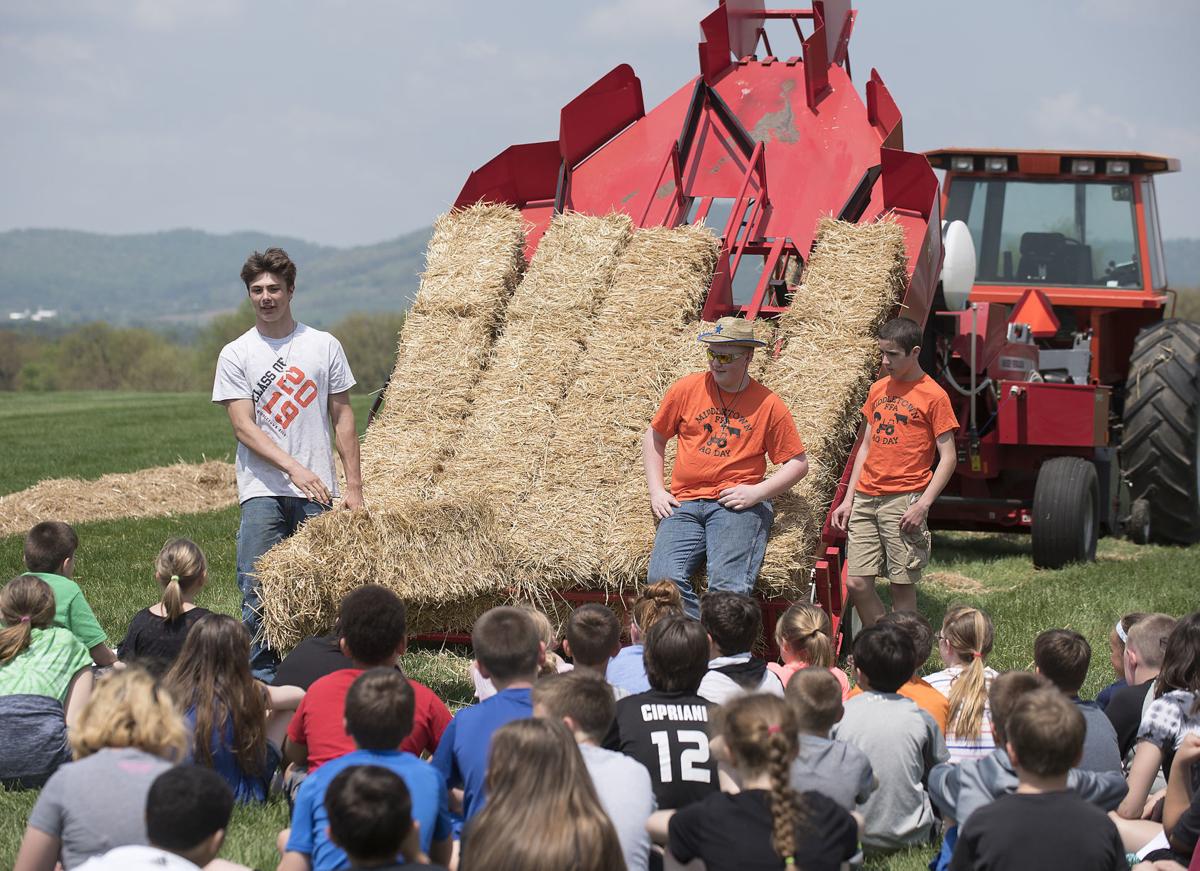 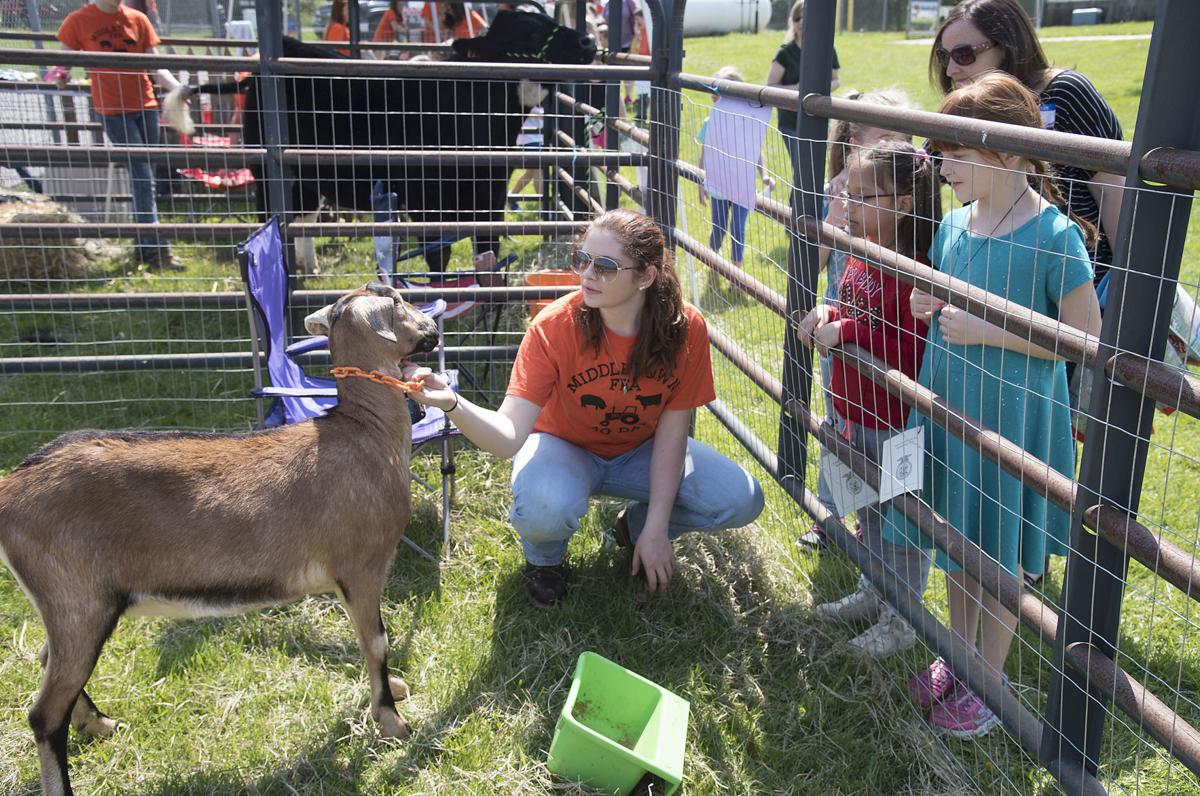 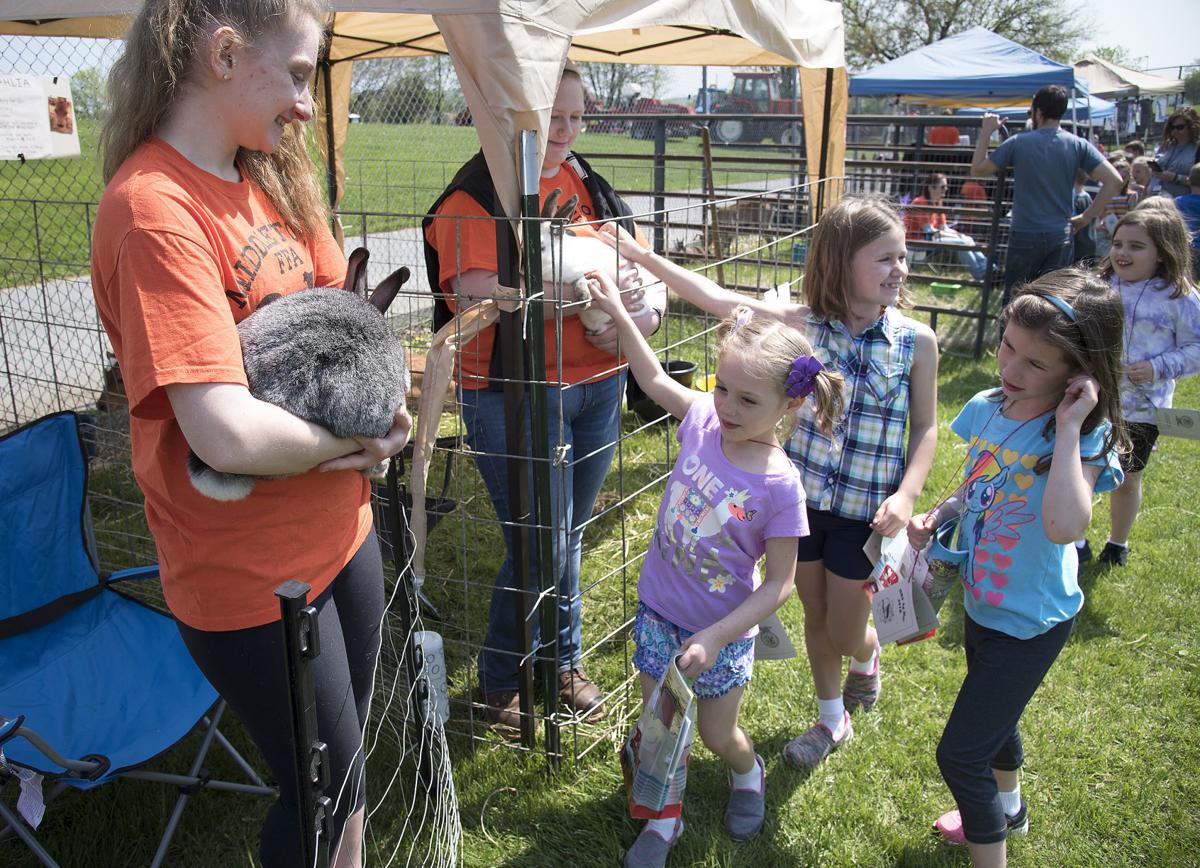 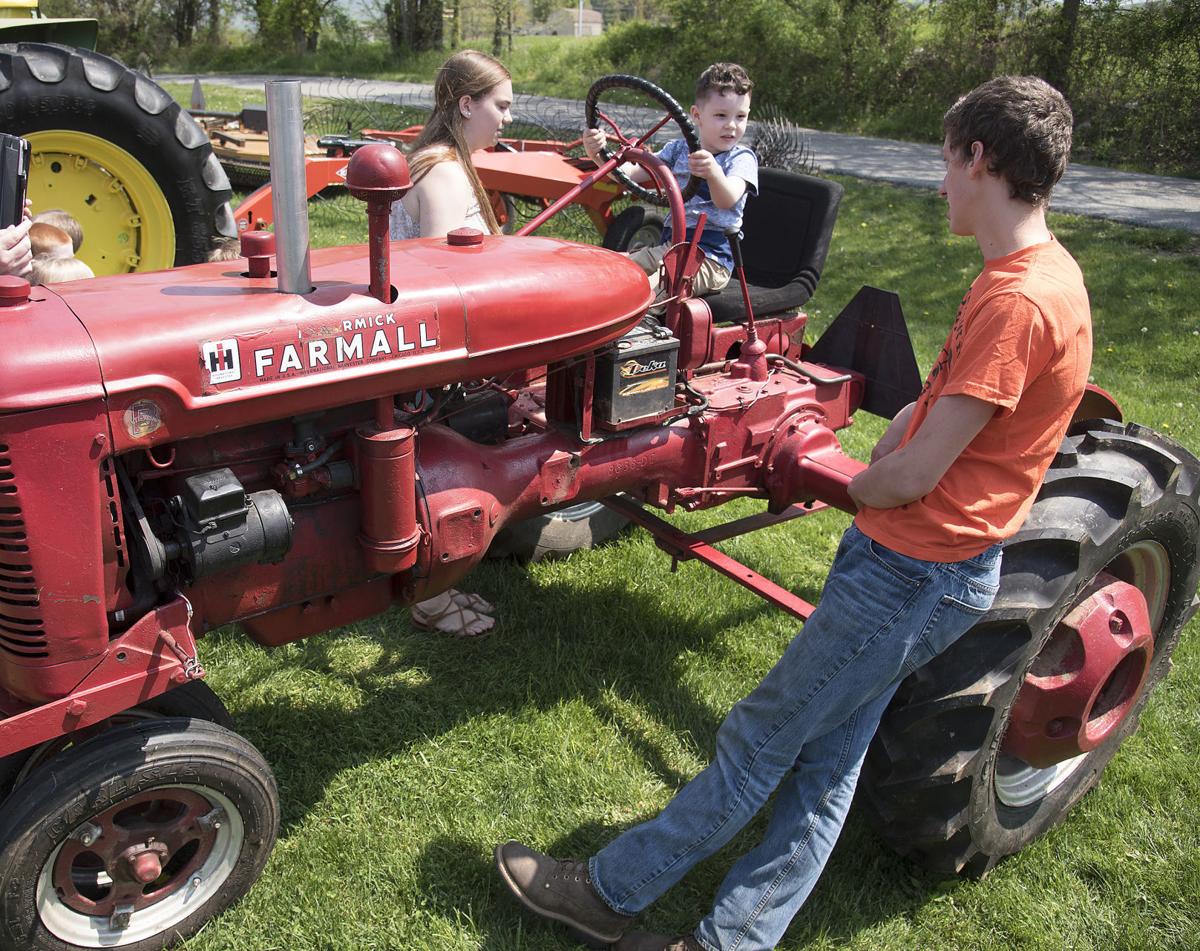 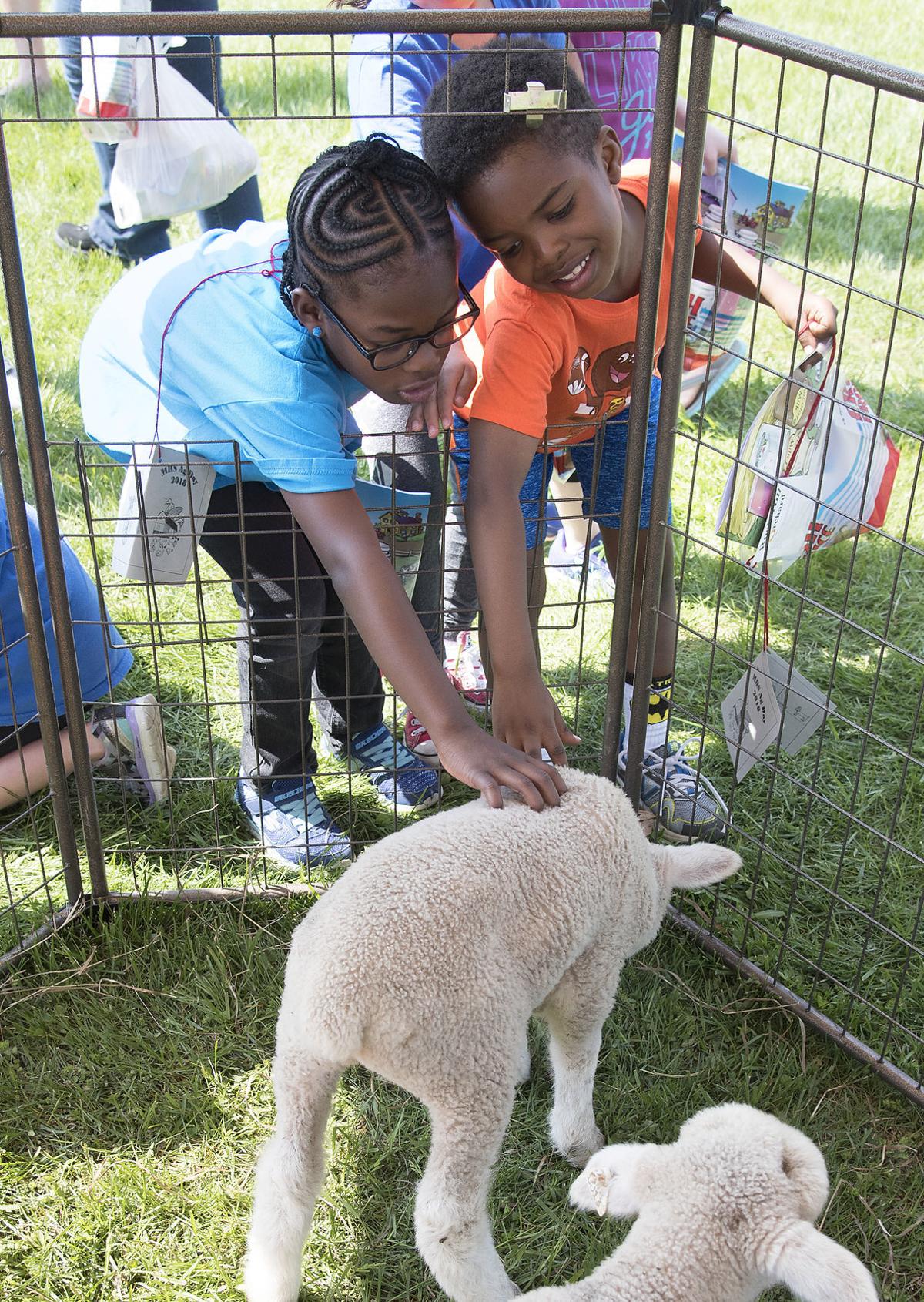 Isaac Summers swung the hay bale up in the air, aiming for the one empty slot on the large red hay accumulator. The bale landed on its side, so that it stuck up differently from the rest, but without missing a beat, he climbed up the stack to fix it and then rode the hay down as the latch on the back of the trailer unexpectedly released.

The crowd of fifth-graders watching him erupted into applause and laughter.

Isaac, a junior in the Middletown High School FFA chapter, then jogged to the front of the trailer and turned over on the tractor’s engine. A plume of black smoke puffed into the clear blue sky as the tractor and trailer jolted forward a few feet so that the hay bales laid themselves out perfectly on the football field like a farmer would have on their field.

It was an exciting Tuesday for the Middletown Elementary School fifth-grade class, which had just finished PARCC testing the day before, said the grade’s team leader, Coralyn Streett.

This was the first year that the fifth-grade class had been able to attend Agriculture Awareness Day at the high school, which is hosted annually by the school’s FFA chapter to teach first-graders about where their food and clothing come from. The program was expanded to include the fifth grade this year to give them a better idea of the full range of agriculture careers.

Before the hay demonstration, senior Lexi Glover asked for a show of hands of who ate breakfast and got dressed that morning. The second question caused an exclamation of giggles.

Lexi has been a part of the high school’s FFA chapter since her freshman year. Her goal is to study equestrian science in the fall of 2019 and eventually open a therapeutic riding ranch for people with mental health challenges, she said in an interview after her speech.

Participating in the annual agriculture day is an opportunity for her and her peers to connect with kids and show them career options that agriculture offers beyond being a farmer, including veterinarians, horticulture and biomedical science, Lexi said.

Veterinary Medical Officer Brooke Ridinger had her group of fifth-graders dress for the job, literally.

First, she held up a white zip-up suit for the class to see and had a student volunteer to climb inside. Then she added boot covers, a hairnet, respirator, gloves and goggles. She asked the class to think about walking into a barn with 100,000 chickens or turkeys.

“If they get sick with something like avian flu, we can too, because it’s transmissible,” Ridinger said.

After the student was completely suited up, Ridinger explained how the gear was meant to protect veterinarians like herself from bacteria and viruses. Then, she showed the group how she would properly remove the gear — slowly taking off the respirator and rolling off the suit so it didn’t come in contact with clean skin — so that she wouldn’t get ill or sicken others later.

“We’re just trying to educate people on good care of their flocks,” Ridinger said after the demonstration.

While the fifth-grade group focused on careers, the stations and demonstrations set up for the first-graders aimed to more broadly introduce students to agriculture including what they eat, how it’s grown and what machines are used to do it.

Dawn Kasperek’s first-grade class from Middletown Primary School showed beaded bracelets to one another as they stood in line to walk over to the tractor station.

Leah Gordon, 7, explained that each bead color represented a type of food grown in Maryland. There were “eggs, milk and a bunch of yellow foods,” Leah said.

Agriculture day is a good way to wrap up the school year, because it ties together several parts of the first-grade curriculum, Kasperek said. In the classroom, her students learned about organisms by studying mealworms and planting lima beans, radishes and corn, but at agriculture day they get to see bigger organisms and learn from someone other than an adult.

Some of the other stations let students get hands-on experience at the farm.

A wood goat and cow with rubber utters taught the students how to milk. The station was a favorite of Carter White and Wyatt McCalmont, 7, who both attend Wolfsville Elementary School. The goal of all the stations was to help the first-graders make connections between what they saw on Tuesday and what is served on their plates at mealtime.

When Wyatt was asked where his food comes from, he said, “I don’t know. Oh, yeah! Farms.”

Up in the mountains of Gambrill State Park, four students from Middletown High School looked at a flooded field and the young hardwood forest …