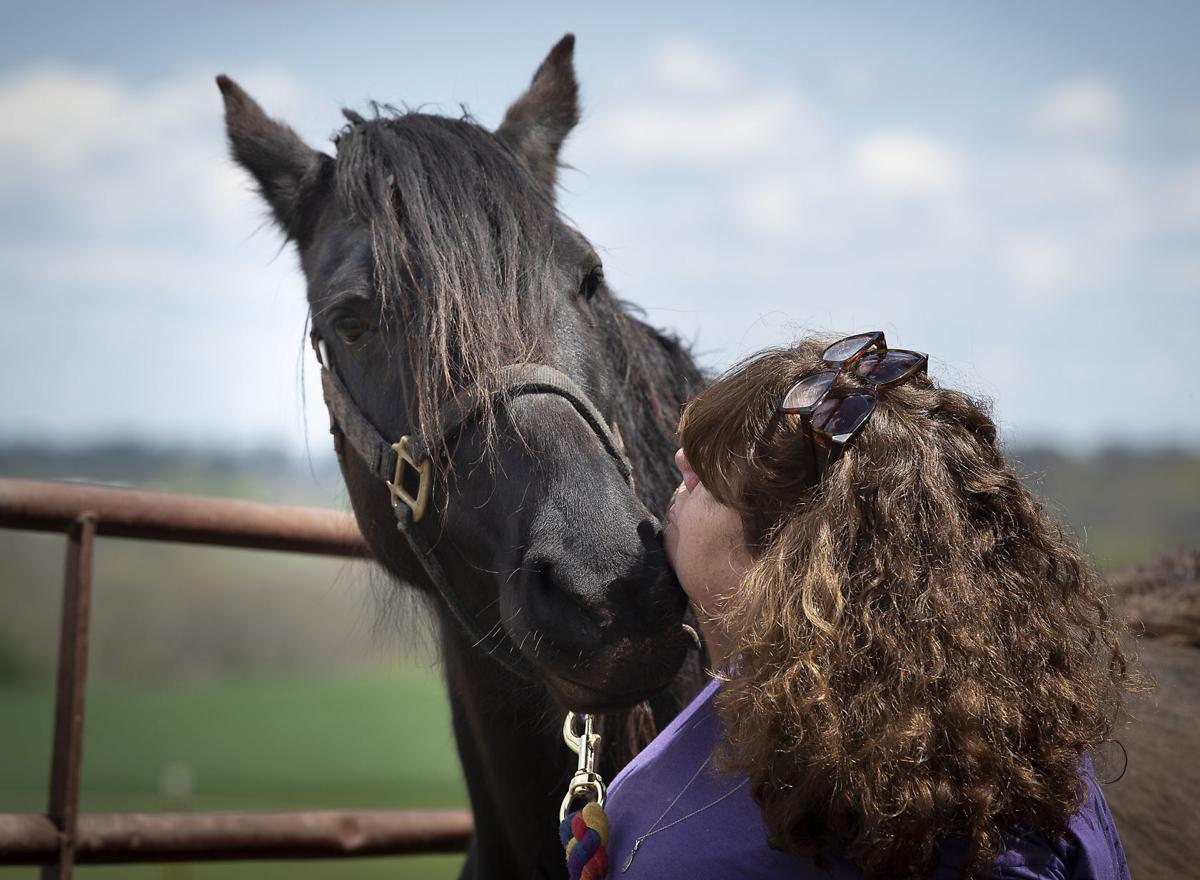 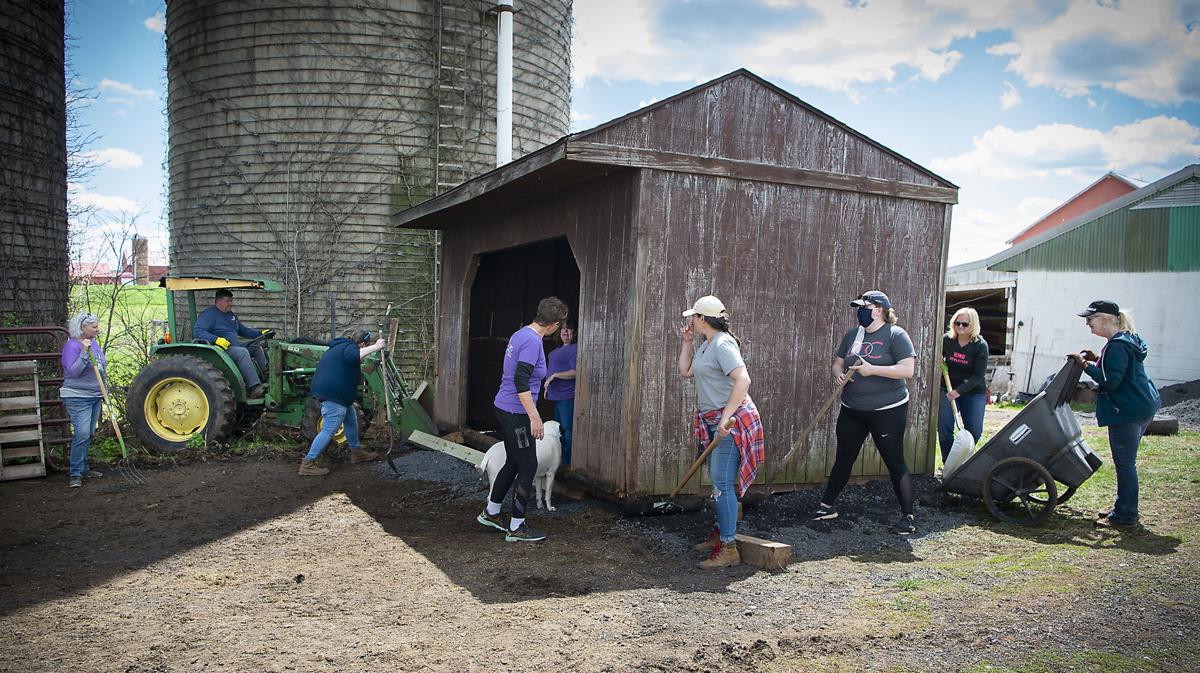 Volunteers gathered Sunday on the Rocky's Horse Rescue and Rehabilitation farm in Thurmont to make a number of repairs, including leveling and supporting a loafing shed. 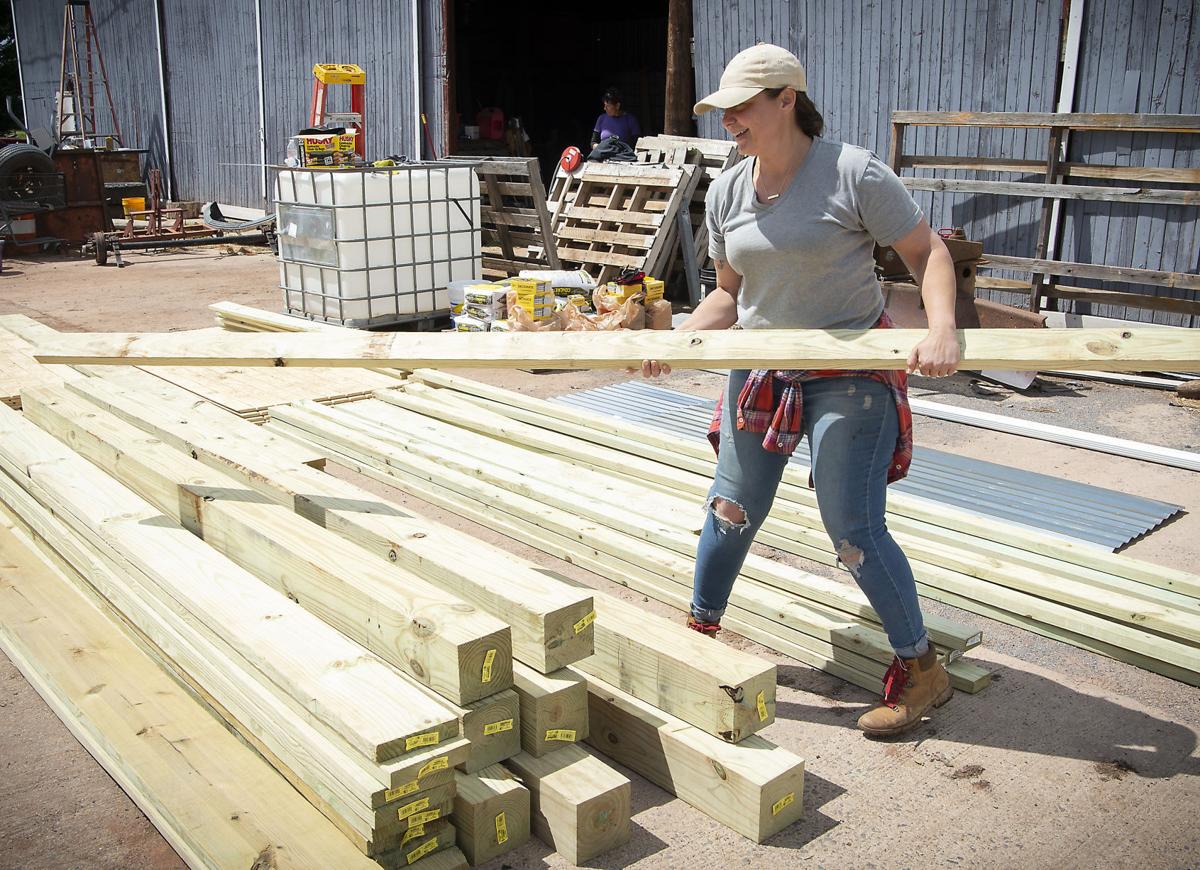 Karen Snowden, public relations coordinator and volunteer at Rocky's Horse Rescue and Rehabilitation farm, grabs a piece of timber donated by The Home Depot that is being used to make repairs on the Thurmont farm. 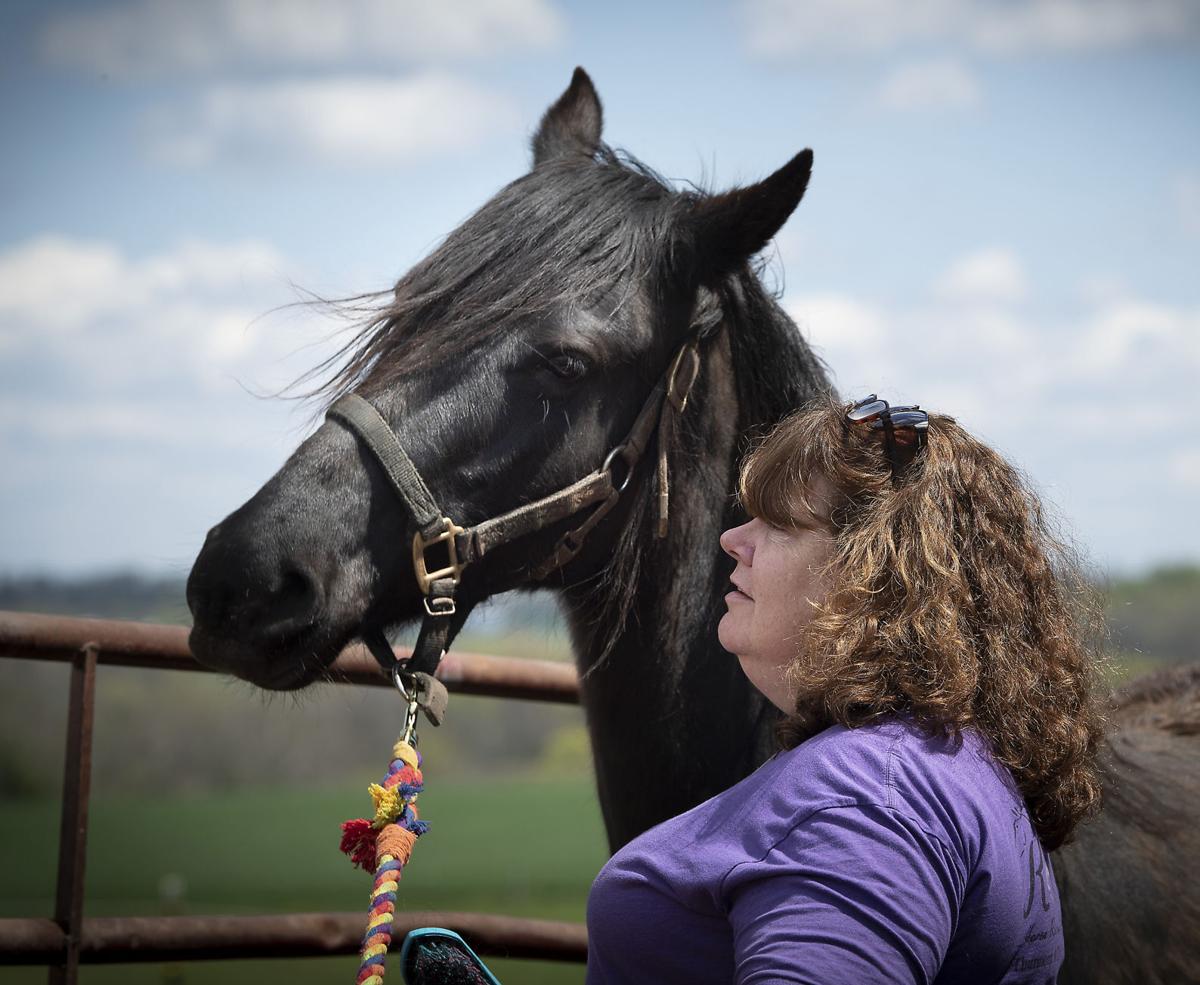 Volunteers gathered Sunday on the Rocky's Horse Rescue and Rehabilitation farm in Thurmont to make a number of repairs, including leveling and supporting a loafing shed.

Karen Snowden, public relations coordinator and volunteer at Rocky's Horse Rescue and Rehabilitation farm, grabs a piece of timber donated by The Home Depot that is being used to make repairs on the Thurmont farm.

When Sharon Burrier first met Whisper, the horse’s bones stuck out and her tangled mane reached her knees.

Whisper had recently given birth to a colt and was pregnant again, but her ribs still showed. She was kept in a kill pen in Pennsylvania with another mare, River, and her colt. All four had equine influenza.

Burrier said she knew her nonprofit, Rocky’s Horse Rescue and Rehabilitation, had to save them.

Whisper, River and their foals came to the green pastures of Thurmont in August. Whisper is due to give birth any day now. From her private pen on Sunday, she watched a small army of volunteers lift a horse shelter and begin to lay a new foundation.

The rescue, founded by Sharon and her husband Danny about seven years ago, recently received $10,000 in supplies through The Home Depot Foundation. They’re using the donation to help the all-volunteer nonprofit replace one horse shelter and refurbish another.

“This grant has been life-changing,” said Karen Snowden, a spokeswoman for the rescue. “We were floored, we didn’t think it was real.”

The bulk of the rescue’s funding comes from donations, which help pay for food, shelter and vet bills for their 36 equines, including some spunky mules and donkeys. Crucial needs must be met first, Burrier said, so construction projects that aren’t absolutely necessary can get pushed off. During the COVID-19 pandemic, she’s seen a sharp decline in donations as people fell on hard times, and the rescue wasn’t able to hold as many in-person events to draw support to their cause.

“When you have this many horses, there’s never enough,” Burrier said.

She wishes she could save more. Burrier’s seen kill pens full of horses in terrible condition, with numbers glued to their coats. She doesn’t easily forget the ones she can’t save, but the ones she does take home to Thurmont come with the promise of a better life. Some are adopted after rehabilitation, like River’s and Whisper’s colts, while others stay in the rescue’s sanctuary.

Burrier’s not sure what Whisper’s future will be. After nine months in their care, she still requires a gentle touch. When someone enters her pen, Whisper tends to back away.

Burrier approaches the black Tennessee Walking Horse slowly with an outstretched hand, making encouraging noises. Perhaps in search of a treat, Whisper gingerly steps forward to sniff, but is quick to pull her head back to keep hands from touching her halter. Burrier stayed calm and, eventually, Whisper rested her mouth in her hand.

“She gives me hope,” Burrier said.

Though this moment of affection may seem inconsequential to outsiders, Burrier said it’s a big improvement from nine months ago. Nobody could touch Whisper, and if you came too close, she would tremble. Burrier doesn’t know exactly what happened to Whisper in the past, but she suspects it wasn’t good.

With a pen between her and others, Whisper is liable to stick her head between the bars to ask for a scratch or treats. Burrier thinks the horse feels more at ease with a barrier between her and humans. They work with Whisper little by little so she can trust them to care for her.

Burrier was encouraged to see the rescue’s volunteers come together to refurbish the shelter beside Whisper’s pen. It’ll be a place horses like Whisper can use while in rehabilitation or pregnant. Another shelter in a fenced-in pasture will be taken down and rebuilt to double the size of the current structure. New horses will spend time there after they’ve cleared quarantine.

Burrier was quick to praise the volunteers and community that supports them. Rocky’s Pizza in Thurmont, plus local supporters Brenda and Tony Rapolli, kept the volunteers fed. She said the rescue is always looking for volunteers, and they have more build days ahead to finish the shelters and work on fencing. Sign-ups can be made at rhrr.org. They also welcome sponsors to help pay for the care of the horses.

The truck that hauls the trailer they use to transport animals recently broke down, and the rescue started a GoFundMe to replace it as soon as possible.

Despite the financial cost, physical toll and emotional burden it takes to care for once-neglected horses, Burrier and her volunteers are committed to their cause.

Snowden said they carry on because, “If we stopped, who’s going to do it?”

“It’s either in your heart or not,” she said.

Insuring yourself properly in a COVID and post-COVID economy

Part 2—What is limited lability coverage and how much do you need?