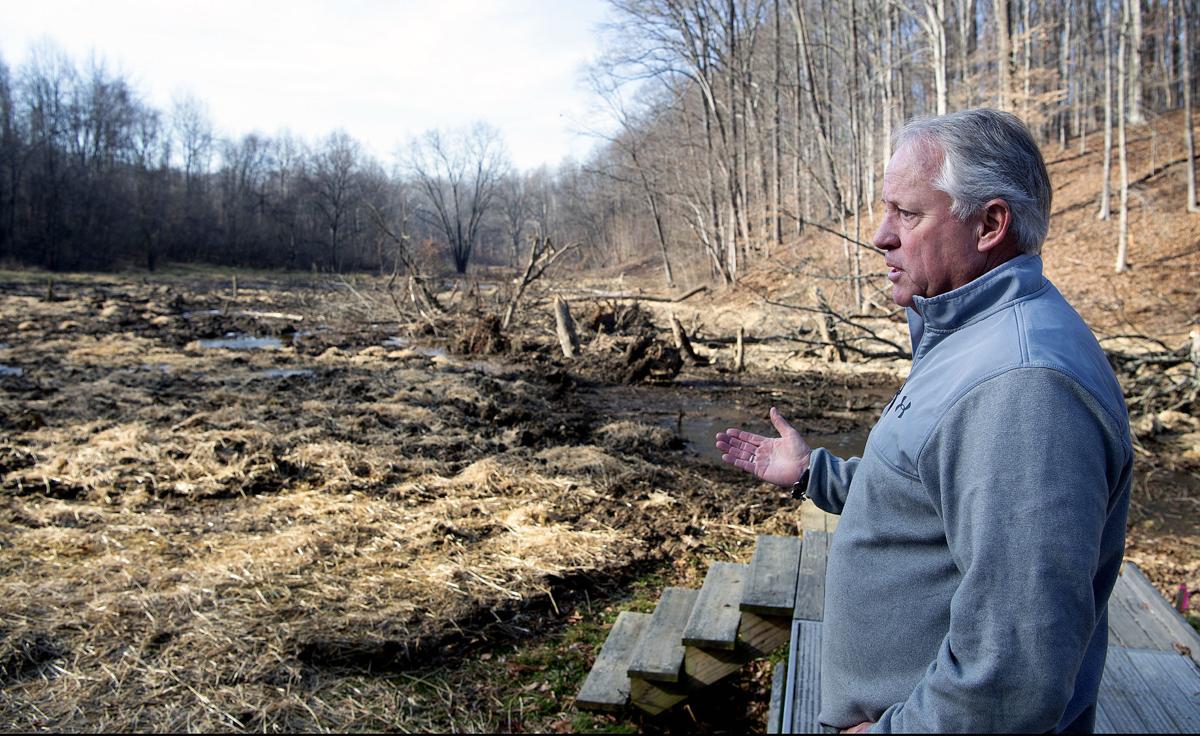 Joe Richardson stands at the edge of marshland that has been created from the eroded stream bed of the north branch of Bennett Creek on the 115-acre property that is home to Bar-T Mountainside near Urbana. A stream restoration project is aiming to reshape and restore the creek. 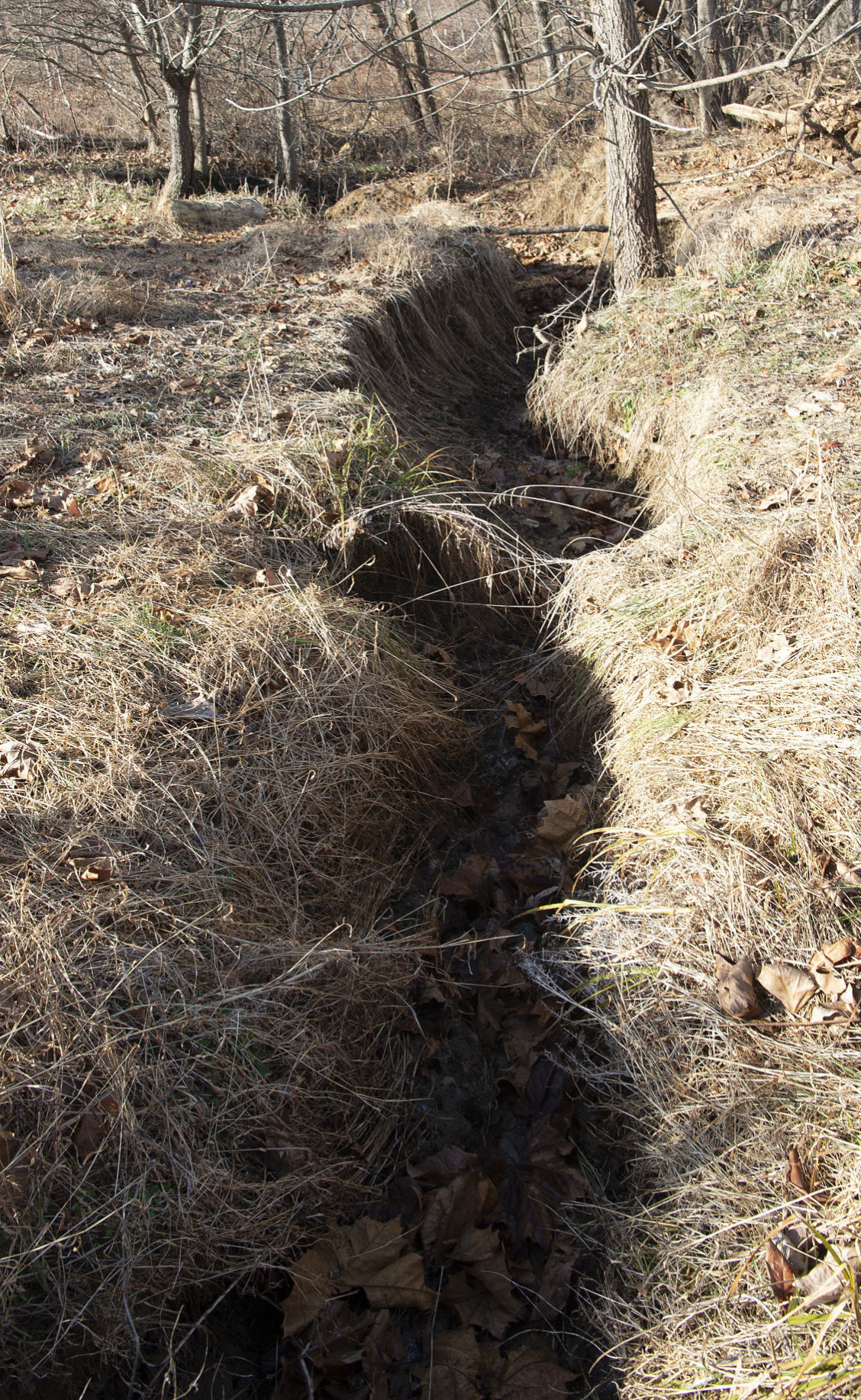 One stretch of the north branch of Bennett Creek has been untouched and eroded severely creating deep, narrow banks causing nearby trees to fall. 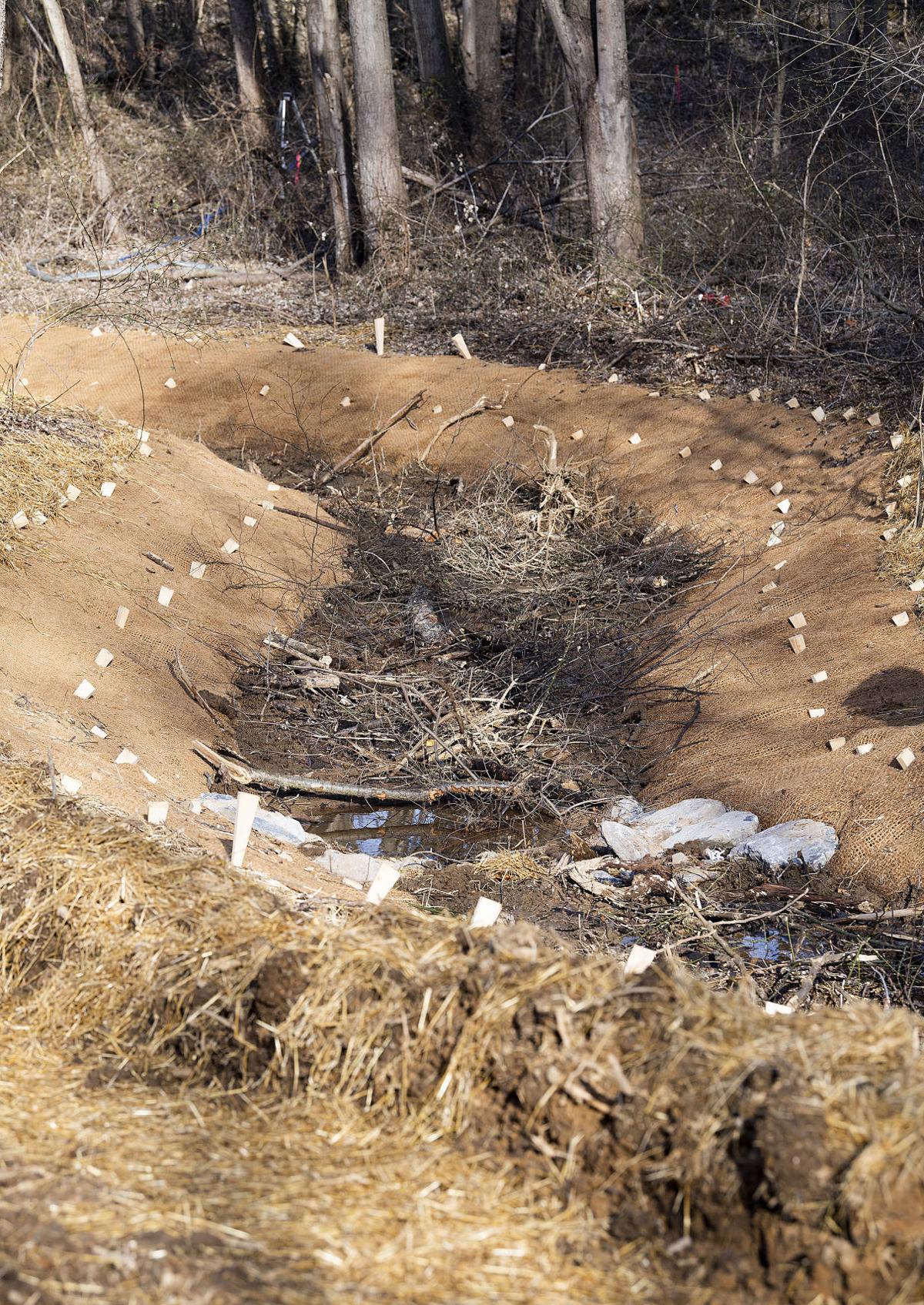 A finished portion of the creek has been reinforced and designed to slow the flow of water using natural material such as trees, rocks and soil.

Joe Richardson stands at the edge of marshland that has been created from the eroded stream bed of the north branch of Bennett Creek on the 115-acre property that is home to Bar-T Mountainside near Urbana. A stream restoration project is aiming to reshape and restore the creek.

One stretch of the north branch of Bennett Creek has been untouched and eroded severely creating deep, narrow banks causing nearby trees to fall.

A finished portion of the creek has been reinforced and designed to slow the flow of water using natural material such as trees, rocks and soil.

Slowing the flow is the name of the game.

A stream restoration project is aiming to reshape and restore the north branch of Bennett Creek, which flows into the east end of Joe Richardson’s property near Urbana.

“I believe in stewardship much more so than ownership,” Richardson said.

Some goals of the restoration project include addressing severe sediment erosion, reshaping the creek and restoring the flood plain.

Ultimately, any erosion that occurs in the creek will be carried into other waterways, such as the Chesapeake Bay.

Some erosion is normal. However, up to 5 or 6 feet of sediment has eroded horizontally. This keeps natural flooding from occurring, vegetation from growing on the streambanks and nutrients from being filtered.

In June 2017, the restoration project received over $1 million in funding from the Maryland Department of Natural Resources Chesapeake and Atlantic Coastal Bays Trust Fund.

Frederick County also chipped in almost $97,000 for engineering and design.

Donald Dorsey, a project manager for the Frederick County Office of Sustainability and Environmental Resources, said one of the main goals for the county is finding cost-effective ways to improve water quality. This project was a good candidate for that and had previously been identified in a watershed study as having severe erosion.

“Ultimately, the biggest goal is in five years, people wouldn’t even know that there was a stream [restoration] project there,” he said. “It would return back to a natural state where things are kind of self-sufficient.”

“Since we’ve purchased the property, the stream looked completely different,” Richardson said. “There were some places where there was 5-foot sediment walls that over two or three years kind of blew out and the stream was trying to reshape itself.”

The changes are meant to force the water to flow more slowly to reduce erosion and create the opportunity for nitrogen and phosphorus to be filtered out of the water by a wetland area and creek-side plants and trees.

Students from several schools, including Urbana High School, have been part of the restoration.

“We’re an environmental educator,” Richardson said. “There’s so much opportunity for teaching here.”

In March, planting will begin. Hundreds of trees and plants such as aquatic grasses will be added.

Richardson said he hopes to make the land a showcase for sustainable architectural, energy, agricultural and environmental practices.

“Fifty years from now, long after I’m gone, I’m hoping amphibians and habitat[s] will thrive here, that this will be a place where people can come and see what stewardship looks like.”

Kudos to Joe Richardson for a positive project… but in saying he believes in stewardship more than ownership, he posits a commonplace but false dichotomy. Ownership is one of the best guarantors and incentivizers of stewardship. A person or organization that owns a property has the greatest incentive to think about its longterm value. Philanthropy comes and goes. Politicians too. They love using other-people’s money on popular projects, and the announcements and ribbon-cutting that make them look good. But they have little longterm interest in the project, or in anything else really. Ownership and stewardship however go hand in hand.

Peter, Is that why many petroleum refineries and other chemical plants have corrective action orders to clean up contamination from their operations? What about all of the abandoned mine sites that were "owned" at one time? Ownership doesn't guarantee stewardship. As it relates to farming, how many farmers were worrying about thier impact before regulations? How many of them worry about the impact a lack of diversity over large areas (corn farms for miles and miles) is having on the ecosystems?

MD1756: ownership doesn't guarantee stewardship, agreed. But it helps a lot -- that was my point. Part of the problem of mining and oil leases may be that they don't constitute full ownership of the property, so there is less incentive to stewardship. Certainly, it can't guarantee there won't be external impacts. Those have to be dealt with separately.

Owning the land may help if you're talking about individuals but not likely for corporations and large farming operations. Oil refineries and chemical facilities (certainly major ones) do own their property and they only care about contamination of the land to the extent that they might have to pay to clean it up someday (although required cleanup is questionable especially since EPA doesn't like adding sites to the Superfund list and the corrective action process is not always successful at truly mitigating the contamination). As far as mining, if you've seen any google earth images of, for example, copper mining, there is no land left. They don't mine underground they take away the land and leave a deep pit (not like it used to be when owning the mineral rights were separate from owning the land on top where both could theoretically exist at the same location).