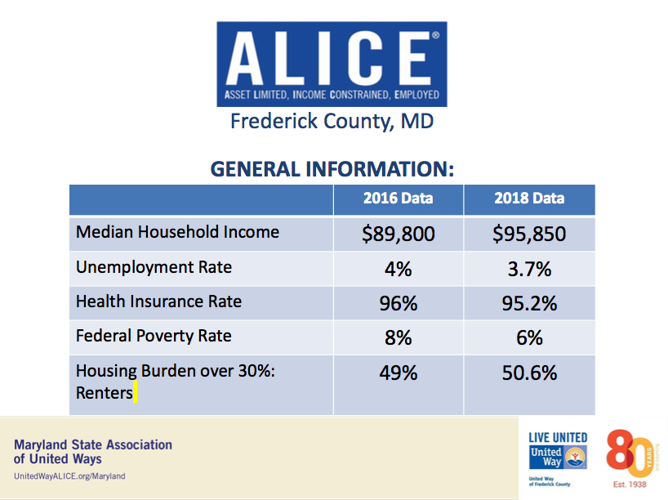 Household income and expenditure data compared from 2016 to 2018. 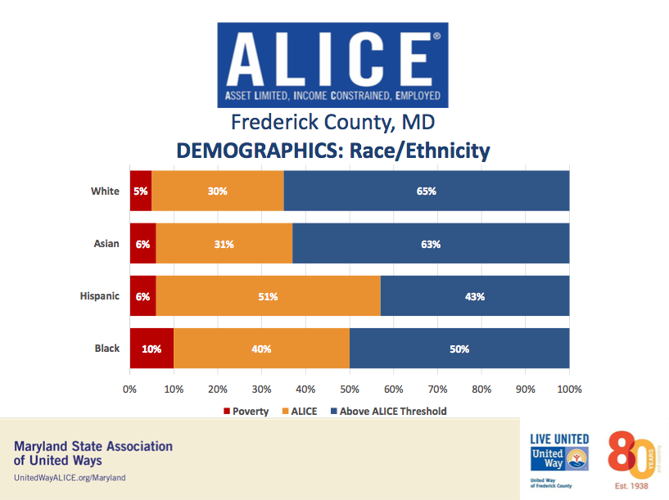 A comparison of poverty levels for different racial/ethnic demographics.

Household income and expenditure data compared from 2016 to 2018.

A comparison of poverty levels for different racial/ethnic demographics.

For the first time in a decade, the number of Frederick County residents struggling to afford basic necessities declined, according to a comprehensive United Way report that is released every two years. But that progress is likely to be short-lived.

In 2018, 37 percent of the 95,903 households in Frederick County qualified as ALICE (Asset Limited, Income Constrained, Employed) households, according to the report. That is down from 39 percent in 2008.

The ALICE report released Tuesday morning also showed median income in Frederick County rose substantially between 2016 and 2018, jumping from $89,800 to $95,850 during that time frame.

However, the positive trends indicated in the report are tempered by the ongoing coronavirus pandemic. When the data is compiled for 2020, the next ALICE report is not likely to be so rosy when it's released in 2022.

"No one knows where pandemic is going in coming months," Maria Herrera, the executive director of the Spanish Speaking Community of Maryland Inc., said during a panel discussion put on by the United Way of Frederick County on Tuesday to discuss the ALICE report. "But I do foresee additional challenges that will only move more families to ALICE and poverty levels as we continue to weather this economic and emotional storm."

In Frederick County, individuals fall under the ALICE threshold if they make less than $47,268 per year. For a family of four (two adults, an infant and a preschooler), the standard rose to $109,176, marking the first time an ALICE budget had exceeded $100,000.

The ALICE threshold is what the United Way says is needed for individuals and families to earn a basic standard of living.

At 37 percent, Frederick County stood in the lower half of Maryland's 24 jurisdictions when it comes to the percentage of ALICE households with 35,291 total households in that category.

Somerset County on the Eastern Shore had the highest percentage of ALICE households with 57 percent of its 8,383 households qualifying, while Howard County had the lowest with only 28 percent of its 116,903 meeting the standard.

Both of those numbers will likely be on the rise when the coronavirus pandemic is factored into the next report, as the unemployment rate in Frederick County nearly reached 10 percent in May.

In Frederick County, Hispanics struggle more than any other race or ethnicity to make ends meet, according to the data. More than half of all Hispanics in Frederick County live above the federal poverty level but below the ALICE threshold, indicating many of them are working, but not earning enough to afford basic needs. Blacks have the highest poverty rate of all races and ethnicities, according to the report.

"This should be informing us as a nonprofit community and as a public sector and even as members of this community of the work we have to do in diversity equity and economic inclusion, especially," the CEO of United Way of Frederick County Ken Oldham said. "Frederick County is not immune."

The United Way makes it clear that the ALICE report is an aggregation of data and not an exact way to dictate who is struggling and who is not. Individual circumstances will prevail, the organization says.

But the report does serve as a way to to chart the financial successes and challenges in a local economy.

"You see it time and time again," Oldham said. "Nonprofits are using this data to position their programs for success."

ALICE also offers employers a window into the issues that might be weighing on their workers.

"We have heard from company after company: [The ALICE report] lets us know why employees are living so far away or why absentees are so high or why our employees appear to be stressed," Oldham said. "Informed wage setting is a critical use of this [data]."

An economic step forward, then likely a step back

The welcome report this week about the improving economic status of the working poor in Frederick County was in some ways like a cruel joke, a…