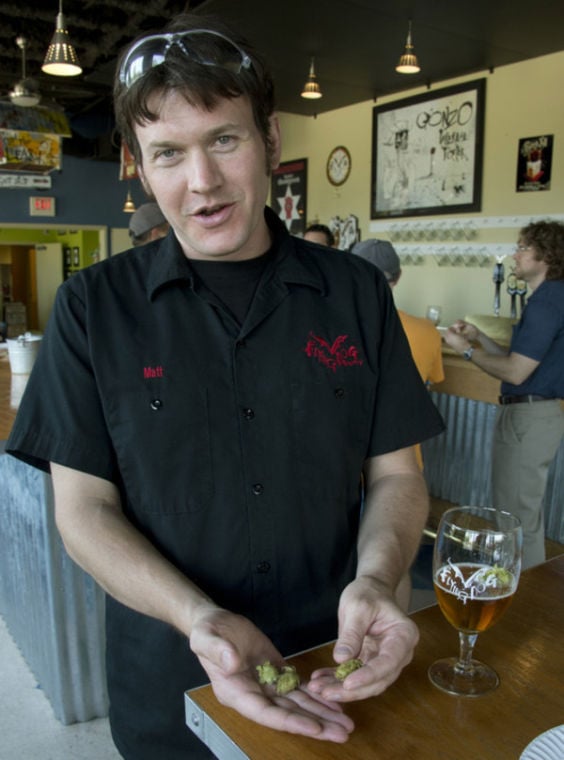 Flying Dog Brewery brewmaster Matt Brophy holds and talks about hops during a local hops selection event at the brewery recently. The local hops selected will be used in Flying Dog’s Secret Stash beer to be sold only in Maryland. 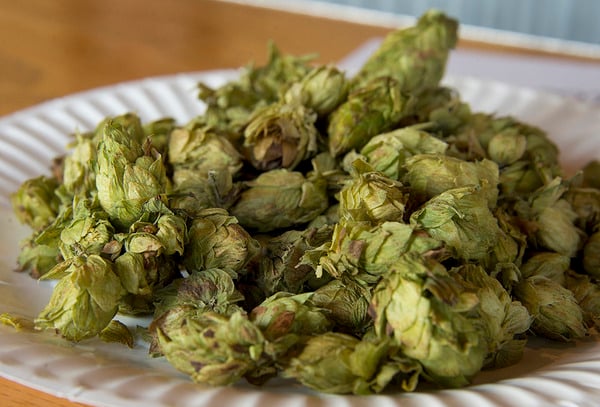 These are the Columbus organic hops brought to Flying Dog Brewery recently from the Sage Hill Hops Farm of Leesburg, Va., to compete in the local hops selection event.

Flying Dog Brewery brewmaster Matt Brophy holds and talks about hops during a local hops selection event at the brewery recently. The local hops selected will be used in Flying Dog’s Secret Stash beer to be sold only in Maryland.

These are the Columbus organic hops brought to Flying Dog Brewery recently from the Sage Hill Hops Farm of Leesburg, Va., to compete in the local hops selection event.

The drive from Oldtown to Frederick to participate in the first Maryland hop selection was worth the trip for Junior Carbajal and Dylan Krzywonski, hop growers at Organarchy Hops farm in Allegany County.

Local growers were invited to have their hops anonymously labeled for evaluation by brewmaster judges who also offered helpful feedback to the farmers.

“The reason we chose these hops is a combination of aroma and how the hops are processed,” Weston said. “Once hops are picked from the bine, they go through a delicate drying process, so we’re looking for hops with low moisture content, but are not overly dry.”

Growing hops is labor-intensive, and there’s not a lot of resources on the East Coast for hop growers, Krzywonski said.

“So there’s a lot of trial and error, but by far, it’s the most fulfilling job on the farm,” Krzywonski said. “Just being able to see something from start to finish and see the culmination of your hard work ends up in a glass that brings joy to so many people makes it worthwhile.”

Hops is an agriculture product, and Flying Dog is looking for the best quality hops, Brewmaster Matt Brophy said. Most of the company’s hops are from Washington state. Flying Dog used 200 to 300 pounds of Maryland hops this year to produce 150 barrels, or about 2,000 cases of beer. The company pays $7 to $12 a pound for hops. From grain to glass takes about three weeks.

Flying Dog Brewery supports and uses Maryland agricultural products in many beer concoctions, and the event was an effort to promote the Free State’s hops and growers, Brophy said.

“I’m noticing a lot of hop growers in Virginia and Maryland,” Brophy said. “We’re looking for best quality, and we want to support Maryland growers, but we don’t want to create the impression we’ll buy just any hops.”

The event was also about inviting conversation between brewers and hop growers, the brewmaster said.

With more than 2,500 craft beer companies in the country, the industry continues to grow, Brophy said.

Five years ago, Flying Dog had 26 employees. Today, that number is 82.

“Frederick turned out to be a great place to call home,” CEO Jim Caruso said. The plan is to expand the hop selection event to include other brewers and hop growers.

“They can use our space as the hop trading floor, similar to the Chicago Board of Trade,” Brophy said.

This article is about local agriculture, but I understand that reading is hard. Chill out and have a beer, but dont drive afterwards. Then tomorrow let everyone know if it was a positive experience.

More free advertising for the local beer distributors and suppliers, courtesy of the FNP. “It’s an explosive time in the craft beer industry,” Brophy said. Good for the drunkard population....bad for our problem with drunk driving, and the families and individuals who will fall victim this plague. Blood money.