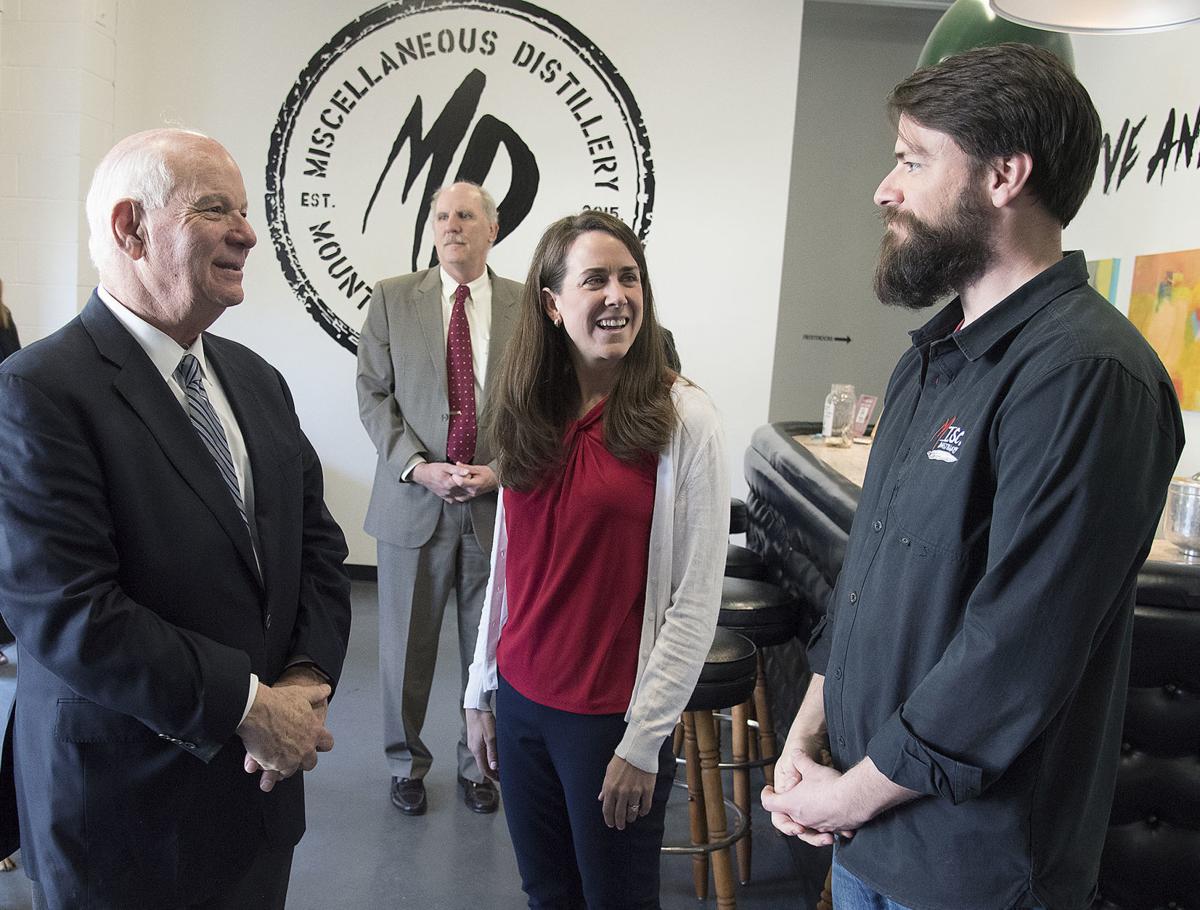 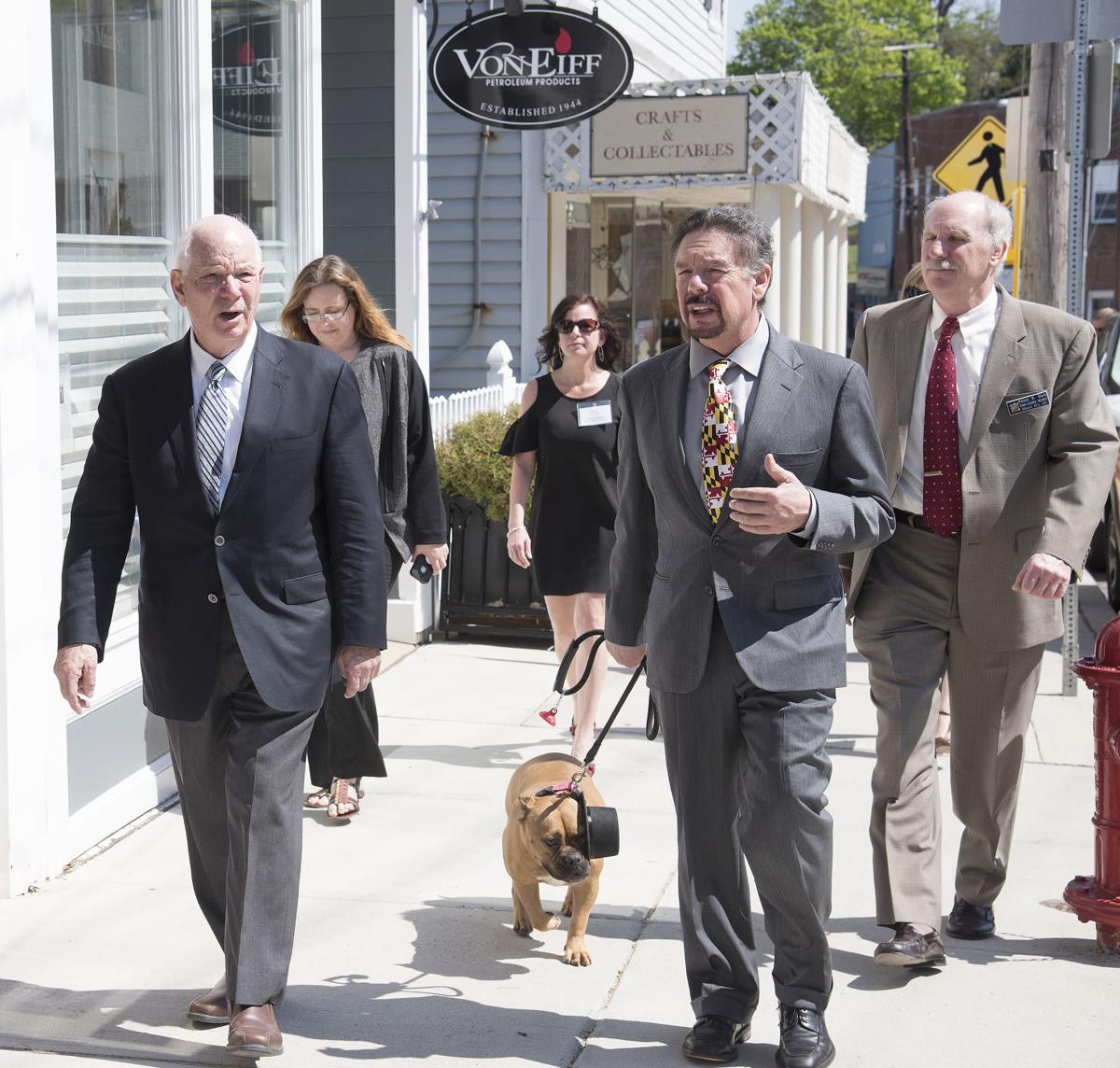 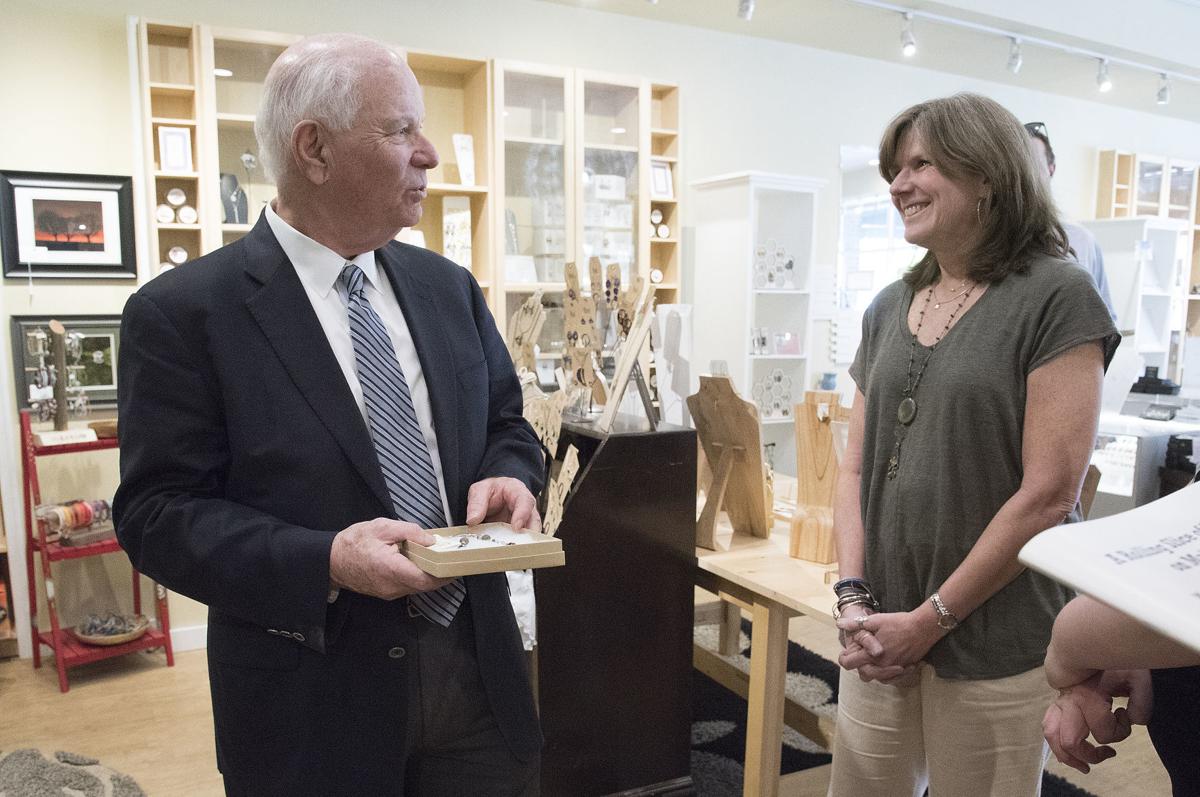 Sen. Ben Cardin, left, talks with Lisa Carnes, bench jeweler at George’s Girls Jewelry Wednesday, after Carnes presented Cardin with the a gift of an amethyst necklace she made for him. Cardin visited George’s Girls and other Mount Airy downtown businesses on a walking tour.

Sen. Ben Cardin, left, talks with Lisa Carnes, bench jeweler at George’s Girls Jewelry Wednesday, after Carnes presented Cardin with the a gift of an amethyst necklace she made for him. Cardin visited George’s Girls and other Mount Airy downtown businesses on a walking tour.

Downtown Mount Airy’s small shops and businesses along Main Street encourage all kinds of visitors, but they got a high-ranking one on Wednesday with a visit and tour by U.S. Sen. Ben Cardin.

Cardin (D-Md.) had come to town to celebrate National Small Business Week, which lasts until Saturday, and he visited several of the town’s shops.

He said he enjoys the opportunities that visits to different Maryland communities provide him to see the creativity and innovation that small businesses provide, Cardin said, after walking around the downtown area with Mayor Patrick Rockinberg and several Town Council members and staff.

He also came to talk to business owners about the issues and challenges they’re facing, with a view that’s not always clear from Capitol Hill.

At MISCellaneous Distillery, Cardin chatted with owners Dan McNeill and Meg MacWhirter about the distilling business and several issues affecting the alcohol industry in Maryland.

McNeill and MacWhirter described the processes of making various types of spirits, and discussed a reduction in the federal excise tax that people pay when they buy beer, wine or liquor.

“We worked hard to get that done,” Cardin said.

MacWhirter said they’re hoping to see the cut made permanent, and said they could spend the difference on expanding their business and hiring more people.

Cardin had a grasp of the various issues and legislation they talked about, and it was great to see him in Mount Airy and learning about the town, she said.

Laura Puls, one of the owners of the Main Street jewelry store George’s Girls, said she and the store’s other workers were excited about meeting Cardin when they heard he was going to visit.

It’s exciting to meet the person that you see on TV or read about in the newspaper, and Cardin was very personable, she said.

Puls and Cardin talked about how people pay no sales tax on online purchases, and the effect this has on local stores where customers have to pay sales tax, and he posed for pictures with the shop’s staff.

Issues such as tax laws and regulations are always a common topic at these kinds of events, as well as how shops can get more access to financing, Cardin said.

“Credit’s always a problem for small companies,” he said.

As the ranking Democrat on the Senate Small Business Committee, he said he sees small business as the backbone of the U.S. economy.

He said he wants to make sure that the federal government has policies in place that keep small businesses going, and wants to make it easier for people to come and enjoy places like Mount Airy.

“The Main Street here is really special,” he said.

Ashley Collier, the town’s Main Street manager, said she knows that Cardin has a definite interest in Maryland’s small-business community.

His visit gave them a chance to highlight some of their older and newer businesses, and she felt honored that he took the time to visit, she said.

“It really shows that he’s a man of the people,” she said.

It walks, it talks, it breathes! Ben Cardin ladies and gentlemen, let's give him a hand!

Must be an election coming up !! Cardin in Western Maryland !!