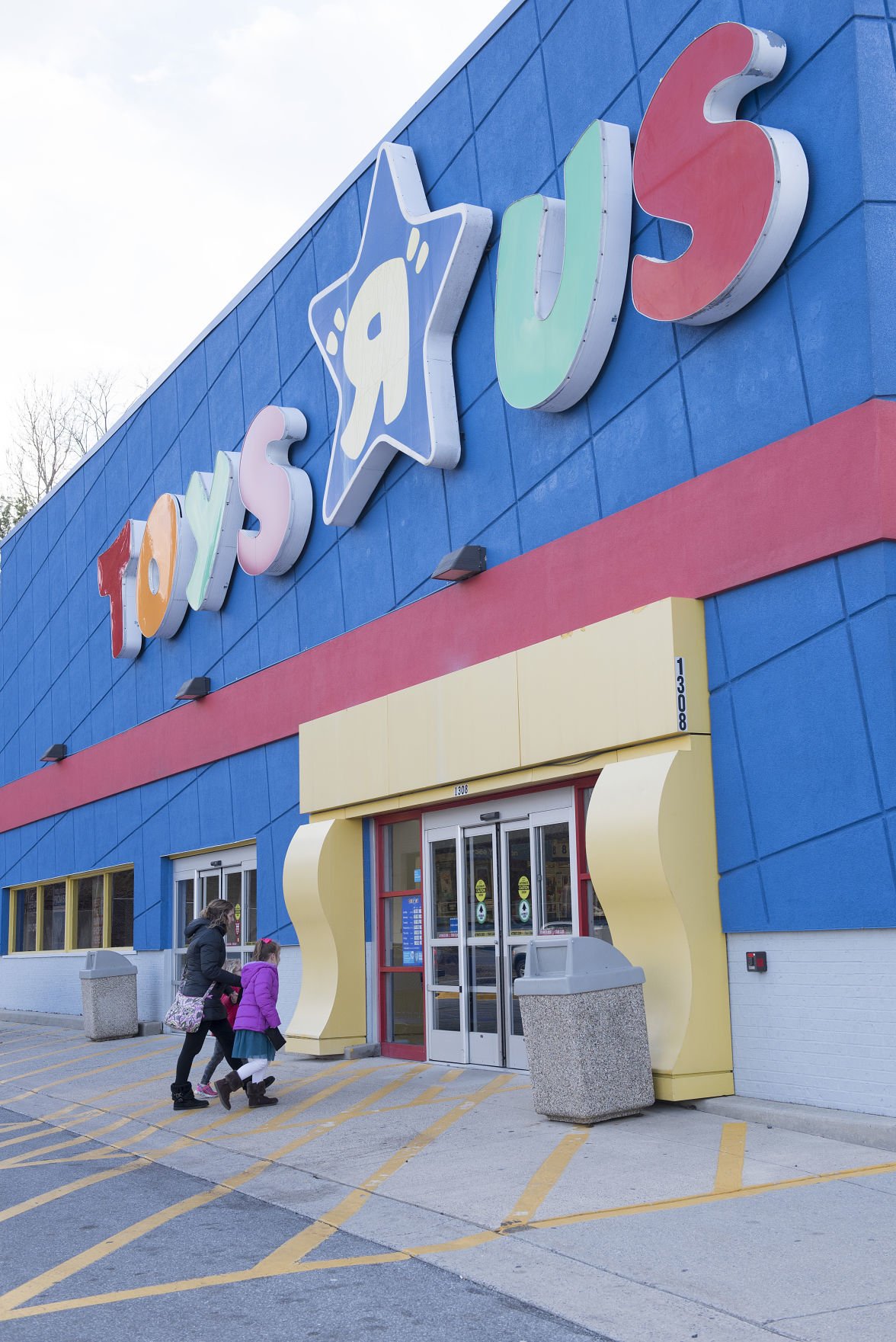 Shoppers on Thursday afternoon enter the Toys R Us store on West Patrick Street in Frederick. The company has announced it will close all of its stores in the U.S. 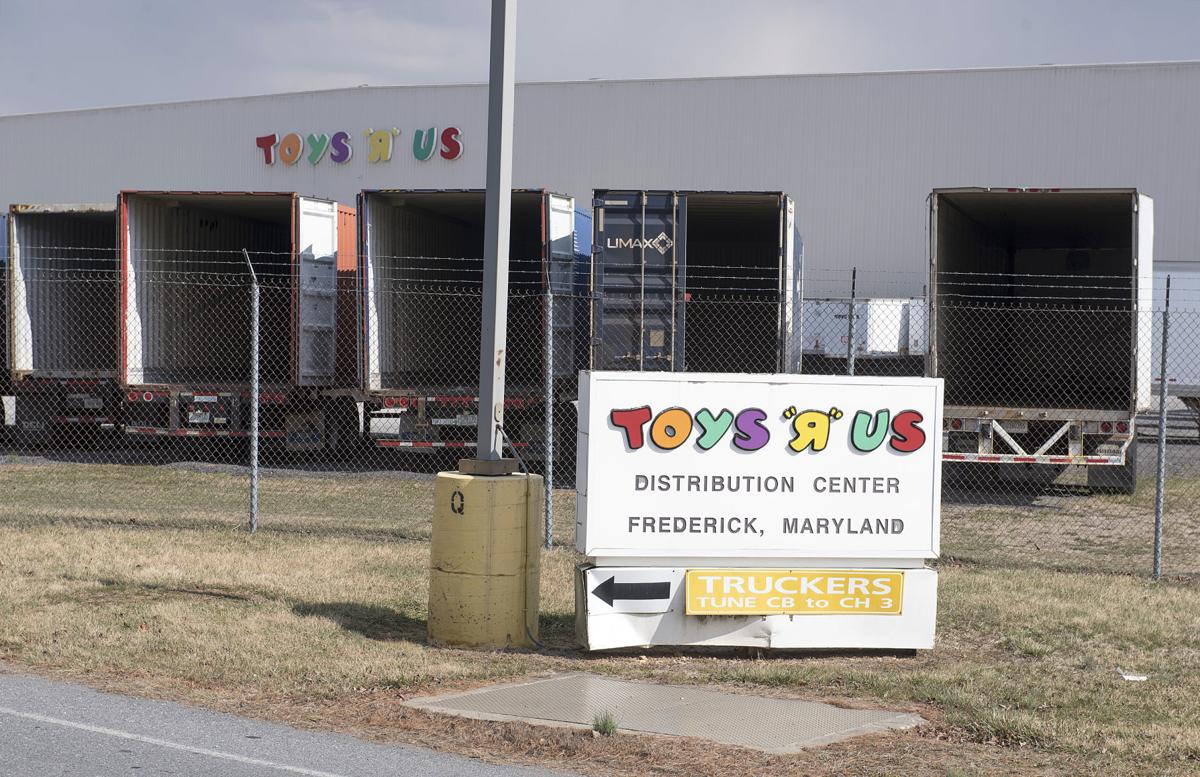 The Toys R Us distribution center on Thursday afternoon on Geoffrey Way off Md. 85.

Shoppers on Thursday afternoon enter the Toys R Us store on West Patrick Street in Frederick. The company has announced it will close all of its stores in the U.S.

The Toys R Us distribution center on Thursday afternoon on Geoffrey Way off Md. 85.

On Thursday afternoon, the day after it was announced that Toys R Us would be going out of business, things seemed routine at the store on West Patrick Street in Frederick.

The shelves were stocked with an assortment of toys and games, an inventory that has mesmerized kids for decades.

Anthony Vargas came to the store with his children Abram, 5, and Miri, 3, after he heard the announcement that the company would be liquidating its 735 stores in the United States.

“We thought, let’s check it out, see what they have,” Vargas said.

Going to Toys R Us, usually in the weeks before Christmas or a birthday, had always been a treat for him growing up, he said.

He’d seen the news in January that the chain was closing more than 180 stores and wondered about the Frederick location.

It survived that round of shutdowns, but on Wednesday, the news came that all the U.S. stores would close.

Toys R Us said in a news release that it would provide more details about the closing of the stores and going out of business “in the near term.”

The company announced on its website that gift cards and customer rewards programs will be honored for the next 30 days. Customers can also access any existing registries.

Along with the store on West Patrick Street, Frederick County is also home to a distribution center for the company, at 7106 Geoffrey Way.

The center employed 320 people at the height of the last holiday season, along with 35 at the West Patrick Street store, according to a release from Frederick County.

Nicole Hayes, a company spokeswoman, said in an email Thursday that she didn’t have information on how many employees the distribution center currently has.

Officials from Frederick County and the city of Frederick announced that they’re prepared to help employees from both facilities.

Michelle Day, director of Frederick County Workforce Services, said in a release that her office has contacted leadership at both Frederick facilities to help workers who will be looking for new jobs, including retraining.

The county will also have job fairs and other events to try to let those employees find jobs so they can stay in Frederick County if they wish, Helen Propheter, director of the county’s Office of Economic Development, said Thursday.

“We want to keep people here,” she said.

Frederick Mayor Michael O’Connor said in a release that the city is also prepared to help unemployed workers.

But officials in both jurisdictions were also turning their attention to dealing with the large real estate properties that will soon need to be filled with new tenants.

Propheter said she’s confident the county can find a user for the distribution space fairly quickly.

The site has good access to highways, and Toys R Us had a sophisticated computerized logistics system, she said.

“I think we can sell it very well,” she said.

Distribution is one of the county’s leading industries, and several companies are looking for facilities in the county, she said.

The city will work closely with the real estate community to fill the space on Frederick’s Golden Mile when it becomes available, Economic Development Director Richard Griffin said in the city’s release.

Griffin could not be reached for further comment Thursday.

Deb Reynolds, president of the Golden Mile Alliance, said in an email that her group was sad to hear that the store was closing, and were thinking of the employees who will lose their jobs.

“Fortunately, there are several stores on the Golden Mile that also sell baby equipment and supplies, as well as kids clothing, toys, books, and movies. We invite area shoppers to visit those stores,” she said in an email.

The alliance remains confident that the city is working to improve business and economic opportunities on the city’s west end, she said.

At the store Thursday, Tiffany Chaney, of Frederick, said she hadn’t heard about the closings.

She said her daughter Gabriella, 3, who was with her, loves shopping there.

“Her eyes just light up. She sees the name of the store, and she’s just gasping excitedly,” she said.

Chaney had great memories of going to the store as a girl with her mother or grandmother and being allowed to pick out a toy, she said.

“And it was just like this magical place,” she said.

Employees affected by the Toys R Us closures can contact Frederick County Workforce Services at www.frederickworks.com or at 301-600-2255.

Frederick needs an indoor play area or children’s museum for when the weather is bad. Please no more chains or malls.

“County officials eye options for Toys R Us properties as company announces closings” I don’t understand. Does the County or City official own these properties. The Frederick Town. Mall property sat vacant for years. What makes them think they can influence decisions for future plans for these properties?

I hope the city will do all it can to help get that property occupied.

unfortunately for some, everything stated or even thought is racist....thats what some resort to when they have nothing of value to add

So the county is checking this out; why not contact developer Kline; you know , the one the taxpayers kicked in $89 MILLION for an overpass and access to his NON-Tech park, where he now wants to place a warehouse operation amid single family homes ...this Toys R Us warehouse that will soon be vacant would be the perfect place, its already in an industrial part of town with 320 trained warehouse folks ready willing and able.....and unlike the "Park" it won't cost the taxpayers a penny....too good to be true which is why it probably won't happen

its not an industrial part of town and its commercial

I am definitely interested in occupying the premises and setting up a multi specialty medical clinic ..
Who do I contact ?

As a young adult I rode the el every day past the big Toys R Us sign on top of its beginning store in Phila. Then Geoffrey went nationwide and 25+ years later, I was the last of my friends to visit it for the effortless entertainment on boring rainy days.You don't get the same sensory experience ordering toys on a phone. Toy immersion is kid heaven.

Toys R Us closing its store has nothing do with local issues, read the article, they're closing ALL of the stores. Read before commenting dummy.

That is so sad. Many happy memories of taking my kids to Toys R Us.

right you are and destroyed by the likes of Bezos while he creates a new lifestyle.....

Just like Macys and shopping malls destroyed Sears catalogue sales with Wells Fargo delivery service. We move forward. Our shopping preferences change. Who are you to tell people they shouldn’t shop online?