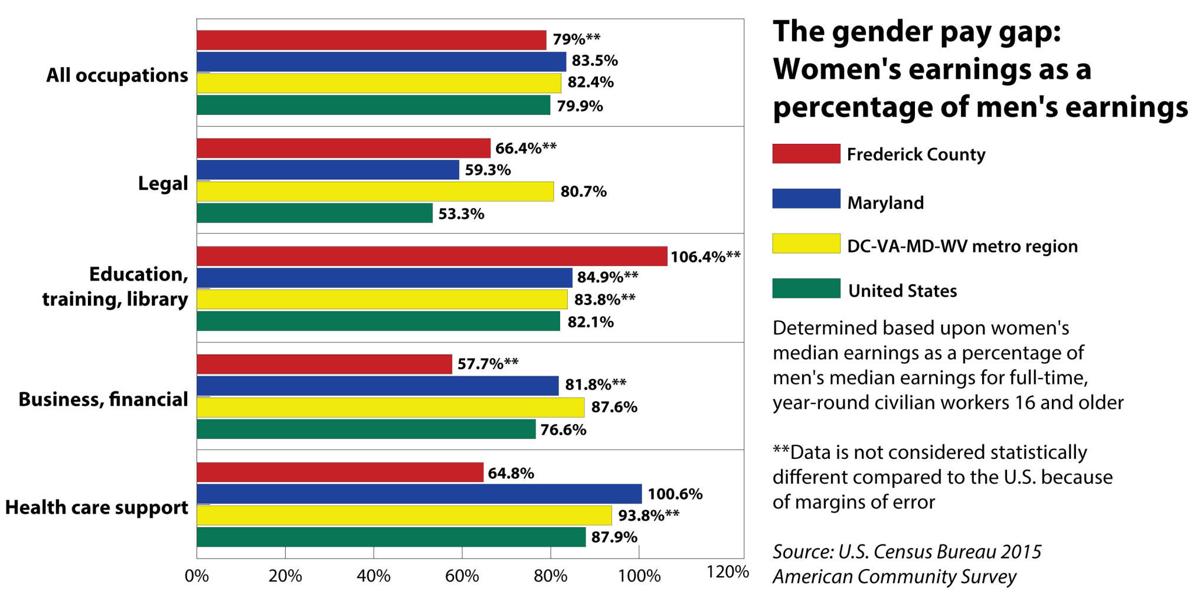 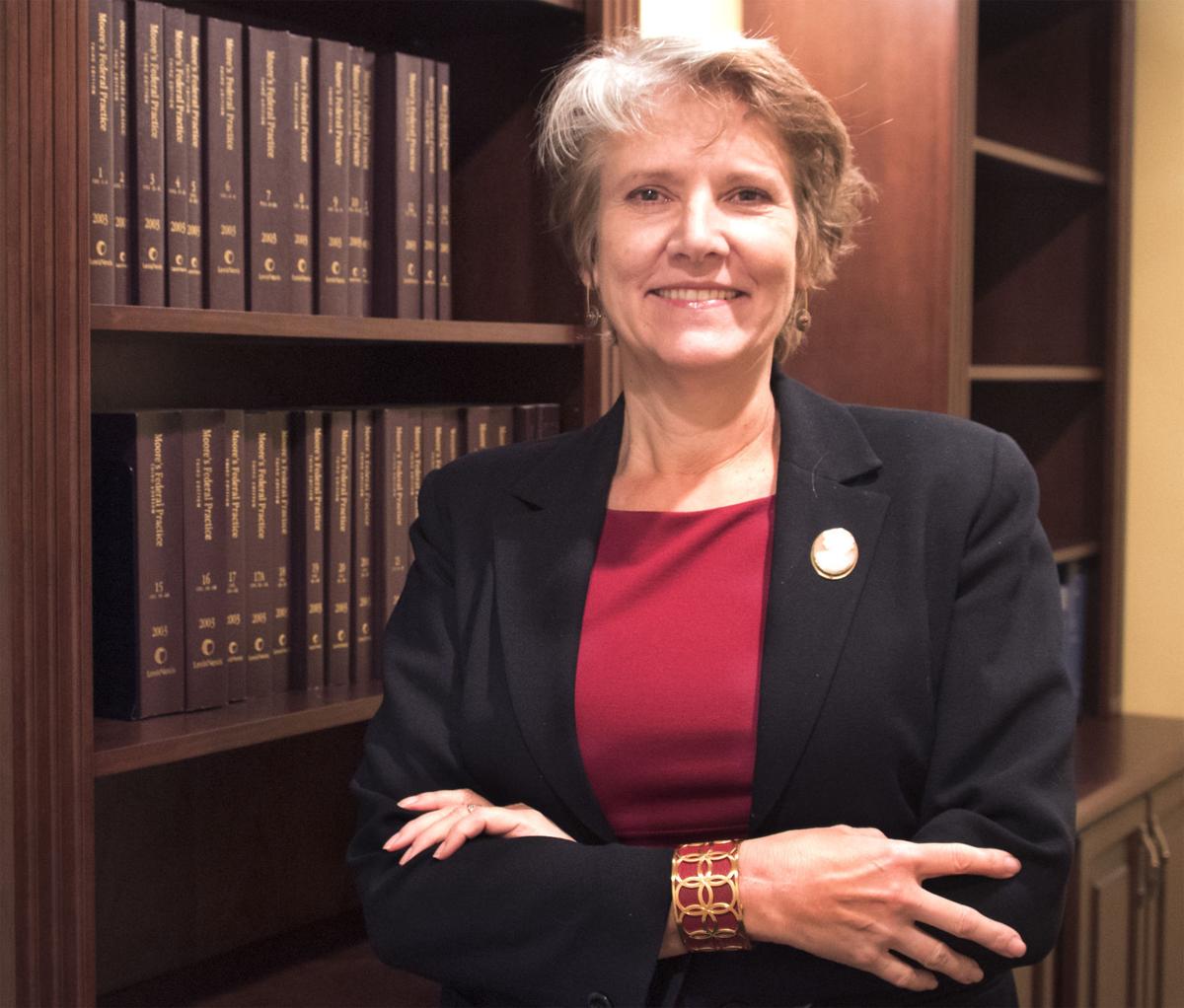 Leslie A. Powell, managing partner of Powell Flynn LLP, has been practicing law for more than 30 years and says she has never experienced pay discrimination.

Leslie A. Powell, managing partner of Powell Flynn LLP, has been practicing law for more than 30 years and says she has never experienced pay discrimination.

Despite significant advancements in women's salaries, pay disparities persist between men and women, evidenced by the oft-cited statistic that women workers earn 80 percent of their male peers' earnings.

This measure is based on 2015 median income estimates by the U.S. Census Bureau. But Maryland, and this region more broadly, boast slightly more favorable outlooks for women workers, according to the same measurement of earnings.

In the D.C. metro region, which includes parts of Maryland, Virginia and West Virginia, women earned 82 percent of what men make, according to 2015 Census data. And in Maryland, a woman earned 83 cents to a man's dollar, the data showed.

The bill sponsored by Delegate Karen Lewis Young, D-District 3A, passed in the House of Delegates 94-7 this week.

If women and minorities are historically paid less, one way to balance pay scales could be to take past salaries off the negotiating table, Lewis Young said.

The Census Bureau's measure of median income is widely cited when discussing gender pay disparity. It's a good benchmark, particularly to compare current disparities to historical ones, according to Erin George, an assistant economics professor at Hood College who studies gender disparities in the labor market.

But the measurement, like most data, doesn't tell the whole story.

It doesn't differentiate the income gap across different races and ethnicities, for example. This is an important distinction because minority women face an even larger income gap, George said.

The statistic also doesn't take into account what George termed "occupational segregation" — namely, women tend to work in industries and jobs that pay less than some other fields.

Females who enter legal occupations, which include more than just lawyers, also face a larger wage gap. Frederick County women in legal occupations made 66.4 percent of what their male peers did in 2015, Census Bureau data shows.

Leslie Powell, a managing partner with Powell Flynn law firm in downtown Frederick, said she has never considered herself a victim of pay discrimination because of her sex. She knew how much her male coworkers made, even before she opened her own firm, and said salaries were based upon experience and performance.

"You didn't get special dispensation as a man or a woman," she said.

She also didn't think the legal field in Frederick County was dominated by men, nor that her male peers had any kind of advantage over her because of their gender.

In contrast to that for legal professions, data about library science indicates a female majority. In 2015, 80.7 percent of librarians nationwide were women, Census Bureau data showed.

A female-dominant field may also affect the earnings in favor of women. Frederick County women in teaching, training and library occupations earned 106 percent of their male peers in 2015, according to Census data.

Sheila McDuff, associate director for public services for Frederick County Public Libraries, has worked alongside mostly women since earning her master's degree in library science 16 years ago. Her academic programs for the degree were also dominated by female students, she said.

But like Powell, she named experience and education as the driving forces behind pay, not gender. Public libraries are usually government-run institutions  — the Frederick County library system falls under the umbrella of county government — which means income is set by a regulated scale based on education and experience.

George also named years of experience as a variable not considered in the blanket statistics on the gender pay gap, as well as factors such as marital status and education levels.

Even accounting for these variables, though, about half of the wage gap remains, George said.

The glass ceiling is defined by the United States Federal Glass Ceiling Commission as "the unseen, yet unbreachable barrier that keeps minorities and women from rising to the upper rungs of the corporate ladder, regardless of their qualifications or achievements."

Among the chief causes for the glass ceiling is something George termed the "mommy penalty."

Women with children might see earnings decrease, while men with children experience pay increases because of inherent bias that motherhood and professional responsibilities somehow conflict.

This assumption features most prominently among occupations with demanding, hectic schedules such as legal and business professions, George said. Lawyers seldom have the option to work fewer hours, or on a part-time basis.

Powell agreed that long hours were a requirement for her job.

"You don't hear about a lawyer who works 10 hours a week," she said.

But demanding hours didn't dissuade Powell from giving up her career to be a mother. She did both.

The mother of two had her first child the same year she made partner at her firm. Two weeks after giving birth, she was in D.C. for a meeting. Asked if she felt like she faced bias as a mother in a demanding career, she said "possibly. But I just did it."

Other careers better accommodate women who want to work part-time, or take time off. George named pharmacists as one example, particularly those who work for corporations such as CVS that offer rotating pharmacists behind the counter.

"When I go to get a prescription, I don't care if it's the same pharmacist I saw before or not," she said.

McDowell said she knew many women in library occupations who took time off to have children. Some, like her, came back immediately at the end of their allocated maternity leave.

Those who waited longer before returning to their workforce weren't penalized though, she said. "As long as you still have the skills you need to do the job, in my experience it doesn't make much of an impact," she said.

Sexual harassment and hostility can also play a role in the glass ceiling effect. Wall Street, for example, is known as an unfriendly environment toward women, George said.

The prospect of facing workplace harassment and hostility may dissuade women from entering those fields altogether, keeping them more male-dominated.

The "lean in" factor highlighted in Sheryl Sandberg's book by the same name might also affect women's earnings compared to men. Sandberg in the book argues that women need to "lean in" to their own advancement by advocating for raises and negotiating salaries. Sandberg also challenges women to face the fear of being perceived as bossy.

If passed into law, the bill would put Maryland among a small group of states and cities that have passed similar measures, including California, Massachusetts, New York and Philadelphia. Lewis Young said the measure is perceived by womens’ groups as the second-strongest measure in the country, behind Massachusetts.

Lewis Young said the bill will help ensure that lower wage levels for women and minorities are not perpetuated when employees are required to reveal past compensation.

“Your current compensation shouldn’t be based on a past or irrelevant position,” Lewis Young said.

Employers who have job openings, Lewis Young said, know the amount they’re willing to pay for the position without knowing ahead of time the past wages of any applicants. That’s what should drive salaries, she said.

“If you pay people what they’re worth, what the job requires, you get good employees, who are committed and loyal and treat your customers well,” Lewis Young said.

But the bill has been scaled back from its original form. Lewis Young’s bill originally required employers to post salary information as part of job announcements, which would bring greater transparency to salary levels for all workers. But business groups opposed that provision in part because it would allow companies to get an inside glimpse at their competitors. Those requirements were amended out of the bill.

A cross-filed version of Lewis Young's bill in the Maryland Senate has not yet advanced out of committee. Her bill will get a Senate committee hearing later this month.

Asked what other policies governments could help equalize earnings between men and women, George emphasized the importance of policies that allow paid family leave. Maryland ranked first among the states for the best paid family leave law, according to an analysis of women's advancements published in 2013 by the Center for American Progress.

Maryland also claimed the No. 1 spot overall in terms of economic benefits for women, based on criteria that included the wage gap, poverty levels and and the wage gap among minority women, the report stated.

Powell maintained that closing the remaining income gap couldn't be achieved through law or policy alone. She named shifting cultural and societal norms as the key factor for equal pay.

"The law tends to follow the thinking of society," she said. "It's an organic process."

ANNAPOLIS — If women and minorities are historically paid less, one way to balance pay scales could be to take past salaries off the negotiati…

If they are not being paid equal pay. The answer is simple they should move to areas that are paying equal pay.

It's sad to see this wonderful newspaper fall to the bottom and post fake news. The wage gap has been debunked so many times but it continues to rear its ugly head due to stories like this one.

Equal work for equal pay is an important goal but the median income stat has nothing at all to do with that or with discrimination. This article seemed to agree that the wage gap was due to discrimination against women but the fact is that this simply does not exist. Read Warren Farrell's 2005 "Why Men Earn More: The Startling Truth Behind the Pay Gap -- and What Women Can Do About It." This book dismantles the wage gap idea, (as many others have since then) and shows clearly that the differences in pay are related to choices made by both men and women. Women choose comfortable work, safe work, day work, family flexible work, etc. and those jobs they seek tend to pay less. Men work more overtime, work dangerous jobs (yes, men are 93% of workplace deaths) jobs that are messy and unpredictable, jobs that are physically demanding and on and on. College graduate females actually make more than college graduate males and this trend continues until the women have children. And yes, those who take time off, whether men or women, will be penalized for their decreased experience and continuity.

I am hoping this paper can do the right thing and admit their errors and do an article that clarifies with proper research and support which you will find in the Farrell book and many others.

The source is the Census Bureau.

The problem is not with the source nor the stat. The problem is that the median income stat has nothing to do with discrimination and the article implies that it does. This perpetuates the myth that women are paid differently from men for the same work.

Good information, tg, never thought about most of that. Could you not also add the fact women are in and out of the work place due to moving and child birth? And time off for child birth is going to impact any employer who has to replace a valuable employee with a temporary employee.