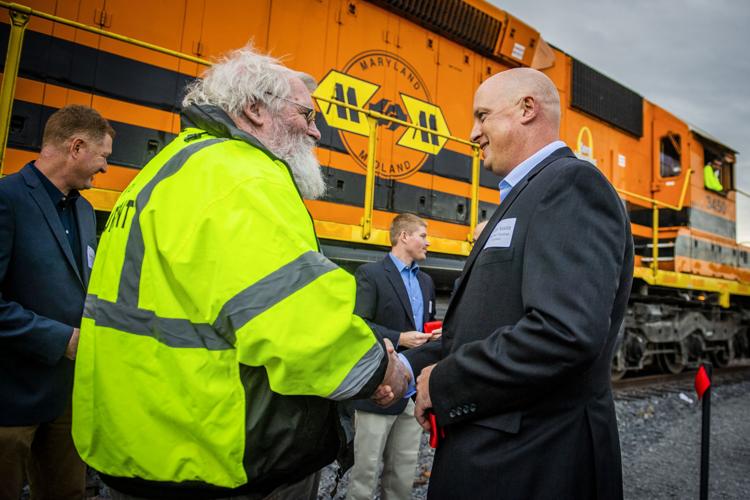 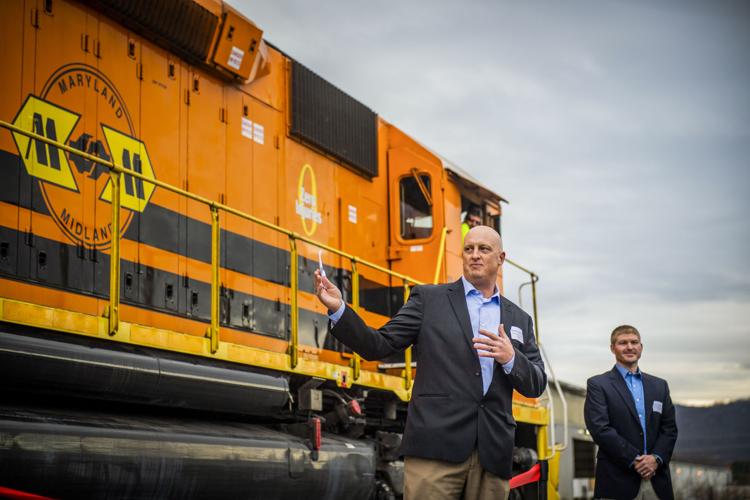 Scott Austin, CEO of Structural, LLC and Maryland Transload Logistics, speaks about the company’s new rail-to-truck reloading and transferring facility in Thurmont Thursday. This facility will allow the company to easily ship items across Maryland, Virginia and Pennsylvania. 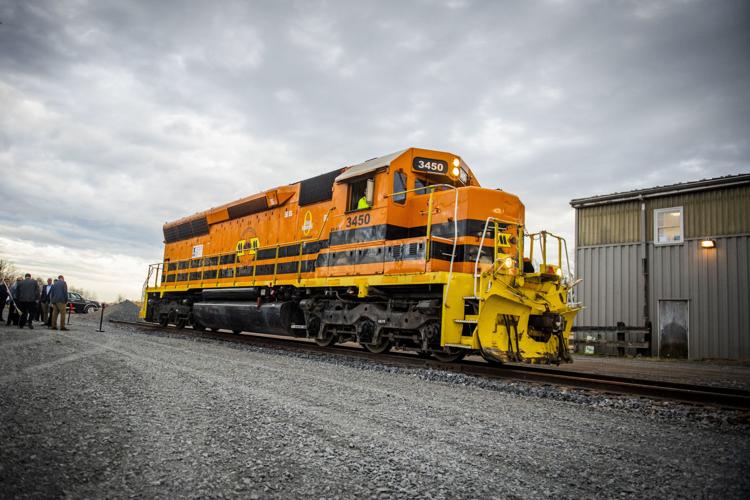 A train departs from a new rail-to truck reloading and transferring facility, established by Structural, LLC, in Thurmont on Thursday. This facility will allow the company to easily ship items across Maryland, Virginia, and Pennsylvania.

Scott Austin, CEO of Structural, LLC and Maryland Transload Logistics, speaks about the company’s new rail-to-truck reloading and transferring facility in Thurmont Thursday. This facility will allow the company to easily ship items across Maryland, Virginia and Pennsylvania.

A train departs from a new rail-to truck reloading and transferring facility, established by Structural, LLC, in Thurmont on Thursday. This facility will allow the company to easily ship items across Maryland, Virginia, and Pennsylvania.

The sound of trains will soon be more common in Thurmont, as Maryland Transload Logistics plans to usher in a simpler way of shipping goods between Maryland, Pennsylvania and Virginia.

The company held a ribbon-cutting ceremony on Thursday at its headquarters on 201 Poplar Ave. in Thurmont. Scott Austin, president of Maryland Transload Logistics, or MTL, said trains will arrive at the facility carrying goods to be loaded onto trucks, or vice versa.

Austin said there’s a simple benefit to shipping this way:

“Things ship cheaper via rail,” he said. “But not everybody has access to rail.”

Austin, who is also the president of building product company Structural LLC, also located at the Poplar Avenue site, said he saw the opportunity to install a rail spur at the Structural site.

“People will ship stuff via rail to our reload, with ‘reload’ meaning we’ll unload it, put it on a truck, and ship it locally,” he said, breaking MTL down into its simplest terms. Austin said this will decrease the total amount of time products shipped either to or from Maryland, Pennsylvania or Virginia have to spend on trucks, shifting the load to rail.

“Getting commercial commodity products off of the road and onto a train that ships overnight is huge,” Austin continued.

The MTL will be serviced by the Maryland Midland Railway, part of the Genesee & Wyoming rail company. Joe Arbona, assistant vice president of government affairs for Genesee & Wyoming, agreed with Austin’s assertion that rail is cheaper, arguing it brings the overall cost of shipping down by reducing fuel costs significantly.

“A railroad can move a ton of freight 480 miles on one gallon of fuel,” he said. “One train of 100 cars can take around 280 trucks off tax-supported roads.”

The plans for MTL began in March 2019, with Austin explaining that things moved quickly, saying Genesee & Wyoming helped push the project along.

“[They] identified this as a reload point, and they were the ones that were pushing it; they wanted to have it fast once they recognized the opportunity,” he said.

According to Austin, Thurmont as a community was very welcoming to the project, something that was backed up by comments during Thursday’s ceremony from the town’s mayor, John Kinnaird. A longtime member of the community, Kinnaird said trains were once a frequent sight in Thurmont, shipping coal east toward Baltimore and military products westward.

“I remember when the trains started slowing down … and then one day, there were no trains,” he said. “Trains to me always showed vitality and a strong economic base.”

Kinnaird said he lives close to the tracks, and he loves hearing the sound of the trains coming through.

“The more trains I hear coming by here, I think it’s better for all of us and for the economy, especially for the town of Thurmont,” he said. “Thank you, Scott, for having this dream and making it come true.”

Tamar Osterman, who represents the Maryland Department of Commerce for Frederick and Carroll counties, called the facility’s opening incredibly exciting, saying she was involved with the process of introducing Austin to Maryland Midland Railway. According to Osterman, MTL is the first transloading facility in Frederick County. But she said she and others in the department have another name for it:

“We decided this is Maryland’s new inland port,” she said during the ceremony. “This is really the heart of what economic development is all about.”

According to Austin, shipments to the facility will begin in the early 2022, and he expects this will create a number of jobs. Austin said there are already plans to expand the rail spur to provide more shipping service after they begin.

Amazon hub next? Currently I've noticed packages go from BWI to Hanover PA then back to MD. The only thing I want coming out of Hanover, PA is pretzels.

This means more trucks in Thurmont! We need an alternative route for these big trucks getting into and out of Thurmont. Carroll Street is already in poor condition from the NVR trucks.

What alternative route would you suggest? Carroll Street may be in poor shape from Woodside Ave. to Apples Church Rd., but it is considered the "industrial" part of town and truck traffic is to be expected.

I wish I had known that the East end of Thurmont is an industrial park before I relocated here. To answer your question, many years ago Thurmont had a plan for a bi-pass around Thurmont for truck traffic from NVR. I think we need it now more than ever. I am seeing these big trucks all over town, not just on Carroll Street. They are getting hung up at the square, they are using Rt. 550 East to enter and exit Thurmont, traffic gets stopped at the Church Street to Woodside turn, etc. and all the signs are not helping. The intersections were not made for this type of traffic.

There are several signs around, including in Thurmont and out on Rt. 15, identifying the town's industrial area so I think my question to you would be did you move to where you now live before they were put up? And it's really not much of an industrial area at that, there's only three businesses that currently constitute it; RR Donnelley, NVR, and Structural, LLC. They, and the railroad tracks, should have made it obvious. As far as Thurmont's plan for a bypass, I believe this is what you referring to:

You'll note that the plan was to extend Seiss Road to U.S. 15. When I look on Google Maps, the first thing that comes to mind is "What???" That "plan" tells me pretty much nothing, and leaves a lot of unanswered questions. Like what is the proposed route to get to Seiss Road? What is the proposed route from the Seiss Road/Apples Church Road intersection? How long would it take to get landowners to sell land necessary for the project? Is this to involve a cloverleaf interchange at Rt. 15 in order that trucks can safely get on and off that highway? And where would that interchange be located? And, the primary questions are how much would all this cost and where would the money come from? The town certainly can't afford it on its own, and I highly doubt the state would see it as a priority. Maybe a couple/few decades in the future, but it not in the foreseeable. Besides, a bypass is not going to keep trucks from delivering from where they need to, if their destination is other than the industrial area.

As far as the town square goes, trucks over 40' in length are forbidden to make turns at it, signs are posted from each direction stating so, and I rarely ever see any trucks even passing straight through. Only once have I ever seen one driver try to make an illegal turn, from westbound Main onto northbound Church and, when I pointed it out to the driver that he was attempting an illegal maneuver, his English was so bad that I couldn't understand his reply. That made me question his ability to read basic road signs. As far as trucks using 550 to enter and leave the town, that is the route the town designated to access and depart the industrial area. I do agree that the intersections were not made for this type of traffic. Thurmont was founded as "Mechanicstown" in 1751 and the roads were made for horses, buggies, and horse drawn wagons. Personally, the trucks don't bother me. I give them leeway when they need it and, if it helps keep Thurmont just the way it is, I'm all for it. The last thing we need is for the town to get trashed the way so many other small towns in this county have.