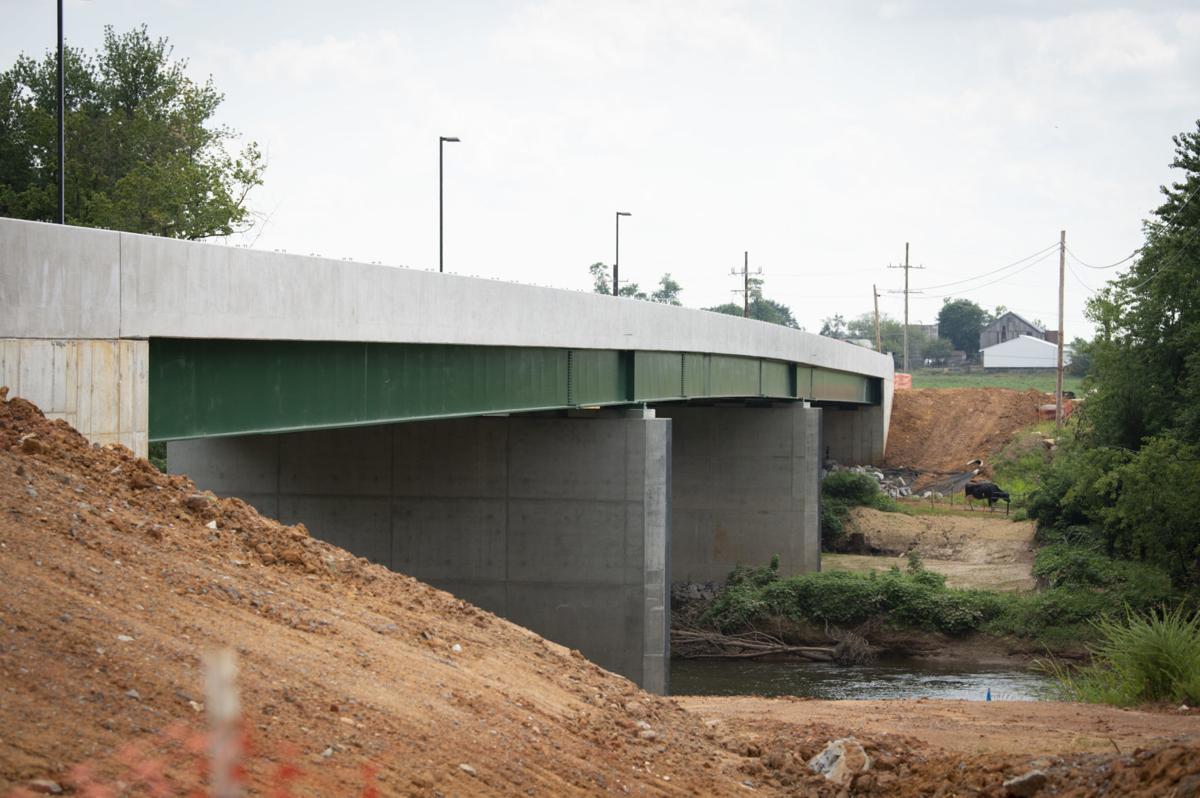 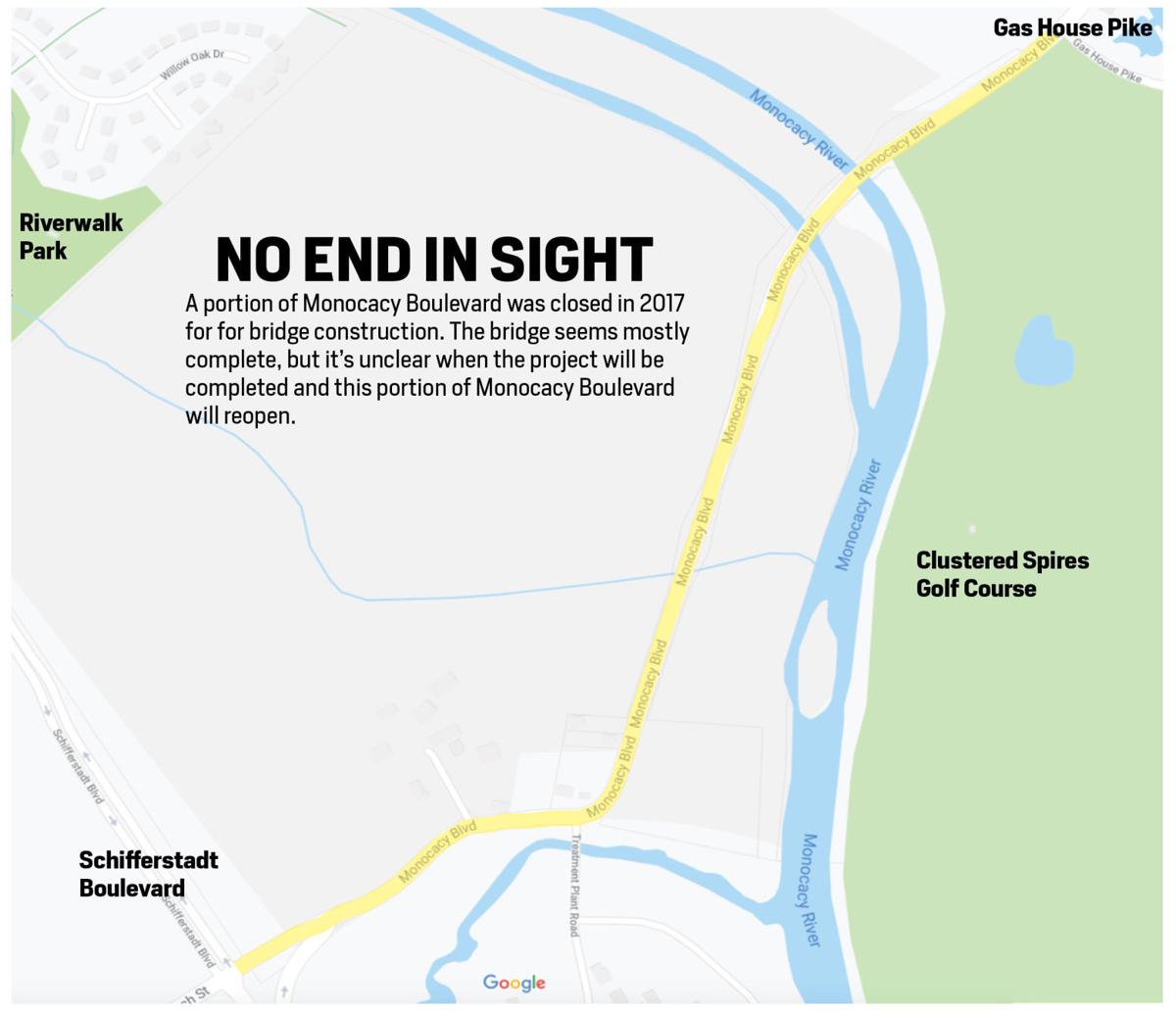 When a section of Monocacy Boulevard was closed in October 2017 to widen the road and add a second bridge over the Monocacy River, the hope was that the 18 months scheduled for the project would ultimately be irritating but rewarding.

Now more than three months past the scheduled completion date, the project at the site between Gas House Pike and Schifferstadt Boulevard and East Church Street in Frederick is a frustration for drivers trying to get from the southern to the northern side of the city. The closed stretch effectively cuts off parts of the city from each other.

Now, with no date set for completion, there’s no clear answer to why the project is far from being finished.

The Monocacy Boulevard project was originally supposed to reopen in April, but by May, city officials were hoping for an opening in late July or early August.

The project is expected to widen about 3,550 feet of the road to a four-lane arterial road, add a new traffic signal at Monocacy Boulevard and Gas House Pike and construct a second bridge adjacent to the existing one over the Monocacy.

But there are still a number of things to do before the road can be opened to traffic, including completing a section of gas line and a segment of water line, filling in areas for the road behind a retaining wall and near the bridges, paving, curb and gutter work, sidewalks, streetlights and other details, Tracy Coleman, deputy director of public works for engineering and operations for the city of Frederick, said Thursday.

The city is working through some “issues” with Washington-based contractor Milani Construction, including a more realistic, hard-and-fast schedule for the project, Coleman said.

“As far as opening the road, I can’t give a hard date yet,” she said.

Coleman would not elaborate on what the issues were, and Milani did not return calls seeking comment on Thursday or Friday.

When a project is bid, the city’s hope and expectation is that it will be finished when the contract says it will be, Frederick Mayor Michael O’Connor said Friday.

When that doesn’t happen, it’s disappointing, he said.

Meanwhile, the city is working as hard to make sure that the project is done as soon as possible, and is pursuing all of its options to ensure compliance with the contract that both parties agreed to, O’Connor said.

This isn’t the first time the Monocacy Boulevard project has run into controversy.

The project had a troubled history even before it began. It had to be rebid in August 2017, after the first round of three bids all came in higher than the anticipated cost of $16.7 million. The second round of bids ranged from Milani’s $21.8 million to $24.5 million by a Gaithersburg firm.

While the closed road has been frustrating for drivers and city officials, the disruptions it has caused have also been difficult for businesses.

Rick Weldon, president and CEO of the Frederick County Chamber of Commerce, said he hears from numerous chamber members around the work area whose business has been affected by the project.

“It’s a huge, huge impact to those businesses,” Weldon said.

The work has to be having an impact on people getting to and from work, Weldon said.

Once an employer starts wondering about why they’re in a location, they may consider moving, Weldon said.

Tim Guinan, owner of Otherworld Fitness on Spires Way, said the closure has been frustrating for his business, which opened in August 2018.

Numerous studies have reported that people won’t travel more than 15 minutes to get to a gym, Guinan said.

The road closing has essentially cut him off from people in the southern part of Frederick, he said.

“When people have to go 20 minutes around [a detour], they’re not coming here,” Guinan said.

O’Connor said he hears from residents regularly asking when the project will be done.

The eternal construction project on Monocacy Boulevard, which has paralyzed traffic on the east side of Frederick for almost two years, has bl…

And Who is the Architect. They own this for not closing the loop.

What part of Liquidated Damages on a contract does the City not understand. Put a completion date in the bid specs and make the successful bidder toe the line, or lose money. If the contractor keeps demanding Change Orders for more money, the entire project should be audited. There's no reason, lacking a catastrophic flood, that a professional firm cannot meet a schedule. [thumbdown]

L.Ds. for failing to meet a completion date are a construction industry standard. I’d like to think they were included in the contract. If not, someone is an idiot.

Please make this bridge and road opening a bigger priority. This impacts traffic all over Frederick.

The mayor actually said that when a contract isn't lived-up-to it's merely "disappointing"?!

The worst part of the road closure for the residents off of Schifferstadt is the increased traffic - tractor trailers and dump trucks. Plus, none of the vehicles obey the 25mph speed limit. If you try to cross the street even at a cross walk, you take your life into your own hands. I have never seen a vehicle stop for students try to cross on their way to TJ HS. I would love to see a 4-way stop at 16th St. and Schifferestadt. It is long over due.

this is what happens when City leaders get in a big hurry not crossing their T’s & I’s. Contractors will take advantage of the situation. Did they save any time? Does appear so. Priorities messed up too. New logo and official ice cream.

Why doesn't the city put financial penalty contingencies in the RFP encompassing the completion date. In other words, finish on time your ya get hit in the wallet. Between this and the logo, the procurement office needs new leadership, oversight and processes.

This is nothing more then incompetent city leadership.

We hardly ever get more than we pay for and often do not even get that much.

Low bid construction & lack of adequate contract provisions for completion date likely led to this fiasco. But, for City officials not to have an completion date is completely unacceptable. There's more to this story that's not being released or told.

Rock, you are right, every contract should have a completion date and for a City contract, should have had penalties if that date was missed. That way, no contractor will underbid, hoping to save money by getting the cheapest labor and not paying for longer work days.

Other then Russell, none of the aldermen have any idea what they are doing. Crazy Donna is just off the wall and way over her head, Mcshay and Wilson are only concerned with social justice and hate the police, Shackelford has done literally nothing but get arrested.

I like the Alders. Who did you vote for?

No suprises here. Remember, this is a city that flushed $45K to Jacksonville, FL to develop a logo of a constipated parrot squawking in pain. But when it comes to critical transportation infrastructure, the city has no idea for a completion date. Ridiculousness.

It is easy to see where priorities lie here and where valuable project planning time is spent by city officials. A logo alongside critical road improvements. The mayor, although I like him, just keeps on digging a bigger and bigger hole for himself. Whether to nowhere or to China, his digging is really getting deeper.

Little Leaguers have no field to play on due to flooding issues. Trees overgrown in numerous places. Sidewalk cracks and holes in places. Road painting needs in many places. Pay for street parking everywhere. And now a major road infrastructure project with no end in site? Taxpayers, neighbors and friends getting more and more disgusted. Where is the leadership? The accountability? The common sense and stewardship of our precious tax dollars? City Council needs to wake up!

Why didn’t the contract have any liquidated damages for schedule non-compliance? If you want something done on-time this is what you do.

I was thinking the same thing Bunny. Add a carrot for finishing early and under budget. Then add a big stick penalty for finishing late or over budget. You'd be amazed how many projects finish early or on time.

This is unbelievable. Isn't there an estimate on when this project will be finished and open for traffic? What penalties are the city putting on the contractor? No end in sight is not a good answer.

Penalties need to be in the bid documents. You can't tag them on later.

Zack Kershner is this man qualified to do all this

I certifiable don't think so. Adkins well how long has he been mismanaging the city . The Loser mayor and his gang strike again. The commuter lot over by Christophers Crossing flooder a month after being built the FLOOD PREVENTION WAS FLOODING. At some point you have to hire more qualified planners City of Frederick Grow up.

There is a "Monocacy Blvd. Park and ride" lot. Is that your reference? I never knew if flooded. But I do not go that way very often.