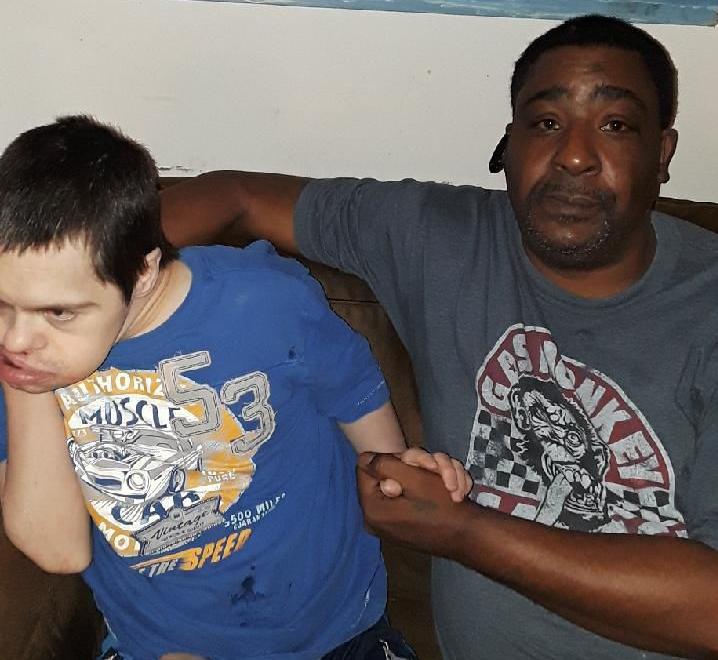 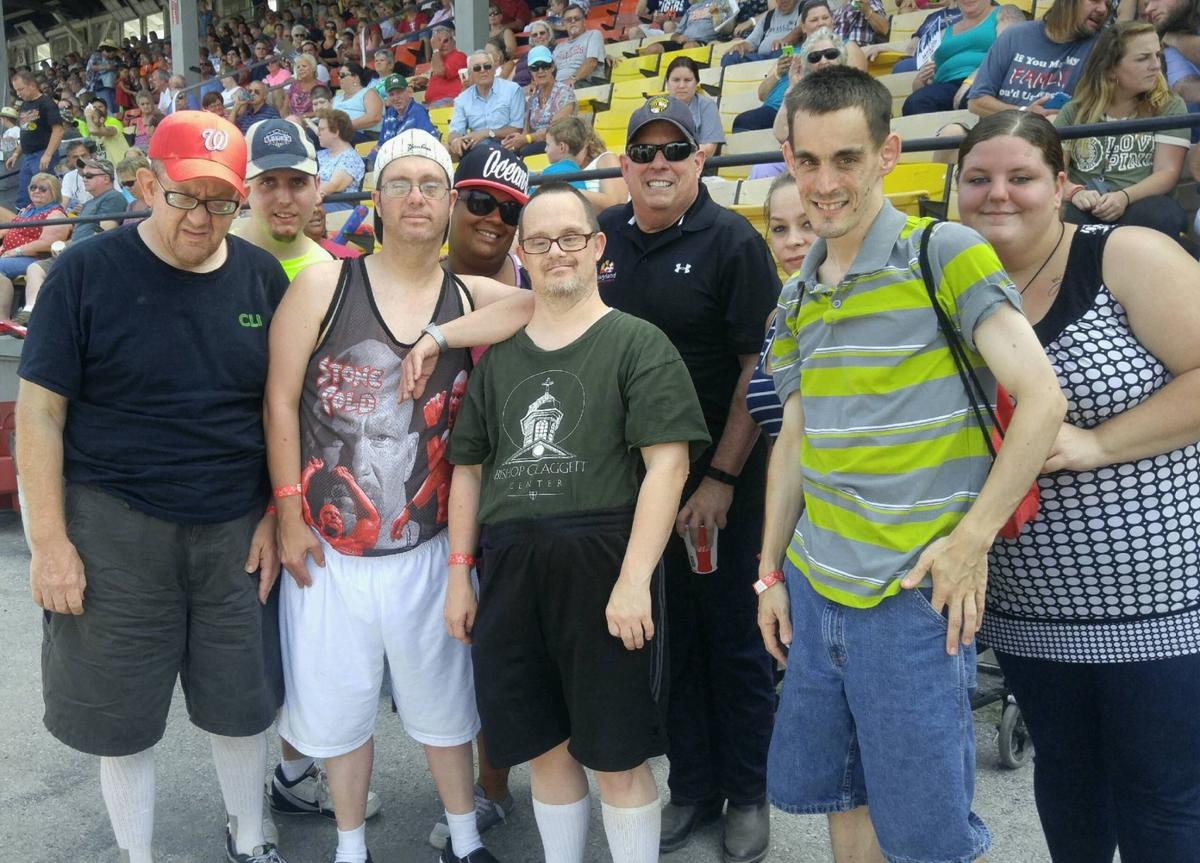 Community Living residents and staff with Gov. Larry Hogan in 2016. 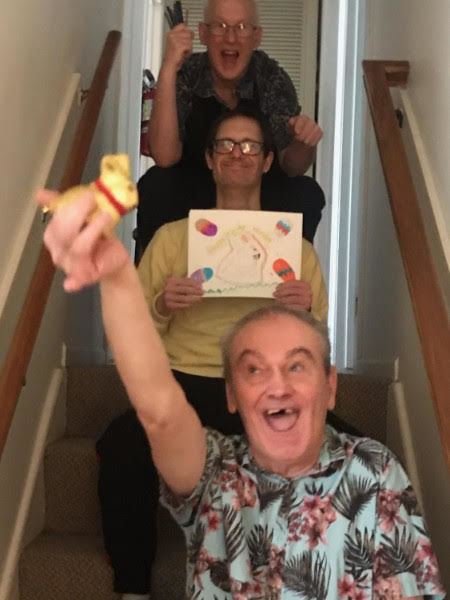 Community Living residents and staff with Gov. Larry Hogan in 2016.

Before COVID-19, Leon Nowlin and some of “his guys” — residents at one of Community Living’s group homes — would sometimes go out to eat as a group with other residents and staff to places like Famous Dave’s BBQ.

Now, their routines and activities are different. But they deal with it the best they can.

About once a week, Nowlin drives some of the residents he cares for to places like the Point of Rocks Railroad Station, where they'll watch the trains.

For more information about Community Living Inc., the services they offer and their needs, go to communitylivinginc.org or facebook.com/CLIFrederick

Nowlin, a house manager, is one of about 235 employees at Community Living Inc., a local nonprofit that supports adults with Down syndrome, autism and other intellectual and developmental disabilities. Many of these are essential and responsible for caring for some of the community's vulnerable population.

“A lot of times people are focusing, as they should be, on first responders, nurses, doctors — and all of those people are doing amazing things — but there’s also care staff who are essential, just as essential, because the people that they support are vulnerable,” said Elaina Lyons, Community Living's marketing representative who owns Lyons Share Marketing, LLC.

CLI has 26 residential group homes in Frederick that are staffed by essential workers who help the people in their care with everything from grocery shopping to bathing.

They also offer and staff a vocational program, support services and a retirement program.

All-day services, including the vocational program and the retirement program, have been closed since mid-March and support services, which offer help with activities such as grocery shopping or attending doctors appointments, are only available on a limited, person-by-person basis.

Many other changes have occurred since COVID-19 started, including staff completing a symptom check form before starting work and wearing personal protective equipment. No CLI staff has been laid off, but things have changed since houses need to be staffed 24/7, seven days a week and residents are no longer attending day programs from 9 a.m. to 3 p.m.

“We’ve gotten the staff who would normally work in the vocational program or the retirement program during the day and they’re filling those shifts,” Planz said.

As for the PPE, both Planz and Lyons said that the community has stepped up.

“The community has honestly been amazing," Lyons said. "There’s been so many mask donations, people hand-making masks and donating them, donating hand sanitizer. It’s just been incredible.”

CLI has also been able to buy some masks and Planz said they currently have sufficient masks for staff who need them.

COVID-19 has also been difficult for residents, not just because they can no longer attend day programs or do many activities but because, for many people, especially those with intellectual or developmental disabilities, change can be difficult or result in changes in behavior.

Nowlin, who has worked at CLI for almost eight years, said before COVID-19, two of his three residents attended day programs.

When the residents came home, Nowlin said he would make dinner and sometimes they would go out and do an activity.

Other times, Nowlin said they would take one of the residents to visit their mother.

And now, “it’s kind of rough,” especially for the two residents who were used to going out for their day programs.

In addition to activities like visiting the railroad station, Nowlin said they have coloring books and board games that residents can use.

“We just keep their minds occupied,” he said.

Nowlin said that because of the work the staff does, having a steady staff in the houses can help lessen any changes in behavior residents might exhibit as they deal with changes to their daily schedules.

“They have a routine and they're used to seeing me,” he said. “A change in routine is very difficult.”

A few CLI residents are still working in jobs that are essential. These include nursing homes and grocery stores. Planz said they and the people around them are wearing PPE and taking proper precautions.

Other residents are more at risk for COVID-19 based on age or existing medical conditions.

Planz said CLI has a registered nurse and two licensed practical nurses that follow up on any symptoms.

“Stuff still happens that is not COVID-19,” he said. “Everybody's very hypersensitive about it now but if anybody reports any kind of symptoms of any kind, our nurse or one of the LPN’s will go out and assess the situation.”

Guests are also restricted and Planz said they try to keep the same staff working in the same places as much as possible, “just to reduce the number of people who are going in and out of any one place.”

When he's not at work, Nowlin also cares for his 91-year-old father and said he doesn’t do a lot on the weekends.

“I have to take extra precautions because he has underlying issues so I really have to wear my mask and wear my gloves to protect myself and my individuals,” he said.

Nowlin said he’s not scared because he’s taking the proper precautions. He also said that God will protect him and his residents.

“This too shall pass,” he said, adding that Planz is making sure that staff and residents have everything they need.

COVID-19 has also impacted CLI financially, in part because no money is coming in from the day programs, but also because they’ve had to cancel events and fundraisers.

“It's tough because I think all nonprofits are kind of really, really struggling to keep their doors open, to make ends meet,” Lyons said.

Staff also still has to be paid for working during the hours residents normally wouldn’t have been home.

“We’re not getting paid on the one side and we’re spending more on the other side at the same time,” Planz said.

He said the Developmental Disabilities Administration is CLI’s funding source and the DDA applied with the Centers for Medicare and Medicaid Services for waivers that now allow CLI to bill for the hours that they are supporting people at home during the day and if they provide remote support for people who don’t live in the residential program, those hours can also be billed.

CLI has also been approved for a federal Paycheck Protection Program loan, which will help make up for any revenue shortfall and make sure CLI doesn’t have to lay off any staff.

“That’s going to be a huge benefit for us,” Planz said.

Thanks to the FNP and Hannah for having the idea to write this article. A follow up about similar agencies would be nice to read.

What dedication. Thank you so much for all you do.

Thanks to Mr. Nolan and staff for providing the comprehensive support that you do for your residents and clients and for being adaptive during this difficult time. You are all truly essential workers and should be recognized for the great work you do!