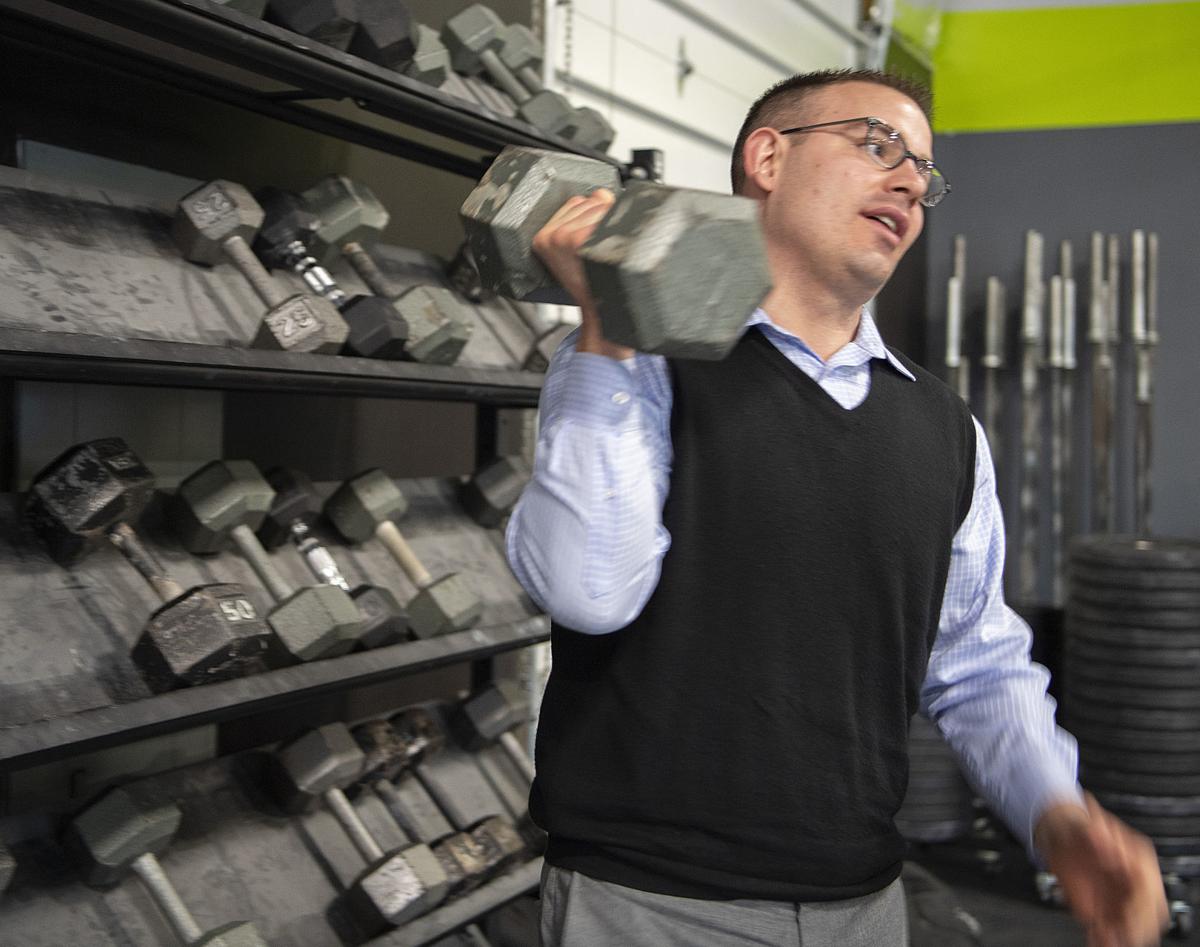 Chris Payer, a member of Odin Crossfit in Frederick, carries a 25-pound dumbbell through the gym to his car Tuesday afternoon. The gym, which has closed because of the COVID-19 shutdown required by Gov. Larry Hogan, has allowed members to borrow weights and other workout tools and encouraged them to participate in daily online virtual workouts. 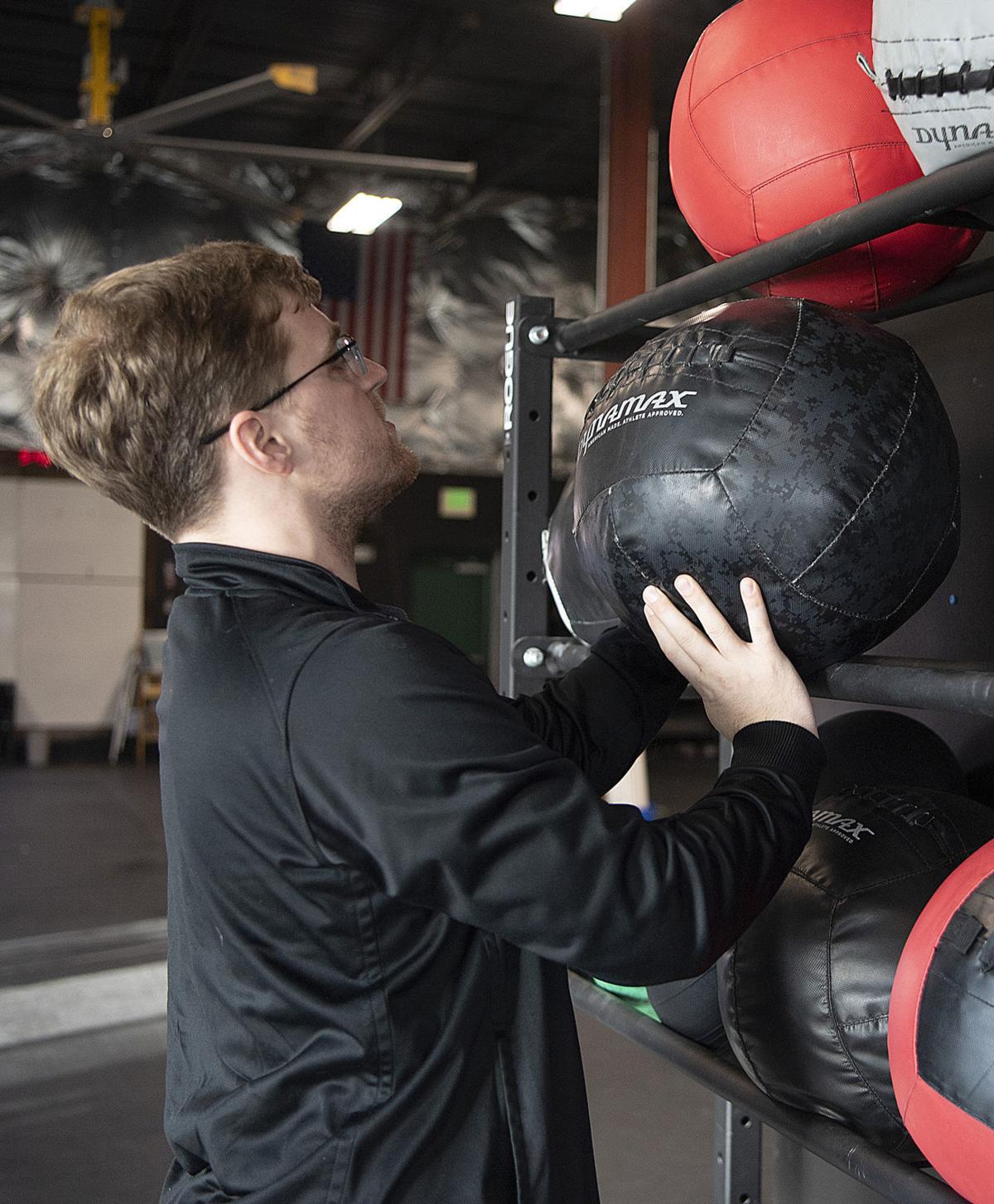 James Downing, a member of Odin Crossfit in Frederick, selects a medicine ball to borrow Tuesday afternoon. The gym, which has closed because of the COVID-19 shutdown required by Gov. Larry Hogan, has allowed members to borrow weights and other workout tools and encouraged them to participate in daily online virtual workouts.

Chris Payer, a member of Odin Crossfit in Frederick, carries a 25-pound dumbbell through the gym to his car Tuesday afternoon. The gym, which has closed because of the COVID-19 shutdown required by Gov. Larry Hogan, has allowed members to borrow weights and other workout tools and encouraged them to participate in daily online virtual workouts.

James Downing, a member of Odin Crossfit in Frederick, selects a medicine ball to borrow Tuesday afternoon. The gym, which has closed because of the COVID-19 shutdown required by Gov. Larry Hogan, has allowed members to borrow weights and other workout tools and encouraged them to participate in daily online virtual workouts.

When Sean Moore dropped into Odin Crossfit on Monday morning, he knew it was just a matter of time.

People began recommending gatherings of fewer and fewer people. The writing was on the wall that the gym would eventually have to close, he thought.

Only hours after his Monday workout, that thought became reality as Gov. Larry Hogan announced that all gyms would be shut down at 5 p.m. until further notice.

“I thought we might be spared, because we only have 20 or so people per class, and we’re spread out because it’s a big space,” said Moore, who began attending Odin with his wife, Lucy, about a year ago.. “But we weren’t. ... This has become a big part of our life, so it feels ... kind of like losing a friend.”

Now, thousands of residents are left to figure out how to meet their fitness goals. And dozens of gyms are rallying to find ways to keep a connection with their clientele.

“I think people are really concerned about losing touch,” said Odin Crossfit co-owner Allison Jachowski, who owns the business with her husband, Jason. “That’s part of what we’re all about. We have a connection. ... This is where people come to feel connected. It’s their people. It’s their social hour. It’s their outlet. They’re concerned they won’t have that anymore.”

After being shut down, Jachowski allowed members to come to the gym and check out equipment such as dumbbells, kettlebells and medicine balls to use during the shutdown. The members had nearly cleaned out the kettlebells and dumbbells by 6 p.m.

The gym, like many others around the county, plains post workouts on Facebook for its members, as well as on an app called SugarWOD. The posts will also include content to help gym members get in the right mindset as well. They’re also asking all the gym members to take videos and photos of them doing the at-home workouts and tag the gym on social media as a way to continue building connection.

Barre East, which practices physical fitness performed at a ballet bar and movements derived from ballet, is implementing similar virtual content for the public while it is closed.

Megan Ellis has run the gym for five years, and become close friends with her clients. It hurt her to have to close, she said, but she wants to continue staying in touch with the people who go to her studio.

So she too has incorporated some virtual instruction, and has opened it up to the public, not just members, at this time.

While Ellis has had some members ask to put memberships on hold for now, she said many of them have specifically asked to keep charging them, because they want to support small businesses through this period.

“Some see this as a monthly charge they have budgeted for, so if they’re able to keep paying it, they’ve been willing to,” Ellis said. “I’m obviously appreciative and understand both.”

Patrick “Sarge” Avon, owner of Sarge Athletics, said his gym has had success signing some new members up even while being shut down.

He was driving to the beach for his wife’s birthday Monday when he heard the news, and ended up having to turn around and come back home in order to implement new plans to keep the gym functioning. They had planned virtual content for members and the public in anticipation of eventually having to shut down, but they got the news about a week earlier than expected, he said.

However, he said while many gyms are facility-based, places like his are service-based. His goal is to build a connection with their clients. To make them feel better about themselves.

Many gyms holding workouts virtually will also focus on body weight exercises to reach audiences that may not have access to weight equipment. Jachowski and Avon both said they’ll incorporate household options such as backpacks with books in them into the workouts for people without access to traditional weights.

“That’s going to be the new norm for a while,” he added.

As the new coronavirus forces gyms to adapt and innovate, some of these elements, like virtual instruction, could become mainstays in their business.

Jachowski said she and her husband, Jason, have talked about the possibility of making this permanent if gym members find value in it.

“If people really love it, it might change everything,” Allison Jachowski said.

Avon said he already had plans to implement more digital content. The pandemic and eventual shutdown just expedited those efforts.

Moore, one of the members, said he was appreciative of the opportunity to still get programming and instruction from the gym.

“It’s cool [they’re doing this], but it’s not surprising given who they are,” Moore said. “We obviously would love to be here, but if we can’t make it happen, it’s great they want to help us keep it going.”

As Moore and about a dozen other members of Odin Crossfit trickled out of the gym for the last time for the foreseeable future, Jachowski warned them about staying active, saying lack of activity through this would cause regression.

But mostly, she implored them to stay connected. They’ve built a family at Odin, just as Avon has at Sarge and Ellis at Barre East.

Now, that family, and their connection, is more important than ever.