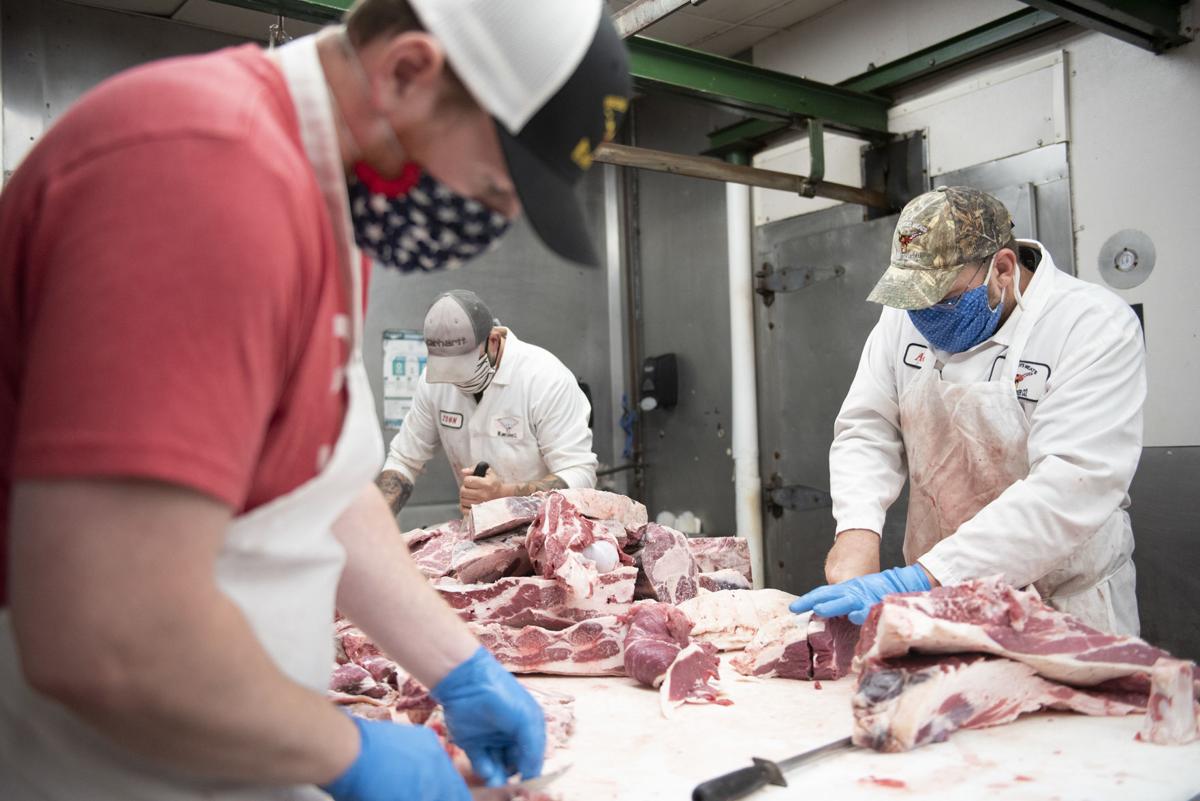 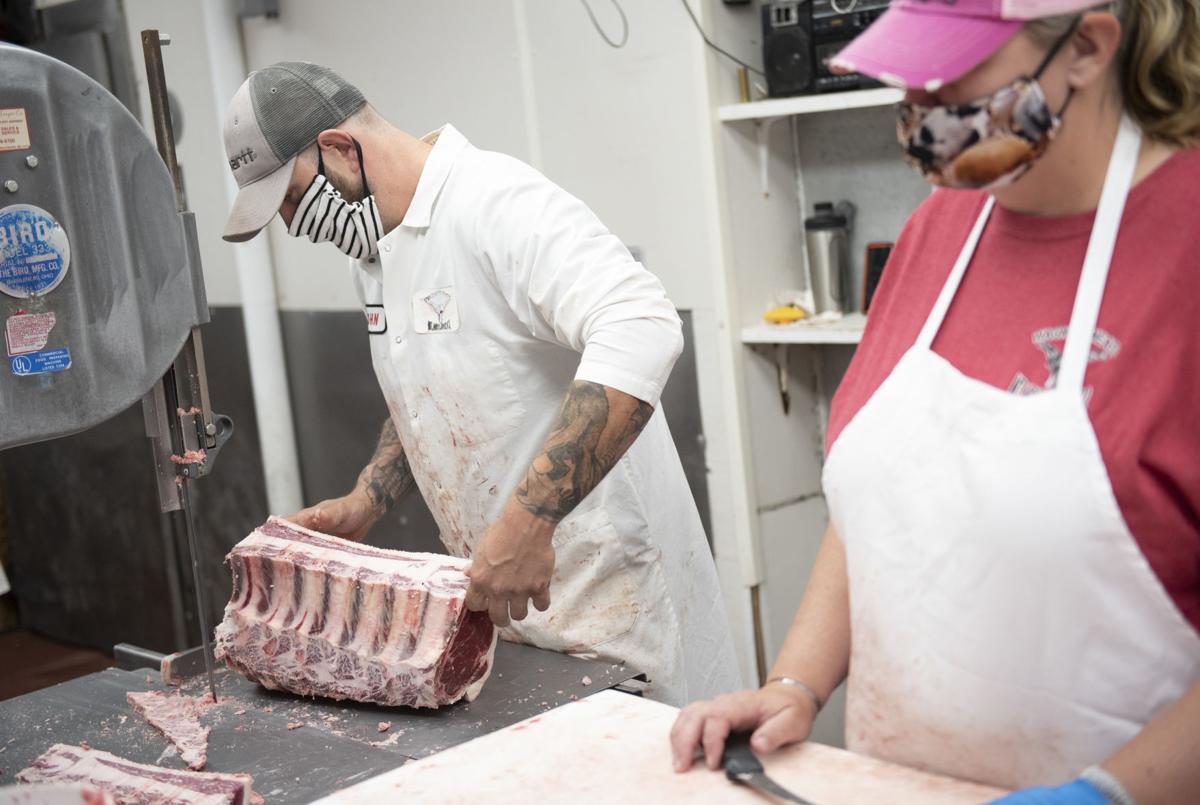 Local meat processors and retailers are seeing an uptick in business during COVID-19.

When asked how they deal with trying to process more animals, Wagner said “we can’t. That’s the problem.”

“We’re only so big,” he said. “Our problem is space … Hogs are one thing. To process hogs, we slaughter them and process them the same week. Beef’s a little different. We let them hang anywhere from 14 to 28 days … that limits our quantity that we can do.”

Wagner said they aren’t booking anymore cattle for the rest of the year.

On the retail side, Wagner said “it’s been like a madhouse.”

“[People are] seeing food shortages and they’re just in a panic,” he said.

Some prices have also had to be raised because they’re based on the meat and pork markets and some suppliers have increased their prices, too.

“I hate doing it,” Wagner said. “People don’t realize that it’s a commodity, you know, it’s traded just like oil.”

Wagner said providing this service is important because “everybody’s got to eat.”

“We’ve stepped up as far as processing more company beef, pork and, you know, to help adjust for the demand but it’s crazy,” he said. “Nobody expected this and then all of a sudden everybody was in a big panic and there for probably two, two and a half months it’s just been everyday is insane, insanely busy. It’s a good problem to have, don’t get me wrong.”

Shuff’s Meat Market in Thurmont, a butcher shop that also has a retail store and sells meat products like beef and pork, has been busy too.

Brian Bowman, vice president of Shuff’s, said that if before COVID-19 the business was going 100 mph, with COVID-19 they’re going 600 mph.

For two weeks, Bowman said they’ve had to close the retail store Monday through Wednesday to catch up.

“We’re behind in cutting our own product,” he said. “It’s only temporary but we don’t know how long temporary’s going to last.”

Bowman said they’ve seen an uptick in both people wanting meat processed and people buying for home freezers, which he says a lot of people are doing because the future is uncertain.

He also said he’s had trouble with having enough staff to meet the demand.

As for providing this service for the community, Bowman said he does his best.

“It’s a terrible thing to see someone without food.”

At Hemp’s Meats in Jefferson, a butcher shop that sells products like beef, pork and poultry and specializes in the custom slaughtering of beef, things have been busy as well.

“We’ve been able to keep up,” said Bill Hemp, part owner at Hemp’s. “We’ve had to put some limits on a couple of things.”

They also had to reduce their hours because it was too hard on the staff to keep up.

“Up until a couple days ago, and I expect it to come back this weekend ... it’s continuous for the six hours we’re open,” he said. “We’re also working more than we did before.”

Hemp said the business was already operating at capacity before COVID-19 but typically, that would taper off in March or April and they would be able to catch up.

“But that’s not the case this year, it looks like we’re going to be operating at capacity all summer long,” he said.

On the retail side, Hemp said they also get products from the wholesale market in addition to the sides and quarters they raise themselves.

“We’ve got a pretty good relationship with [the suppliers], so we’ve been able to have product the whole time,” he said. “It’s hard to keep it and of course this has created an uptick in pricing for a lot of items, not everything.”

Hemp added that they haven’t passed the price increase from suppliers along to customers as a percentage, but rather dollar for dollar.

Hemp said he thinks one reason for the uptick in business is that people aren’t eating out as much and are cooking more at home.

“That puts us in the kind of same realm as a grocery store almost,” he said. “I believe that some stores aren’t quite as well stocked as we are and we might be getting some of that overflow, maybe, maybe not.”

But Hemp emphasized that this is temporary and that there’s a lot of backlog in production that will hit the market eventually when larger plants open completely.

“So I believe there’s going to be a glut,” he said. “It’s just getting it processed is the problem.”

He also said he doesn’t think that it helps when the media amplifies that there might be a shortage of something because it causes people to overreact.

“Then you’ve made it worse,” he said. “We’re not going to run out of meat, I don’t think. It’s just there might be a little glitch in a supply of one or two things. If you can’t get one thing, you can certainly get something else.”

Information for Shuff's Meat Market, according to their Facebook page:

The Wagner family are wonderful people, they take care of the community. Huge appreciation, people, you all are the best.

My family grew up going to the local smaller store with an in-house butcher. The were outgunned by the mega-grocery stores and went under decades ago. Now the mega-stores can't keep product and have even before jacked the pricing to where it isn't worth buying. Even Wegman's cut out fresh hand-cut NY Strip steaks entirely and force you to buy the pre-packaged ones (ugh.). No thanks. I also don't need a gigantic family pack from Costco. Shuff's earns my business for that now and for deer processing already. Better product and fair prices too.

I stopped buying steaks/ground beef/roasts from grocery stores years ago. The product at local butchers is a much better quality.

Now it the time for Frederik to step in and return business to the County. I expect they do a better job than the factory processors. I do hope the workers are well paid for their work. This exactly what we should be doing. Our part will be to be customers of these local businesses.