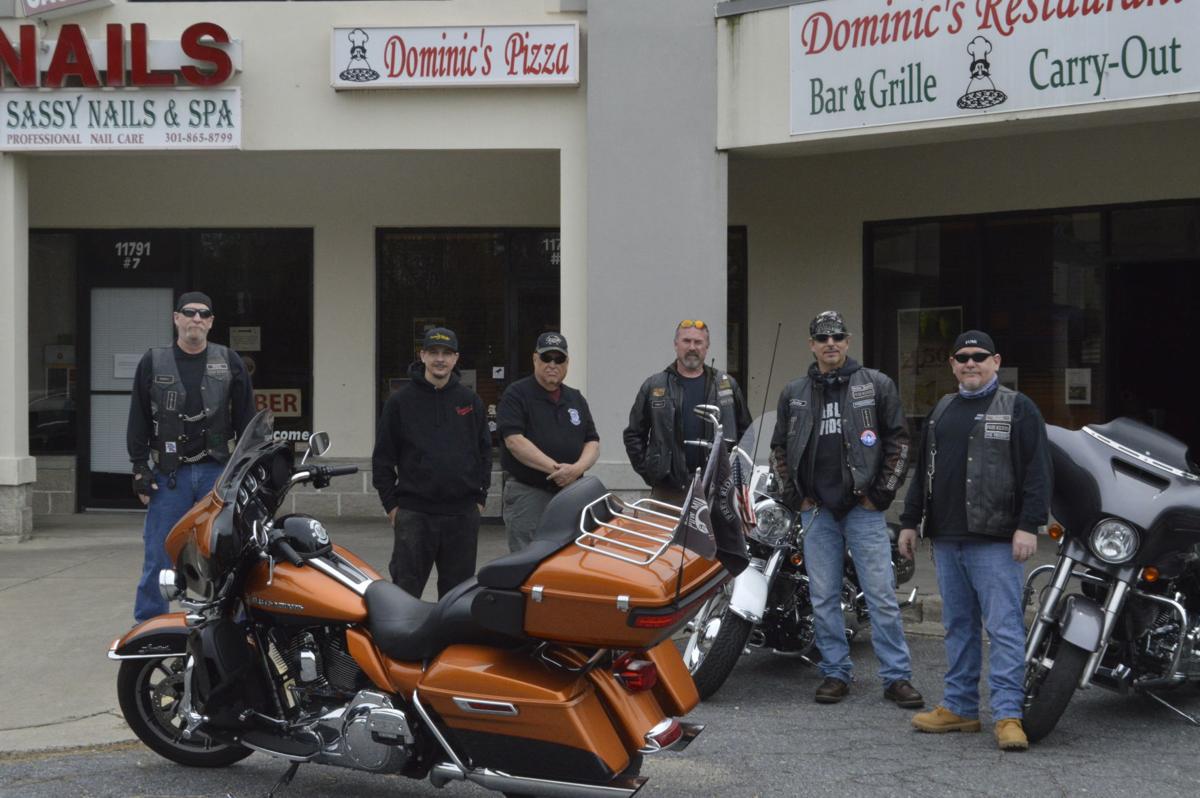 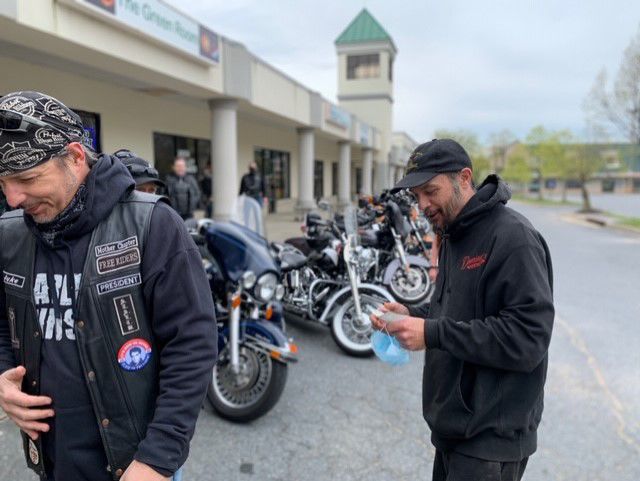 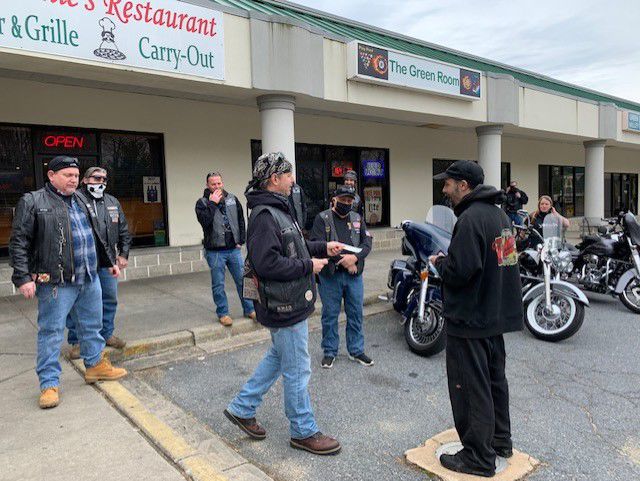 When Justin Grow saw members of the Free Riders Independent Motorcycle Club pull up outside his restaurant earlier this week, he assumed they were just stopping by to say hi.

Instead, the 501(c)(3) charity organization presented Grow, who co-owns Dominic’s Bar and Grille in Monrovia with William Wise Jr., with a check.

“Justin has supported this club for a very long time,” said Happy Harrington, a member of the Free Riders. “We thought that we could do something to support him as he’s supported us over the years.”

Free Riders Independent MC supports other groups and individuals and raises money through fundraisers. They often hold events at Dominic’s.

“Our main purpose is to ride together as brothers, be a club as brothers and to raise money to help the community,” said Larry “Norton” McIntyre, also known as master of coin or treasurer.

Grow said owning a restaurant is a lot of hard work under normal circumstances, but the COVID-19 pandemic has been crippling.

While the donation amount will stay between Grow and the club, Grow said it was "very generous."

“Because of people like the Free Riders … we might make it through,” he said. “We’re a big family here … We like to be part of the community. We try to do as many events — I mean, I never turn down anything.”

Events and fundraisers are hosted at the restaurant and Grow said they also make donations to charities in the community.

Grow said being presented with the check was overwhelming and also made special note of a woman named Cristi Franklin, of the band Poverty Ridge, who is an organizer on a GoFundMe page for the restaurant.

“They’re like family to us as well and they set up a GoFundMe, which I think is what kicked a lot of this off,” he said. “It’s just those kind of things that just make you feel really good because you know that people feel the same way about you that you feel about them.”

Grow said the restaurant has lost about 60 to 65 percent of its business during this time and that they thrive on events.

“For the first few weeks, I thought, OK, we might be alright ... but the more this has gone on the more it’s become clear to me that the longer this goes the less chance I have of staying open,” he said.

Grow said the check, the GoFundMe and other donations will help with things like paying bills for the restaurant.

Club member Wayne “Crabby Daddy” Harris said Grow never says no to an event or a special request and always helps the community.

Grow said Free Riders Independent MC helps people “all the time, and so this is not like one of these, you know, we’re just going to try to show off while something’s going down.”

“It makes you feel good inside,” he said.

Club President Jimmy “Juke” Boxall said giving to the community also helps get them out of the stigma of being a motorcycle club, which can get a bad rap based on what people see on TV or in movies.

“So, it’s satisfying in that way also because we’re not like that,” he said.

Harris said he hopes the club can start a trend in the community by offering help.

“Let's make an example for somebody else,” he said. “Maybe somebody will take notice and say, ‘hey, we could do the same thing.’”

Justin Grow has been at Dominic's Bar and Grille for three years but was at the restaurant's Silver Spring location for 18 years before that.

The restaurant is doing carryout and delivery. Grow said he's had people come and get a lot of food to give to others, like the fire department, "because they're trying to support us and maybe trying to support the fire department or whoever it is they're giving the food to. So I've had that as well, and that's good to see as well. The whole community kind of coming together."

For more information about the restaurant, go to dominicsbargrille.com

The GoFundMe page to support Dominic's Bar and Grille can be found here: gofundme.com

well, My intake on this would be, Why just not have mailed it? Or wired the monies.Yes even outside we have to wear mask.

Can you point us to the order that says we have to wear a mask outside?

you do not need to wear a mask while alone, outside, taking walk, driving in a car, etc. its for when you are inside a store.

I knew that, I just wanted chyanndqt to do some research and find out what is what. Yesterday I was accosted in Baker Park by an ignorant do-gooder who berated me for not wearing a mask while walking outdoors. Sheesh. [ninja]

Absolutely love all these stories of folks helping others. And to everyone with a negative comment about "those type of people", social distancing, or the restaurant, SHAME ON YOU. People are doing nice things just to help. What are you doing besides sitting on your keyboard posting negative crap?

Shame on you for social distancing? Really? Coronavirus will not strike anyone doing a nice thing?

Kudos to all of you! What a wonderful act of kindness. In spite of so much negativity in the world goodness will prevail.

Sweet that these guys all live together and quarantine together so they don’t have to practice social distancing when they go out. Group houses are nice.

Doesn't look like they are being unsafe from the pics. Lots of assumptions.

I can only go by the photo, that shows them clearly not wearing face masks or standing six feet apart. So must assume they share a house. Very sweet.

"So must assume they share a house?" Are you aware of the old saying about assuming? "It makes an @$$ out of you, not me." Very sweet.

Aren't masks only required if you step inside a retail establishment?

Stunned at some comments. These people did a wonderful act of charity and people want to pick it apart. SOOOO much negativity surrounding FNP's LTE's.

they are separated, and they don't need a mask while outside.

I take it they're friends of yours?

Hey, you go social distance then you need not worry about them.

Great to see the support for a local business

A bigoted statement FAUX. These folks are not 1 percenters.

So they need to be?

Where do you see that? FAUX was implying that they were low-lives. FAUX's post is now deleted. These guys are normal ordinary average guys trying to do something good for a local business.

And seven finds it necessary to try to make something out of nothing. These guys are to be commended. [thumbup]

Goodbye for now, but he'll be posting more in the future. The man is desperate for attention.