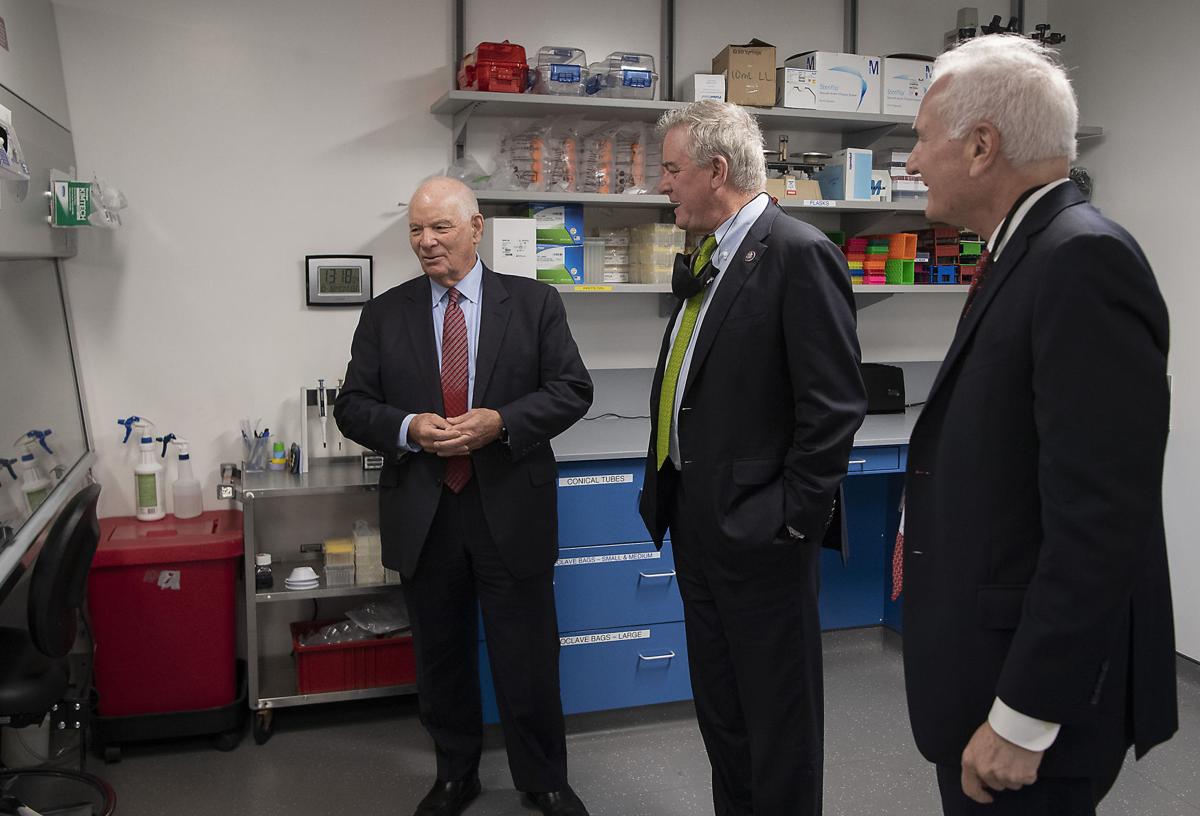 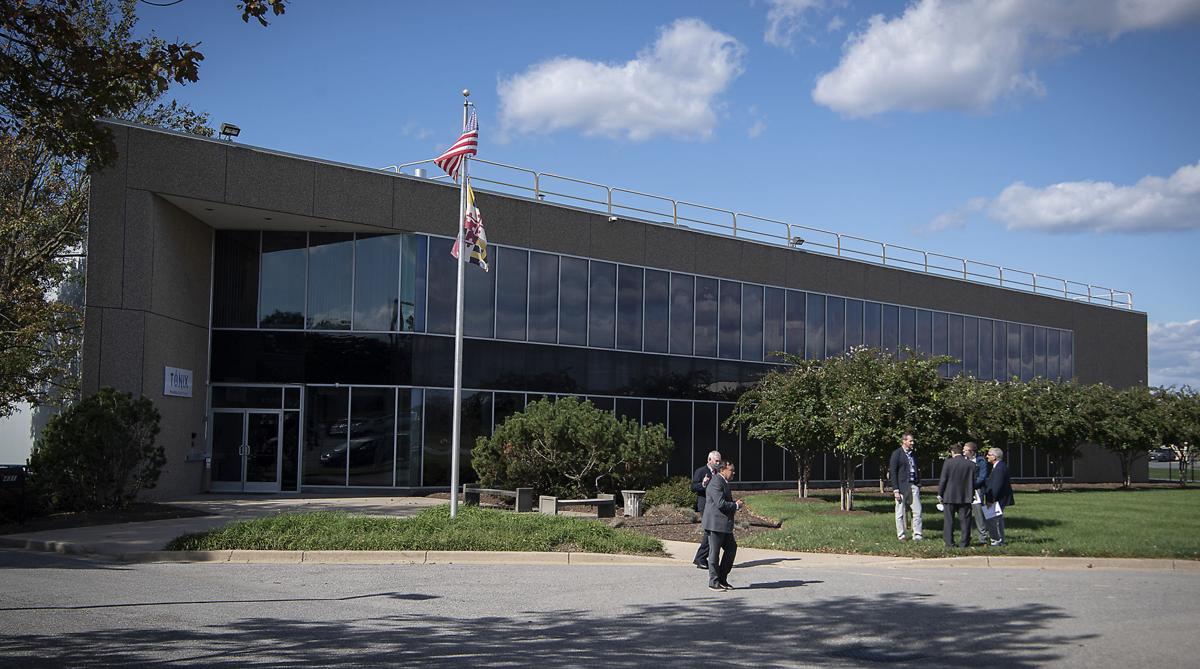 Tonix Pharmaceuticals Holding Corp., a clinical-stage biopharmaceutical company, held a ribbon-cutting ceremony at the company’s new research and development center Monday in Frederick. The approximately 48,000-square-foot center on Aviation Way is the site of the former Southern Research Institute building.

Tonix Pharmaceuticals Holding Corp., a clinical-stage biopharmaceutical company, held a ribbon-cutting ceremony at the company’s new research and development center Monday in Frederick. The approximately 48,000-square-foot center on Aviation Way is the site of the former Southern Research Institute building.

With the snip of a ribbon on a windy Monday afternoon, Tonix Pharmaceuticals officially has a research and development center for infectious diseases — and it’s located in Frederick, right down the road from the city’s municipal airport.

Standing before the 48,000-square-foot facility, Dr. Seth Lederman — co-founder, CEO and chairman of the 10-year-old biopharmaceutical company — told the gathered crowd it makes him feel a little dizzy to think about the path that brought Tonix where it is today.

Shortly after the coronavirus pandemic erupted, the management team at the company met with its board of directors and investors to discuss how it might contribute to the burgeoning fight against the unfamiliar virus, Lederman recalled.

Everyone agreed that Tonix should plunge forward in the race to create a COVID-19 vaccine, he said. The company had been developing a live virus vaccine platform for several years that its leaders believed to be “directly relevant” to the new public health challenge playing out on a global scale.

But because Tonix relied on outside contractors to conduct research and develop products, the company was outrun by other entities working on a vaccine, Lederman said. For Tonix to be competitive, Lederman said, its management team realized it would need to assemble its own internal capabilities to develop vaccine technologies.

“With this new center, we plan to expand our capabilities of our mission to contribute to the health, safety and security of America and the world,” Lederman told the audience at Monday’s ceremony. He later added, “We have ambitious goals for our facility, and we’ve hit the ground running.”

Tonix acquired the building from Southern Research Institute earlier this month, Lederman said. The center — planned to employ about 100 scientists, technicians and support staff — will complement the work of the company’s advanced development center, which is under construction in Massachusetts, and its commercial manufacturing center, which is planned to be built in Montana.

The facility will initially be used to support the development of the company’s vaccine, which Lederman said is projected to start being tested on human subjects during the first half of next year. Ultimately, however, the center will play an important role in helping the country be prepared for future pandemics, Lederman said.

“The pandemic has made us realize that the United States has been left dependent on foreign countries to make key ingredients in medicines and vaccines. It has also made us realize that moving high-tech jobs offshore has decreased the opportunities for our domestic STEM-educated workers,” he said.

The company’s new center will help combat both challenges, Lederman said. And to further expand opportunities for Frederick County Public Schools students interested in pursuing studies in the STEM field, Lederman announced Tonix will donate $10,000 to the Michelle Shearer STEM Fund — a scholarship offered by the Community Foundation of Frederick County.

A line of government officials turned out to Monday’s ceremony to congratulate Tonix and thank the company for choosing Frederick for its research and development facility.

U.S. Rep. David Trone, a Democrat who represents Maryland’s sixth congressional district, remembers meeting with the National Institutes of Health director in 2015 and asking him to name his biggest concern. The director’s response came quickly: a flu-like pandemic.

“We knew, yet we were not prepared,” Trone said. “We’ve got to use this as a learning opportunity. I know I’m preaching to the choir, but we must continue to beat the drum when it comes to guaranteeing government preparedness against future pandemic threats.”

As a strong breeze lashed the large sign behind the lectern and sent white tablecloths in the audience fluttering, Frederick Mayor Michael O’Connor smiled before beginning his remarks.

“These are the winds of progress blowing in the city of Frederick today,” he told the crowd. “They blow often, and they blow hard, and we’re very proud of that.”

Pandemic vaccine is good to work on, but how about all of the trade secrets we either gave away or let China clone and then undercut us with prices. If you think a pandemic is bad, think how bad a nuclear war can be.

Two of our loser elected officials show up for a photo op. The two idiots probably couldn’t wait to get out of Frederick and back to their posh digs.

Why do you run down Frederick so much?

At least someone has sense to know that we should NOT be relying on foreign countries to develop our technologies, medicines, essential supplies, et al. Welcome Tonix.

Election Year posers Cardin and Trone. Love how they are photographed prominently while the company CEO--who actually works and creates jobs--is pictured with his back to the camera, as an afterthought. Hey FNP: You'd been baited and tricked again by the grandstanding politicians.

Are you referring to the gentleman in profile whose back is not to the camera?