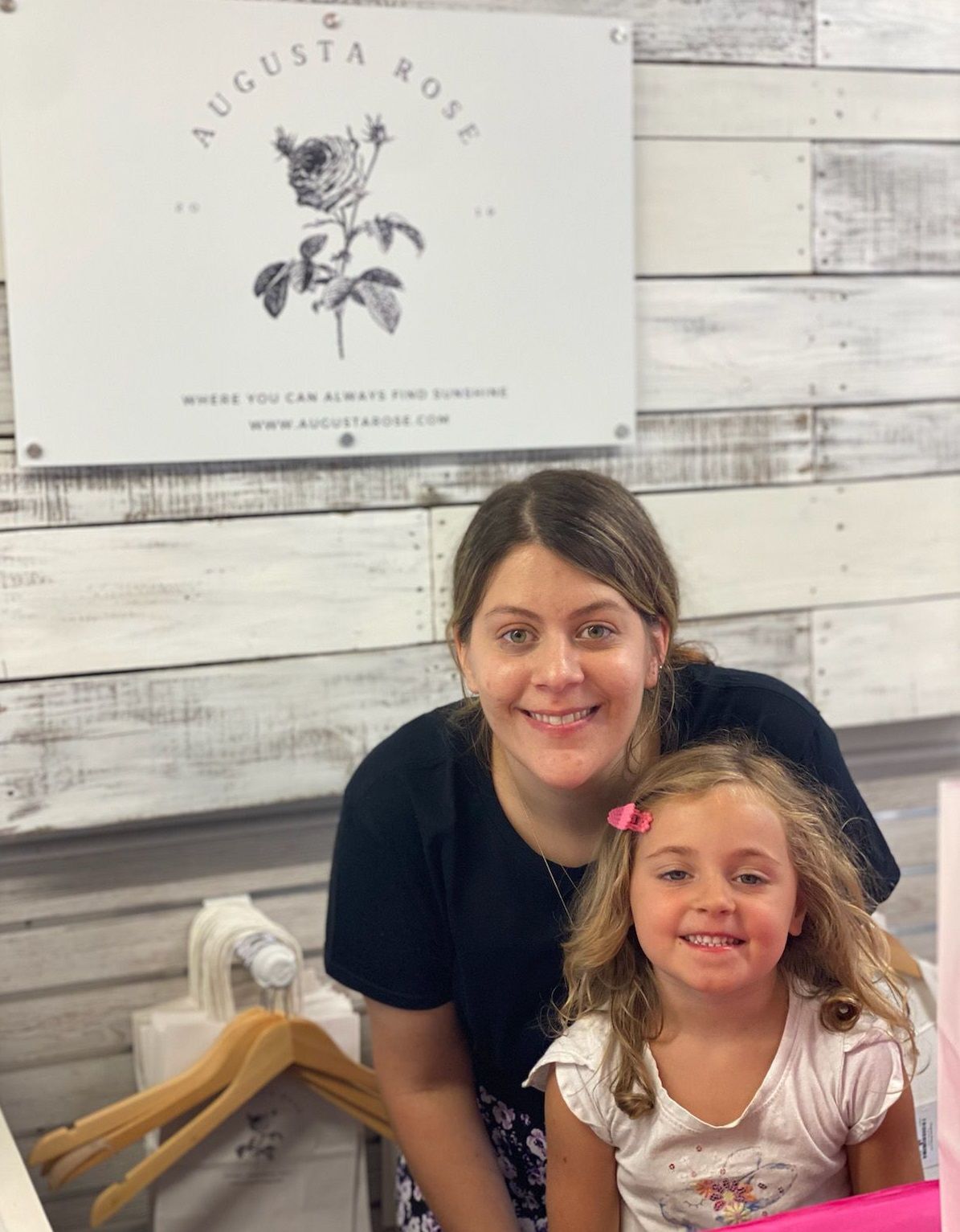 Mariel Braid poses with her niece in front of the sign behind the register at her new shop, Augusta Rose. The boutique sells accessories, gifts, novelty items, snacks and apparel and is located on East Patrick Street. 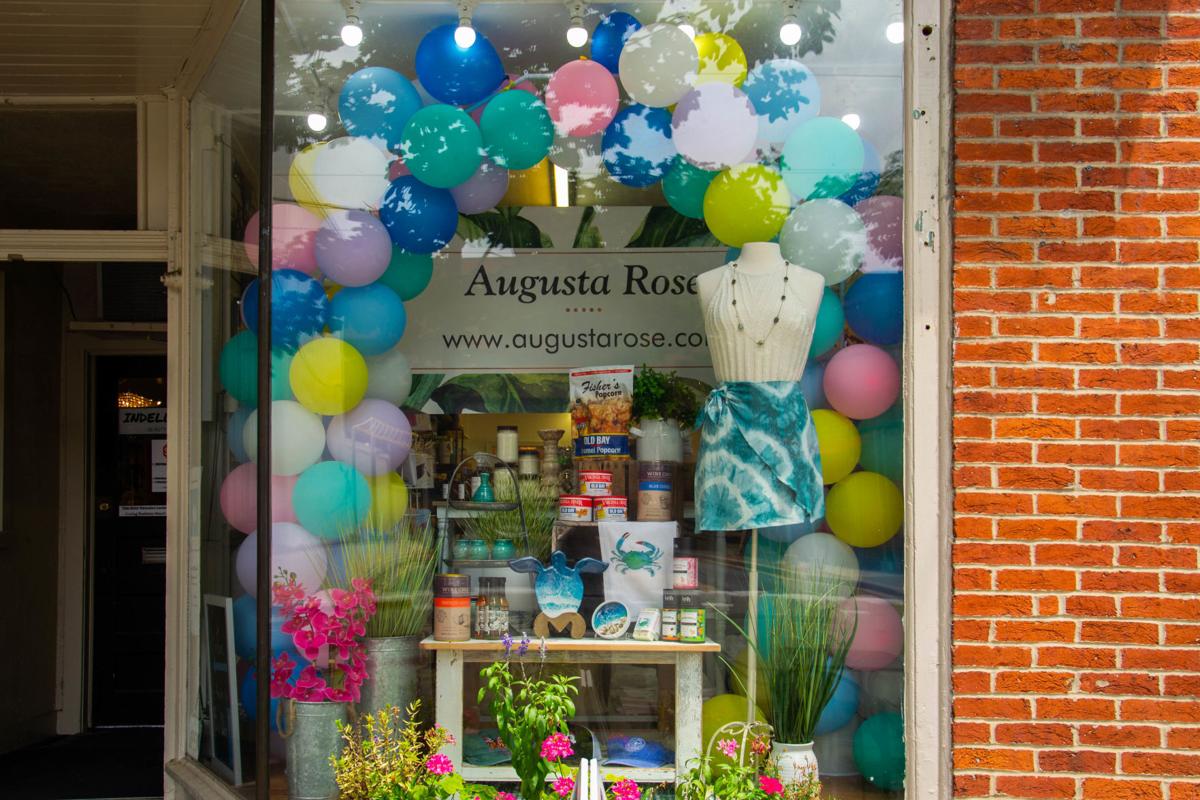 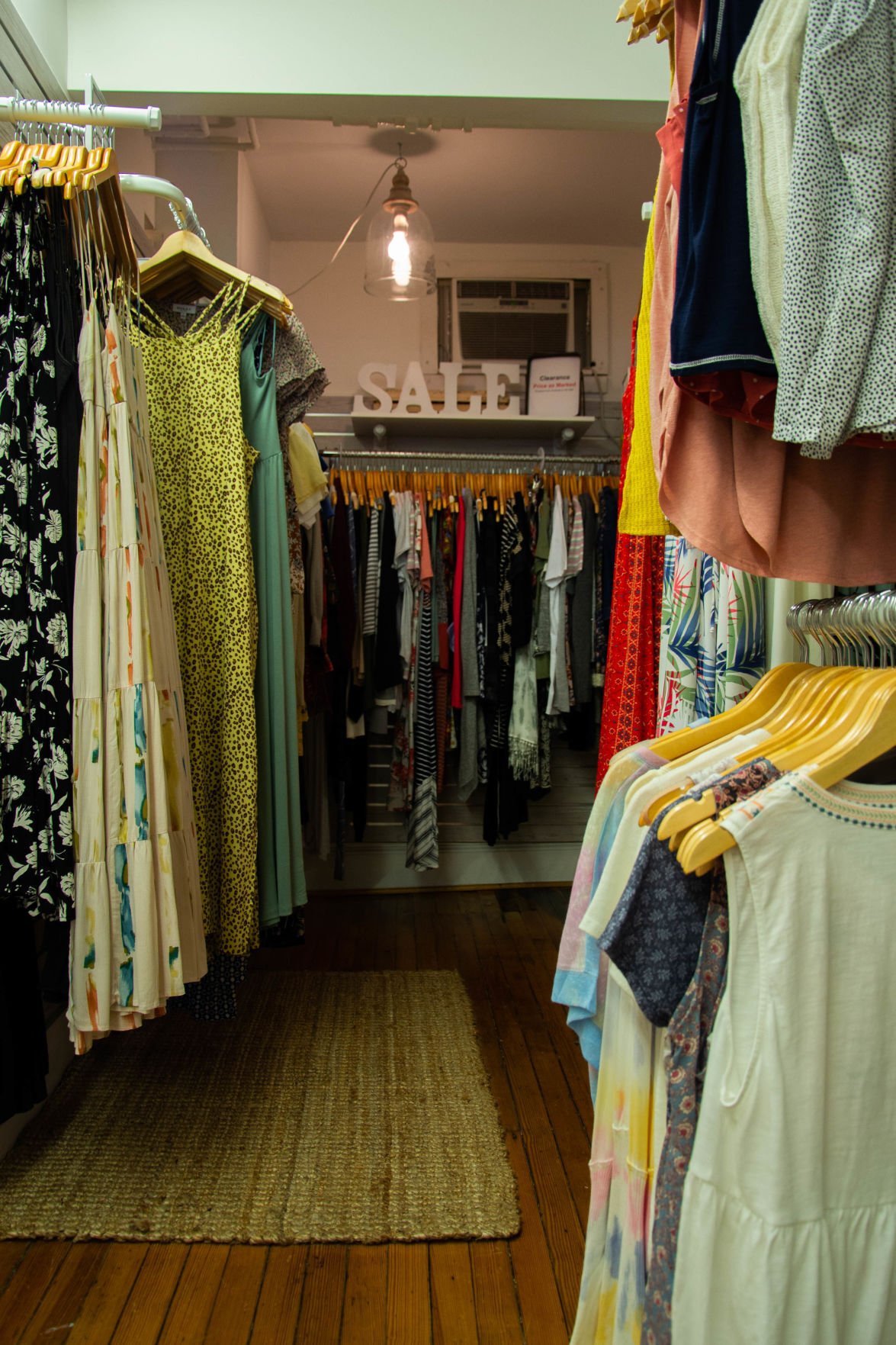 Augusta Rose, a new boutique on East Patrick Street, sells clothes from Route One Apparel, among other distributors. 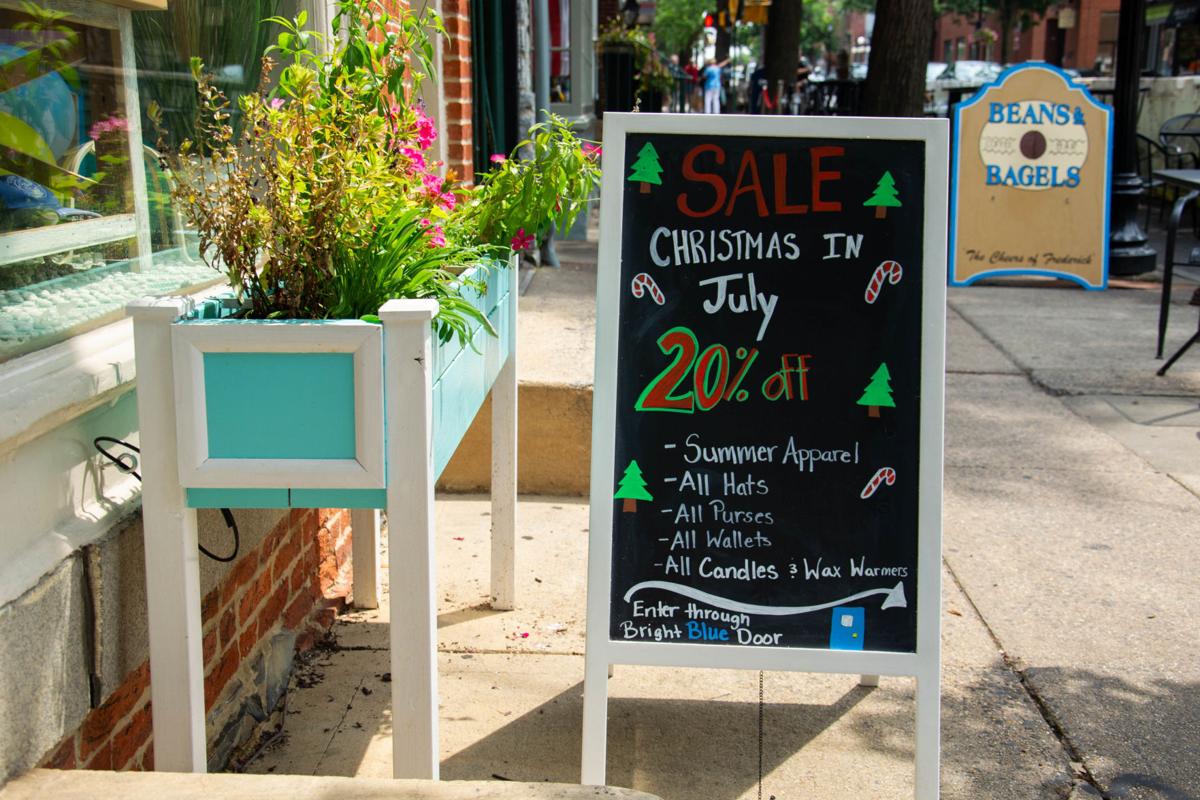 Augusta Rose, owned and founded by Mount Airy resident Mariel Braid, opened earlier this month. Braid’s boyfriend and family helped her renovate the storefront, which used to be a barber shop. 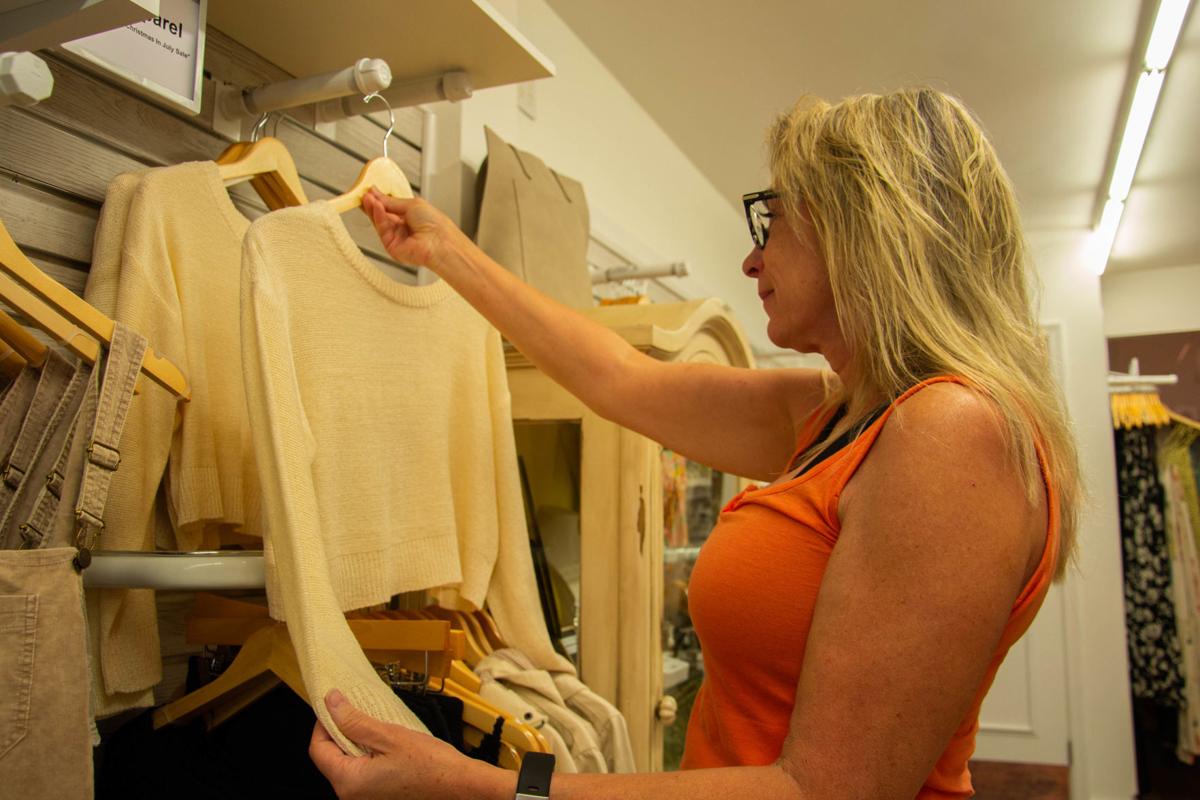 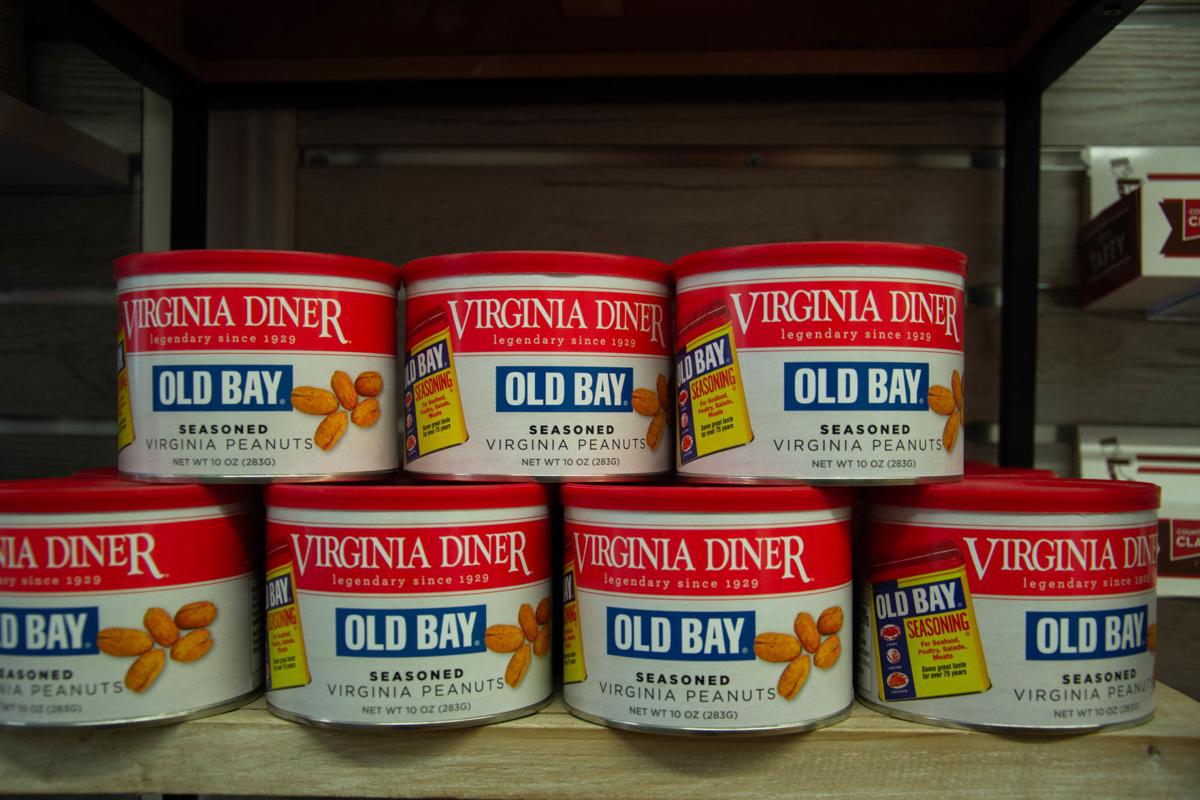 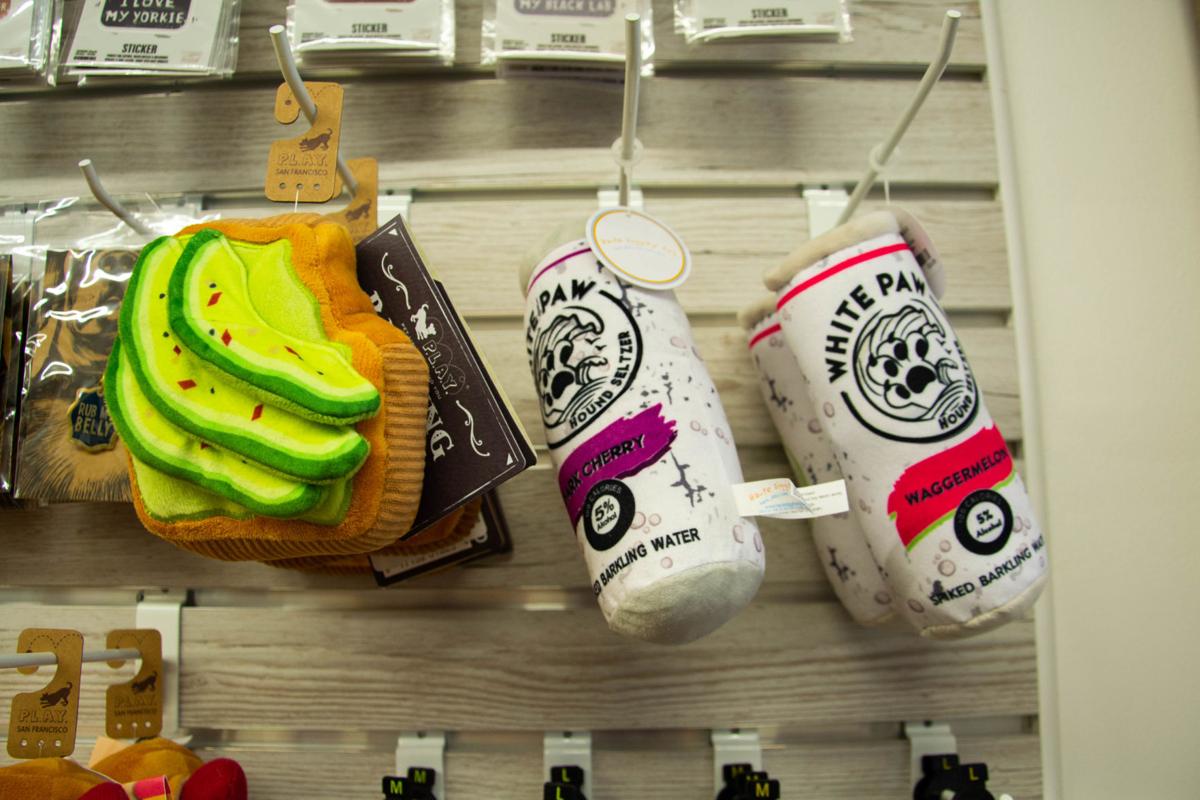 Plush dog toys, including cans of “White Paw,” hang on the wall of Augusta Rose by the shop’s front counter. The boutique opened earlier this month on East Patrick Street.

Mariel Braid poses with her niece in front of the sign behind the register at her new shop, Augusta Rose. The boutique sells accessories, gifts, novelty items, snacks and apparel and is located on East Patrick Street.

Augusta Rose, a new boutique on East Patrick Street, sells clothes from Route One Apparel, among other distributors.

Augusta Rose, owned and founded by Mount Airy resident Mariel Braid, opened earlier this month. Braid’s boyfriend and family helped her renovate the storefront, which used to be a barber shop.

Plush dog toys, including cans of “White Paw,” hang on the wall of Augusta Rose by the shop’s front counter. The boutique opened earlier this month on East Patrick Street.

Mariel Braid started working in retail when she was 15, and she hasn’t looked back since.

She was at a Catonsville consignment shop through college, then spent five years at a boutique in historic Ellicott City, where she and her coworkers weathered two floods. After that, she set up her own little shop in a 10-by-12-foot space inside Catonsville Mercantile, an eclectic storefront that sells vintage pieces, home decor and gifts.

Late Sunday morning, Braid, a Mount Airy resident, leaned against a counter near the front of a small shop on East Patrick Street. The wall beside her was crowded with plush dog toys — including cans of “White Paw” and oversized slices of avocado toast — and the store’s tables were piled with jewelry, candles, snacks, water bottles and cocktail mixes. At the back, clothes from designers including Maryland’s own Route One Apparel surrounded a changing room.

And for the first time, all of it was hers — all housed at her new Frederick boutique.

Braid named her little storefront Augusta Rose — Augusta for her middle name, which was also her great-grandmother’s first name, and Rose because she loves flowers. It was only later that she discovered that the second part of the name was also special in another way.

“My mom told me after I’d already picked it and done all the paperwork that [Rose] was my other great-grandmother’s name,” she said with a smile. “It was a happy coincidence.”

True to form, Braid said Augusta Rose has been a family operation since it began. When she first toured the storefront, which used to house a barber shop, she couldn’t even turn on the lights in the backroom. She leaned on her mom throughout the whole renovation process, and her brother and dad helped redesign the bathroom. Her boyfriend, a master carpenter, also helped, constructing the store’s changing room and installing wood paneling on its walls.

But it’s in the small shop’s window where Braid’s creativity comes to light. She graduated from the Maryland Institute College of Art with a degree in fiber, also dabbling in pottery in photography along the way. Her senior thesis, though, focused heavily on designing spaces. She was able to expand on this skill when she worked in Ellicott City’s Sweet Elizabeth Jane, where she did the window display.

On Sunday, pastel balloons hung in an arch in front of the Augusta Rose’s window, surrounding a sign with the shop’s name and an arrangement of snacks, candles and ocean-blue ceramics

Next week, she’ll be revamping the display with a back-to-school theme, she said.

“I already have my Christmas window planned and I can’t wait to see the little kids stop and look at it,” Braid said.

When designing the store’s interior, Braid said she tried to merge the “old” with the “new,” honoring the history of design while adding a modern twist. She installed deep brown wooden shelving on the walls of the store and displays her candle inventory on a pair of clean white ledges.

With its white-stained wood paneling, Augusta Rose feels like a shop that could be found along a beach boardwalk — something that Braid dreams will one day be a reality. Opening a second location near the water is in her three-year plan, she said.

She thought for a second.

“That may actually be a five-year goal, not a three-year,” she said, laughing.

In the meantime, however, Braid said it feels good to be part of a community again. Just about every day, a gentleman walks past her shop with his dog. He always stops in to get his chocolate fix.

She wants Augusta Rose to be a space — as the tagline for her shop reads — “where you can always find sunshine.”

“I just want to make people happy,” she said. “Even if they don’t buy anything. I just want it to be a nice little oasis where they smile.”

This shop looks like a great addition to Downtown Frederick. I can't wait to come shop. Is there a Facebook page or a web site for the business?

Look at the second photo. It’s right there.