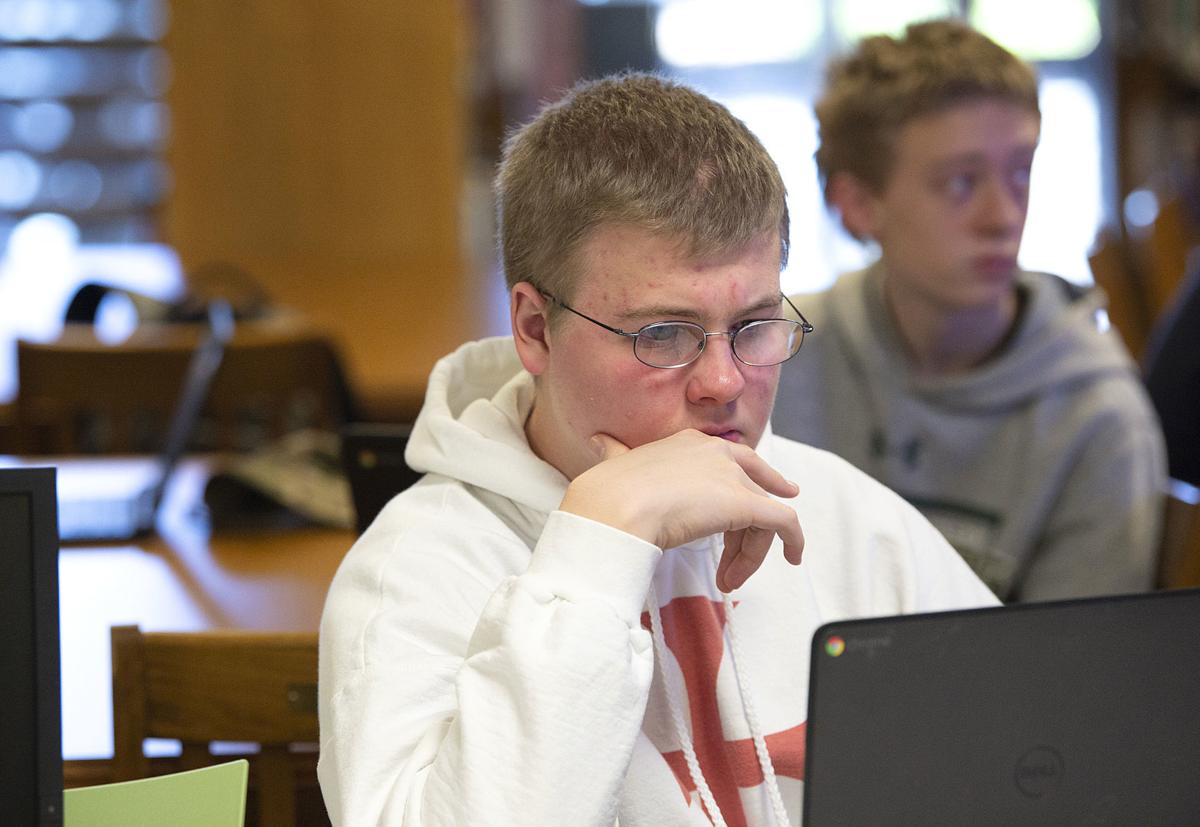 Brunswick 10th-grader Nathan Stephens studies his “Budget Challenge” work on his laptop, which puts students through a 10-week financial simulation. 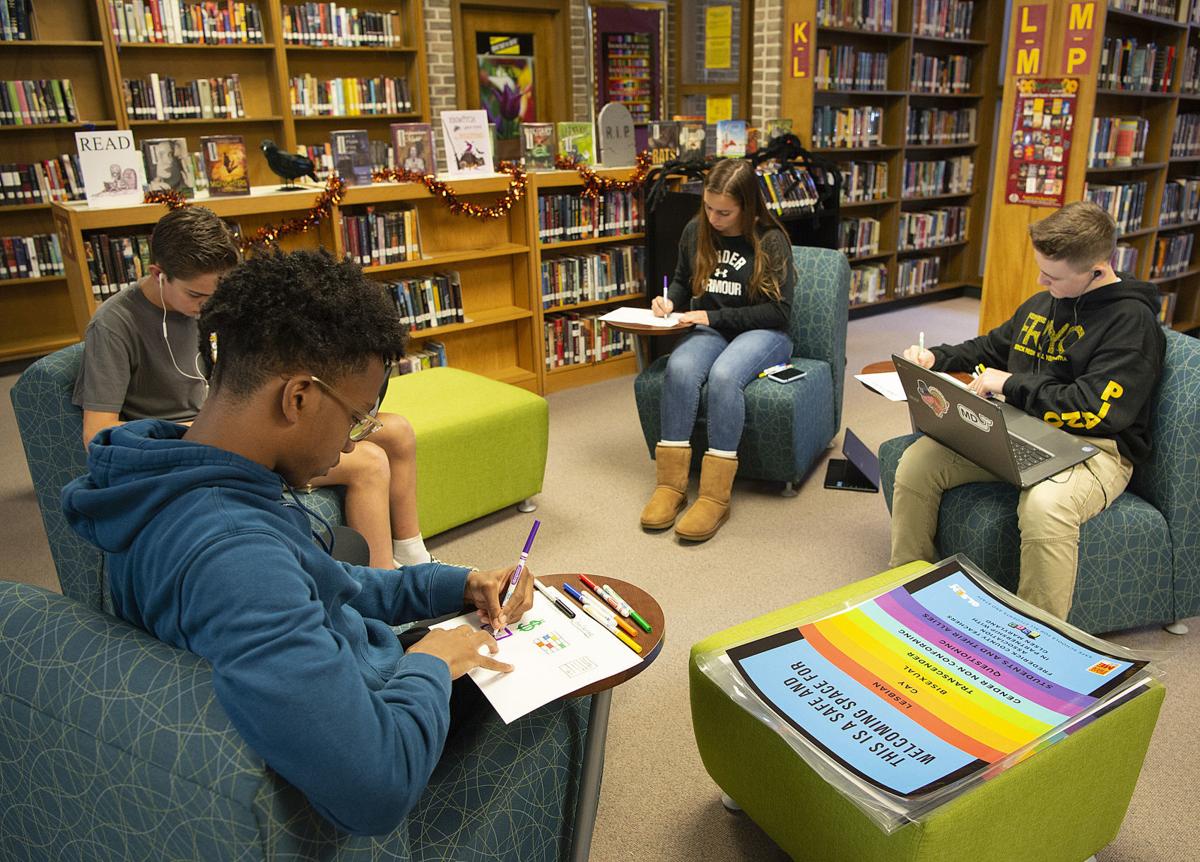 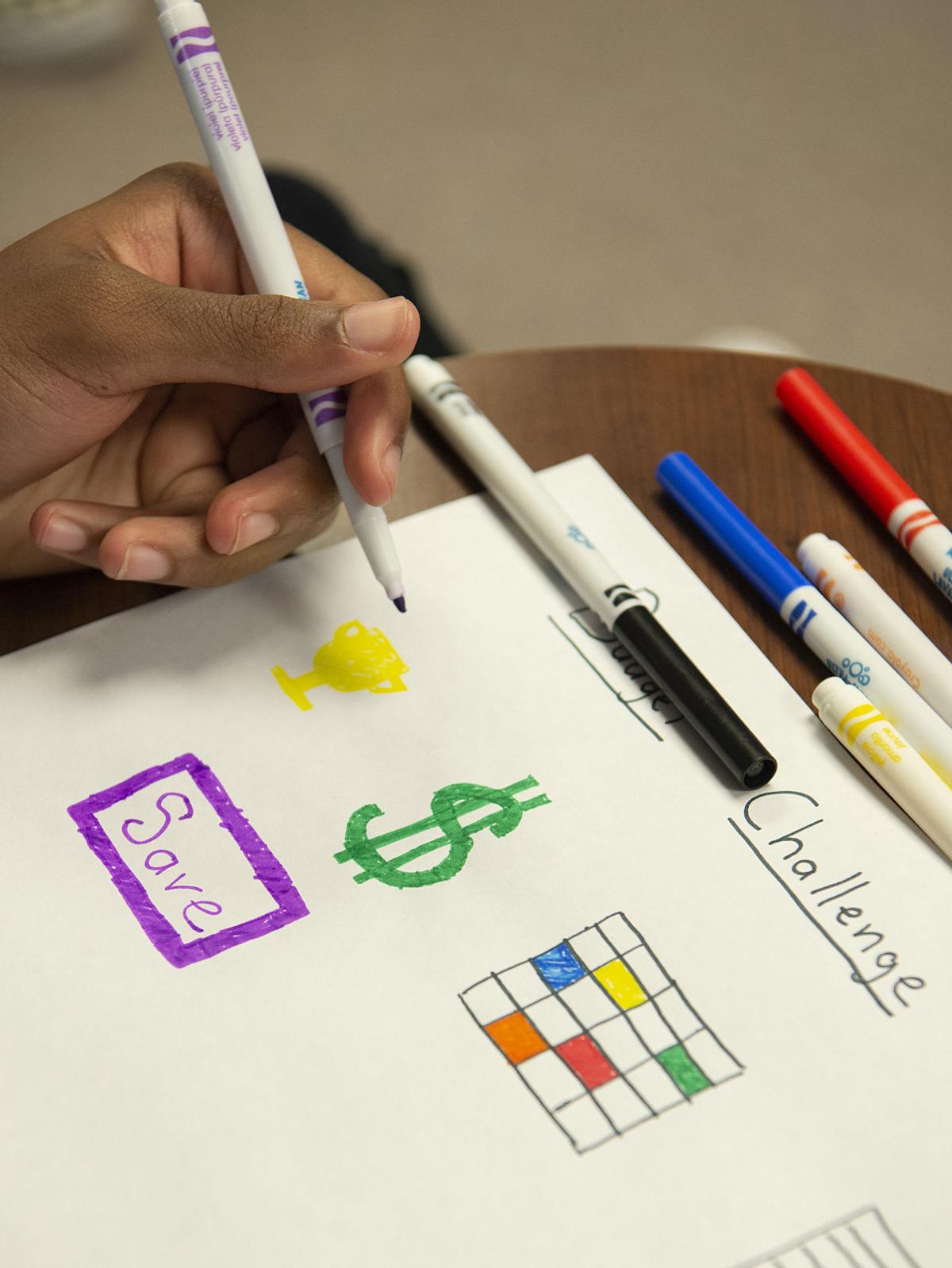 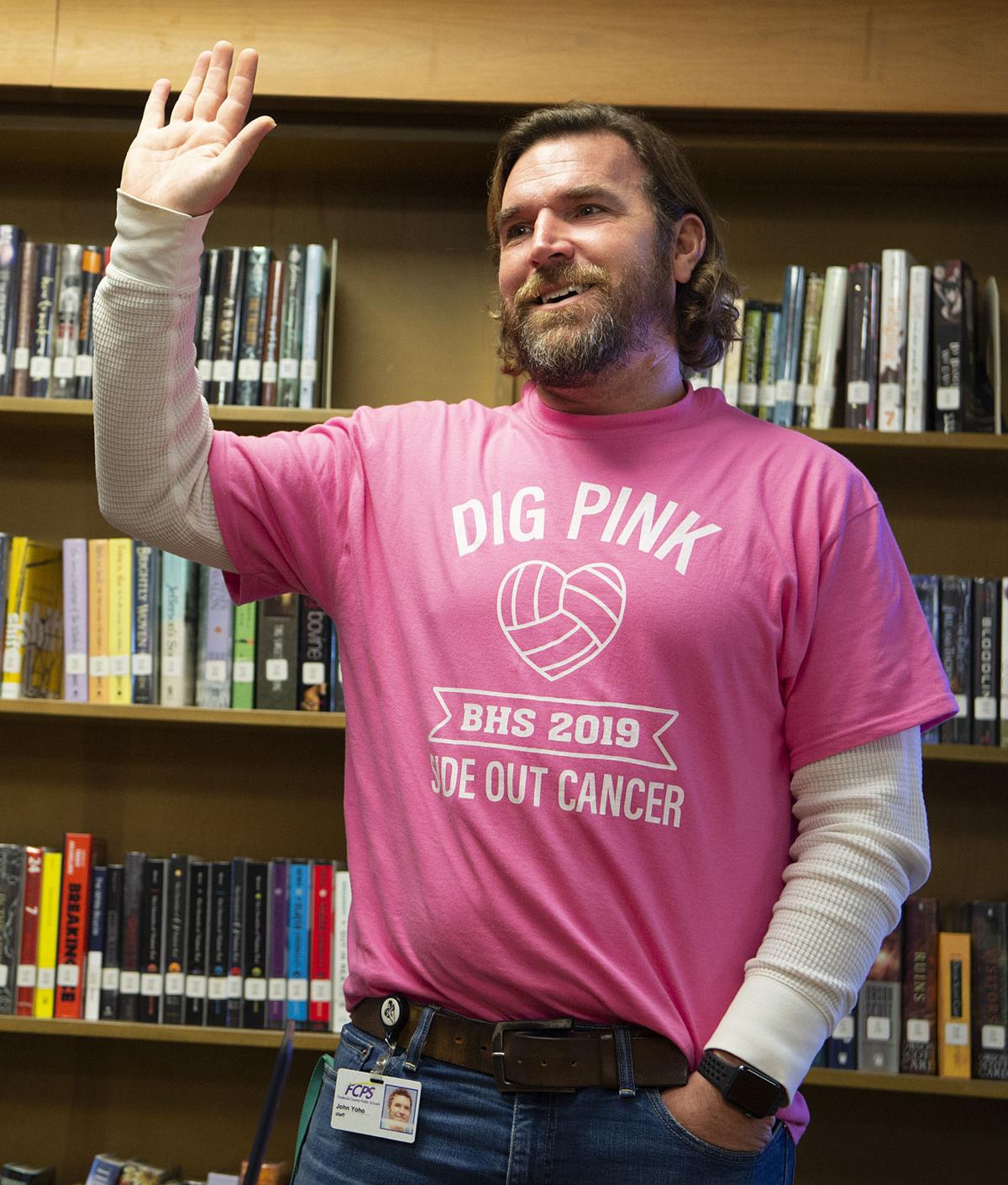 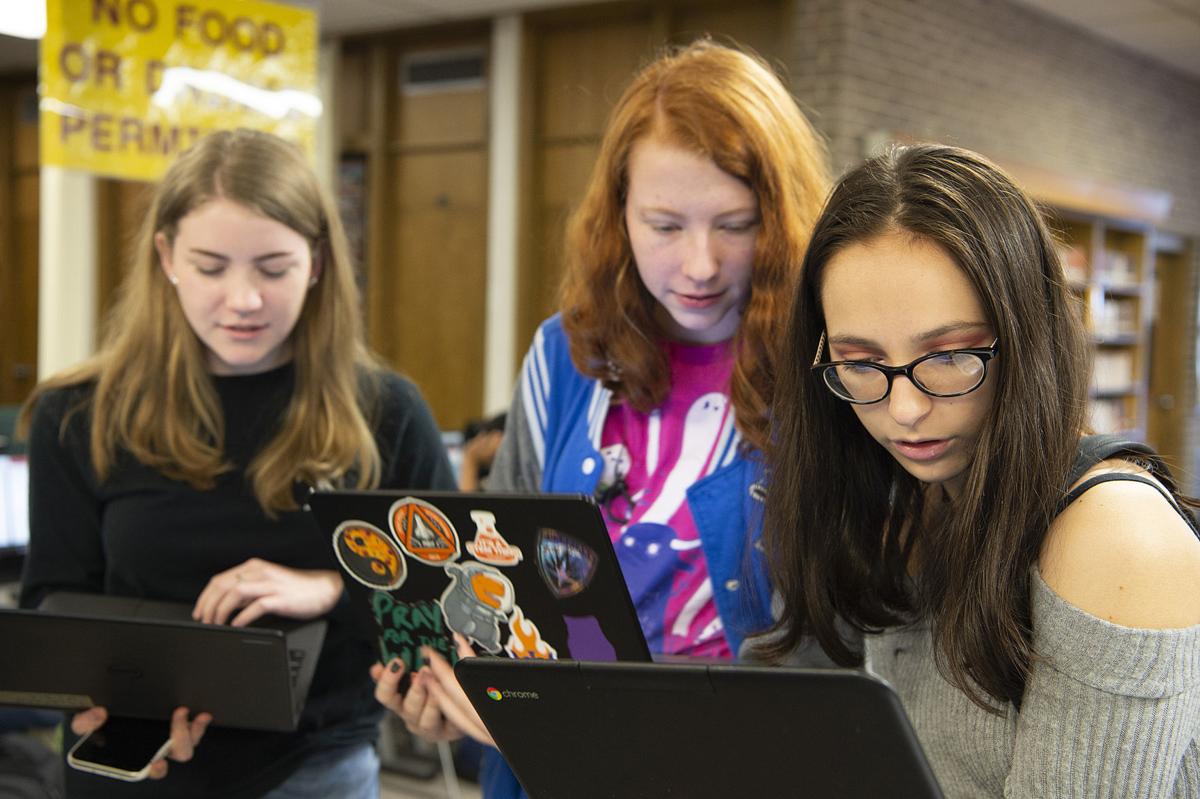 Three Brunswick High School students work on the “Budget Challenge” on their laptops. From left are Sadie Batson, Ann Davies and Evelyn Ellison.

Brunswick 10th-grader Nathan Stephens studies his “Budget Challenge” work on his laptop, which puts students through a 10-week financial simulation.

Three Brunswick High School students work on the “Budget Challenge” on their laptops. From left are Sadie Batson, Ann Davies and Evelyn Ellison.

Graduates from Frederick County Public Schools will not only leave with a diploma but also a sense of how to manage their finances.

FCPS requires all high school students to take a financial literacy course before graduating and almost all those courses include an exercise called the “Budget Challenge,” which puts students through a 10-week financial simulation.

“It’s a great simulation tool for students to interact with online banking, have the opportunity to budget and pay bills in an environment where if they make a mistake, they’re not losing real money,” said Brunswick High School teacher John Yoho, who teaches financial and business courses.

“I feel like it’s a really good way for people to know what it’s like in the real world,” said Murphy Nichols, a 10th-grader at Brunswick High who is participating in the Budget Challenge as part of his Microsoft Certification class.

The simulation has been running in schools for a few years now, according to Norm McGaughey, but this year the classes are bringing in more conversations about digital disruption and modern banking methods to fit in with what students are seeing outside the classroom.

Yoho said that while students today have more access to banking at their fingertips, they still don’t necessarily know how to manage their money.

“The opportunity to be in touch with how much money you have is more accessible than it was eight or 10 years ago,” Yoho said. “But students haven’t learned the importance of managing their finances. ... [The budget challenge] is intended to show them that.”

In addition to the simulation, students are also learning how modern tools such as online banking can disrupt an industry or business.

“It’s bringing to students’ attention that we have these powerful devices that are primarily good, but what havoc is it causing for businesses?” Yoho said.

He has his students do research and analyze businesses that have failed such as Toys R Us and Blockbuster and how modern technology contributed to their failures.

Students also have the opportunity to design their own bank based on what they would like to see from a financial institution. They are encouraged to include factors that would persuade them to go to a branch rather than just banking from their phones.

McGaughey showed past design examples. One student designed their bank like a Starbucks, where people could come to do work, get a cup of coffee and check on their finances. Another designed theirs like an Apple Store.

The financial literacy courses also include discussions about larger financial management strategies such as 401(k) plans and investing.

Korbin Shoemaker, teacher specialist for CTE, said the school system shifted away from teaching these concepts from a textbook and incorporated them into the budget challenge because it was easier for students to grasp.

“You take a ninth-grader — what bills do they have? They may not even have a job yet, so the challenge is you’re teaching them concepts like retirement savings that they have no exposure to just because of their age,” Shoemaker said. “The budget challenge is giving [them] exposure to these things.”

Yoho said all these approaches are helping students to become more prepared as they leave high school.

“I have had my own financial mishaps ... and I think a lot of those came from a lack of education. It was trial and error,” Yoho said. “With these courses we can have these conversations ... with students in a simulation or game-like environment and then they’re better off than I would have been coming out of high school.”

“It’s definitely good to go through this simulation before you start having your own apartment and your own loans and bills and stuff and you won’t have any idea what you’re doing,” she said. “This kind of gives you kind of what you should expect when you get out.”

This is an excellent idea!

I'm glad to see our taxes used in this way.

Far too many people do not have a clue and get taken advantage of financially. In some cases it means they must work into their 70s, or perhaps never have a retirement at all -- and it's usually avoidable.

Take admin/management fees for example. Many people do not realize that they can invest directly with a company like Vanguard or T. Rowe Price and pay next to nothing in fees -- as little as 0.04%, or even 0%. In comparison, a typical fee of 1-2% can literally cost the average investor hundreds of thousands of dollars over the 30-40 years they will likely be working and investing.

I hope that is covered in this course.

Something else that should be emphasized is delayed gratification. People are so much better off always paying off credit cards every month. Sure, sometimes there are legit expenses that may take a while to pay off, but too many people get into the trap of buying stuff they really don't *need*, and then paying exorbitant interest on it for months or years. Once they get 'behind the 8 ball' like that, it's hard to dig out.

I'm reminded of this SNL skit:

Perhaps the members of the Kirwan Commission should take this course.