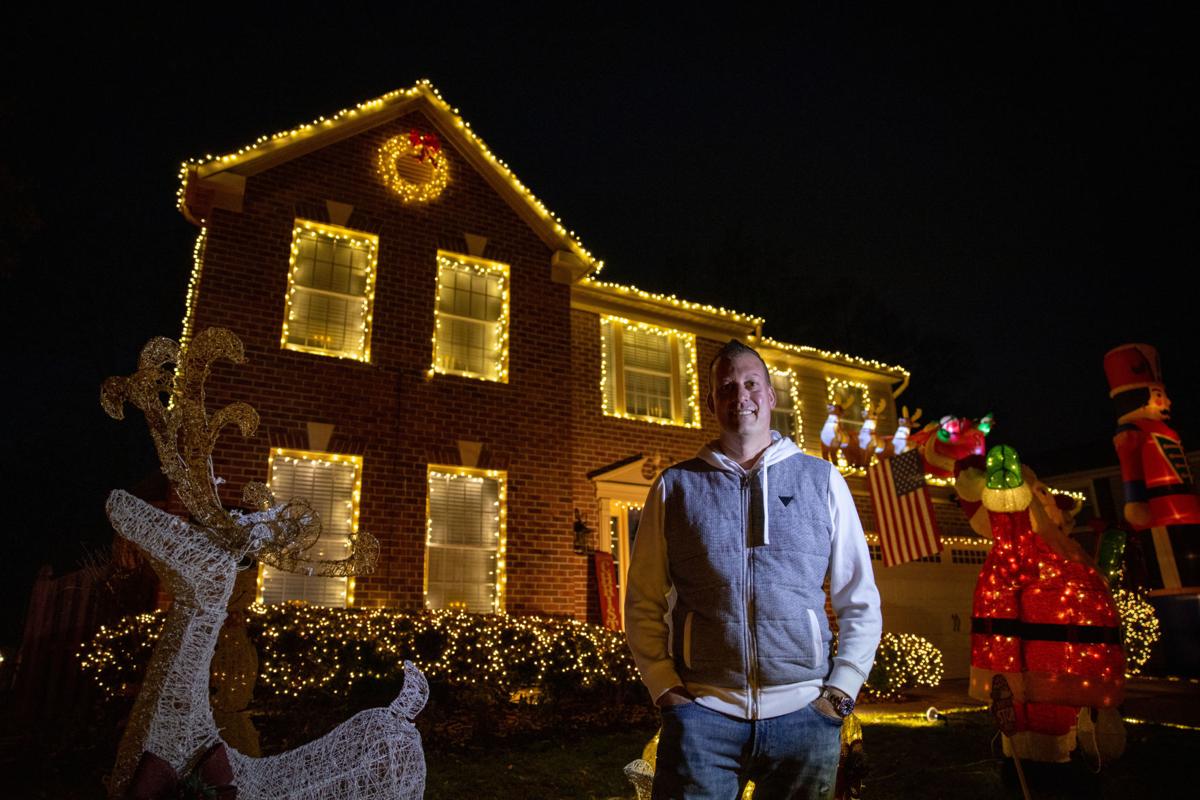 The home of Chris Underwood in Crofton, Md. MUST CREDIT: Photo for The Washington Post by Evelyn Hockstein 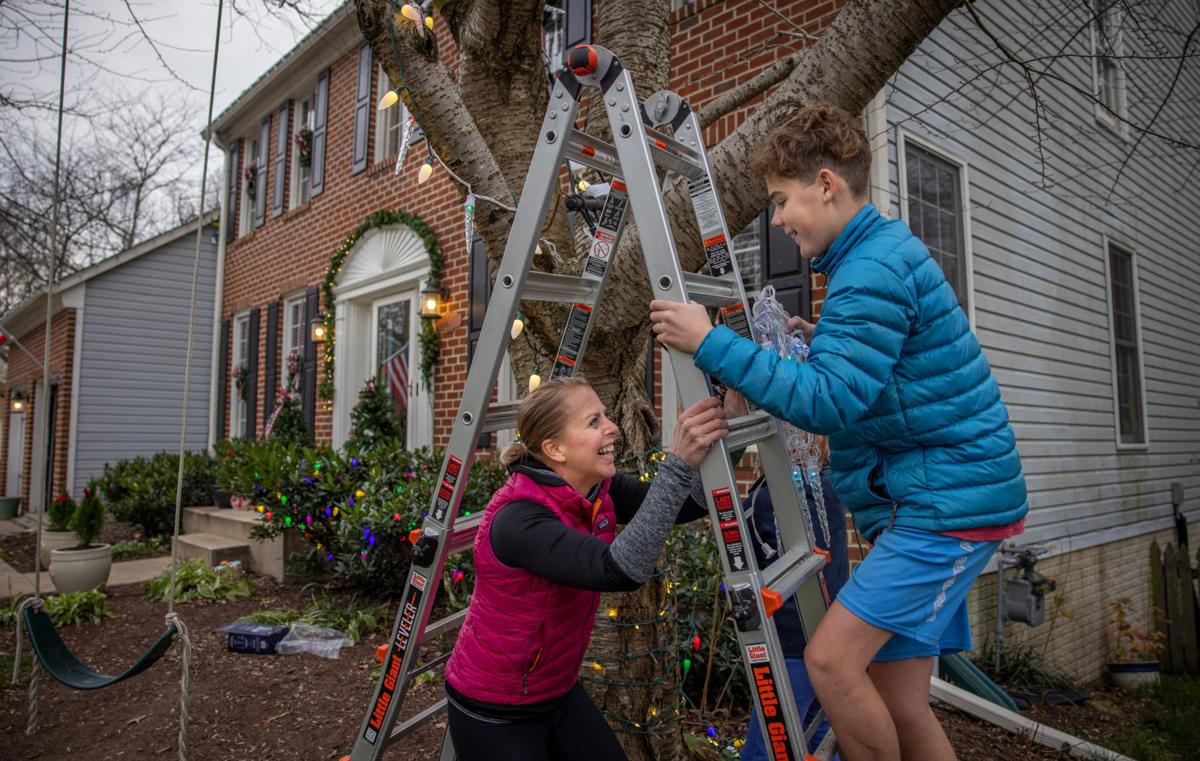 Julie Zimmer and her son, Colter, 13, wrap their tree in lights. MUST CREDIT: Photo for The Washington Post by Evelyn Hockstein 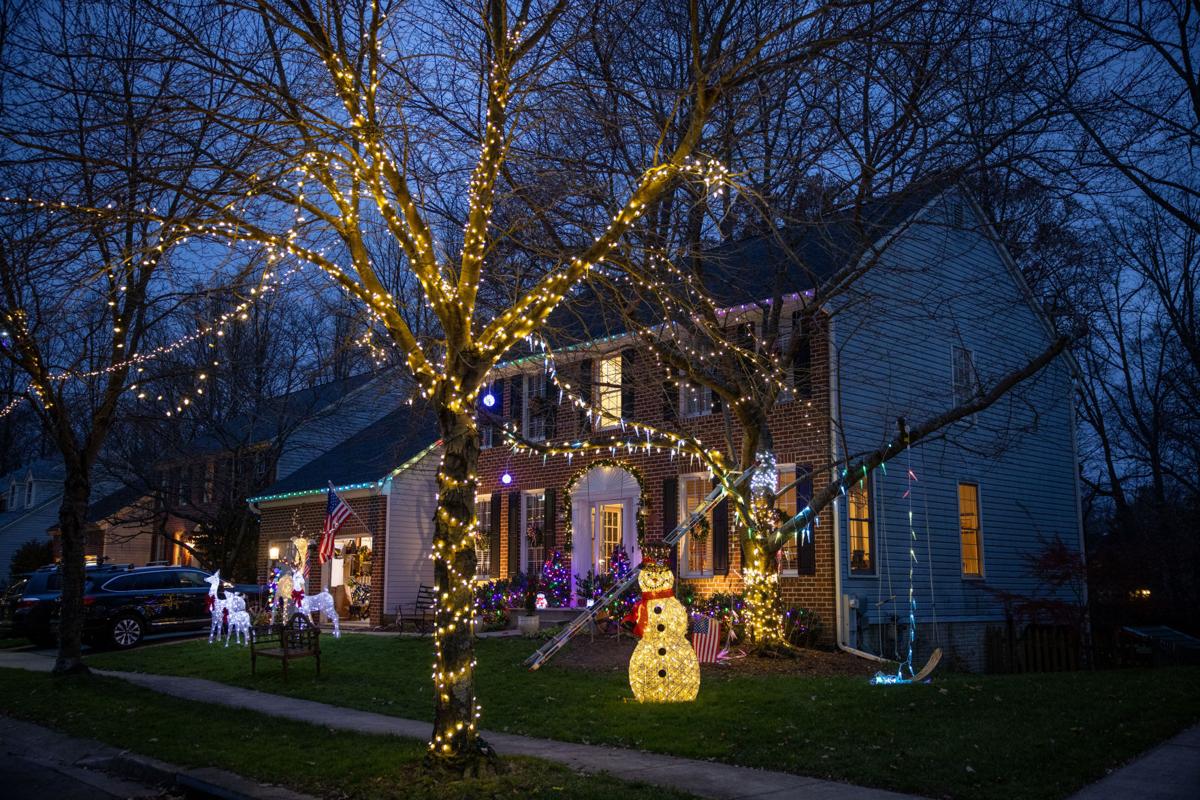 The Zimmer family started decorating for Christmas a bit early this year — a week before Halloween. 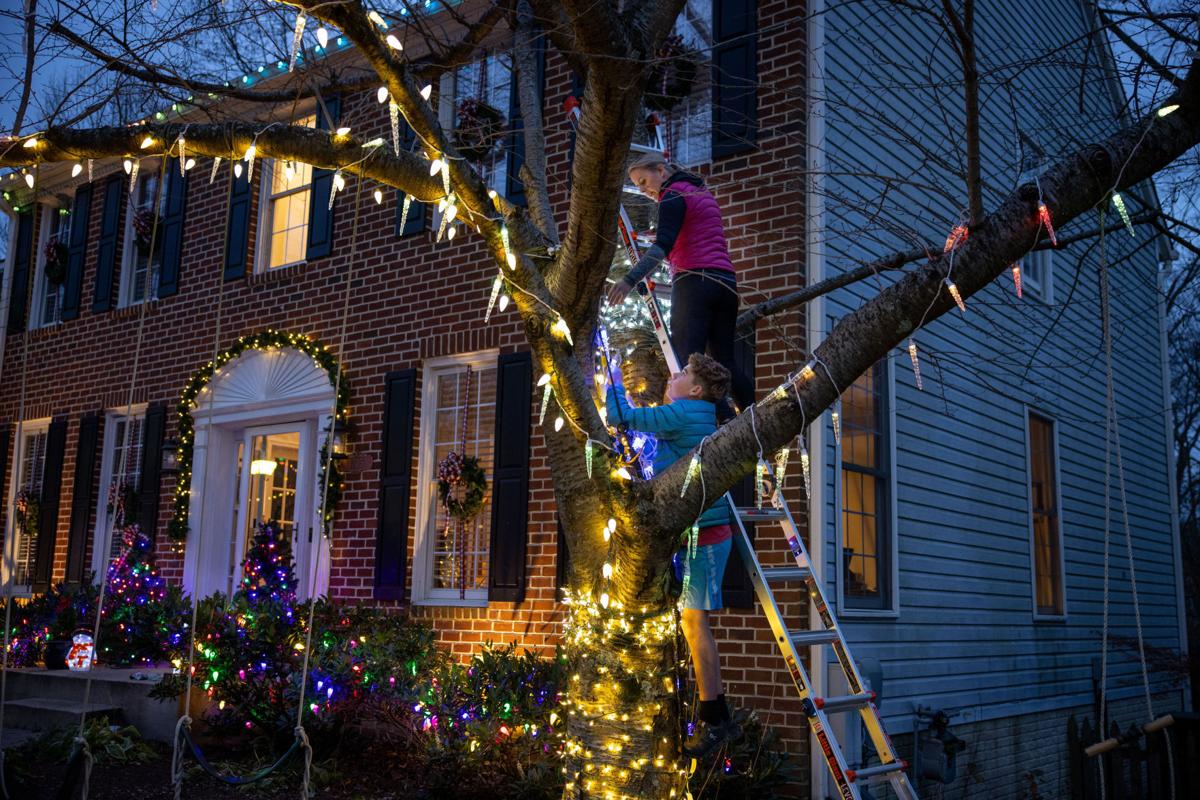 Colter Zimmer, 13, puts up Christmas lights with his mom, Julie Zimmer, at their home in Crofton, Md., on Sunday. MUST CREDIT: Photo for The Washington Post by Evelyn Hockstein

The home of Chris Underwood in Crofton, Md. MUST CREDIT: Photo for The Washington Post by Evelyn Hockstein

Julie Zimmer and her son, Colter, 13, wrap their tree in lights. MUST CREDIT: Photo for The Washington Post by Evelyn Hockstein

The Zimmer family started decorating for Christmas a bit early this year — a week before Halloween.

Colter Zimmer, 13, puts up Christmas lights with his mom, Julie Zimmer, at their home in Crofton, Md., on Sunday. MUST CREDIT: Photo for The Washington Post by Evelyn Hockstein

In a typical year, Julie Zimmer’s family would turn on their Christmas lights after Thanksgiving. But in the wake of a contentious presidential election, in the middle of a pandemic that appears to be ballooning by the day, the Zimmer household in Crofton, Md., started hanging their Christmas lights earlier than ever: a week before Halloween.

Darkness comes early these days. The coronavirus pandemic has upended the holiday season in the Washington region. Cases are surging across the nation. Maryland, Washington D.C. and Virginia have announced tighter pandemic-related restrictions. Annual holiday rituals, such as the National Christmas Tree Lighting and the National Zoo’s ZooLights display, have been altered or outright canceled. Amid all this, families are digging into their storage containers earlier than ever to follow through on one part of the holidays they can control: turning on the Christmas lights.

“It’s been a hard year,” said Zimmer, a lawyer for the federal government. “We’ll all have to do things to keep our spirits up, together.”

Once their decorating is done by the end of the week, the Zimmers’ front lawn will feature four reindeer, three snowmen and a light-up dog — but no inflatable decorations. Inflatables is where Zimmer draws the line. The family favors twinkling lights. They have multicolor bulbs to trim the frame of the house, warm white lights to wrap around the trunks of trees and icy white LED lights to stretch across the street to their neighbor’s yard.

“It just makes it look like a fabulous winter wonderland,” Zimmer said, adding that her husband, Justin, made sure the trash trucks can still pass under the lights dangling over the street.

A short car ride away, down Urby Drive in Crofton, Chris Underwood lives on a street that goes big and bright for the holiday season. The families in six neighboring homes have one connecting rope of lights between all of them. Underwood, 41, an independent real estate investor, said his family has been coordinating with the other households for three years now.

“At least some things are remaining steady out there in the world,” Underwood said. “Like, our six houses decorating for Christmas, you know?”

The coronavirus pandemic has hit the nation’s small businesses hard this year, but companies that sell holiday decorations are seeing an early uptick in demand. At the Virginia Christmas Lighting and Decor Co., which hangs holiday lights at people’s homes, co-owner Michael Sfreddo said he received his first order in August and started installing lights in September. Normally, he doesn’t start hanging lights until the end of October.

Sfreddo and Jeff Sears, a manager for Outdoor Lighting Perspectives in D.C., said their business has already doubled from last year and they’ve hired numerous temporary employees. Sfreddo said his company has received four times the number of inquiries it had last year.

“My body right now feels like it usually feels on Christmas Eve when I had just been working nonstop for two months,” Sfreddo, 48, said last week. “I’m already to the point where I want to collapse, and it’s only been November.”

Paula Thalis, 66, manages the Christmas decoration stores A Christmas to Remember in Annapolis and Tysons Corner. Thalis called it “a horrible year” for both stores because of the pandemic. But that changed about a month ago.

“Sales are higher than they normally are at this time of the year,” Thalis said. “Usually, we don’t get real busy until after Thanksgiving.”

And, what are customers buying? Pandemic-themed ornaments. Thalis said both stores are selling out of decorations emblazoned with masks, toilet paper, hand sanitizer and even Anthony Fauci.

“I looked at them the first time and I thought, ‘Oh, my God, who’s going to want to remember this?’ “Thalis said. “But they’re the top seller in the store this year.”

Thalis said she suspects people are buying the pandemic ornaments as memorabilia — not that anybody will forget the coronavirus pandemic anytime soon.

“That would be pretty much impossible,” she added.

At a time when people are encouraged to stay distant from others, Carpenter said, holiday lights can help bring a sense of community among neighbors and friends. A study from the Journal of Environmental Psychology also found people who hang holiday lights are perceived as more affable.

“Anything that we can add into this world right now that builds positive emotional states, that sort of feeds positive beliefs — those kinds of things are known to help build resilience,” Carpenter said. “We all need that right now. And as simple, or perhaps silly, as something like holiday lights going up earlier or going up in bigger form this year — it does help to create positive emotional states in people.”

As kid in Puerto Rico, Alejandro Bolívar-Cervoni always knew it was almost Christmas when his grandmother, Maria Rosa, began decorating their home with lights. Puerto Rico is where Bolívar-Cervoni celebrated Christmas most of his life, listening to music, enjoying homemade pasteles and ripping open boxes to find new toys.

But because of travel guidelines, Bolívar-Cervoni, a 29-year-old Web marketing and data analyst, is stuck alone in his Arlington, Va., condo. Trying to re-create the holiday fun that has been a staple of his life, he put his holiday lights up in mid-November.

Many of his decorations remind him of his family and childhood. There’s the artificial Christmas tree his aunt Kerry gave him when he moved to the United States in 2009. There are the 18 ornaments his late uncle Joe obtained while working for the U.S. Secret Service that have been passed through his family.

Now, Bolívar-Cervoni is starting a new tradition. He said he’s converting to Judaism, and while he still plans to celebrate his family’s long-standing Christmas rituals, he’s also lighting a blue menorah he got in Israel for Hanukkah.

“When I light those candles, when I have the tree, I just feel the energy of my relatives,” Bolívar-Cervoni said. “I feel like they are here with me, even though some of them are deceased.”

Some people around the Washington area said they started to unfurl Christmas lights earlier this month to take advantage of the unseasonably warm weather. Mike Gridley, 39, an attorney for the U.S. Patent and Trademark Office, said he texted his neighbors in Petworth to see if anyone would disapprove of his decision to decorate a few weeks early.

“Everybody was like: ‘You have to do it. Please do it,’ “ Gridley said. “Once people encouraged me to do it, I didn’t look back.”

Gridley bought a pink artificial tree with pink lights to decorate the front of his home in Northwest Washington. He said two of his neighbors told him the new tree on his porch is “a beacon of hope for the end of 2020.”

Michael Madowitz, 41, an economist at the Center for American Progress, said that a weekend setting up holiday decorations was a great outdoor activity for his two kids, Roxie, 5, and Gidget, 7.

Madowitz now hosts eight inflatable decorations, celebrating both Christmas and Hanukkah, on the front lawn of his rowhouse near Gallaudet University in Northeast Washington. Santa and his reindeer welcome guests with a “Merry Christmas to All” arching above the walkway to their front door. To the side sits a Dalmatian nicknamed Snoopy who is holding a Star of David. Madowitz said he hasn’t heard from any neighbors who disapprove, or dare to call his inflatables garish, though he knows some people have strong feelings about these things. He’s not too worried about it.

“This year has already been very over-the-top in a lot of not-fun ways,” said Madowitz. “If people putting up their lights too early is the worst thing that’s happened to you in 2020, tell me how to get there.”